A drive-by shooting wounded a federal security officer outside the U.S. courthouse in downtown Phoenix on Tuesday, and a person has been taken into custody, authorities said.

Police also released a photo of a silver sedan that was spotted leaving the area of the Sandra Day O'Connor U.S. Courthouse at 400 W. Washington St. Several hours later, the FBI announced an individual was in custody in connection with the shooting.

Phoenix City Councilman Sal DiCiccio said in a statement that “multiple shots were fired at the officer who was struck in the vest.”

The officer is court security officer who works for the U.S. Marshals Service and the officer was expected to recover, said a law enforcement official who spoke on condition of anonymity because the official was not authorized to discuss the investigation publicly. 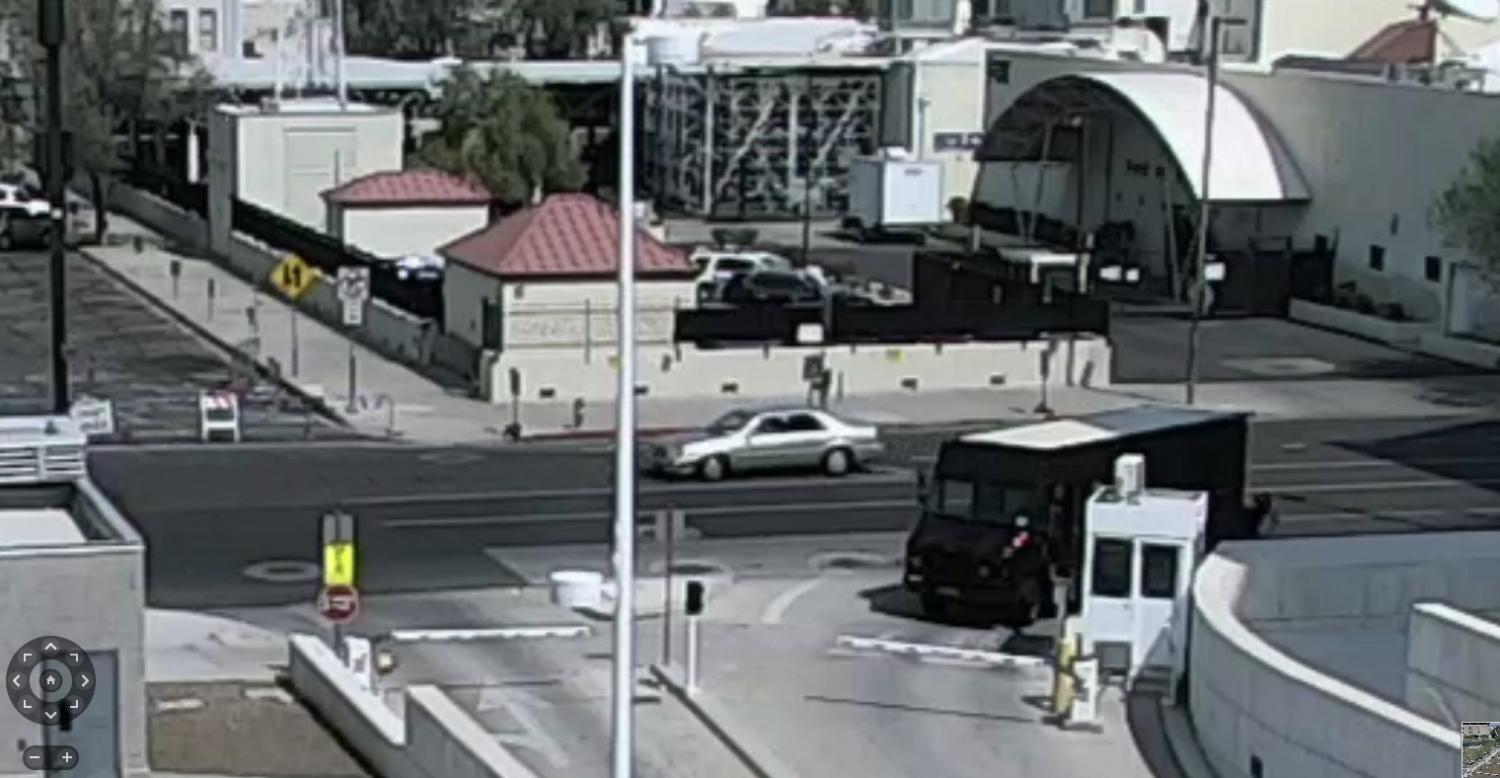 Phoenix Police Department
Phoenix police released a surveillance photo of the vehicle that was seen leaving the area.

The FBI is investigating the incident as an assault.

Law enforcement officials did not release any additional details but said there is no information to suggest there is a continued threat to public safety.

The shooting came after the weekend ambush of two Los Angeles County deputies who were in their parked police vehicle when a man walked up to the passenger’s side and fired multiple rounds.

The deputies were struck in the head and critically wounded, but both are expected to recover. The gunman hasn’t been captured and a motive has not been determined.

Federal courthouses have been flashpoints for recent violence, but it's not clear who shot the officer in Phoenix or why.

In June, a federal security officer was shot and killed and his partner was wounded outside the federal courthouse in Oakland as they guarded the building during protests over racial injustice and police brutality. An Air Force sergeant was charged with the shooting, and prosecutors say he had ties to the far-right, anti-government “boogaloo” movement and used the protest as cover for the crime and his escape.

During demonstrations in Portland, Oregon, protesters and federal officers clashed at the federal courthouse, where people set fires and tossed fireworks and rocks, while federal authorities sprayed tear gas and made arrests.

STEVE GOLDSTEIN: And Jimmy, in other law enforcement-related news, a shooting outside the O'Connor federal courthouse in downtown Phoenix [Sept. 15]. One person was injured. Do you have more details about the incident right now?

JIMMY JENKINS: Phoenix police say just before noon a court security officer was shot and transported to a hospital with non-life-threatening injuries. There are lots of security officers at the Federal Courthouse, Steve — they walk the perimeter of the building, they are inside the courthouse screening visitors as they enter, they are in the courtrooms making sure you aren't recording if you aren’t supposed to and you’re following the rules — so the security officers are familiar to anyone who has had business in the federal courts. I was downtown just after the shooting, and I found that law enforcement had formed a barrier for several blocks around the federal courthouse. Taking this very seriously. Streets in every direction were closed for several hours. So it was a really large police presence, and it had an impact on downtown yesterday afternoon.

GOLDSTEIN: And Jimmy, any extra information about the victim or the suspect?

JENKINS: No, we haven’t had any updates on the victim. It's not clear the nature of the shooting, other than it was described as resulting in a non-life-threatening injuries. Directly after the incident, police released a photo of what looks like a silver or gold sedan that they were looking for. Then just a few hours later, the FBI announced an individual was in custody in connection with the shooting. So the FBI says it’s now in charge, and it's investigating the incident as an assault. Law enforcement officials did not release any additional details, but they said there is no information, Steve, to suggest there is a continued threat to public safety.

GOLDSTEIN: And Jimmy, finally, soon after the shooting, Phoenix City Councilman Sal DiCiccio tweeted about the incident, saying, “Make no mistake, this is a direct result of the extremist anti-police attacks we have seen from BLM and Antifa across the country.” And then Congressman Paul Gosar then chimed in saying, “In Joe Biden’s lawless America this will be the norm.” So hyperbole, but Jimmy, is there any indication that their assumptions of the motive for this incident are accurate?

JENKINS: No. The Phoenix police are not commenting — they are directing press questions to the FBI, who is overseeing the investigation, and they have not given a motive yet or said anything about the intentions of the person they have in custody. I reached out to Phoenix Black Lives Matter organizers to get a reaction to DiCiccio’s comment, and I haven’t heard back from them yet. There was a lot of speculation about — Steve, you remember the recent attack on a federal judge’s family in New Jersey. But in that case the attack was apparently related to the judge’s handling of the case. Sp we have to keep in mind that there are just tons of people who have business before this very powerful court every day — if that is even to say if it's even related to the court at all. So there could be any number of reasons or motives why someone might take this sort of action. But we will keep you updated as soon as we learn more information that has been confirmed by the law enforcement agencies handling this investigation.

GOLDSTEIN: Yeah, I'm sure you will. That is KJZZ’s Jimmy Jenkins. Jimmy, thanks as always.