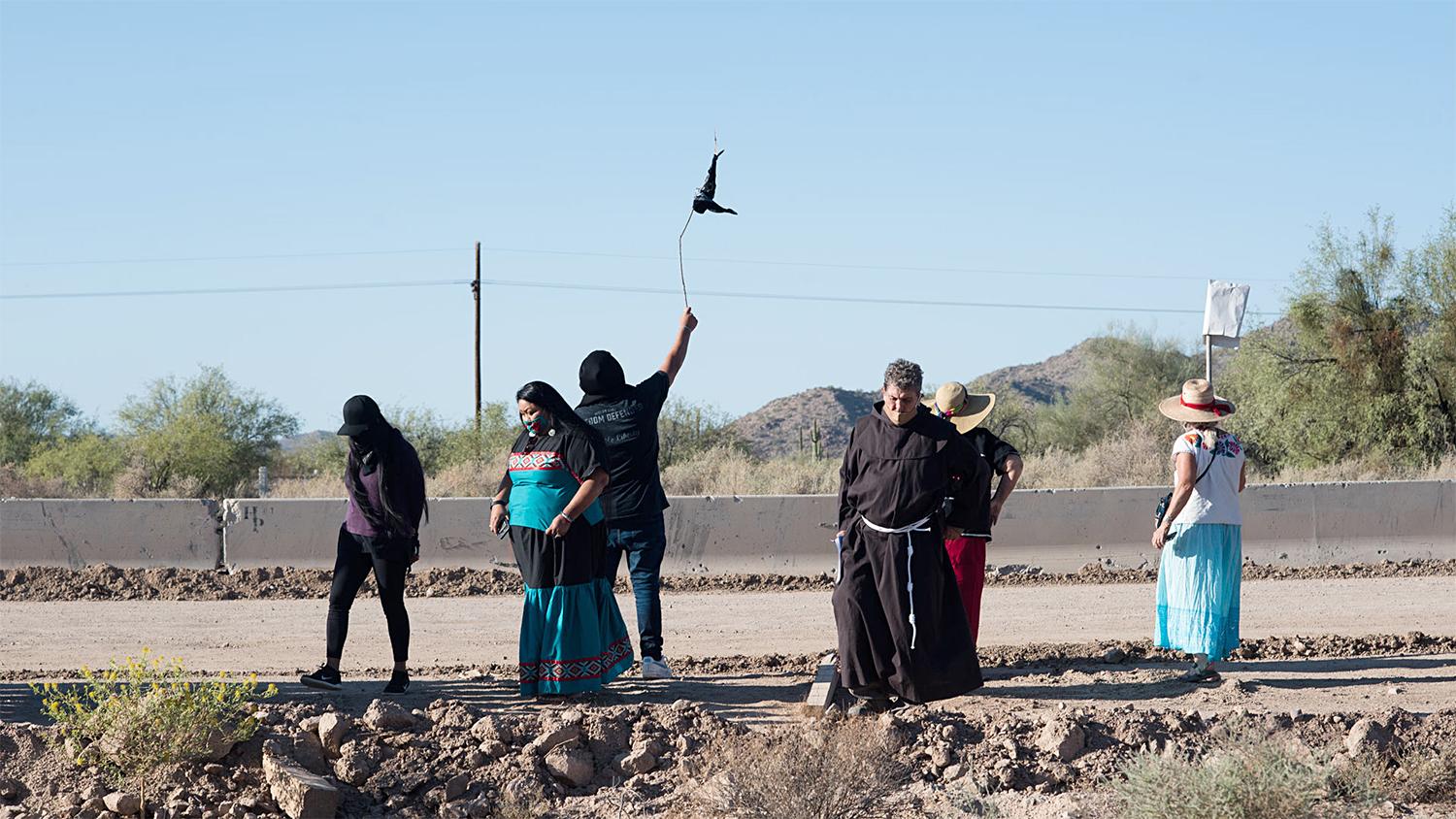 Alisa Reznick/AZPM
Tribal members and supporters gather in front of the construction line to wave down O'odham runners coming from Sonora ahead of a cross-border ceremony at Quitobaquito Springs on Sept. 27, 2020.

LAUREN GILGER: But first, we return to our Southern border, where Indigenous protesters continue to clash with federal authorities as construction of the Trump administration's border wall carries on. This week, the National Park Service announced a road closure at Organ Pipe Cactus National Monument that would cut off access to a rare spring that's sacred to many tribes. And the move is prompting Indigenous organizers to return to the construction line in defiance of the closure. We're joined now by Alisa Reznick of Arizona Public Media in Tucson, who has been covering this story. Good morning, Alisa.

ALISA REZNICK: Good morning, Lauren. Thanks for having me.

GILGER: Thank you for coming on. So I want to start with the latest news here — the closure of the road access to the spring. We had you on The Show last week to talk about these protests and now this closure seems like an escalation. When did this happen and why?

REZNICK: So the Park Service announced the closure on Monday. The statement lists a number of routes that are closed Quitobaquito Springs and cites public safety concerns over heavy machinery and increased construction traffic. Quitobaquito is an ancient freshwater source that drains into a pond along the border. It's part of the ancestral territory of the Hia-Ced O'odham and the closure follows a series of demonstrations led by O'odham as border wall construction closes in. Earlier in September, two Hia-Ced O'odham women were arrested along this stretch for climbing into machinery. And later on that month, Border Patrol and the Park Service tried to forcibly break apart a human chain of demonstrators along the same stretch that shut down construction for more than five hours. Hia-Ced O'odham are not federally recognized, but they've lived at Quitobaquito all the way until the 1950s. People still go there for ceremonies and to visit burial sites nearby. So now there's a concern that those won't be able to happen anymore because of the closure.

GILGER: Right. What did Border Patrol and the National Park Service have to tell you about the reasoning behind this closure?

REZNICK: A Park Service spokesperson said the closures are done at the request of [U.S.] Customs and Border Protection. That agency also released a statement Tuesday essentially saying they were working with land management agencies to address safety concerns amid the construction. Then on Wednesday, just two days after the closure and when O'odham demonstrators defied the order and returned to the site, the agency released another statement, this time and explicitly referencing the construction line demonstrators as drivers for this closure. But there's still a lot of questions about how or if tribes will be able to access the spring for ceremonial purposes. A spokesperson for the Park Service said the park is discussing a tribal access plan with the Tohono O'odham nation, and a Hia-Ced O'odham elder told me that the Park Service called her after the closure to say that she and others would still be able to access the spring, but with advanced permission. So I think the closure caught people by surprise, and it's still unclear how the process will actually work in terms of access.

GILGER: So this closure, though, has not stopped people from going to the spring to protest, though. What happened [Sept. 30]?

REZNICK: Yeah, early yesterday morning, about 25 O'odham demonstrators returned to the site. And by 9 a.m., they were live on social media on the construction line — chanting, singing and refusing to leave the area. So construction was forced to a halt again because of the action. And groups are also calling on supporters to call the Park Service and demand that this closure be lifted. This network of organizers don't see themselves as as protesters, but as O'odham defending O'odham land. The Trump administration has waived dozens of environmental and cultural protection laws to build the wall, so a lot of people feel direct confrontations are the only way forward. You know, one Tohono O'odham, organizer I spoke to earlier in September, told me they've tried contacting representatives and speaking out in other settings against construction on ancestral lands, and it hasn't worked.

O'ODHAM ORGANIZER: This country broke its own laws to build this wall. Being pressured to go through the civic engagement process — it hasn't gotten us anywhere because here we are. We have to go and directly put our bodies on the front line to stop it ourselves.

GILGER: So at this point, is there any sign that construction of the border wall will be slowed or stopped by this, or are they still moving ahead?

REZNICK: Border wall projects are moving really quickly now. Aerial photos from the Mexican side of the border near Quitobaquito on Tuesday captured how much construction has moved forward even since O'odham gathered for a ceremony along that stretch on Sunday. So panels are being erected from both sides of the pond, and those will likely connect pretty soon in front of the site. Crews are out on weekends and throughout the day, and the proximity to the election is really accelerating this process. You know, not just here, but all along the border. The Trump administration has built ... almost 350 miles of wall so far, and aims for at least 450 by the end of 2020. So there's really a concerted effort to push these projects forward.

GILGER: All right. That is Arizona Public Media's Alisa Reznick joining us from Tucson. Alisa, thank you so much for your coverage of this.