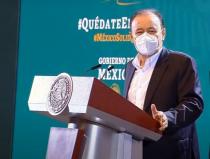 Last week, Mexico’s president announced public servants aspiring to run for office in the coming year must resign by the end of October, to avoid the appearance that their position is benefitting them in the election. Now, Mexico’s Security Secretary has announced his plans to resign.

Mexico’s Security Secretary Alfonso Durazo, from the Sonoran town of Bavispe, confirmed Thursday that he plans to resign from his post and return to Sonora to seek the governorship.

"Because of my political trajectory and my ties to the state, my interest would be to participate in this process with the desire to extend the politics of the fourth transformation in Sonora," he said during a Zoom conference on security, referring to President Andrés Manuel López Obrador's government, which he has said will be the fourth transformation in Mexican history.

Since becoming secretary of State nearly two years ago, Durazo has frequently visited Sonora to address growing violence in his home state. Though a pilot program he put into place last year has not been effective in curbing murders.

The confirmation that Durazo will run for governor comes as the president is visiting Sonora this weekend, including a stop in Durazo's hometown of Bavispe, where he is expected to give updates on the investigation into the November 2019 massacre of nine women and children by suspected cartel members.