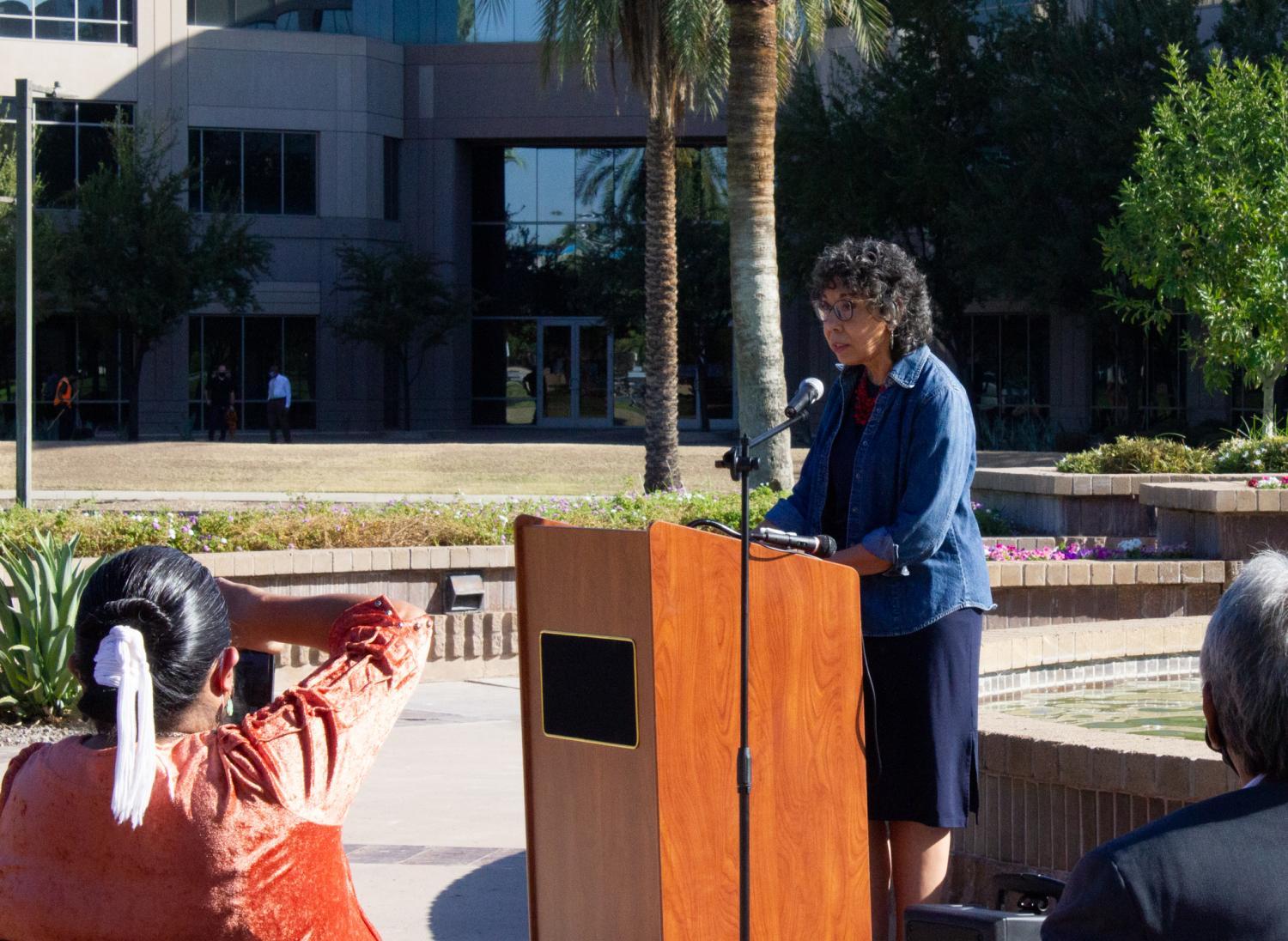 Scott Bourque/KJZZ
Michelle Benzenhoefer delivers a eulogy for her uncle, Maj. George Washington Biggs, at a memorial ceremony on Oct. 2, 2020. Biggs, an Arizona native, served as a Tuskegee Airman during WWII, and continued to serve during the Korean and Vietnam wars.

Fighter jets from Luke Air Force Base flew in a low missing-man formation over the state Capitol on Friday morning to honor the life and service of Maj. George Washington Biggs, an Arizona Native who served as one of the youngest Tuskegee Airmen during World War II.

Biggs, who died in September at the age of 95, was born in Nogales, joined the military in 1943 at the age of 18, and served during World War II, as well as during the Korean and Vietnam wars.

Biggs came from a long line of Black military pioneers. He can trace his military heritage back to the 68th Colored Infantry during the Civil War — his ancestors enlisted the same day President Lincoln allowed Black people to join. His grandfather served in the cavalry before World War 1 and was stationed in Nogales.

Biggs family
As a member of the Tuskegee Airmen, the first Black military aviators, George Washington Biggs trained for combat in WWII.

“George Washington Biggs The First, Major Biggs’ namesake and grandfather, enlisted in WWI," his niece, Michelle Benzenhoefer, explained during the eulogy at a ceremony outside the state Capitol. "Although we know nothing about his service, my uncle talked about how his grandfather’s service was an inspiration to him.”

The Tuskegee Airmen were the first Black pilots and airmen to serve in the U.S. military, at a time when both the military and society was heavily segregated. The 992 pilots flew more than 15,000 individual combat missions and are credited for destroying hundreds of enemy aircraft.

Retired Lt. Col. Dr. Nate Carr, who spoke at Biggs' memorial service, credited the Tuskegee Airmen with saving the lives of hundreds of aircrew members — who came home safely and had families.

"They only lost 25 bombers. The result? Maybe a million people are here in America today because the Tuskegee Airmen did their job,” Carr said.

The Tuskegee Airmen served in a segregated military for a segregated society, but their efforts helped lead to desegregation within the military and eventually within greater society, Carr said.

Carr told the story of a freak snowstorm over Italy in 1944. Seventeen B25 bombers with their 170 white crewmembers were forced to land, unannounced, at Ramitelli Air Field, where the Tuskegee Airmen were based.

"The white bomber crews were literally shocked to see nothing but Black pilots and ground crews," Carr said. "Nothing in their upbringing or their military training prepared them for such an encounter."

Initially, the bomber crews slept on their planes.  The two groups eventually started talking about flying, and conversations evolved into friendly chats about families, sports and education. One white pilot learned he went to the same elementary school as a Black pilot. 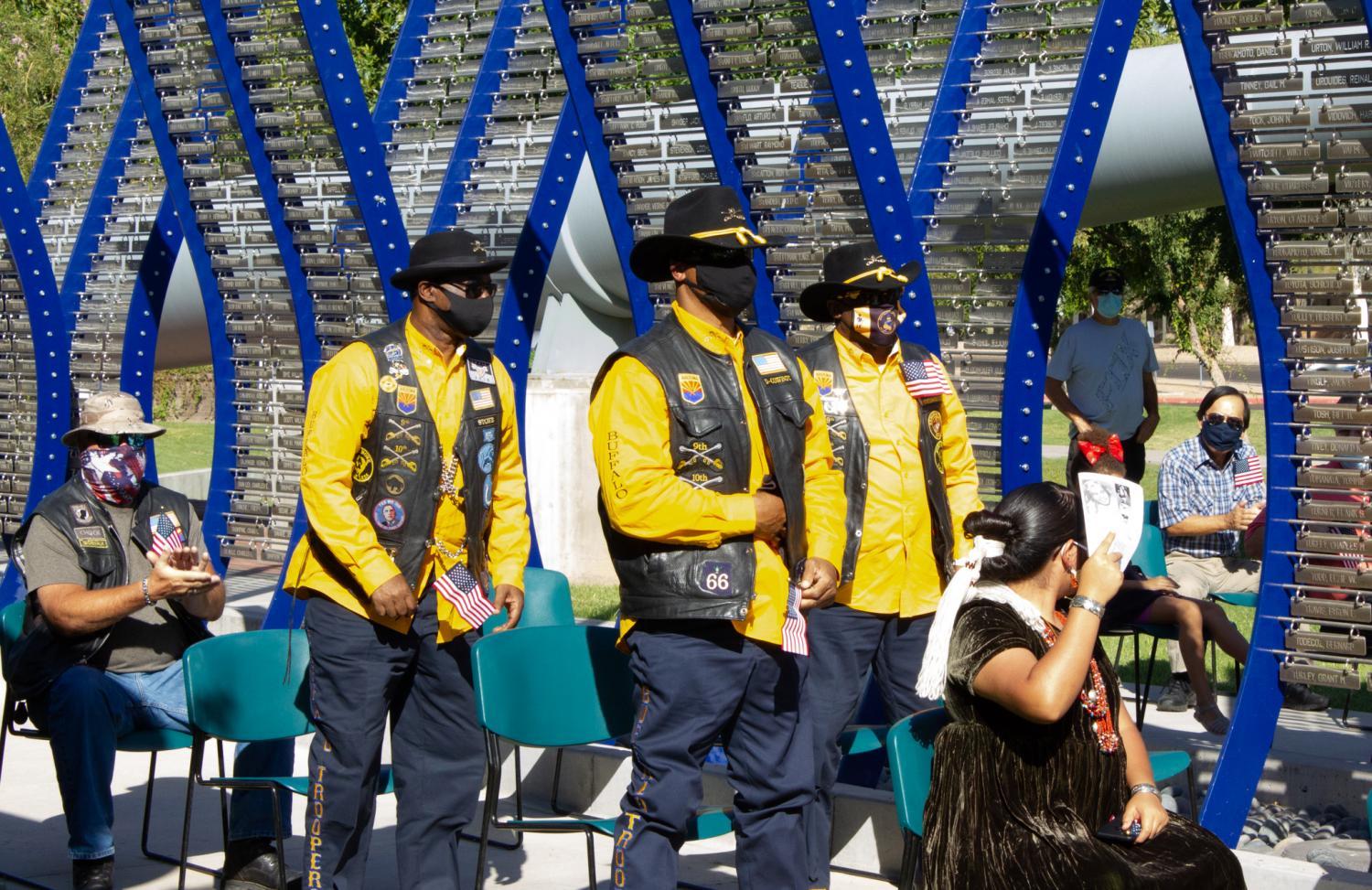 "After staying in Ramitelli for six days, segregation took a back seat to the American spirit," Carr said. "When the White pilots left for their home base, they and the lives of their Black counterparts were changed forever. The United States Armed Forces and America was given an exemplary model for changing race relations."

The desegregation of the military created opportunities for people like Rev. Charles F. Long II, who served in Vietnam as a Marine Corps colonel. He, along with members of the America's Buffalo Soldiers Re-Enactors Association, paid their respects to Biggs at the memorial service.

"I would not be here today representing the Long family if it wasn't for ... those who came before me like Mr. George Biggs," Long said.

“They didn’t play baseball, they played military. They played the stars and stripes. They played honor, respect, and discipline. When they were discriminated against even though they wore a uniform," Long said. "They were discriminated against, and told that you could only go into this bathroom for Black people. Forget the fact that you served in World War I, World War II, Korea, and Vietnam."

“George Biggs wouldn’t let you call him a hero,” Benzenhoefer said. “He would say ‘I just did the job I was supposed to do.’” 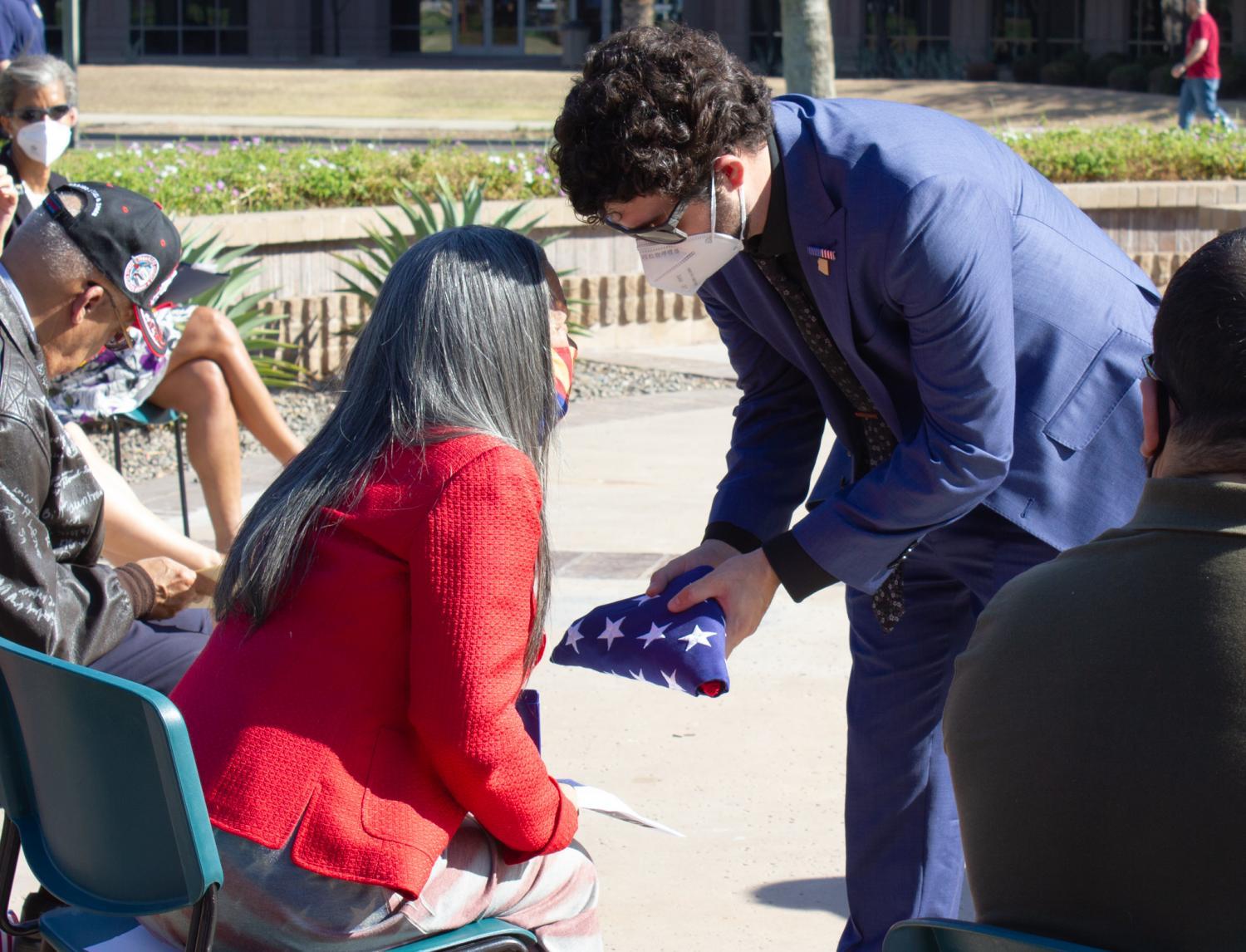 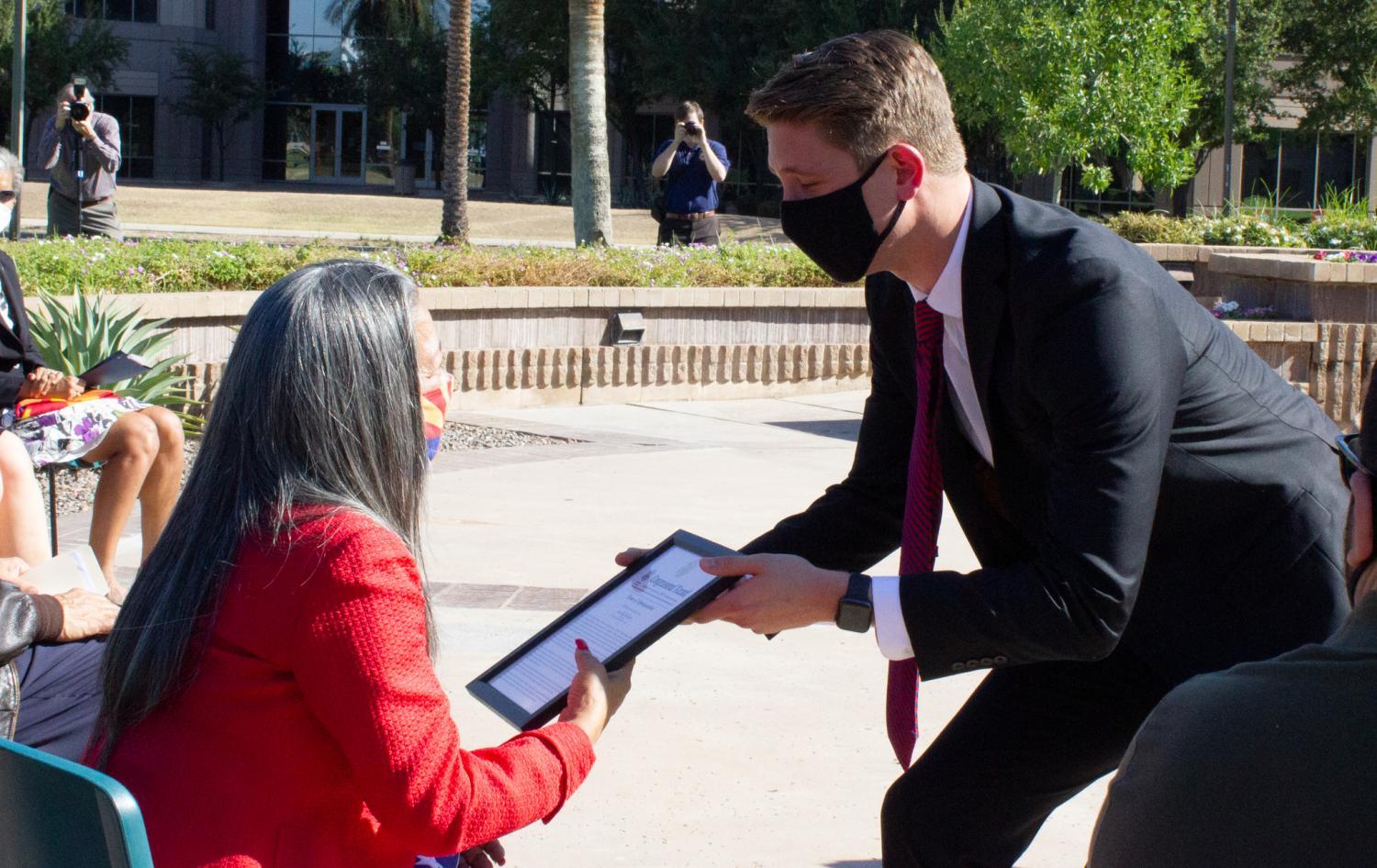 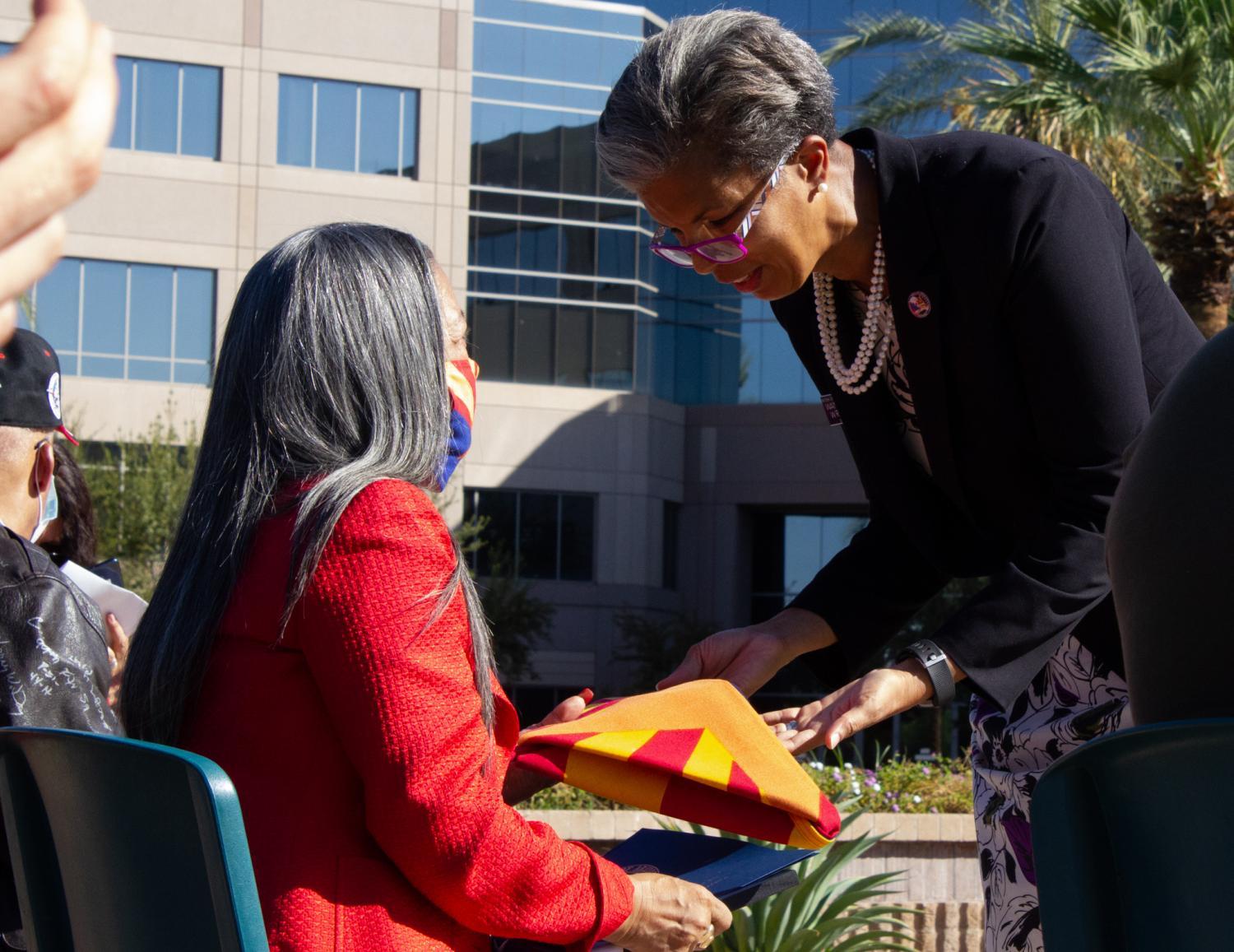 Scott Bourque/KJZZ
Wanda Wright, director of the Arizona Department of Veterans Services, presents a state flag to Rose Biggs-Dickerson at a memorial service for her father, Maj. George Washington Biggs on Oct. 2, 2020. 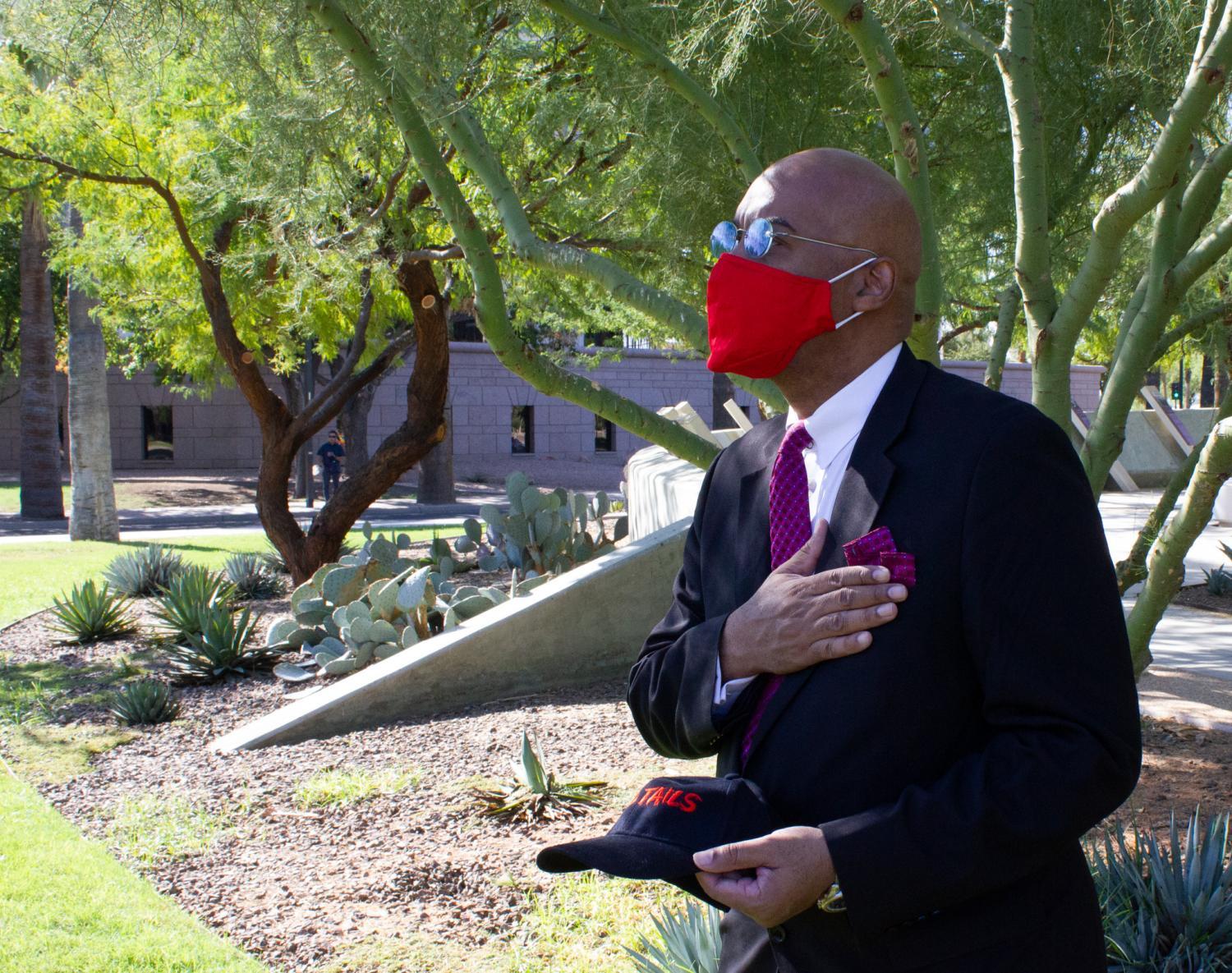 Scott Bourque/KJZZ
Vada O. Manager pays his respects to Maj. George Washington Biggs at a memorial service at the state Capitol on Oct. 2, 2020. 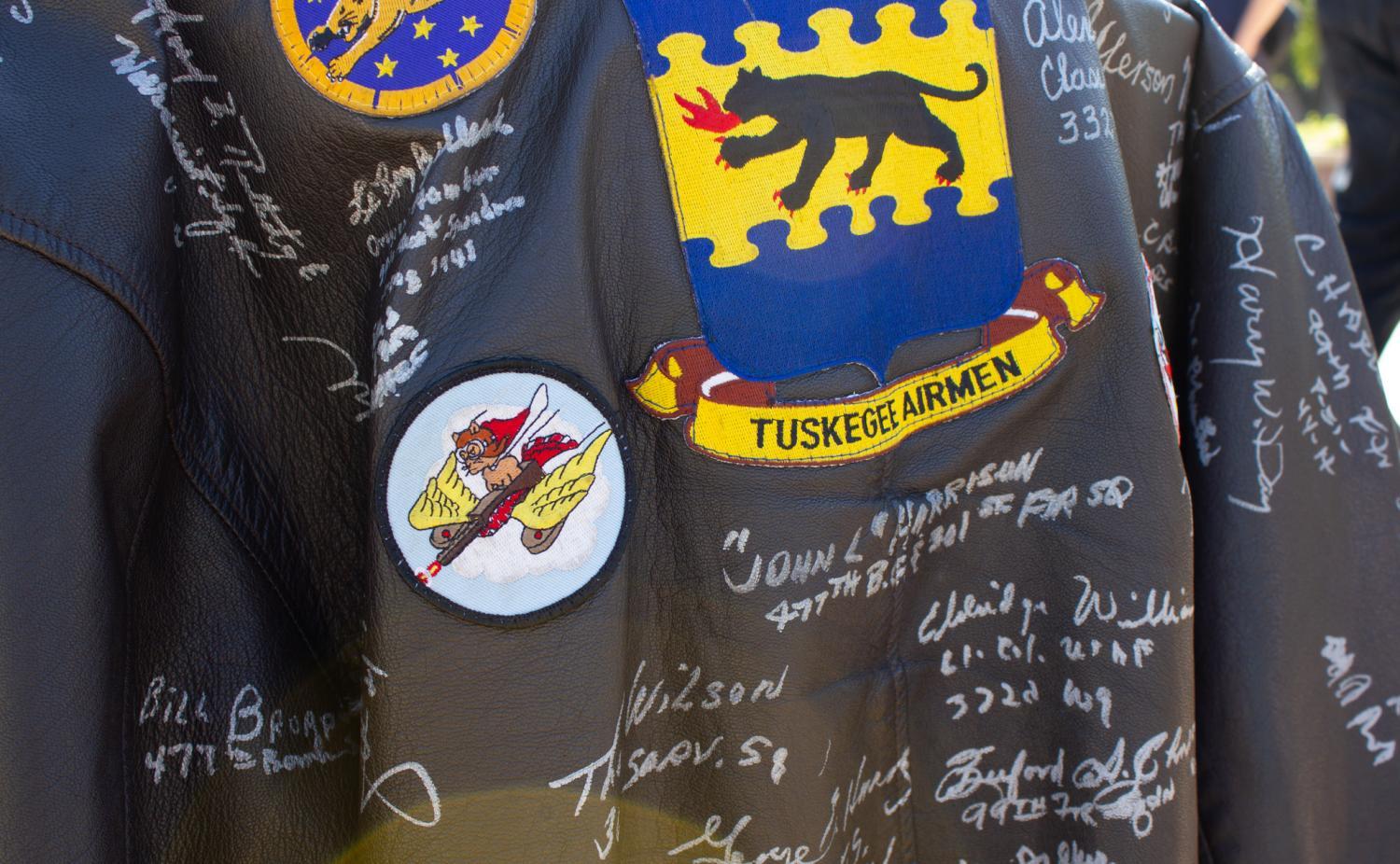