Migrant Caravan Heading To The U.S. Turns Back 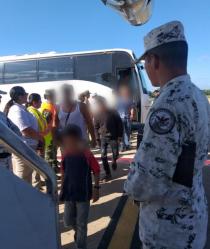 MEXICO CITY — Last week, a migrant caravan from Central America departed from Honduras on its way to the U.S. The Mexican president says American politics had to do with it, but the group is already turning back.

Thousands of migrants arrived in Guatemala over the weekend. But government reports say migrants are walking back or returning in buses, after being convinced that the pandemic represented an obstacle.

Mexican President Andrés Manuel López Obrador said it’s no coincidence that the caravan started a month away from the U.S. presidential elections. He said he doesn’t know who’s behind it, but that it’s clear it came as immigration issues haven’t been addressed by the candidates.

Mexico has flexible migratory policies, but the López Obrador administration tightened the southern border by deploying the National Guard and, recently, by imposing pandemic-related health regulations.

Critics of his government say the president yielded to the Trump administration by turning Mexico into the U.S. border wall.