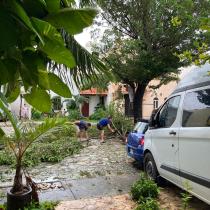 Laura Orrostieta
Neighbors in Cancún, Mexico, help cleaning the streets after being struck by Hurricane Delta.

MEXICO CITY — Hurricane Delta was expected to be the strongest one hitting Mexico’s Yucatán Peninsula in 15 years. The hurricane has been downgraded but is still expected to hit the U.S. coast.

The hurricane struck the Mexican Caribbean coast early Wednesday morning. By the time it touched land, it had been downgraded in strength from Category 4 to Category 2.

But heavy storms and winds of 110 miles per hour still damaged properties and infrastructure in the peninsula. So far, there are no reports of people being killed or injured.

Tourism-driven cities like Cancún, Playa del Carmen and Tulum, which were already suffering economic problems as a result of the pandemic, are among the places affected. But small impoverished towns and Mayan villages might be the ones suffering the most.

Hurricane Delta is expected to continue its way toward the Louisiana coast. And as it crosses the Gulf of Mexico, the hurricane might gain strength again.