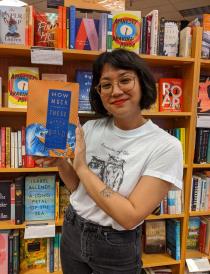 Changing Hands Bookstore
"How Much of These Hills Is Gold" is C. Pam Zhang's debut novel set during the gold rush.

Today, we’ll hear about the debut novel from Chinese-American writer C. Pam Zhang called "How Much of These Hills Is Gold." It’s set during the gold rush and tells the story of siblings Lucy and Sam, who are recently orphaned when their father dies.

"So they end up on the run, with their father’s dead body, literally on their backs, looking for a proper burial ground for him," Michelle Malonzo said. "It’s an adventure story, a Western, an epic and a love letter to immigrants who crossed vast bodies of land and water to come to this country."

Malonzo is a book buyer at Changing Hands Bookstore. She says when Zhang moved to the U.S. from Beijing, she moved around a lot and has talked about being enthralled with stories of the American West. But she noticed she never saw herself reflected in those stories. So she set out to change that with her book, which Malonzo describes as “fierce” and “proud.”

The Show spoke with Malonzo for more about "How Much of These Hills Is Gold."