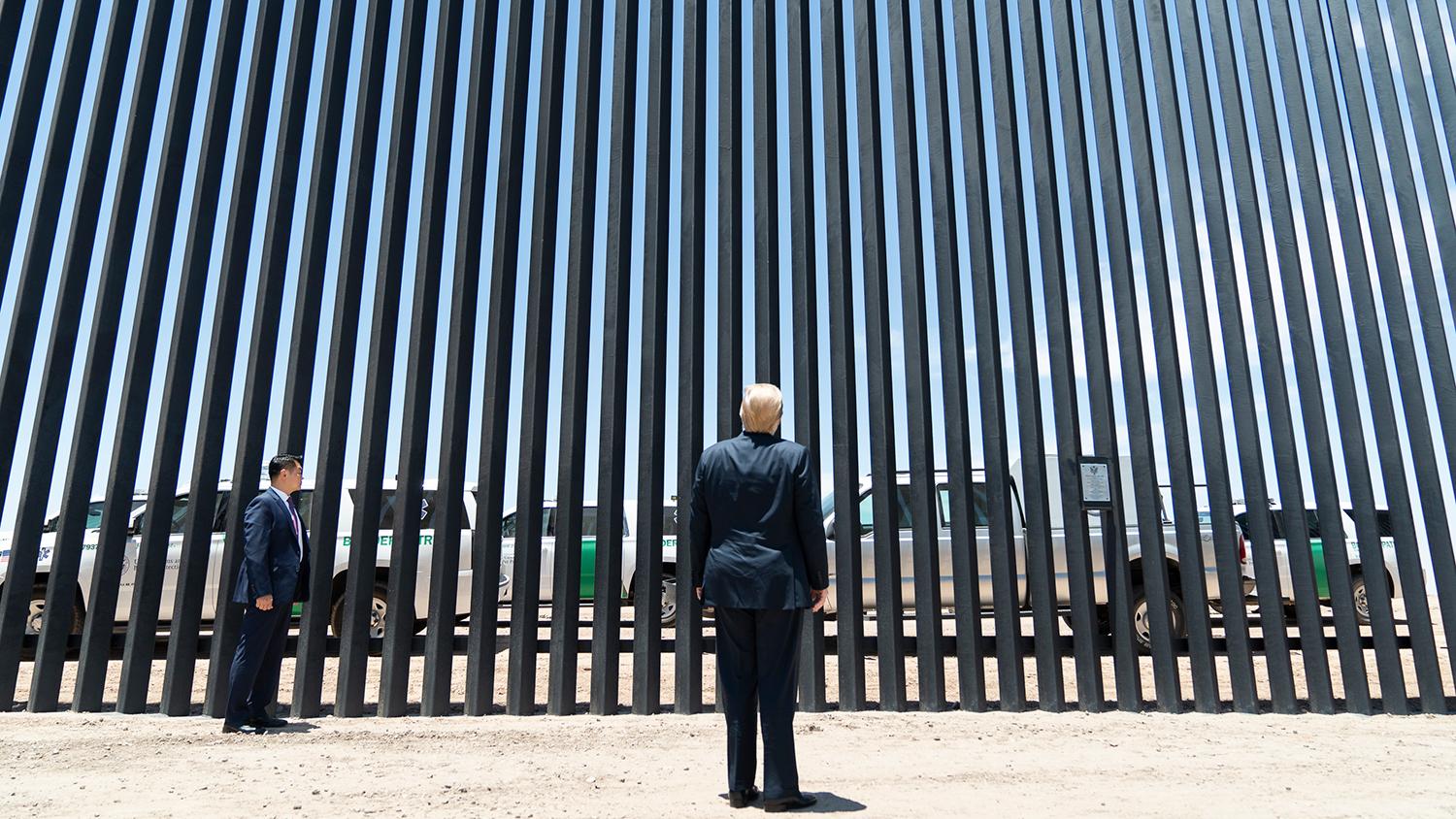 The Supreme Court has decided to take up a two-year legal battle between rights groups and the Trump administration over the funding for segments of the border wall.

President Donald Trump vowed to complete 450 miles of new border wall. Customs and Border Protection has diligently tracked the progress and says now 371 miles have gone up since Monday.

Recently the 9th U.S. Circuit court of appeals ruled the administration was illegally using military funds to pay for 11 segments of the wall. But construction has continued and the court won’t hear the case until next year. At that point, the border wall will likely be complete.

Dror Ladin heads the ACLU’s lawsuit against the Trump administration over the matter and says the fight won’t end there.

"If the court agrees with us, they can always order the wall be taken down," he said. The ACLU had previously asked for an injunction to halt the border wall construction while the case was heard but lost.

The presidential election is 15 days away. If Joe Biden wins, he has said he’ll stop construction. But he hasn’t said whether he’ll withdraw the government’s petition to the Supreme Court.

The court will also hear a suit against the administration's so-called Remain in Mexico program. Under the program, asylum seekers are returned to Mexico to await their hearing before a U.S. immigration judge. But the program was stalled last spring when the coronavirus hit and asylum seekers have now been waiting for months just to get a hearing.

STEVE GOLDSTEIN: The U.S. Supreme Court has agreed to hear the case of whether the Trump administration should be able to use money intended for the military to finish building the border wall. And joining me now from KJZZ's Fronteras Desk in Tucson is Michel Marizco, who's been reporting on the administration's border wall progress. Michel, good morning.

GOLDSTEIN: So the administration promised you would complete 450 miles of border wall. What does the progress look like right now in southern Arizona?

MARIZCO: So right now we're in about 235 miles of border wall. Most of that is replacing border wall that had gone up under presidents Clinton, Obama and Bush in previous years. And that includes areas is along the San Pedro River along Oregon Pipe Cactus National Monument. So in a lot of fairly precious areas, that wall is going up.

GOLDSTEIN: So we know there have been protests and some of those have been political. Some have been environmental. But is there pushback from those communities along the border against the ongoing construction?

MARIZCO: Yeah. So, you know, Congresswoman Ann Kirkpatrick has said that she's reached out to Homeland Security with questions and concerns about the project — no answer. The Cochise County Board of Supervisors, again, they've had no communication from Customs and Border Protection on on the programs. And over on the on the western area of Pima County, on the Tohono O'odham Indian nation, the chairman there, Ned Norris, has said that CBP claims that everyone is cooperating, but they say that there's just been no communication. So right now, the federal government has been shutting out local governments from any sort of input on the border wall.

GOLDSTEIN: So Michel, where does this go and the whole big picture? I've been involved, you know, a bunch of these debates among members of Congress over the last couple of weeks. And one of the things that comes from those who support the president is the border wall, the border wall. And then an opponent might say, well, what about technology? And they'll say,"Well, that needs to be part of it as well." How much is the border wall sort of a centerpiece rhetorically? How much does it really fit in the overall aspect of border security?

MARIZCO: It's a really good question. I'll go back briefly in history to President Bush. At that time, they were replacing the old Vietnam War landing mat platforms with what they were deeming "smart borders" — a mix of people and technology and infrastructure. By the time President Obama came in, drive-throughs were a real big issue with smuggling — just straight up driving through the border. And vehicle barriers made a lot of sense. The administrations at that time had said that there wasn't a need for a massive wall. Now, the current administration has said that this wall serves to intimidate people. There's been so many other factors like the pandemic and the economy that have gone into illegal migration patterns, that that's really impossible to know whether or not the wall is actually having that deterrent effect. So right now, it will be very interesting to see if that sort of narrative from the federal government, from law enforcement, the Border Patrol, changes in the coming months, and they say that they no longer need a border wall, that they need more technology. That narrative tends to change as administrations change.

GOLDSTEIN: Well, that's a great segue then, because we're two weeks away from official Election Day, though millions of ballots have already been cast. If Joe Biden wins the presidency, what does the border wall look like from there?

MARIZCO: Right. Well, you know, I was just speaking with folks from the ACLU and the Southern Borders Communities Coalition a few days ago on this very topic. And I asked them, would you sue the administration if a Biden administration became the defendant in Sierra Club v. Trump? And the answer was yes, that they would sue to have the border wall taken down. Right now with this current case, it's very possible that a Biden administration would withdraw its petition to the Supreme Court. But if they didn't, and if they chose to, for whatever reason, keep the project going? Well, then, you know, then there's going to be lawsuits in the other direction now not to prevent the wall from going up, but to make the government take it down.

GOLDSTEIN: That is Michel Marizco from KJZZ's Fronteras desk in Tucson. Michel, thanks as always.