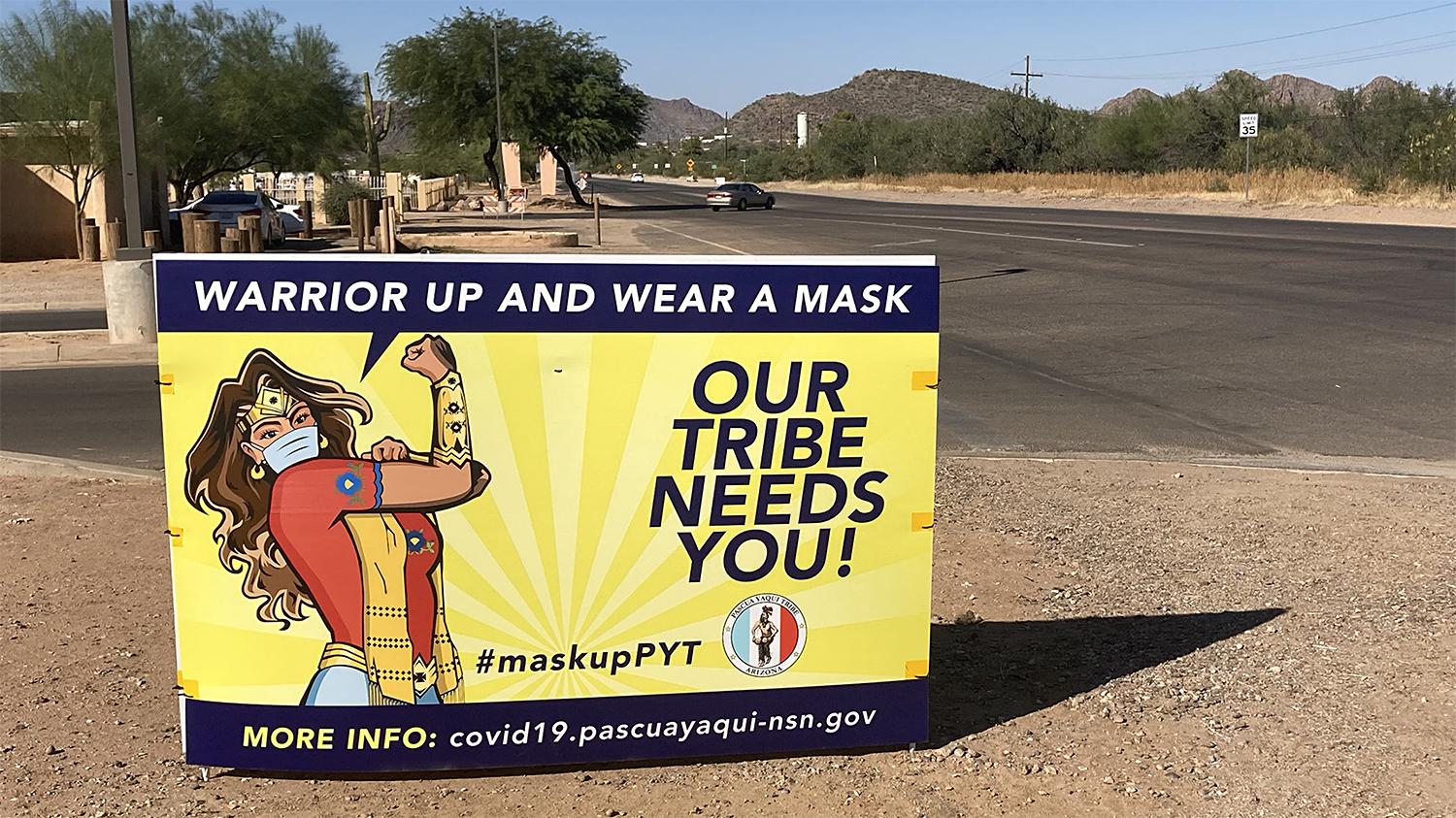 Emma Gibson/AZPM
Sign in the Pascua Yaqui Tribe's lands urging tribal members to wear a mask during the COVID-19 pandemic.

LAUREN GILGER: A federal judge ruled against the Pascua Yaqui tribe's efforts to reinstate an early voting location on their reservation before the election. The tribe sued Pima County Recorder F. Ann Rodriguez earlier this month, arguing that the closure of the early voting site there made it harder for tribal members to vote. But the presiding judge denied their request late last week. Judge James A. Soto said the tribe had failed to prove that not having an early voting site would make someone unable to vote and could detrimentally impact the 2020 election in Pima County. Here to tell us more is Arizona Public Media's Emma Gibson from Tucson. Good morning, Emma.

GILGER: OK, so let's start with some background here. Why did the Pascua Yaqui tribe file this lawsuit to begin with?

GIBSON: Well, after months of advocating for early voting in the reservation, they decided to sue the Pima County recorder for not instating such a site for this week. They said during the hearing that her actions were kind of a part of a legacy of discriminatory voting barriers against indigenous people, whether that be, you know, literacy tests and voter intimidation. During the hearing, they pointed to the Voting Rights Act of 1965, which at one point says something along the lines of you can't deny a U.S. citizen the right to vote based on their race or color. And the tribe argued that by not reestablishing an early voting site in the reservation, the recorder decreased the opportunities for this group of Native Americans to vote safely, especially during the pademic. You know, the tribe also pointed to the lower car ownership rates that you'll see in the reservation. And for many who don't have a car, they're dependent on public transportation. And that can mean a two-hour [round] trip to the next-closest early voting site.

GILGER: Wow. OK. So the tribe had an early voting site in previous elections, right? So why was it removed?

GIBSON: Yes, it was established back in 2010 by F. Ann Rodriguez. And then in 2018, about a month before that August 2018 primary election, she closed it down. When I first started reporting on this topic, I talked to tribal council member Herminia Frias. And this is how she, she described how she felt at that time.

HERMINIA FRIAS: What is the message that that sends to us? Doesn't our vote matter? We're a sovereign nation.

GIBSON: You know, Pima County Recorder F. Ann Rodriguez, she said that the reasons that she closed down that site were due to low voter turnout and a lack of security. And by lack of security, she kind of pointed towards physical security and IT security. She also was trying to move away from, from early voting sites that only served voters from select precincts. You know, the next closest early voting site to the Pascua Yaqui Reservation is the Mission Public Library, and it is a full-service site — meaning that it can serve voters from any precinct. But even without early voting this year, there will be a polling place in the Pascua Yaqui reservation on Election Day.

GILGER: On Election Day. Right. And as we heard earlier, the federal judge here, James A. Soto, denied the motion. Tell us more about his ruling and his rationale here.

GIBSON: So Soto listed a variety of things. One was the time crunch. The Pascua Yaqui filed this lawsuit on Indigenous Peoples' Day, so just a couple weeks ago. And that turnaround to go from filing a lawsuit to getting the ruling also pushed up the scale of what the Pima County recorder would need to do to prepare to establishing this early voting site. And he said it would just be a substantial hardship to administer the election in that timeframe. He also said that there was no evidence that not having the site would make someone unable to vote, as you said in the intro. He also said that the tribe didn't prove that without early voting this year, the community would suffer an unrepairable harm.

GILGER: What has the tribe's reaction been to this?

JONATHAN DIAZ: Members of the Pascua Yaqui tribe and the tribal council who testified, I think, really highlighted the burdens and the obstacles the tribal members face in accessing early voting without a site on or closer to the reservation.

GILGER: OK, so we know it'll be too late for this election. Is there any sense, Emma, that another lawsuit might be filed so the tribe can get early voting on their reservation in the next election?

GIBSON: Well, after the ruling came down, I talked to council member Herminia Frias and she said that they are going to try to get an early voting site established in the reservation for the next election. She wasn't specific about what form that would take, but F. Ann Rodriguez is retiring this year. So we're actually having an election right now. And the Democratic candidate, Gabriela Cázares-Kelly, she's already committed to reinstating that site.

GILGER: So historically, though, we know that voting access on tribal nations in reservations has been difficult. Like, this has been an issue for many tribes for a long time. Tell us about some of those barriers, and have any of them been addressed?

GIBSON: Yes. And, you know, some have definitely been addressed. A common one is a lack of street addresses. When you don't have a street address, that can lead to complications in registering to vote. And also, you can't get a ballot delivered to your door. But one of the victories that we saw this year was in September, the Arizona secretary of state allowed people to register to vote online without a standard address so they could use things like plus codes, which are short alphanumeric codes, or they could use longitude and latitude or they could even describe — have a short description of where their home is located. But that leads us back to other issues, like there's a lack of internet on tribal lands. So there are definitely some issues there. And when you talk about voting by mail for these people who don't have street addresses, that means you're getting your ballot sent to your P.O. box. But having a P.O. box means, you know, you need a post office for that. There are about 20 million acres of tribal lands in Arizona and there are 48 post offices. So you can kind of see, that just inherently means you have to travel to get to the post office. So there's a lot of time that goes into voting for voters in tribal lands.

GILGER: All right. That is Arizona Public Media's Emma Gibson joining us from Tucson this morning. Thank you so much, Emma, for your reporting on this.

EDITOR'S NOTE: This story has been updated to clarify the time it takes to get to an early voting site.