Mexico’s Día De Muertos Globalizes, But The Pandemic Threatens It 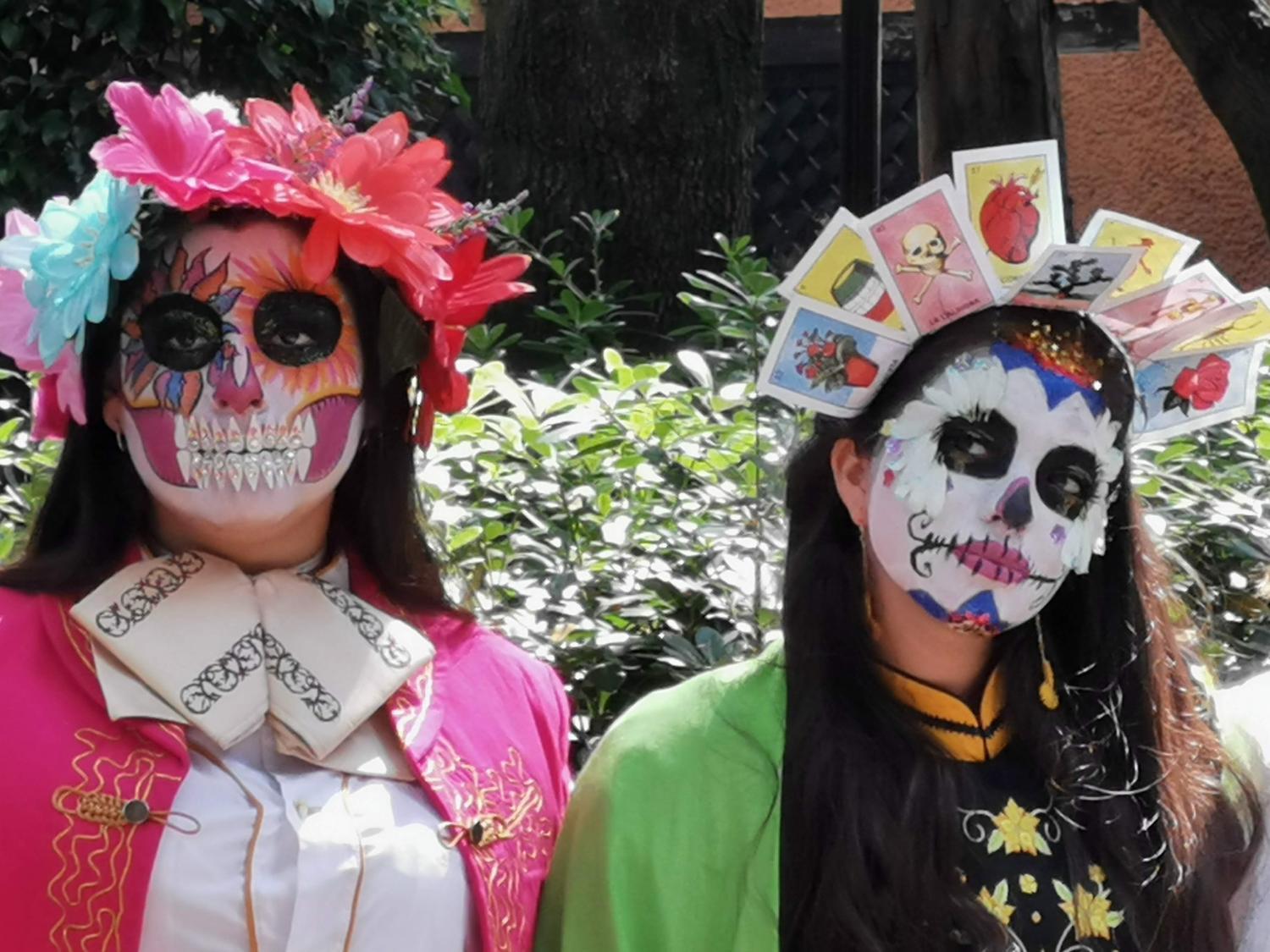 MEXICO CITY — Every Nov. 1 and 2, Mexico celebrates the Day of the Dead holiday to remember beloved friends and family members who have died, and celebrate life. The United Nations proclaimed it an Intangible Cultural Heritage of Humanity almost two decades ago. But this year, as the celebrations expand around the world, the pandemic is bringing new challenges. 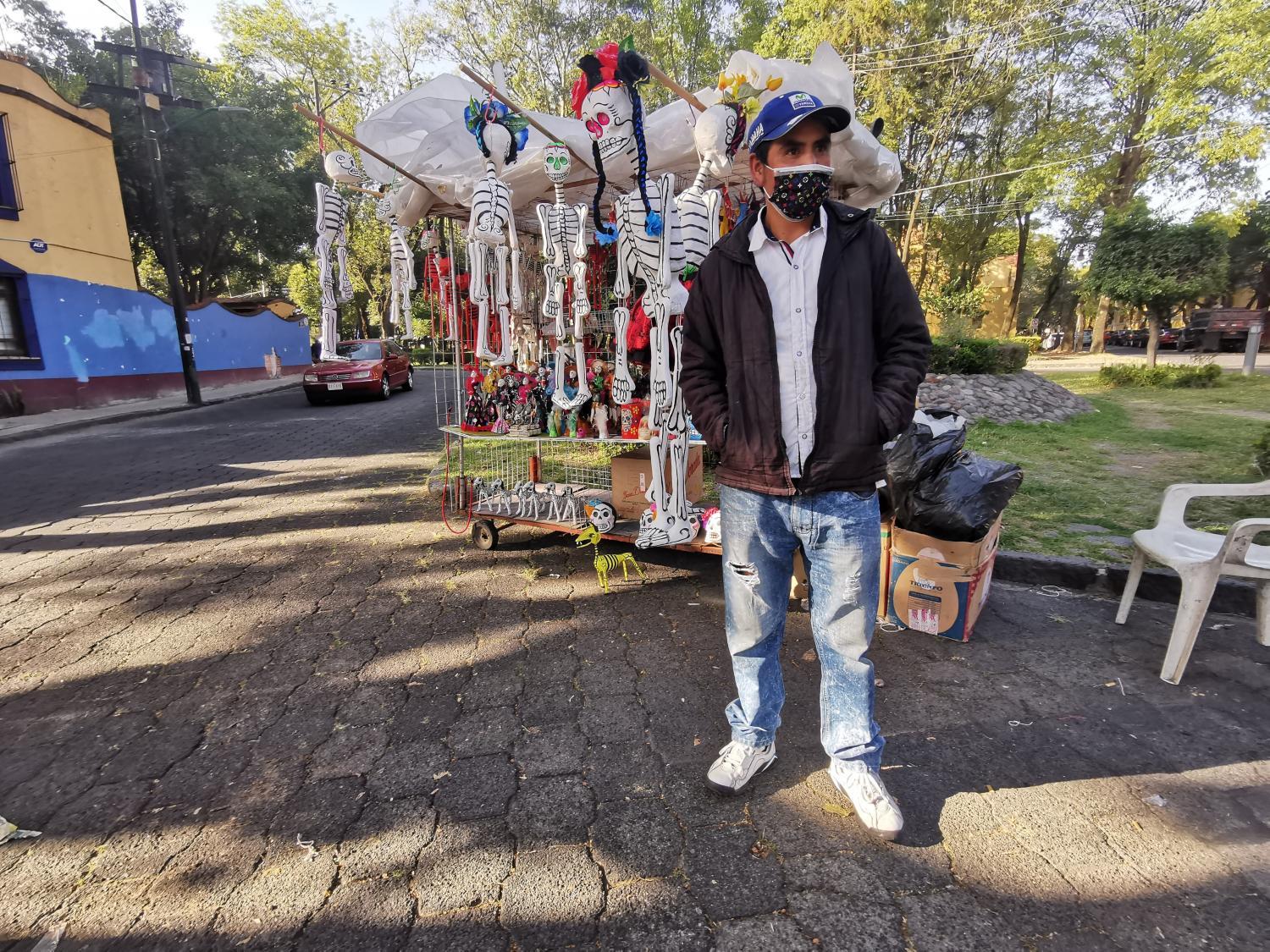 Rodrigo Cervantes/KJZZ
Moisés Gónzalez has been making and selling carton figures for the Día de Muertos celebrations in Mexico City for 20 years.

For 20 years, artisan Moisés Gónzalez has been making carton figures for the Día de Muertos celebrations in Mexico City.

Most of them are skulls and skeletons, but also “Judas,” a traditional figure used to cast evil away.

“Unlike skeletons, which are the good ones, the Judas are the bad ones, meant to be burnt,” González explained.

The majority of the Judas depict demons, but some represent politicians. Among them is President Trump. But González says his popularity dramatically dropped this year.

“I run out of the Judas figure of the Mexican president every time I bring it with me!,” he says, chuckling. And he said he thinks it is, in part, a result of  the president’s indifference during the pandemic.

González says customers from all over the world came to buy his work. But the COVID-19 restrictions have left him with a very few, local buyers.

Mexico City’s mayor, Claudia Sheinbaum, announced just a few days before testing positive for COVID-19 that, despite the cultural importance of the Day of the Dead, graveyards will remain closed and public altars will not be allowed.

And for some, the government contradicts itself as it allows malls, some museums and themed parks to partially reopen. 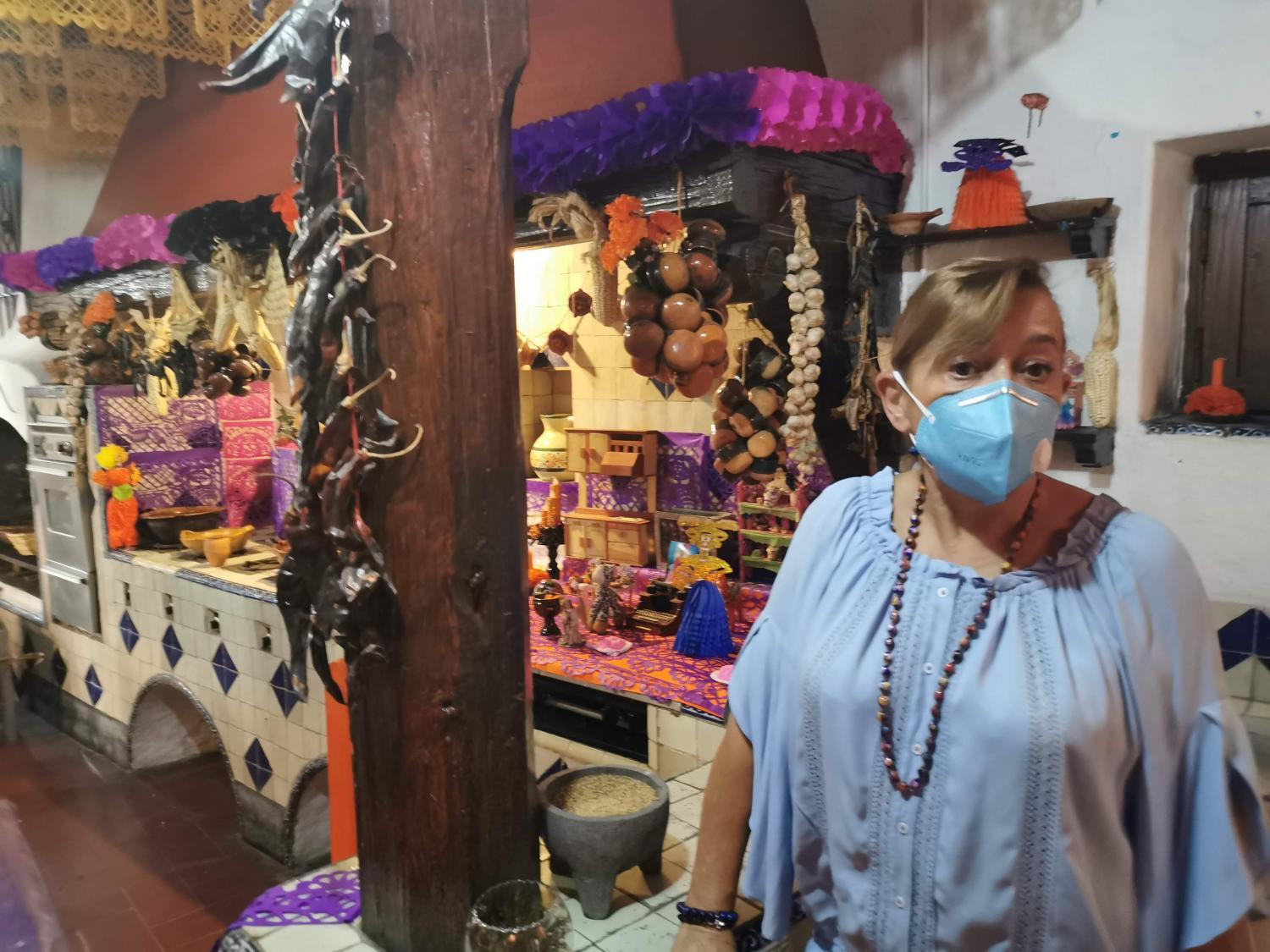 Altars For the Dead — Waiting For the Living

Ana María Valdez leads on a tour of the former mansion of Emilio “El Indio” Fernández, a famous Mexican actor and director who also worked in Hollywood.  And Valdez repeats a well-known urban legend: “The Oscar award was modeled after ‘El Indio’.”

Valdez manages the site, which has included one of the most visited altar exhibits in Mexico City for more than three decades.

“The house gets packed with altars during the holidays,” she said.

Last year, they built almost 50 altars, with most dedicated to Mexican celebrities. And she said 15,000 people came here to visit.

This year, they built fewer altars, leaving more room for people to walk during the pandemic. But the government is not allowing them to open, and she says many people's income is at risk.

“Sadly, that’s the way the Mexican government is — unjust and filled with contradictions,” Valdez said.

In other parts of the country, ancient traditions are also at risk after the pandemic. Such is the case of Huautla, in the state of Oaxaca, a town well known among tourists for its shamanism and its Day of the Dead traditions. 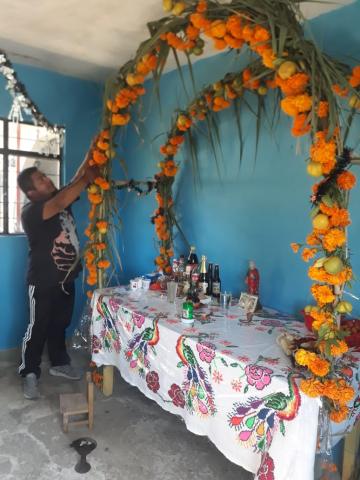 Huautla’s mayor announced in Mazatec, the regional tongue, that cemeteries would remain closed. And its famous huehuetones, the carnival from which the background music comes from, will have to be restricted.

“Despite the pandemic rules, everyone’s excited with the celebration,” said Jonathan García, an inhabitant of Huautla.

García said there’s an understanding that it’s not a time to question the authorities, but to gather up with the family, either alive or dead.

“Inside our homes, families will still place our altars to wait for the comeback of those who departed earlier,” said García.

They build an arch with cempasúchiles, the orange marigold flower used for the Day of the Dead, and put a table underneath with food and candles for the visitors for the dead.

“This tradition is what our ancestors left us,” he said. And he added he feels happy and proud many around the world appreciate his culture more and more.

A Global Celebration; A Time To Reflect

Marijke Van Rosmalen is a historian specializing in the Día de Muertos festivities. She said the celebration is not a Mexican curiosity anymore. And Hollywood and migrations contributed to make it universal. 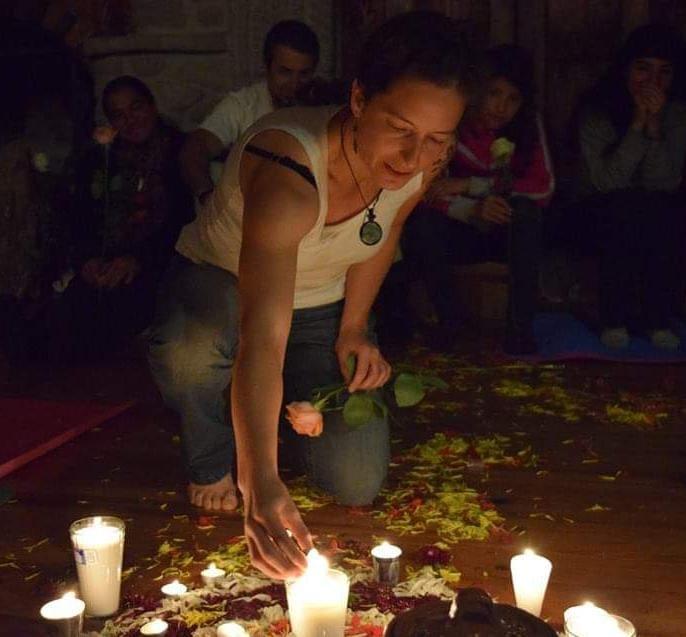 “I don’t find it wrong or bad or disrespectful to try out something that is from another culture,” the researcher and writer said.

She explained that the 20th Century nationalism made the festivity a Mexican cultural identity celebration and an indigenous pride symbol. But she said the Día de Muertos has a complex history — even partially shared with Halloween.

Van Rosmalen explains the pre-Columbian mortuary celebrations mixed with the Catholic tradition of the All Saints Day, and even with the Celtic Samhain festivity for autumn abundance.

Van Rosmalen says it’s no coincidence that in Mexico both grief and joy are part of the festivities. And this year, the privacy of the celebrations brought by the pandemic might bring new meanings.

“It’s just a time to reflect right now. A reflection, a deep reflection of who we are and how we face death,” she said.

How To Make Your Own Dia De Los Muertos Altar 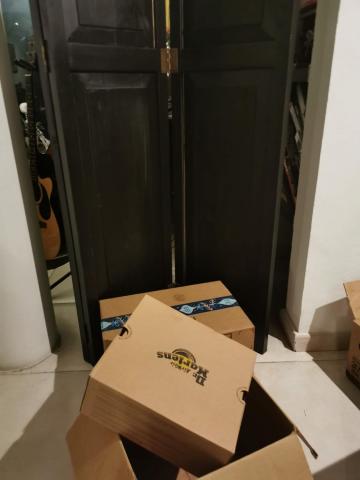 Rodrigo Cervantes/KJZZ
How to put together a Día de Muertos altar. Step 1: Use boxes, tables or furniture to place the altar. Size doesn't matter. 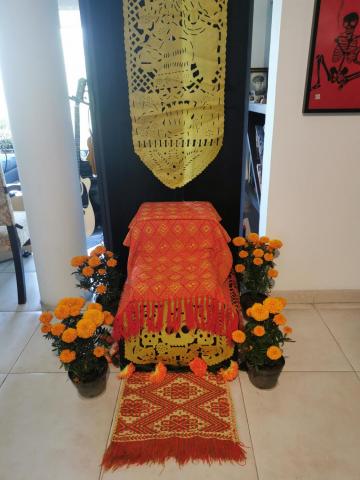 Rodrigo Cervantes/KJZZ
Step 2: Use "papel picado" (decorative paper) and cempasúchil (Day of the Dead flowers, orange marigolds or similar flowers) for the base of the altar. Orange, yellow, purple and black are the most traditional colors. 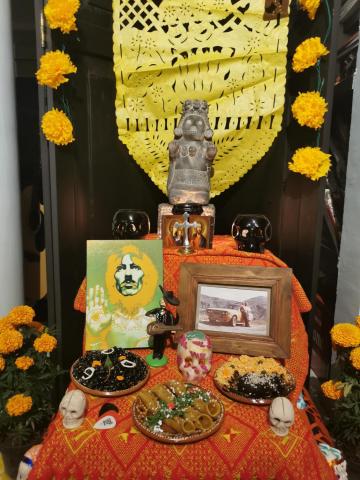 Rodrigo Cervantes/KJZZ
Step 3: A typical way of placing it has two layers. God, the saints or, in this case, a Mexica Goddess of the Dead go on top. The second layer has the pictures of the "guests". One of them here is ex Beatle George Harrison! 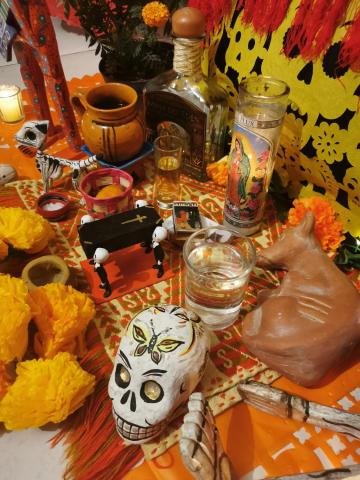 Rodrigo Cervantes/KJZZ
Step 4: Add food, drinks and things "guests" appreciated in life. Water is essential for easing their thirst. Salt preserves them. Xoloitzcuintles dogs were guides to the underworld. Candles light their path. 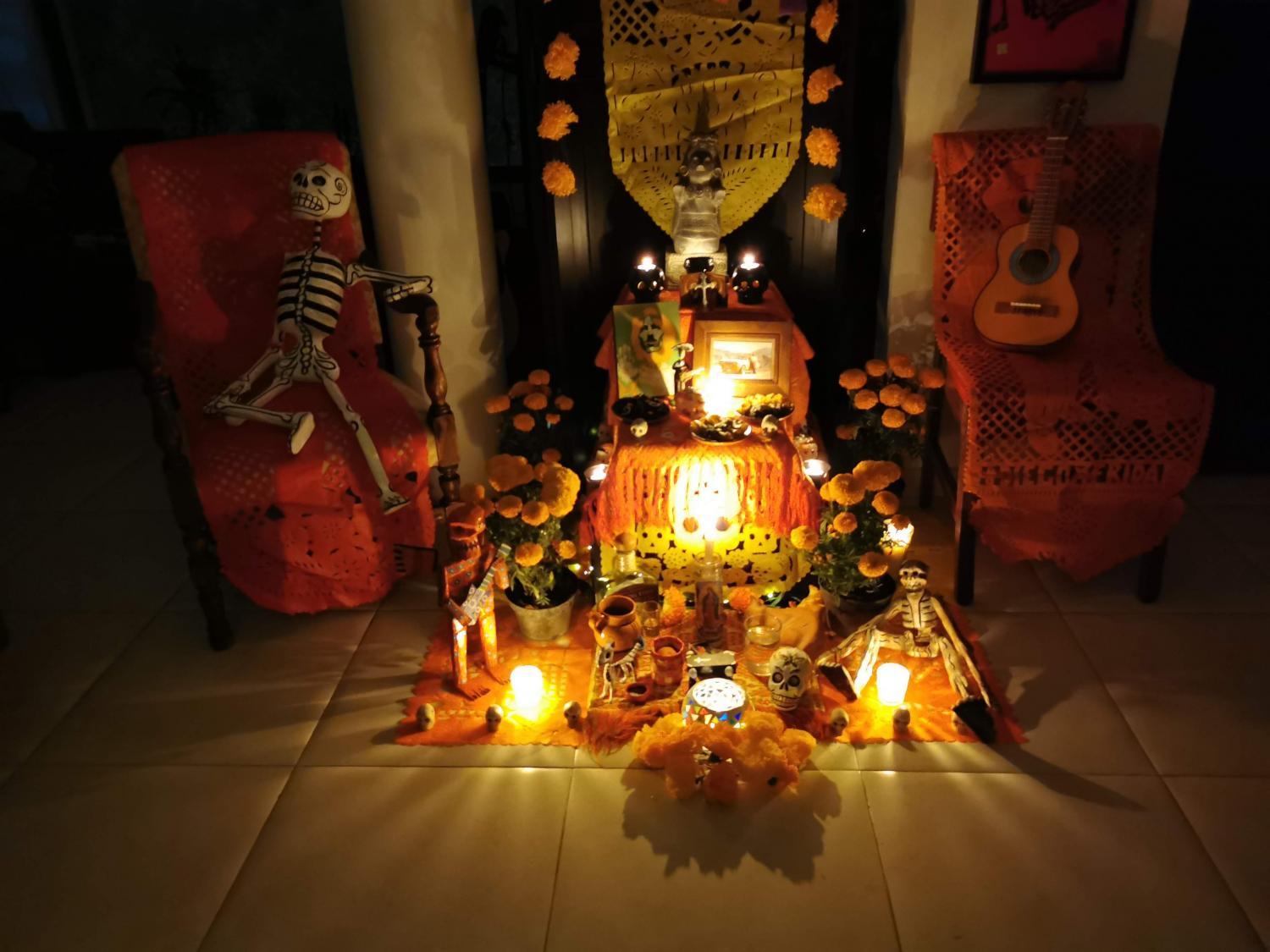 Rodrigo Cervantes/KJZZ
Step 5: Light the candles on the eve of Día de Muertos. Pray, if you want, or symbolically share dinner with your beloved ones, alive or dead. This is a celebration of life and the legacy of those who left us. 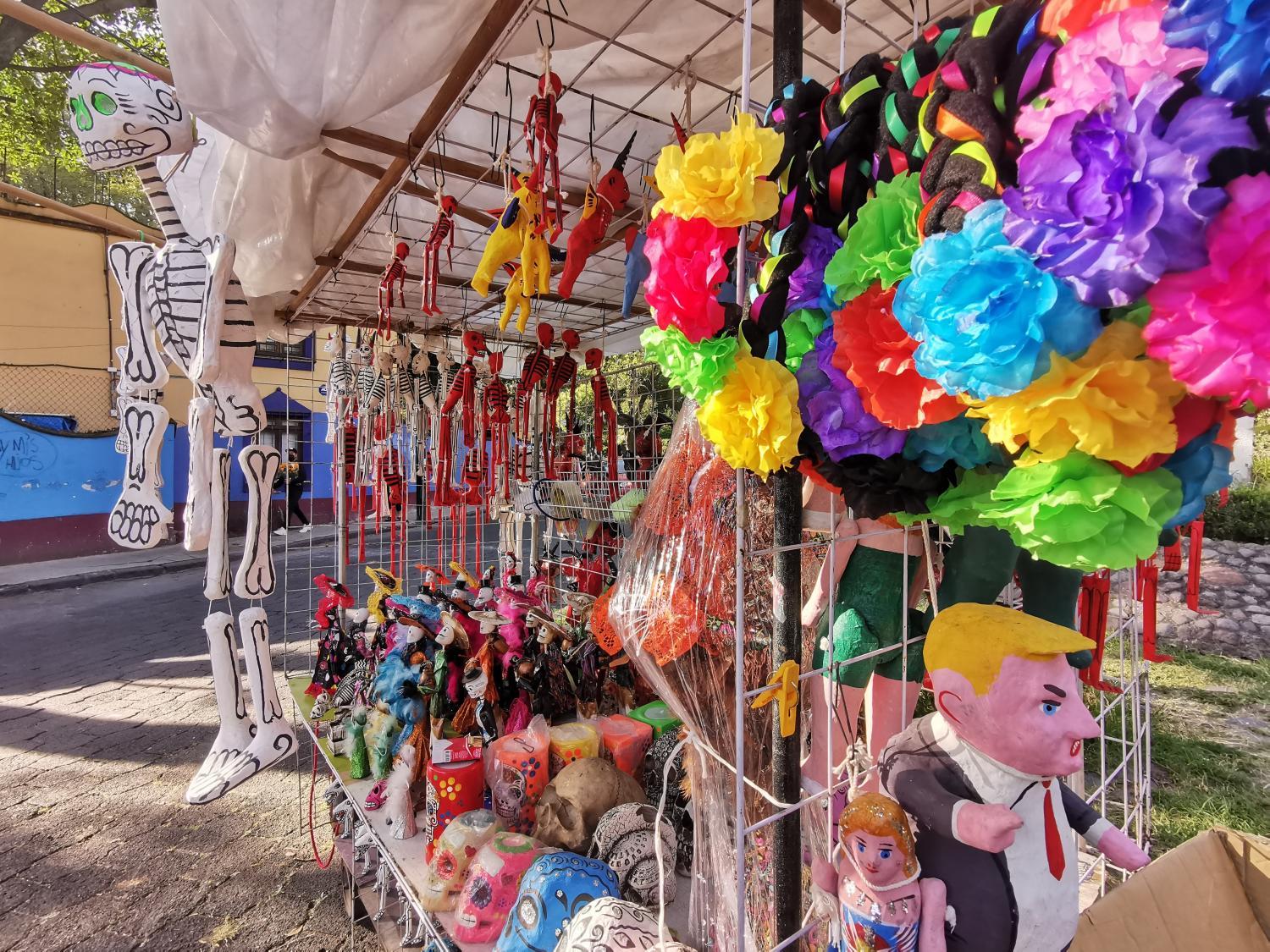 Rodrigo Cervantes/KJZZ
"Calaveras" (skeletons), "Catrinas" (female elegant skeletons) and "Judas" (representations of the devil or bad politicians) being sold in Mexico City before the Day of the Dead festivities. 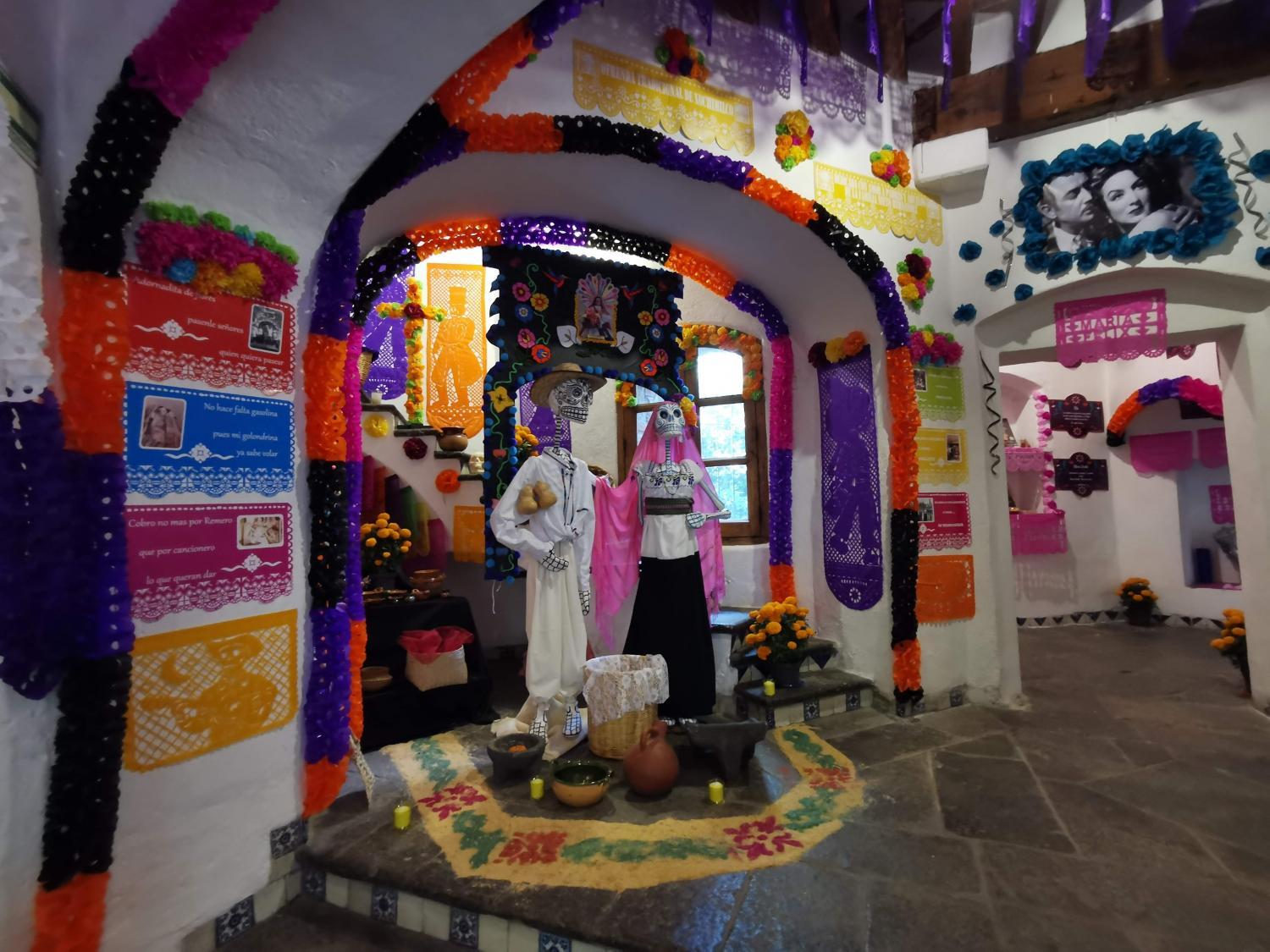 Rodrigo Cervantes/KJZZ
One of the Day of the Dead "ofrendas" at the "Indio" Fernández mansion on the most visited altar exhibits in Mexico City. 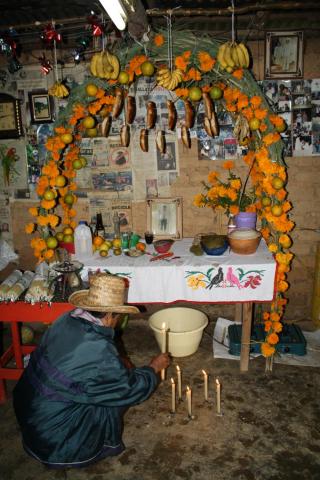