Nearly every day, John Kurc drives into a remote area of the Peloncillo Mountains in the Sky Islands region of Arizona and Sonora to shoot photographs and drone videos of huge dynamite blasts in Guadalupe Canyon.

“You see this huge blast and all this dirt and boulders cascading down the mountainside,” he said. “Then bam, two seconds later you hear the blast.”

Out here, about 30 miles east of Douglas, and just a few miles from the New Mexico state line, he watches from afar as crews contracted by the U.S. Army Corps of Engineers detonate explosions across cliff faces, clearing the way for new sections of 30-foot high steel bollard wall. 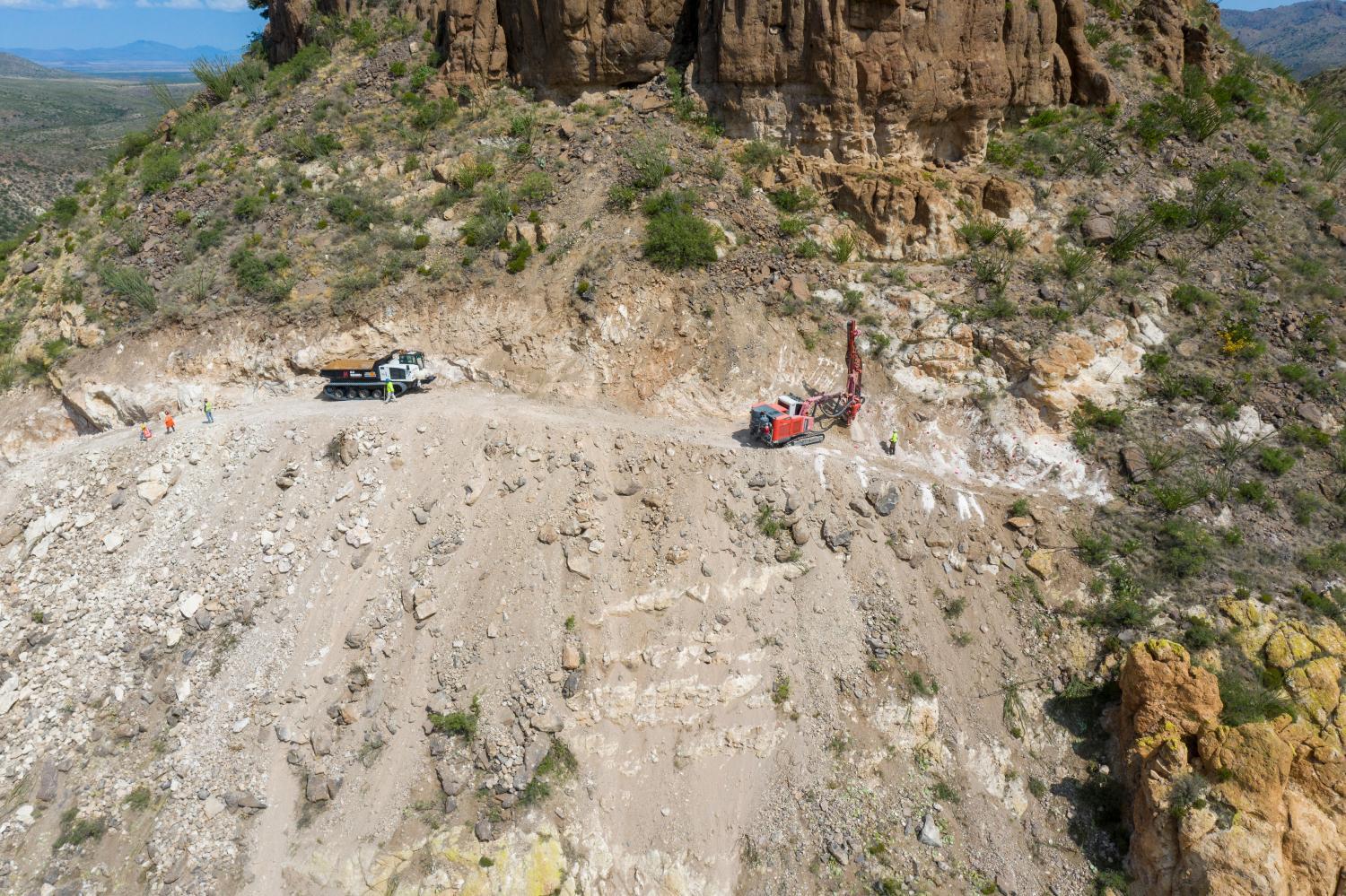 John Kurc
Bulldozers push through rubble as they clear a wide swath through Guadalupe Canyon to build the border wall.

While much of the wall constructed under the Trump administration has replaced existing border barriers, these rugged, isolated mountains were previously untouched.

“No, no, there was absolutely nothing here. These sections were even too steep to put in the Normandy barriers,” Kurc said, describing the low vehicle barriers that used to be common in remote parts of the Arizona border. “But out here, they didn’t have any of that. That’s why it’s so shocking.”

“It’s creating havoc on Mexican land, and it really needs to be stopped,” he said. “I really think Mexico needs to be involved and they need to have an observer out there to see what’s going on every day when this dynamite is blasting.”

On Oct. 24, the Mexican arm of the International Water and Boundary Commission (CILAMEX) released a statement saying it has asked its U.S. counterpart for information about the use of explosives at construction sites along the border in Arizona. The statement said inspectors have yet to find damage on Mexico territory, but that they would continue monitoring to ensure the cross-border debris is not affecting Mexican land.

Nearly 400 miles of new wall have been built since President Donald Trump took office. In Arizona, much of that construction has taken place on federally protected lands. And while some celebrate what they consider a deterrent to undocumented immigration and drug trafficking, others have been dismayed by the wall’s high cost and environmental destruction.

Demonstrators in Arizona have repeatedly protested against damage to sites sacred to Indigenous nations whose territory spans the U.S.-Mexico border, and to rivers, aquifers and vital wildlife corridors - harms that also affect communities south of the border in Sonora.

“You divide. You divide societies, you divide people,” said Jose Ramos Arzate, mayor of Sonoyta, a town of about 17,000 people just across the border from Arizona’s Organ Pipe Cactus National Monument, where border wall construction started more than a year ago.

“This is part of our ecosystem, the flora and fauna,” he said. “We are part of a huge desert that we should respect. And it’s not being respected.

From Sonoyta, Ramos said he can see and hear ongoing construction. He said crews have dumped pieces of the old metal barrier and other construction waste south of the border - a complaint the Army Corps of Engineers has confirmed is being investigated. 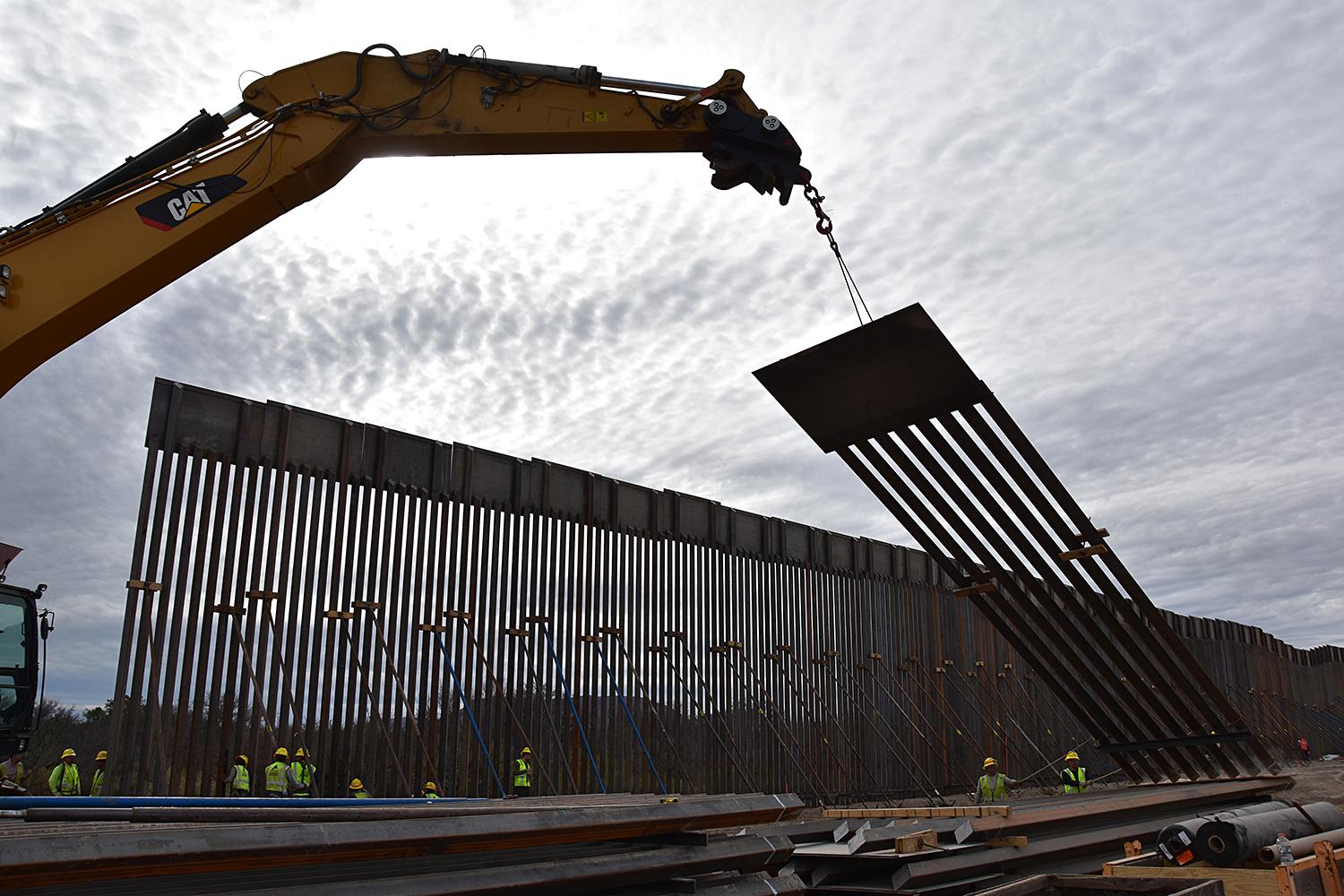 “But I can’t intervene, can I?” he asked, saying that as mayor of a small border municipality, there’s little he can do to halt U.S. border construction.

“I would expect to see a government that is fighting that battle and trying to pressure the U.S. government, especially now, with the elections going on,” he said. “But the Mexican government doesn’t care what’s happening on the border, and they care even less about the environmental impacts.”

The Trump administration has waived dozens of laws to build the border wall, including many meant to protect the environmental and cultural sites. And Quadri said construction has already caused localized damage, ripping up saguaros, crushing plants and stressing animals. But he’s more concerned about the potentially devastating long-term consequences of borders impassable to local species.

Kendal Blust/KJZZ
Miguel Gómez holds up a photo of a jaguar captured on a camera trap on the Northern Jaguar Reserve in Sonora, Mexico on May 17, 2019. Reintroducing jaguars to Arizona will require cross-border connectivity.

“A lot of the populations in Mexico depend on having a genetic flow of individuals moving freely across the border,” he said.

Jaguars, ocelots, mountain lions and black bears rely on these critical migration corridors across the border. As do Mexican wolves and bison, once extinct in Mexico and only recently recovered thanks to dedicated — and costly — binatational efforts. The wall will likely cause them to die off again, Quadri said.

He believes Mexican officials have a responsibility to stop that kind of environmental loss, both by investing in environmental protections in Mexico to counteract the negative impacts of the border wall, and by speaking out internationally against its construction.

“But instead they shut up and say nothing about it,” he said. “It’s embarrassing, honestly.”

Many in Mexico were shocked when President Andres Manuel Lopez Obrador, known as AMLO, praised Trump during a July visit to the White House.

“I’m here to express to the people of the United States that your president has behaved toward us with kindness and respect,” he said during a speech in the Rose Garden.

And AMLO has continued to stay mum on the border wall, telling reporters in September that he wouldn’t comment until U.S. elections were over.

Jesus Velasco, an expert on U.S.-Mexico relations at Tarleton State University in Texas, said AMLO is avoiding conflict with the U.S.

“Now, Mexico has become the wall. Mexico is the wall,” he said. “What you see is that Mexico is doing the dirty work for the United States.”

Mexico has deployed its National Guard and other resources to turn back U.S.-bound migrants, and has allowed tens of thousands of asylum seekers back into Mexico to await U.S. hearings under the Migrant Protection Protocols, also known as the “Remain in Mexico” program. 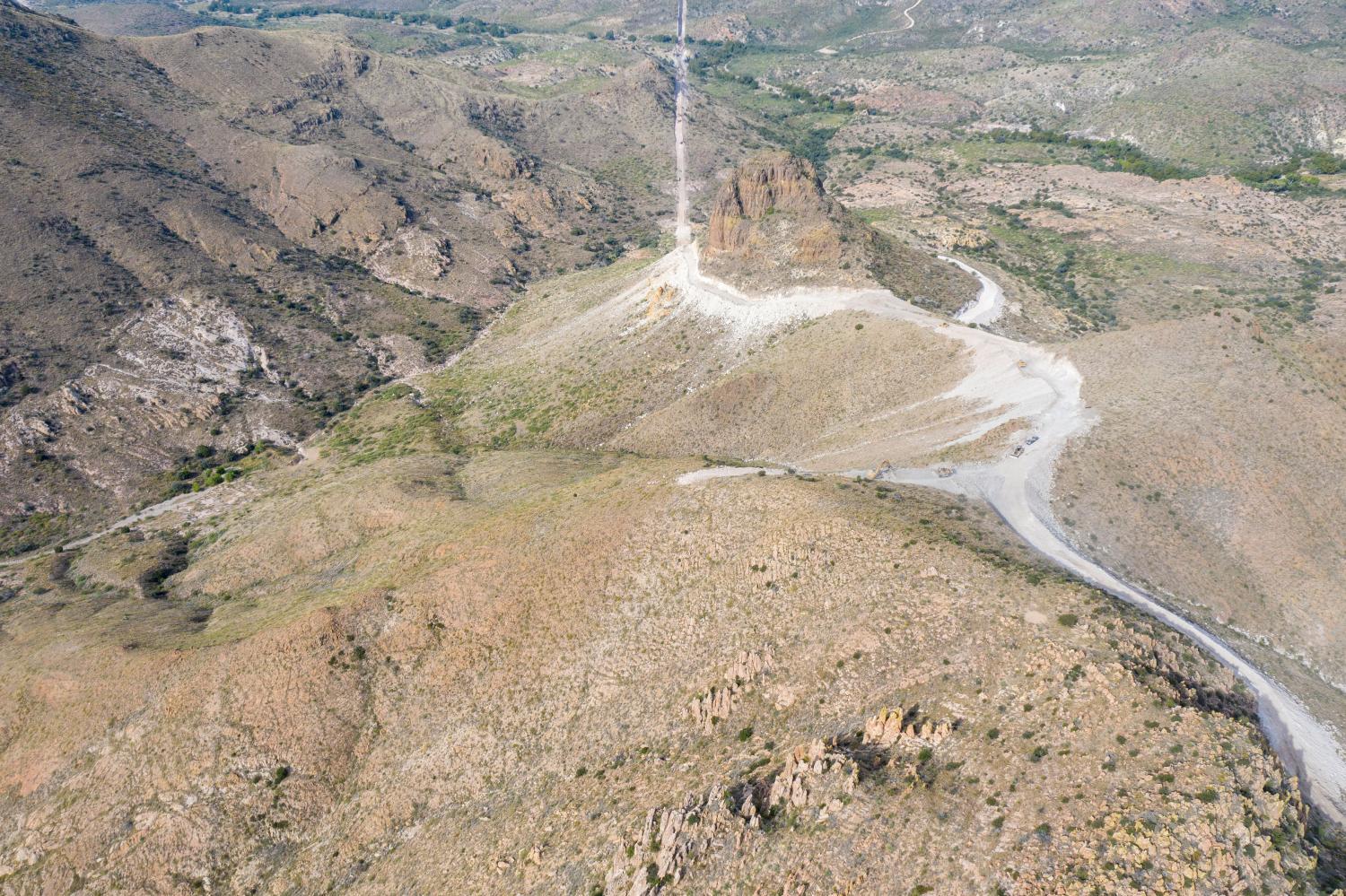 John Kurc
A road winds through Guadalupe Canyon where construction crews are clearing a path for the border wall in this remote area of the Peloncillo Mountains in Arizona.

That acceptance of U.S. immigration enforcement policies is a far cry from the highly critical stance AMLO took in his book “Oye, Trump,” published before he took office in 2018, Velasco said.

But it’s not easy to have such a rich and powerful country as a neighbor, he added, especially after Trump threatened tariffs on Mexico if it didn’t crack down on immigration.

The consequences of unhindered border wall construction have already scarred Mexico’s borderlands, said Sonoran biologist Mario Cirett. But he hopes if policies change, some of that damage can be reversed in time.

For that to happen, though, border wall construction would have to stop, he said, and at least some of the walls that have gone up would have to come back down. 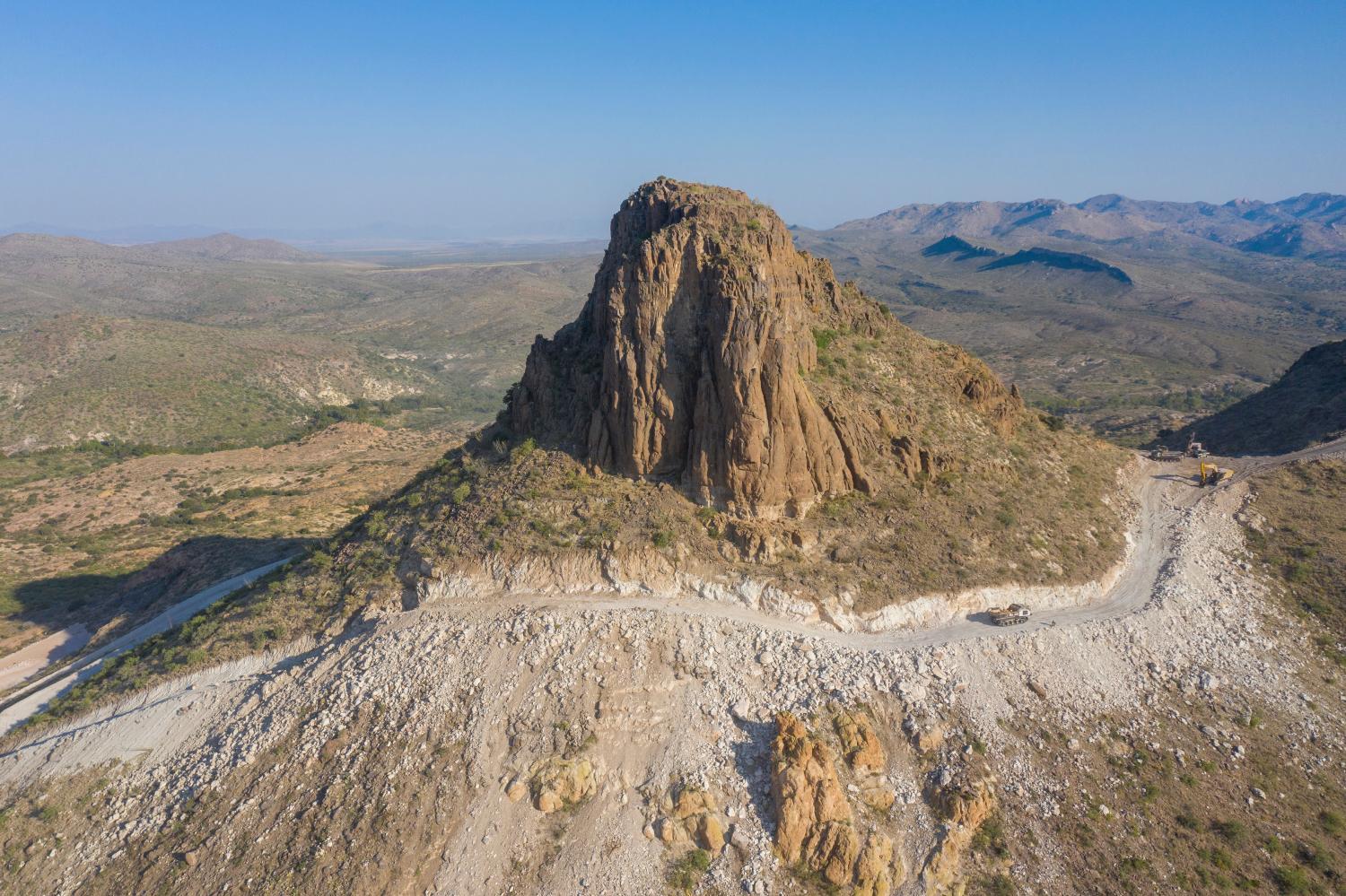 John Kurc
Construction crews blast a road through Guapalupe Canyon in the Peloncillo Mountains on the Arizona-Sonora border. 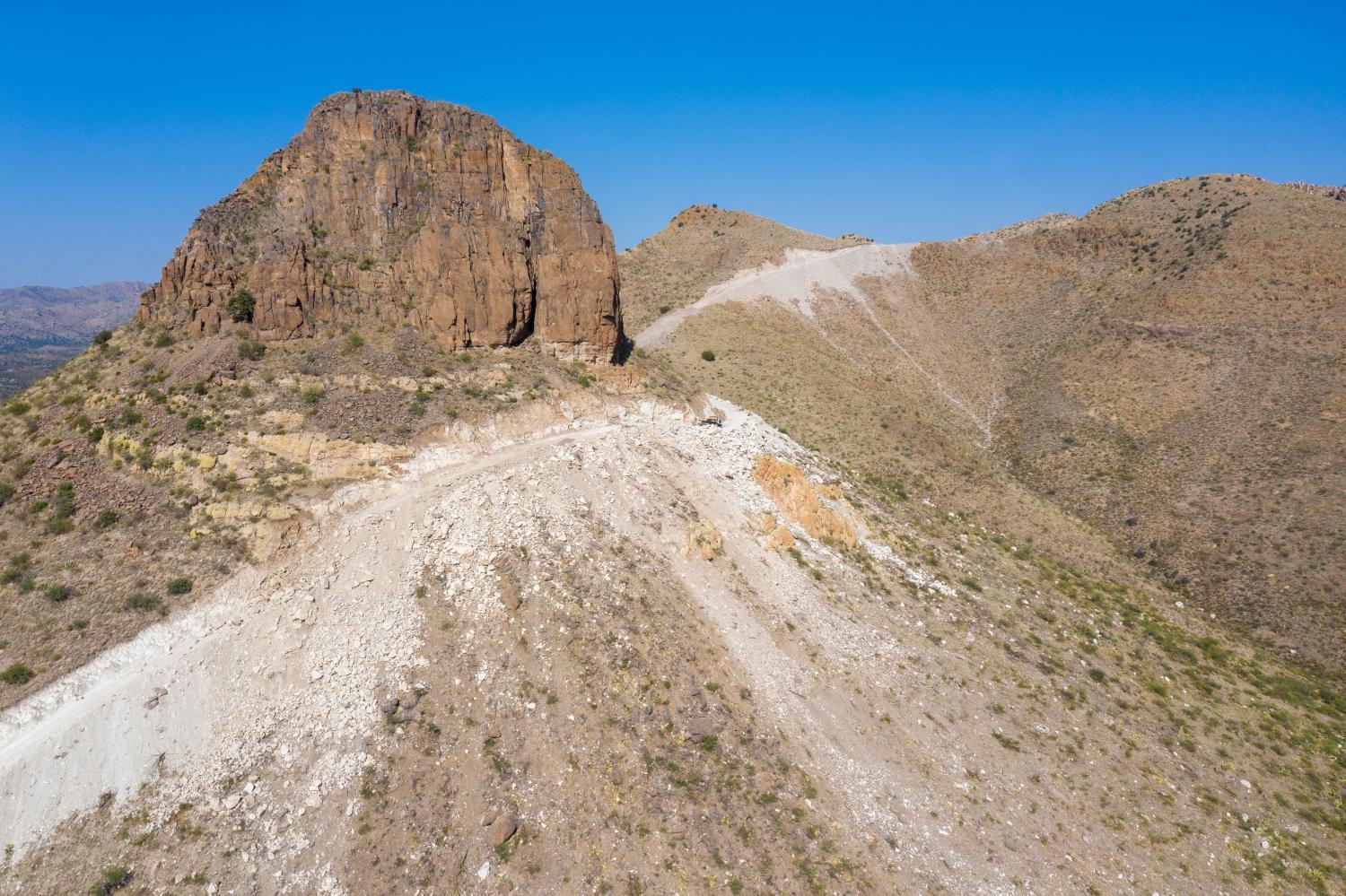 John Kurc
Construction crews are clearing a path for the border wall in a remote area of the Peloncillo Mountains on the Arizona-Sonora border.
Fronteras Sonora