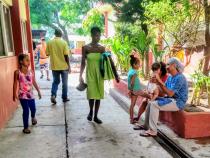 Children also will have their legal status provisionally recognized to avoid the risk of immediate deportation before seeking protective status.

The changes also shift responsibility for housing child migrants and their families to the country’s family development agency and away from the National Immigration Institute.

In 2019, Mexico detained more child migrants than ever before, partially as a result of pressure coming from Washington to stop the arrival of Central American migrants to the U.S.