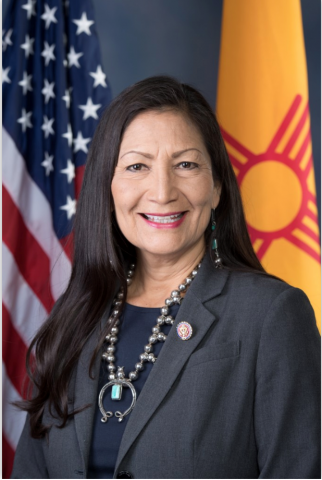 President-elect Joe Biden has named New Mexico Congresswoman Deb Haaland to be his secretary of Interior. The appointment is a historic one because she will be the first American Indian to serve in the post.

The Department of Interior oversees the nation’s parks, forests and natural resources, as well as nearly 600 federally recognized tribes.

Haaland is vice chair of the House Committee for Natural Resources and represents a major oil and natural gas producing state. Tribal leaders and activists around the country lobbied for her appointment.

“We feel that it’s time to see indigenous women in leadership roles. She has served us very well in Congress, and we look forward to her service as secretary of the Interior,” said Maria Dadgar, of the Inter Tribal Council of Arizona.

Haaland is a member of Laguna Pueblo and likes to say she’s a 35th generation resident of New Mexico.

Democratic Arizona Congressman Raul Grijalva, who serves on the House Natural Resources Committee with Haaland, says he couldn’t have thought of a better choice to lead the department.

"To appoint a capable, competent person, a Native American, a woman, Deb Haaland to that position would be not only historic, it would be hugely significant," Grijalva said. "She goes in with a wealth of knowledge about what is wrong, and what needs to be changed administratively,"

Graham Lee Brewer has been covering this selection for High Country News, and he joined The Show to talk about it.