'Rez Metal': Behind The Popularity Of Heavy Metal On The Navajo Nation 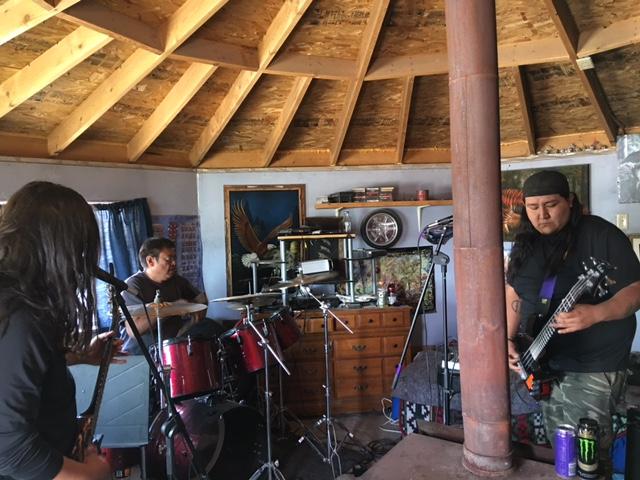 Laurel Morales
I Dont Konform in 2017.

STEVE GOLDSTEIN: Music is one of the few languages that can often transcend cultural differences. You may be more familiar with a style of music because of your background, but that doesn't mean you won't be able to relate to another genre that may seem on the surface remarkably different. Despite the long traditions of the Navajo Nation and its music and storytelling, one very modern kind of tune is extremely popular, and it may surprise you: Heavy metal. There are hundreds of bands on the Nation that channel metal and use it as a means of expression and a way to deal with societal challenges. The Navajo band I Dont Konform addresses environmental polluters in their song "EPA."

I DONT KONFORM SONG: To protect her, not infect her. You had one responsibility. To nurture, not to murder, and now you turn your back —

GOLDSTEIN: Ashkan Soltani Stone and Nat Zappia have collaborated on a book about that, it's called ["Rez Metal: Inside the Navajo Nation Heavy Metal Scene"], and they're with me. So, Ash, why is there a passionate audience on the Navajo Nation for heavy metal?

ASHKAN SOLTANI STONE: One of the things about heavy metal in general, that, I would — I mean, there is this notion that heavy metal ... very negative things, and leads to a lot of mental issues, suicide, et cetera. However, I think one thing that I found as a heavy metal fan myself, it's very unique about it. I call it more like as a form of constructive anger, as something that, you know, allows people to really, really find a way to believe that anger in a more constructive way. That's why I think heavy metal has been very popular in that, in supplanting community that's going through some sort of oppression. And I think case of Navajo Nation, there's like a you know, what heavy metal offers in particular is a way to express themselves in a very constructive way, but also connects the youth together because, you know, as you know, the Navajo Nation is spread out. It's the largest indigenous territory in the United States. One of the things that this heavy metal music scene offers is to bring all this youth together and bring them a sense of community where they can express themselves and deal with certain issues that, it's relevant to their everyday experience.

GOLDSTEIN: I think people think of music and storytelling as being a bonding thing. But, but heavy metal obviously is a different generation of that. Does that fit in with any traditions?

NAT ZAPPIA: What I think is so interesting about metal and other musical genres, too, you know, kind of get your question, is that for the Navajo context — but in any indigenous context — it's, you know, a lot of time this is a question of assimilation, assimilation. You know, selling out, tradition versus adopting the foreign culture, whether it be art, music, food, et cetera. And all the bands that we've interviewed for the book, they all said the same thing. Metal is indigenous, metal is Navajo. There's no contradiction. You know, for some there, you know, there is who are kind of anti, you know, maybe just like any, any group of people who see metal as kind of a, you know, they don't get it. It's like loud, it's violent — seems violent, that kind of thing. When you're in that scene, you see that it's, even beyond the therapy part, it is an expression of Native culture.

STONE: Actually, the nature of heavy metal music, which is very drum-driven, it's very similar to a traditional Navajo music. And I think that's something that also could be very appealing to, to that, to the Navajo youth.

GOLDSTEIN: Is this seen as something that is important, again, to, to younger generations to have this release but also have it part of their own identity? But in any way, is this a way to spread information, to spread knowledge about Indian country or the Navajo Nation or Navajo communities to the broader U.S.?

ZAPPIA: I think both. I think, it's not just a few bands. We're talking like hundreds of bands across the reservation and, you know, in other parts of Indian country as well. So there's a full kaleidoscope of motives, I think, you know, and interests. But there is both the internal — kind of the local politics feel that comes in the lyrics. But then there is definitely an external, I mean, that was I sensed from the interviews and being with folks that, again, this is indigenous, but it's a it's a voice in the lyrics. They want to get this message out. They want to connect with, with the larger society through, through music and other native communities, through music. See a lot of similarities with other kinds of genres, from food to, you know, indigenous chefs that are using traditional ingredients for their internal audience and community to affirm their culture. But then also, as they see themselves as liaisons, translators with the larger and kind of a promoter of their culture. So I got the sense that that was, and then this is what's great about music, is that you could, it's both a way to express your internal culture and also the way to connect with the larger culture and have a dialogue between and across communities.

STONE: One of the misconceptions about the Navajo youth is that they're very disconnected with modern, modern things, modern modernity. And one of the common things that you hear a lot of musicians would say, well, Navajo music, it's more than just power and flute and you know, the hawk in the background, and that's something that you hear quite a lot. And I think, I think I just want to tell the story of a group of musicians that are, happened to be in Navajo Nation. And I think we can also credit the, the internet. Because of the internet, they have the platform to showcase their work, but also to reconnect with different bands and, and promote internationally. And I think. I think that was the reason that, you know, Flemming Rasmussen, the Grammy Award-winning producer of Metallica, was very surprised when he heard the demo reel of one of the bands. And I think that's really, you know, inspired him to travel and to see it for himself, what's happening over there.

GOLDSTEIN: What is the next level of impact for this? What does the next level of impact need to be? Does it have to turn into something bigger or can it be what we've discussed, that something is, that is an outlet. That for certain artists it is going to become something bigger, but if it stands as just an expression of the angst, of culture, whatever it may be, or does it need to take that next step and have a bigger impact, and do you think it will?

ZAPPIA: It's what, where native people want to take it, where the communities want to take it. And I think this is what a lot of these kinds of stories, kind of like the the hidden in plain sight type of story or the kind of like, "Wow, I didn't know that" type of story is the, you know, then the question is from the outsider, someone who's not from the community who's, "Oh, you guys should do this or this or this." What's different about now, I think, is that native — because as Ash said, with the internet and there's more of an awareness generally than there was to say, even 30 years ago of the non-native, you know, not a Native America, a little more nuance, and therefore that now there's an opportunity to, to have this intersection of native and non-native through art and other forms of expressions.

STONE: Just to add to that, what I really hoping to achieve is to inspire people to, to look at the native issues to a larger and broader lens.

ZAPPIA: We should also mention that current president of the Navajo reservation, he's a big time metalhead, and — he's amazing.

STONE: That's also something else that they're mentioning, that, that is the government. There's a gradual change in the government, and that's why they're letting people use the government facility to have metal shows, etc. So I think that's also an indication of you know, things are changing.