Mexico and Spain Plan To Promote Spanish Language In The U.S. 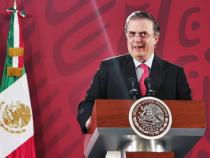 MEXICO CITY — The U.S. has the second-most Spanish speakers in the world. No. 1 is Mexico, which is planning to team with Spain to promote the use of the language in the U.S… mainly as a tool against hate speech.

Mexico's secretary of foreign affairs signed an agreement with the Cervantes Institute, a cultural public organization from the government of Spain.

The main goal is to promote the usage of Spanish and highlight the importance of cultures created from it.

Secretary of Foreign Affairs Marcelo Ebrard said one objective is to help Hispanics in the United States, who have been victims of hate speech and racist attacks. In fact, the idea was initiated after the mass shooting targeting Latinos at an El Paso Walmart in 2019.

Mexico will also lead the launching of the César Chávez Digital Institute for Spanish in North America in 2021, focused on empowering the Hispanic community in the U.S. through Spanish.