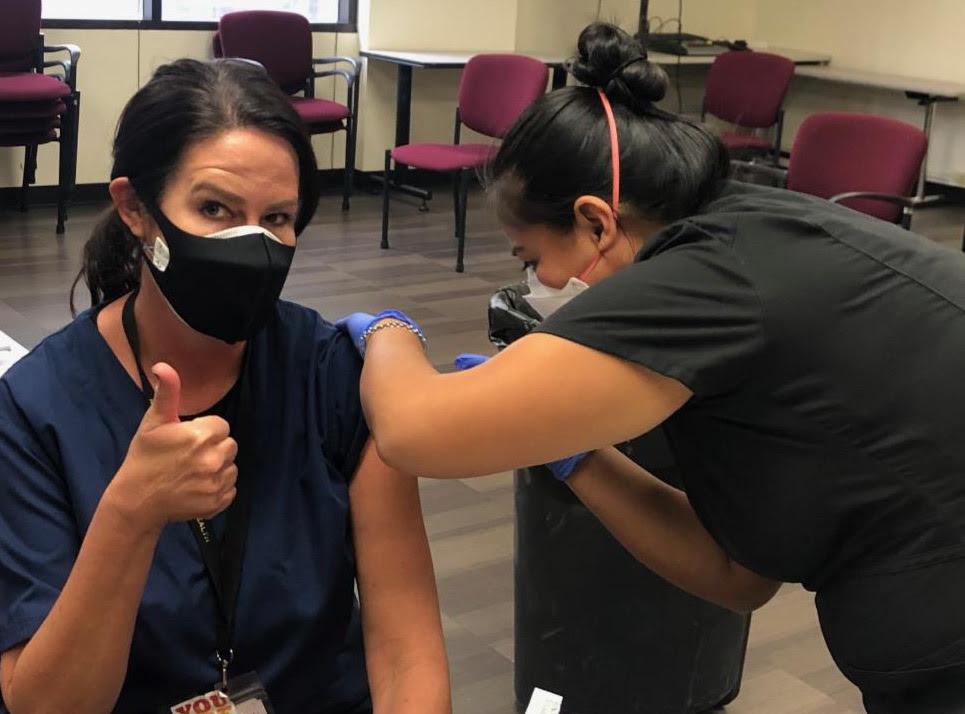 Native Health
Dr. Diana Dunigan, a pediatrician with Native Health, gets vaccinated for COVID-19. The health care system has received Pfizer and Moderna vaccines and begun distributing them to patients.

Native Health hosted a COVID-19 testing blitz and flu shot clinic Saturday at the Pascua Yaqui tribal headquarters in Guadalupe. The health care system has also visited over 500 homebound patients in Guadalupe to test for COVID-19 since last summer.

These are small ways the health care system is getting face-to-face to overcome disinformation and distrust of the new vaccines, said Native Health CEO Walter Murillo.

"That's a sore subject, I think, with American Indians in this state. And, if they think of it as research or as experimental, there's a natural reluctance," Murillo said. "They also carry the reluctance of the general public, in that this is developed under emergency authorization, without the years and years of clinical trials, and (they) wonder if that really has been working for Native Americans."

Murillo estimates 40 percent of eligible Native Health patients are declining COVID-19 vaccines so far, which is on par with the wider population, according to surveys from the Pew Research Center.

Saturday's event was in partnership with the Maricopa County Department of Public Health, Pascua Yaqui Tribe and the town of Guadalupe. Native Health has been providing drive-thru COVID-19 testing for new and existing patients at its three locations from 8 a.m. to 5 p.m. Monday through Friday. For more information or to schedule an appointment, please call 602-279-5262.

The Navajo Nation quickly became a COVID-19 hotspot at the start of the pandemic. The tribe, wanting to ensure a COVID-19 vaccine would be effective for its people, said it would welcome Pfizer clinical trials on its reservation spanning Arizona, New Mexico and Utah.

Right away, tribal members accused their government of allowing them to be guinea pigs, pointing to painful times in the past when Native Americans didn’t consent to medical testing or weren’t fully informed about procedures.

A Navajo Nation review board gave the study quicker approval than normal after researchers with Johns Hopkins University’s Center for American Indian Health made the case for diversity. Without Native volunteers, how would they know if tribal members responded to vaccines the same as others?

“Unfortunately, Native Americans have effectively been denied the opportunity to participate in these clinical trials because almost all of the study sites are in large, urban areas that have not done effective outreach to Native Americans,” said Dr. Laura Hammitt of Johns Hopkins.

About 460 Native Americans participated in the trials for the vaccine by Pfizer and its German partner BioNTech, including Navajos. The enrollment reflects a growing understanding of the role that people of color play in vaccine development and the push to rapidly deploy it to curb infections among populations that have been disproportionately affected by the virus.

Yet, few of the country’s 574 federally recognized tribes have signed on for the studies, a hesitation often rooted in suspicion and distrust. Many tribes also require several layers of approval for clinical trials, a challenge researchers aren’t always willing to overcome and don’t face in the states.

While vaccines from Pfizer and Moderna roll out across Indian Country, others are being studied.

In the Pacific Northwest, the Lummi Nation and the Nooksack Indian Tribe plan to participate in a vaccine trial from another company, Novavax Inc. A Cheyenne River Sioux researcher plans to enroll Native Americans and others in South Dakota in the Novavax trial and another by Sanofi and GlaxoSmithKline.

On the Navajo Nation, Arvena Peshlakai, her husband, Melvin, and their daughter Quortnii volunteered for the Pfizer trials.

Arvena Peshlakai said the rumors were rampant: Navajos would be injected with the virus, and researchers would use plasma from people who got COVID-19.

She was assured that wasn’t happening and let the words of her parents and grandparents guide her: Don’t let our struggles be your struggles, begin with our triumphs.

“What else am I supposed to do? Just sit back and say, ‘No, I don’t trust them’ and not try something new to see if we can find a breakthrough?” Peshlakai said. “We have to do something, we can’t just sit by and wait and hope and pray.”

She overcame her fear of needles to get the doses and keeps track of her well-being daily on an app. As trial participants, the family can get the vaccine if they initially received a placebo.

The Pfizer trials among the Navajo and White Mountain Apache tribes enrolled 275 people, about 80% of them Native American. Hammitt said enough people participated to compare immune responses in Native patients to others.

“It must be done with respect for tribal sovereignty and knowing that each individual has truly been given informed consent,” said Abigail Echo-Hawk, director of the Urban Indian Health Institute in Seattle.

It helped that Johns Hopkins has a decadeslong history with the Navajos and Apaches, including other clinical trials. Hammitt said the Navajo Human Research Review Board was receptive to a quick review of the vaccine trials because of the devastating impact of the pandemic.

In South Dakota, the Cheyenne River Sioux tribal health committee initially pushed back on Dr. Jeffrey Henderson’s proposal for trials of the Novavax vaccine. Henderson, a tribal member, was sent into the community to gauge support.

He expects to get approval from a newly seated tribal council but for now, plans to set up a mobile unit outside the reservation.

“We refuse to do this type of research or any research within the boundaries of a tribe without having explicit approval from the tribe,” Henderson said.

“I expect a slow start to it, and we have to get a few brave people who are comfortable with it and then people to follow,” he said.

The nearby Lummi Nation is moving forward with a three-part review and approval process for the Novavax trials.

Initial hesitation among the tribe stemmed from a researcher who took photos of Lummi children years ago to develop a tool to diagnose fetal alcohol syndrome but didn’t offer any ways to address it, said Dr. Dakotah Lane, executive medical director of the Lummi Tribal Health Clinic.

“I had already known and was aware of certainly some distrust with any kind of research within our community,” Lane said. “But I also knew the only way out of this pandemic was with access to vaccines.”

Other stories about the sterilization of Native American women, noted in a 1976 federal report, and military testing of radioactive iodine on Alaska Natives have bred distrust.

The Havasupai Tribe also settled a lawsuit a decade ago that accused Arizona State University scientists of misusing blood samples meant for diabetes research to study schizophrenia, inbreeding and ancient population migration without the tribe’s permission.

That case came to mind when Annette Brown, a Navajo woman, heard about her tribe’s willingness to participate in COVID-19 vaccine trials.

“There’s this historical distrust when it comes to any type of experimenting,” she said. “It’s just experience, I don’t know that there are many families out there who haven’t been touched by some sort of experimentation (or) biological attacks on tribal communities.”

Brown has mixed feelings because she previously participated in a vaccine trial with Johns Hopkins.

In separate research, the Johns Hopkins University’s Center for American Indian Health determined the first generation of vaccines for bacterial meningitis was less effective among Navajo and Apache children 6 months and younger, Hammitt said. The rate of the disease used to be five to 10 times higher among those children than the general population.

Researchers and doctors in Native American communities also have found that standard doses for medications like blood thinners weren’t always the best fit for tribal members.

For Marcia O’Leary, helping with a study that indirectly discovered HPV vaccines don’t protect against a strain that’s a leading cause of cancer among Native American women in the Great Plains shows the importance of having more Native researchers and being involved in clinical trials.

“We can’t wait for this to trickle down,” said O’Leary, director of Missouri Breaks, a small Native American-owned research group on the Cheyenne River Sioux reservation. “It seems like in Indian Country, we keep chasing the ball of health and we never get ahead of it.”