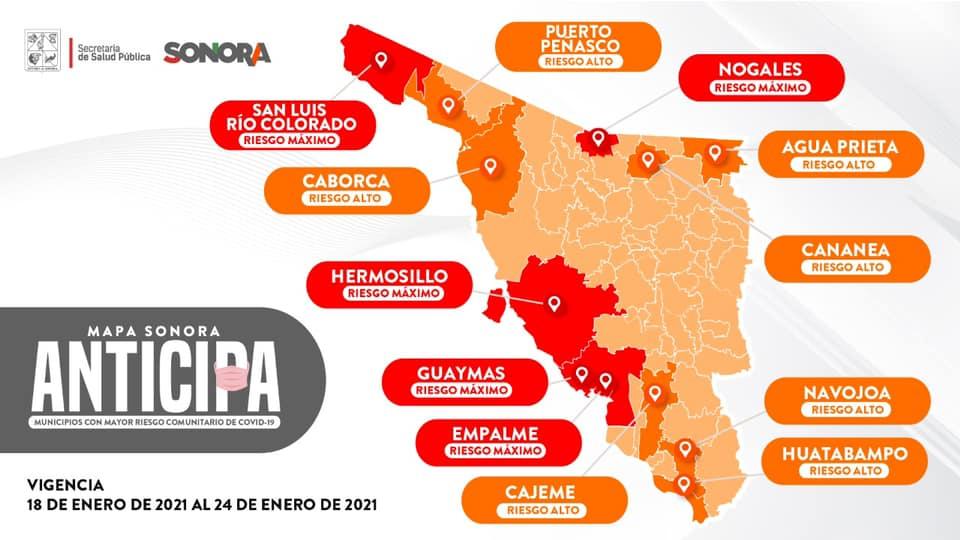 Gobierno de Sonora
There are now five municipalities in Sonora considered red, or at maximum risk for coronavirus spread.

Last week, three cities in Sonora, Mexico, were officially classified as red — or maximum risk for coronavirus spread. Now two more cities are being added to the designation.

There are now five Sonoran cities facing stricter pandemic restrictions as part of the state’s Codigo Rojo (Code Red) strategy, which is determined by factors including test positivity rate, mortality and hospital occupancy.

The capital Hermosillo, and border cities San Luis Rio Colorado and Nogales were designated as red last week. Now, the coastal towns of Guaymas and Empalme have been added.

On Saturday, State Health Secretary Enrique Clausen also announced that Sonora had hit a record high for the number of new coronavirus case and deaths reported on a single day since the start of the pandemic.

There have been more than 56,000 reported coronavirus cases and 4,500 deaths in the state, according to official data. However, because of limited testing the real numbers are likely significantly higher.