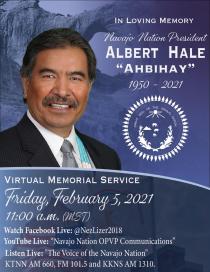 Hale was the Navajo Nation’s second president, serving from 1995 to 1998. He became a leading advocate for tribal sovereignty, and later served in the Arizona Legislature from 2004 to 2017.

“He put his life on the line, for all of us, in this pandemic. We will always remember him for that sacrifice,” said Nez. “The message that I remember him saying throughout these months is to take care of yourself, to protect yourself from this virus.”