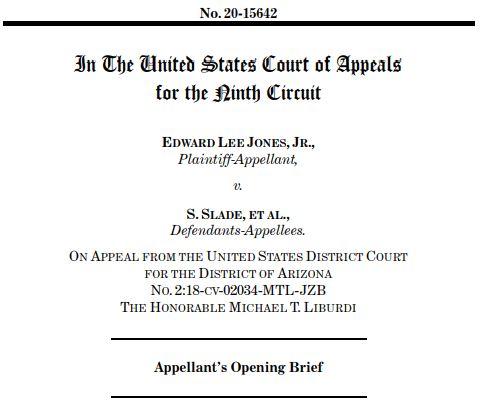 Johnny Cash famously sang about shooting a man in Reno, “just to watch him die'' in his legendary “Folsom Prison Blues.” In the song “Money Trees,” Pulitzer Prize-winning rapper Kendrick Lamar proclaims “the one in front of the gun lives forever.” While both songs depict gun violence, only one is banned in Arizona prisons.

When an inmate receives a letter, magazine, book or CD in the mail, prison administrators review the materials first. If the items fall within one of several broad categories established by Arizona Department of Corrections guidelines, the inmate is denied the material. Reasons for exclusion can include “depictions of street gangs” to “descriptions of drug paraphernalia.”

While the department has made revisions, the guidelines for these publications have been repeatedly ruled to be unconstitutional in federal court because they were overbroad. Now, an inmate in an Arizona state prison is suing the Department of Corrections, alleging the guidelines are being applied unevenly.

Easha Anand, Supreme Court and appellate counsel at the Roderick & Solange MacArthur Justice Center, is representing Edward Lee Jones, an inmate at the Eyman state prison in Florence. Anand says under the First Amendment, prison officials have to apply any regulations neutrally.

“In this case, the Arizona Department of Corrections confiscated a Kendrick Lamar CD from Mr. Jones, supposedly because it promoted violence and had sexual content,” Anand said. “Yet at the same time, inmates are allowed to watch violent TV shows like ‘Dexter,’ read James Patterson books that describe rape, and listen to country music songs about cold-blooded murder.”

Anand says prison officials are applying the policy selectively to ban some artists and materials while overlooking violent and sexual content in other materials.

“And that’s exactly what the First Amendment protects against,” she said.

Jones lost a previous complaint over the confiscated CDs in the U.S. District Court of Arizona, and Anand is now representing him in an appeal to the 9th U.S. Circuit Court of Appeals.

The ACLU and the Becket Fund For Religious Liberty are supporting Jones in amicus briefs filed to the 9th Circuit.

Anand says the District Court ruling suggested Jones had “other available alternatives” like country music to listen to, a decision she calls “dangerous.”

“Any of us would say that country music is not an alternative to Kendrick Lamar,” Anand said. “Music that feels like the right form of expression for you is not interchangeable.”

Anand says they are arguing on appeal that the prison has a broad policy that sounds neutral, but is actually being used to suppress certain forms of expression, “namely rap music and R&B music — both of which happen to be quintessentially produced by Black artists.”

“We’re arguing that Mr. Jones’ rights to freedom of speech are being abridged,” Anand said. “It’s been well established by the courts that the right to receive certain forms of expression is part of a prisoner’s First Amendment rights.”

A spokesperson for the Arizona Department of Corrections declined to comment on ongoing legal matters.

Prison officials have broad discretion to maintain security, but there are constitutional limits on what they can do.

In a ruling issued in 2019, U.S. District Court Judge Roslyn Silver found the department’s policy on banned media “violates the First Amendment on its face.”

In her ruling, Silver referred to Department of Corrections' “sweeping definition of sexually explicit material” as “facially overbroad” and she ordered the department to review its guidelines.

In one instance, the department had banned copies of the publication Prison Legal News, because they contained court documents that described accounts of correctional officers sexually assaulting inmates.

The ACLU sued the Department of Corrections in 2019 for banning "Chokehold," a book by former prosecutor Paul Butler that calls for significant changes in the criminal justice system.

The Department of Corrections also maintains a database of banned material. A 2019 review of the database by KJZZ revealed more than 5,000 publications were banned in Arizona prisons at the time.