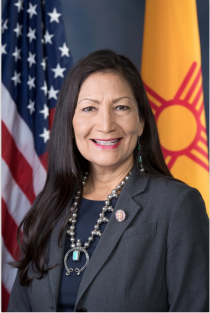 Another Senate confirmation hearing for one of President Biden’s Cabinet is scheduled later this week. If approved, this would be a first in the nation’s history.

Deb Haaland would be the first Native American to lead a Cabinet agency if confirmed as secretary of Interior. She is a member of the Laguna Pueblo tribe in New Mexico.

A confirmation hearing is scheduled for Tuesday. Haaland is expected to have enough votes to secure the post, despite Republican opposition over her support of the Green New Deal.

President Biden has committed to regular consultation with tribal nations on federal policies and projects that affect them. The Interior Department has scheduled a series of talks with tribes in March on health, the economy, racial justice and the environment.

Haaland has served two terms as a U.S. congresswoman from New Mexico.