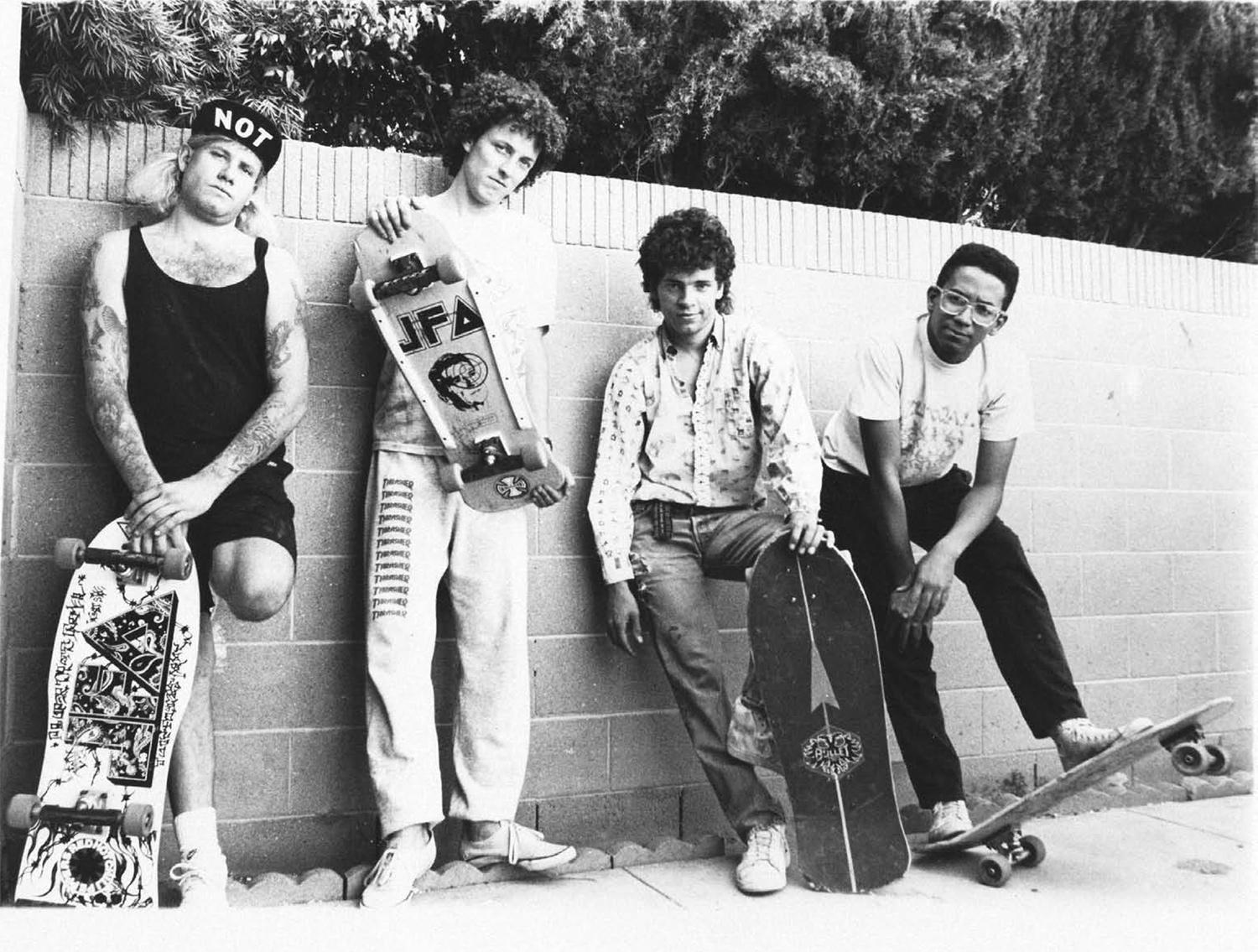 STEVE GOLDSTEIN: Forty years ago, the raw, aggressive punk scene of Southern California had drifted east and was picked up by skateboarding youth who felt no connection to the overproduced arena rock that dominated the FM airways at the time. In 1981, a group of Phoenix musicians from various punk bands coalesced to form Arizona's contribution to the West Coast punk scene. Jodie Foster's Army came together with an amalgam of the [Los Angeles] (LA) County thrash found in Black Flag and The Germs with the twangy surf guitar that defined The Ventures and Dick Dale. Named the day after an attempt on President [Ronald] Reagan's life, Jodie Foster's Army, or JFA, appealed to skaters who saw themselves taking surf culture to the streets. The band has released numerous albums and bootleg cassettes of their shows from the early '80s, and they continue to be traded by aficionados. The band celebrates its 40th anniversary this year, and we are joined by founding member Brian Brannon. So, Brian, describe for us what the Phoenix area was like then for the punk scene. How did it advance in that realm?

BRIAN BRANNON: Well, when I came into the punk scene, which was right around 1980, 1981, I was pretty young for, for someone to be in that scene. I was kind of always the baby of the scene. I was 13 in 1980 and 14 when I joined JFA. And the punk scene in Phoenix back then was glorious. There was no limitations on what kind of music you could play, what you could wear, what you could say. You know, just different takes on what it meant to be punk rock. And it really didn't matter. There was no uniform. There was no specific type of music or anything like that.

BRANNON: Yeah, we had a pretty good skate scene back then in the early '80s. So most of the time we're just out there, you know, interpreting surf moves on our skateboards at the skate park or in the pools. There was a really good scene of people who skated these parks, but then the parks closed down. There were a lot of, you know, insurance was an issue because people were getting sued and skate parks were seen as a liability, and there wasn't a good — there weren't laws really protecting, you know, a skate park if some kid did something stupid and broke his leg, you know, and so, so that was rampant. And you saw a huge closure of skate parks across the nation. Skateboarding had to go underground because there's no place else to skate. So all the things we like to skate, you know, people's backyard pools, drainage ditches, giant pipes for irrigation or, you know, they're building the [Central Arizona Project] (CAP) canal.

BRANNON: Those are all illegal, obviously. And so, you know, skating went underground. There was, there's a great skater named Rick Blackhart and he said, "When fun is outlawed, only outlaws will have fun." And that was pretty true, right?

BRANNON: So, and the music at that time just wasn't cutting it. Journey, the arena rock, the ballads, you know, wasn't good to skate to. So that's kind of why JFA came together, because we saw a need for music to skate to.

GOLDSTEIN: Based on how you look and the fact that you're, I mean, put yourself in the punk category, there are going to be a group of people that automatically find you scary, like what are you doing to our community? What do you this — what is it like when you're trying to create music to that? Did it give the creativity a little bit more of an edge, knowing that you guys were doing something pretty unique at that point?

BRANNON: Oh, yeah. There were no shortage of, of stories that were suitable for songwriting that we could, we could lean on. And obviously the, the angst, if you will, of being not accepted and really discriminated against drew out the kind of energy that we put together to play fast and loud and, you know, hard songs. Just to really kind of get that energy out and it's kind of cathartic to play that. And it was also great to go out there and just get in the middle of the slam pit and work out your energy and then come back out and feel like, "OK, I let it all out." And, you know, back then — they call it moshing now, and that's nothing like what it was back then. The slam pit was a very chaotic, protect your face, protect, you know, protect the vital parts of your body, because it was you know, you people were swinging. That was the way — that was slam dancing. Moshing is now just people kind of going around in a circle counterclockwise and pushing each other. That was not how it was back then. And so that, even, even dancing took a bit of commitment back then. But it meant something, and you came away feeling better. I mean, you might have a black eye, you might, you might be punched and, you know, but you did feel better. The first time we played Huntington Beach, we played at the Cuckoo's Nest, which was just a notorious punk rock stronghold. And it was where slam dancing was invented. If you, if you ask anyone from Huntington Beach, of course, and they call it the HB Strut. And that was 1981. We played there with the crowd who were great, great band, they were beach punk. So they weren't really what you would call hardcore. They had a little more of a new wavy edge, but definitely punk. So, you know, after we played, we opened for them. You know, I said, "You know what, I'm going to go out. I want to go on that pit and see, see what it's like to, you know, say that I slam danced in Huntington Beach." Actually Costa Mesa, but you know, home of the HB Strut. As soon as I stepped into that dance floor, I got punched in the face like three or four times, kicked in the ribs. I'm just trying to survive and get out of it, you know? I mean, it was brutal. And this was for one of the bands that, you know, would be considered not very harsh. And certainly I could only imagine what it would have been going out, you know, with Black Flag playing or something like that.

GOLDSTEIN: So much of punk's traditional messaging focuses on youth culture — however, we define that. And now you're, you're 50 plus, and yet you still got the chops, you still have the message out there. What's it like, though, from the difference being being a teenager and doing it now?

BRANNON: We always said we would, we would stop doing it when we weren't having fun anymore. And we're having more fun than ever playing. Mostly because we know what to expect. We know what we want to do. We know how to play the way we want to play, and we like seeing our friends and we know kind of the rhythm. The one issue we have is, you know, a lot of our original fans are dead, in jail, retirement homes. So they're not coming out as much. But the, the young kids, they can really relate to it. Going out there and playing and seeing all these kids dancing and doing the same things that we were doing back then. And it's always been a part of what we're about. That's what, you know, that's what it's all about. And guys coming up and saying, "Hey, I got a pool in my backyard," or "You want to go skate?" And, aw yeah, let's go, man. We may have got an older, maybe a little wiser, but definitely more appreciative.

GOLDSTEIN: That is Brian Brannan of the punk band Jodie Foster's Army, or JFA, which was founded in Phoenix and is now marking its 40th anniversary.