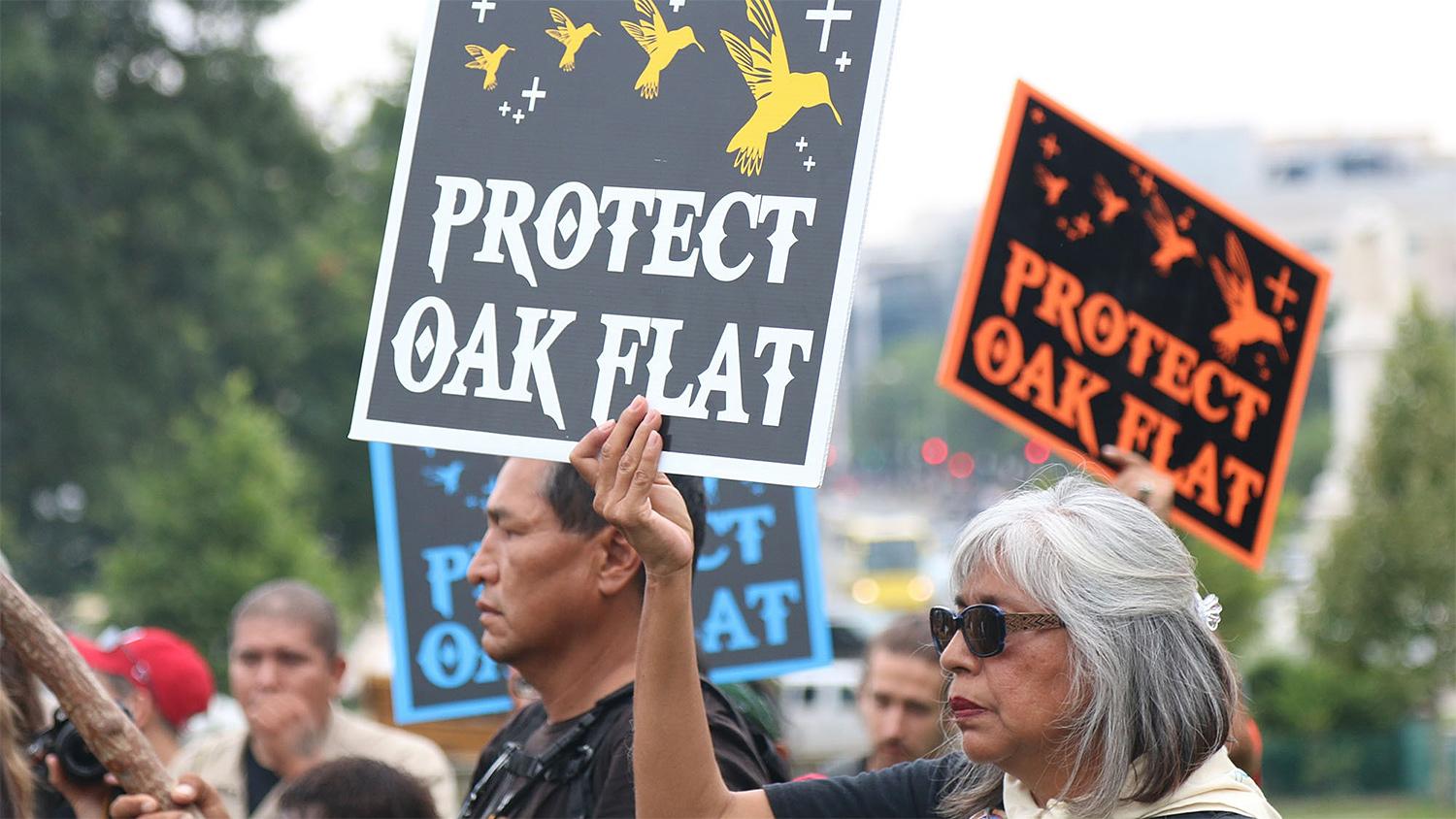 Jamie Cochran/Cronkite News
In this 2015 photo, members of the San Carlos Apache tribe gather at the Capitol to protest a proposed copper mine at Oak Flat.

MARK BRODIE: The Biden administration this week put a pause on a land transfer that would have allowed an international mining company to build a massive copper mine near Superior. The U.S. Forest Service withdrew the environmental impact statement and said it would take some time to review it and gather more feedback. Critics say the Resolution Copper Mine would destroy Oak Flat, an area considered sacred by the San Carlos Apache tribe, and have cheered the decision to pause the land exchange. Supporters of the project, though, including Gov. [Doug] Ducey, argue the mine would bring jobs and economic benefits to the state. With me to talk more about this is Randy Serraglio, Southwest conservation advocate with the Center for Biological Diversity, which has been working on trying to save Oak Flat for many years. And, Randy, I imagine you're happy with this decision, but is it tempered somewhat by the fact that it's not final?

RANDY SERRAGLIO: Well, this is a great relief. It is a reprieve from the impending land exchange. Of course, we feel very strongly that this sacred land should never be traded away to a mining company. And the problem is that the potential for that still exists. So we need to get to a place where Oak Flat is permanently protected, and we need the administration and the Congress to take action and make that happen.

BRODIE: Do you think there's a realistic chance that they will do that?

SERRAGLIO: Well, we've had the Save Oak Flat Act introduced in Congress every year since the original midnight rider that established this land exchange authority back in 2014. So there is a vehicle to repeal the land exchange legislation and overturn this. But, you know, in the past, it's always been blocked in the Congress. But now I think we definitely have an opportunity to get it passed in, in the near future.

BRODIE: So what do your lobbying efforts look like going forward now to try to get both members of the state's congressional delegation, but also the state's U.S. senators to buy into this?

SERRAGLIO: Well, it's very important that U.S. senators here in Arizona see how important it is to protect these kinds of Indigenous sacred sites. You know, there's been a lot of lip service given over the years to consultation, but too many times, over and over, any time polluters want to destroy places like this, they're generally able to move forward with it. And it's just really for their own profits. And, you know, we need a different regime here and some real teeth to protect places like this. It just doesn't make any sense at all to sacrifice something that's at the core of Apache culture and religion just so some huge international mining company can get rich off of it.

BRODIE: At this point, do you need Congress to act? Is it something the Biden administration could just reject at this point and not do?

SERRAGLIO: Well, the Biden administration certainly could provide more leadership on this issue. They can help us generate support for it in the Senate. They could also take a different approach administratively in how this analysis goes forward. You know, it was kind of a final act of corruption on the way out the door for the Trump administration to publish this sham environmental analysis and set the clock ticking on the land exchange in the first place. So, you know, we need the Biden administration to recognize that and to see that this proposal would totally destroy Oak Flat. There's no way that you can have a mine and have Oak Flat persist in its integrity and its importance to the Apache people. It's one or the other. And we need the administration to get real about that.

BRODIE: Is there a way to modify the mine proposal in some way? Because, you know, supporters, including Gov. Ducey and others, have pointed out the number of jobs and the economic benefit, which is substantial, they say, to the state of having this mine. Is there a way to do that without destroying Oak Flat?

SERRAGLIO: Well, first of all, I would address the second on a question. Too often people just take mining companies numbers at face value. And, of course, the mining company wants you to look at the economic impact as only one sided. They want to look at it in a vacuum. They don't want to look at the damage that it will do to our economy if they use the same amount of water as the entire city of Tempe every year or if they contaminate the groundwater that we rely on in Arizona. You know, our water future is increasingly insecure. We are going to have shortages on the Colorado River. It's just a matter of time, and that time is rapidly approaching. It makes no sense to sacrifice so much of our precious groundwater to this company for this proposal — that in itself has a major negative economic impact on Arizona's economy. And I just wish people would start to look at this as more of a cost-benefit analysis and less as just, you know, taking the company's numbers at face value.

BRODIE: But in terms of the numbers that, that the company and supporters say, I mean, there, there certainly will be jobs added if there is a new mine here, there's some economic benefit to that. Is there a way to compromise here? Is there a happy medium to be had to have some of that while also maybe mitigating some of the negative environmental consequences?

SERRAGLIO: Yeah, a project like this cannot be mitigated. We're talking about total destruction. Oak Flat is going to sink into a crater that's 2,000 feet deep and a mile wide or, I'm sorry, a 1,000 feet deep and 2 miles wide. And, you know, I mean, Arizona will lose jobs in the ecotourism industry that puts billions of dollars into our economy every year, you know, as a result of destroying places like Oak Flat. And again, you know, that's the compromise. The compromise to me is to look at this issue honestly and talk about both sides of the economic equation. No, you either have this mine and destroy Oak Flat or you don't.

BRODIE: What is the timeline going forward? Now, you referenced this as a reprieve. There is still a clock ticking here, right? I mean, what has to happen now?

SERRAGLIO: The clock has actually stopped ticking for the time being. The land exchange is off for now. The, the federal government said in their statement on Monday that they would take several months to look at this more deeply, make sure that the environmental analysis complies with the law. And, of course, in the lawsuit that we have filed with, with various allies, we think we've proven pretty clearly that it does not comply with the law and that this environmental analysis should be scrapped and they should start over.

BRODIE: All right. That is Randy Serraglio, Southwest conservation advocate with the Center for Biological Diversity. Randy, thanks for your time. I appreciate it.

SERRAGLIO: Yeah, thanks for having me, Mark.