University Of Arizona To Digitize Over 6,000 Recordings Of Native American Oral History

STEVE GOLDSTEIN: As researchers have been learning for decades, digging into history can be more challenging when elements include newspapers and analog tapes, for example, because aging can be rough on them, rendering them brittle and sometimes unusable. So digitizing is a priority, and that's an important step that will be taken for oral histories of Native Americans that were recorded in the 1960s and 1970s. Thanks to a grant from the Doris Duke Charitable Foundation, the University of Arizona and six other institutions will work on getting more than 6,500 recordings digitized. With me to talk more about the project and its goals, as Alyce Sadongei, project coordinator for the American Indian Language Institute at the UofA. So, Alyce, why is this development so important and what sort of outreach will this make possible?

GOLDSTEIN: Oral histories of whom and from what periods of time?

SADONGEI: So the oral histories, this is from the Doris Duke collection. So the Doris Duke Foundation has funded this project. The University of Arizona is one of, I believe, maybe seven universities that are participating in this project. Doris Duke back in the '60s had an opportunity to ask universities, work with universities to collect oral histories. She wanted to do oral histories because at that time, civil rights was happening across the country, voices that hadn't been heard before were being given voice through legislation, through protest, through all of this social change. Prior to that, a lot of Native American history was not written or collected by native people for native people; it was done by others. And this project was an attempt to have the native histories told by native people. But of course, it was filtered then by the researchers who then conducted the interviews. So that was very beginning of this work. The genesis of this project was to try to collect oral histories at that time. The importance of getting this information digitized and returned to tribes is important because it then gives them a tool to maybe listen again, to reevaluate some of the information that was shared at that time and be able to use it again for whatever purposes they may have. Some tribes are restoring ecological sites on their land now. Maybe there's something in there that could be useful to them. A lot of this information has to do — it's, it's an array of material. At the University of Arizona, inventory includes educational, graduate — their graduation ceremonies that were recorded, their tribal council meetings, minutes of important meetings to deal with land and cattle and all of this sort of government stuff that was going on in addition to some maybe or — autobiographies, more or less, of people just telling their stories. 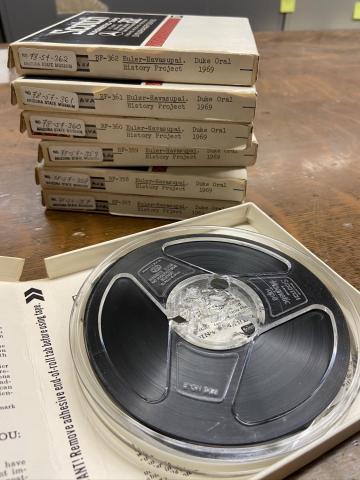 GOLDSTEIN: Let's go back to what you said about the utilization of this history as a way to maybe gain more insights to deal with what's going on today. And I think that's one of the most intriguing and most important parts of history, is when not only do we learn about what happened to other people, but also try to put it in context to our current lives. How important a part do you think that's going to play?

SADONGEI: It depends on what the tribes want to do with it and what they find, because, as I said, this is — I just got a kind of overview of the collection. So it's going to take some tribal researchers getting in, getting in there and seeing what they can do and what kind of influence it could have. But I, I agree with you. I think that it could have — it depends on what they want to look at or to study, how they want to apply it. But I think that there's certainly room to re — let's just say reevaluate that material in terms of what's happening today.

GOLDSTEIN: Will there be potentially ways of, if, in fact, tribes want to, to give more and more people access to it? Will there be ways to maybe help people who don't have the advanced technology to look at it to some extent?

SADONGEI: That's a, the latter is a good question, and I don't know about that. I hadn't thought about that, actually. I do think that some of this, depending on the collection, like at the University of Arizona, I don't think that, I mean, this project will enable them to digitize. So there are some hard copies, so to speak. But that, again, will be decided in consultation with tribes about, of course, they'll get that material, but maybe how they access that or how they can help preserve that might be something we discover together. But the whole point is to digitize these. And again, that is important, I think, just because of technology now and how people are gaining information, accessing information. And the tribes, there are many tribes that have their own archives now, their own cultural centers and museums, which they didn't maybe have in the '60s. I think that sort of movement was just starting to happen in some cases, but I think that the tribes themselves are very — they're more, they're — they can take care of these materials. They have the technology. They have the institutions. They have the staff to, in most cases, to take care of this.

GOLDSTEIN: As someone who's been involved in this for the number of years you have, whether it's with the, the state museum or whatnot, how exciting a development is this? It's always, it always seems really cool to have projects like this to, to really dig into and see how much they can help advance history and advance just people's knowledge of things. Are you excited about this generally?

SADONGEI: Yes, I am. I used to work at the Arizona State Museum, and this has always been a collection that was of interest to tribes, they'd hear about it, they wanted to access it but it had been a problem in dealing with getting permissions, ranging who is going to — who could listen to what? Because at the time that this material was collected in the '60s, many of the work was collected by grad students at the University of Arizona. It was through the anthropology department. So they didn't know what they had, some of this stuff, and some of it might have been restricted by the researcher. So that was another roadblock into trying to get access like, well, they have to lift the restrictions off this material. Maybe a family member didn't want someone to hear something. Maybe it was deemed sacred and sensitive at the time. All of that had to be worked through. And I know that it was often frustrating in order to work through those to get access to materials. So, so it is exciting that we will be able to work on that and be able to return these. The project allows for consultation with tribes, is expecting consultation and working with communities. So that's the other helpful thing about this project.