The Navajo Nation Took A Hard Stance Against COVID-19; Experts Say It Worked 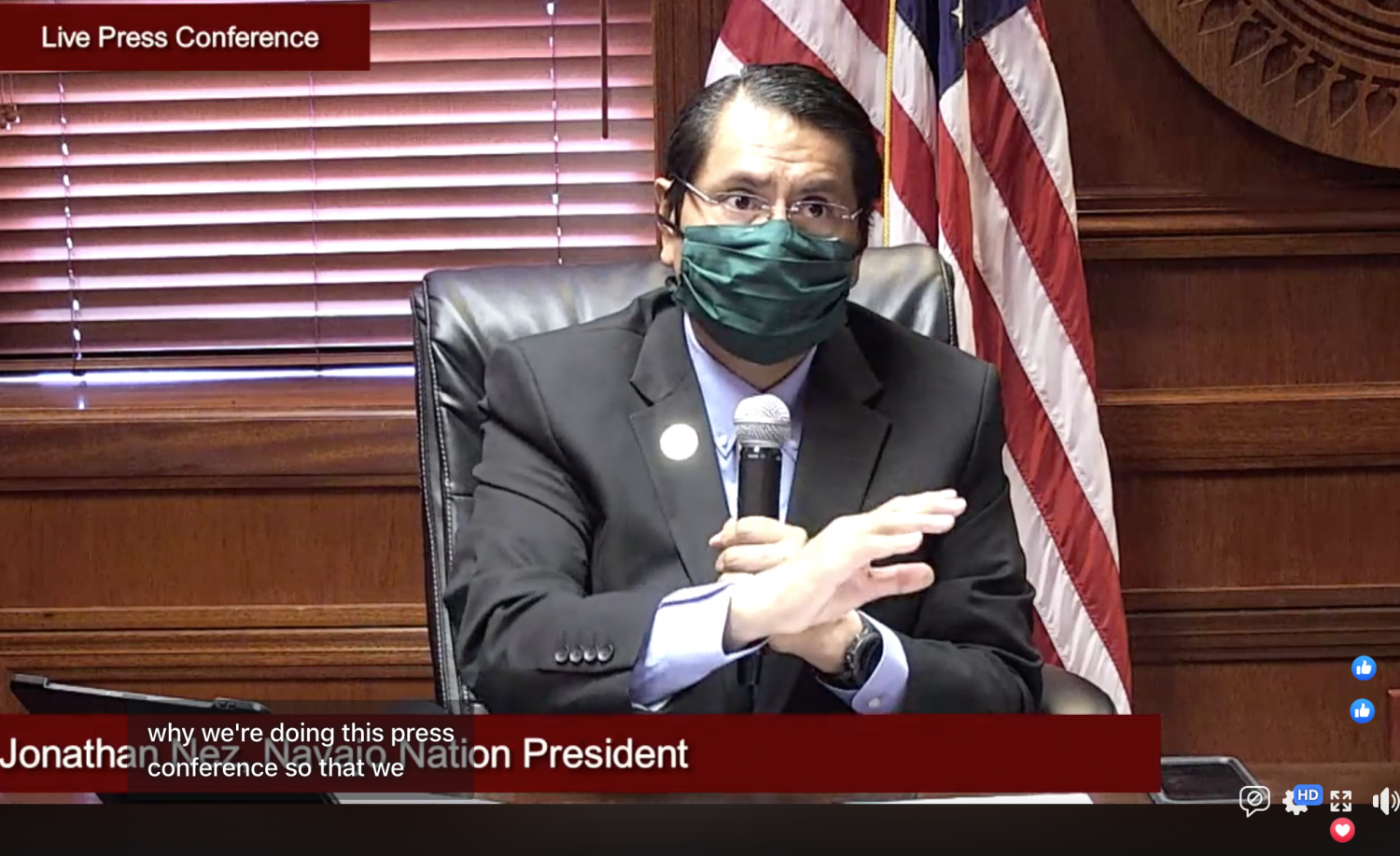 Navajo Nation Office of the President
Navajo President Jonathan Nez at a press conference in May 2020.

In early December, doctors from across the Navajo Nation spoke in a live streamed town hall event. They described an utter crisis.

"What we see is really unprecedented," said Dr. Quida Vincent with the Northern Navajo Medical Center.

"This has gotten to the point even that we are competing for oxygen supplies," said Dr. Loretta Christensen with the Navajo Area Indian Health Service.

COVID-19 has wrought unfathomable devastation on the Navajo Nation. The reservation, which stretches from northern Arizona into Utah and New Mexico, has about 170,000 residents. One out of every 140 of them has died of the virus over the past year. That rate of death is three times higher than Arizona’s. It’s higher than that of any U.S. state or any country in the world. But a year into the pandemic, the Navajo Nation has managed a dramatic turnaround in its outbreak and is now outpacing Arizona in administering vaccines.

“We didn’t feel sorry for ourselves or give up," said Jonathan Nez, president of the Navajo Nation. "We utilized the limited resources we had and stretched it."

Nez said when the pandemic hit, his community was already facing barriers to health care.

Many Navajo get health care through the federal Indian Health Service. But decades of underfunding of that agency have contributed to widespread health issues that made Native Americans vulnerable to COVID-19, according to Agnes Attakai, a member of the Navajo Nation and director of Health Disparities Outreach and Prevention Education at the Mel and Enid Zuckerman College of Public Health at the University of Arizona.

“You had a population who had suffered one of the top rates of diabetes and heart disease and lung disease," Attakai said.

Attakai points out the U.S. spends an average of over $11,000 per person on health care. The federal government budgets less than half that per person for the Indian Health Service. With limited resources, Attakai said, many Native Americans miss out on important wellness checks or preventative health care.

But treaty agreements that give many tribes a federal health system also grant powers of tribal self-governance. And President Nez’s strict response to the pandemic stands in stark contrast to that of many U.S. lawmakers, including Arizona Gov. Doug Ducey.

Arizona’s stay-at-home order lasted about six weeks last spring. The Navajo Nation has been under various lockdowns or curfews for most of the past year.

Arizona has never had a statewide mask requirement and Ducey prohibited city or county mask orders until mid-June. By that point, Nez had already been requiring masks on the Navajo Nation for two months.

“If you look off the Navajo Nation, people would see a mask as a political statement," Nez said. "Here on Navajo, wearing a mask is just showing that you are a warrior, and that you’re helping yourself and your community."

"If you look off the Navajo Nation, people would see a mask as a political statement. Here on Navajo, wearing a mask is just showing that you are a warrior, and that you’re helping yourself and your community"
— Jonathan Nez, Navajo Nation president

Nez points out the U.S. has seen three waves of the virus; the Navajo Nation has seen only two. In fact, while cases surged across Arizona in June, cases on the reservation were declining.

But by late fall, cases were rising again on the reservation and statewide. Nez responded with more curfews, but Arizona kept most businesses open, even as the outbreak soared past previous records.

"We look at it as a bubble," Nez said. For months, he has urged Navajo residents not to travel off the reservation and has discouraged Navajo citizens who live outside the reservation from traveling home. “It has been a struggle, some jurisdictions around us do not have the same strict protocols in place."

Nez acknowledges his policies have brought a major economic blow to his tribe which had high unemployment even before the pandemic. Beneath many of Nez’s social media posts, you can find Navajo commenters frustrated by prolonged shutdowns.

But Nez’s actions have won the praise of health experts. The nation’s top infectious disease expert, Dr. Anthony Fauci even appeared in one of Nez’s live stream videos to say Navajo policies could be a model for the country.

“You have proven that when you do these public health measures you can turn around a serious surge of infection," Fauci said. 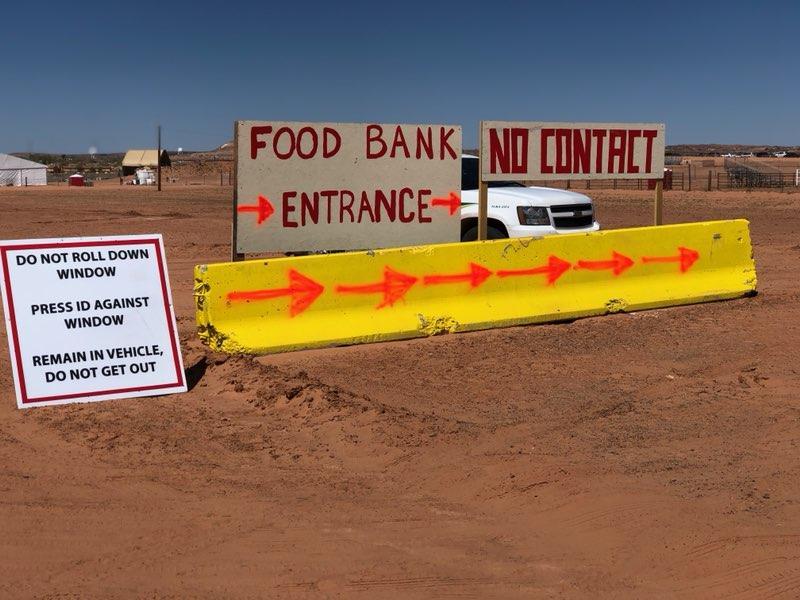 Lauren Tomlinson/St. Mary’s Food Bank
Tribal members stayed in their cars with the windows rolled up as volunteers asked them to hold up fingers to indicate how many people in each family.

Arizona is now reporting a significant drop in average daily COVID-19 cases, but the decline has been even more dramatic on the reservation. The Navajo Nation is now averaging about 13 new positive cases per day — a 95% reduction from the outbreak's peak. Arizona cases have declined about 86% from the peak. In response, Ducey has lifted most restrictions on Arizona businesses. But the Navajo Nation continues to take a more cautious approach, relaxing some restrictions, but keeping many, including a daily curfew and 25% indoor capacity limits for most businesses.

Three months into vaccination efforts, about 30% of enrolled tribal members have had at least one dose of a vaccine. Statewide, just 20% of Arizonans have had a shot. Vaccines are already available to any Navajo adult while Arizona is still working through prioritized groups.

Attakai said even though the Indian Health Service is chronically underfunded, its direct ties to the federal government and wide network within tribal communities gave it an advantage for distributing vaccines quickly. But she also credits the Navajo people for their cooperation with months of public health interventions and their willingness to get vaccinated.

“Because of the care that Native Americans have for elders, for family members, the community was seen as more important than the individual," Attakai said.

After a tragic year, she said, everyone in her community understands what’s at stake.