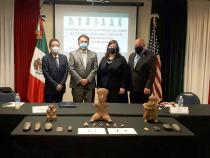 Mexican Government
Mexico and U.S. authorities met in Nogales, where the Department of Homeland Security returned archeological objects to Mexico.

MEXICO CITY — Mexico faces continuous legal battles to repatriate archaeological pieces from other countries. And in Arizona, Mexico just got back hundreds of them with the support of U.S. authorities and local institutions.

The vast majority of the objects were returned by the Department of Homeland Security and were obtained from seizures in 2012. They come from Sonoran archaeological sites, and most of them are tools made out of carved stone, as well as some copper rattles.

Ten of the returned artifacts come from the Chandler Museum and correspond to the Tumbas de Tiro culture. Most of them are ornamented, human-like clay figurines.

The return of the objects from the US to Mexico is in accordance with a 1970 international treaty that prevents illicit import, export and transfer of ownership of cultural property.