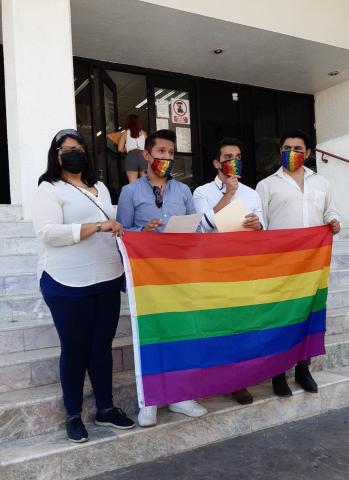 Members of an LGBTQ coalition in neighboring Sonora, Mexico, are asking legislators to reconsider a reform measure that would eliminate barriers to marriage equality in the state.

Last year, a joint committee in the Sonoran Legislature failed by one vote to pass a marriage equality reform that would strike language barring same-sex marriage from the state’s civil code.

Now, the group Coalición Mexicana LGBTTTIQ+ Sonora is asking legislators to take up the reform again — this time guided by experts on the issue.

Rodolfo Guzman, a representative for the coalition that submitted the request, said last time legislators considered the reform, disinformation and stereotypes about the LGBTQ community dominated the conversation. So they want the state Congress to try again.

"We're asking them to take it up again, but this time, of course, inviting legislators to be informed, and listen to those of us who are clearly experts on this topic," he said. "So now we're waiting for them to assign a date to put together a working group to analyze the measure based on our points in favor that are based on rights that already exists. We're not asking for special rights."

Sonora’s family code currently defines marriage only as the union of a man and woman and calls same-sex marriage “legally impossible,” despite a 2015 Mexican Supreme Court ruling declaring such laws unconstitutional.

Guzman said he hopes legislators pass the reform, bringing Sonoran law in line with the federal ruling, within the next several months, before legislators’ terms are up later this year, sending the bill back to square one.