President Joe Biden ends the first 100 days of his presidency next week, a traditional honeymoon period when presidents lay out the first big agenda items of their term. KJZZ reporters bring you a series looking at how decisions will affect Arizona, starting with the border wall along the U.S.-Mexico boundary. 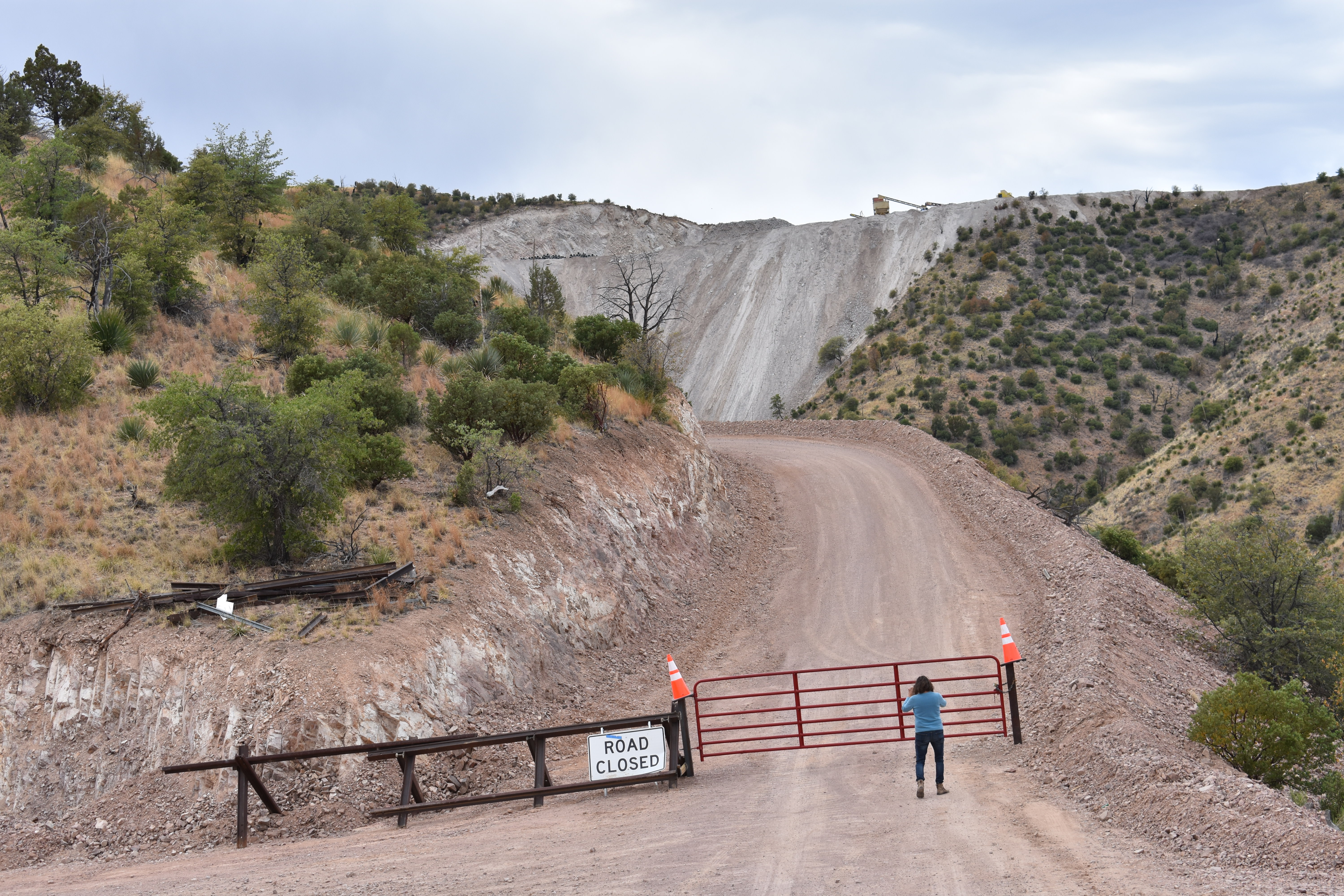 There’s arguably no more divisive infrastructure project in the U.S. right now than this border wall I’m standing in the shadow of.

I’m here with Kate Scott of the Madrean Archipelago wildlife center in Arizona’s Cochise County. We’re in the Pajarito Mountains west of Nogales where most of the work stopped on the border shortly after President Joe Biden took office. Border wall contractors left behind a mess in the middle of Coronado National Forest land.

"Road construction done in a way without regard for the land," Scott says as we stand on the edge of a steep cliff, observing the chaotic junk pile left in the wall construction's wake.

The dirt road leading up to the border was widened, the remnants of cliffs bulldozed over the side. 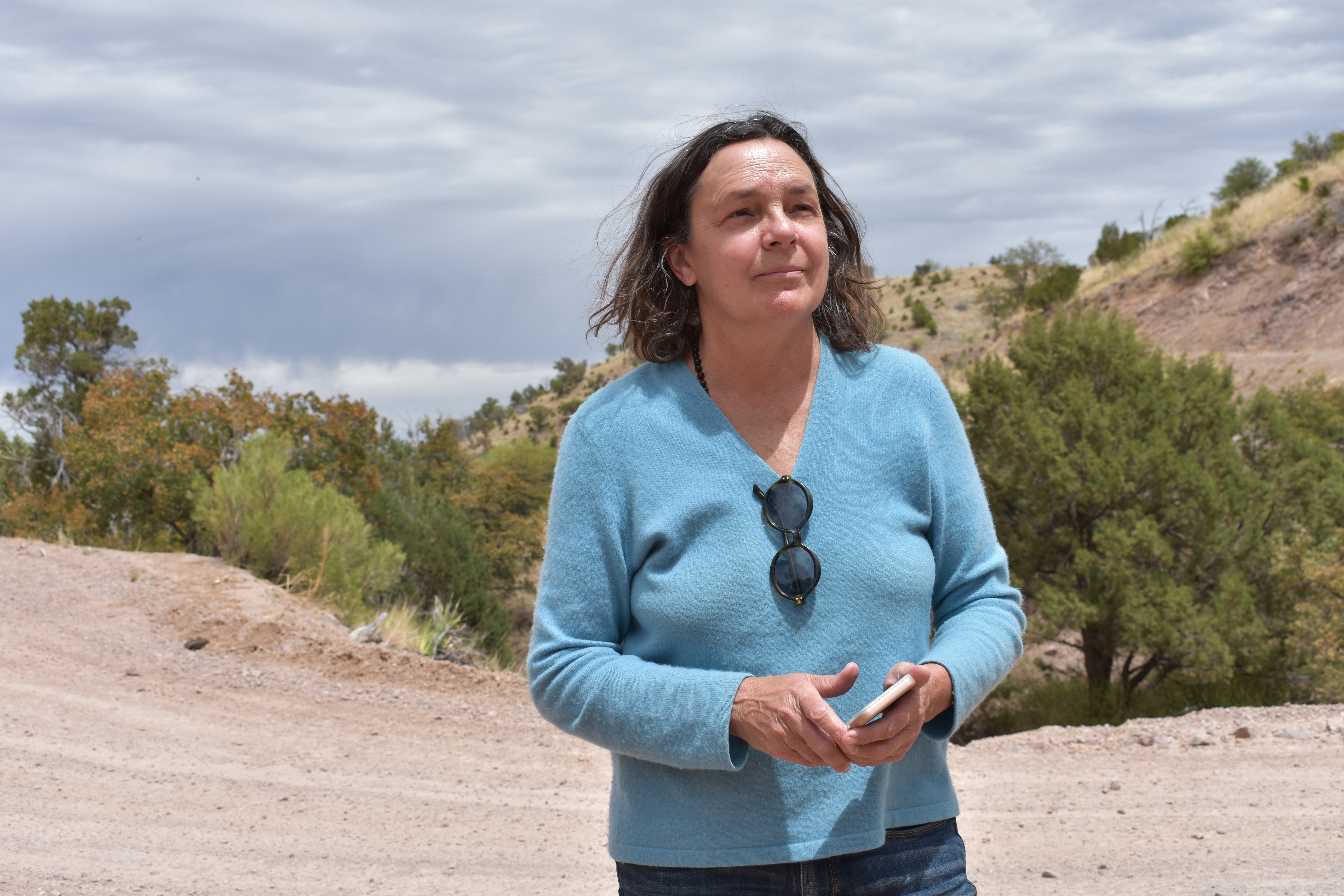 Pieces of old vehicle barrier were pushed into canyons. Other heavy, broken pieces were left on ledges and used to form a welded together gate blocking access to the remainder of the border road. Broken and flattened culvert pipe scattered across the grasslands.

"And everywhere that this was done, there has been created what I simply call mine tailings," Scott said.

Under former President Donald Trump, contractors built more than 20 miles of border wall in this area. The wall is just a part of the project; roads were widened, hills flattened and vegetation destroyed to reach the international border. Gaps in the fence remain. The border wall was being painted up until this year. Now, shiny black coating abuts lengths of rusting border wall.

"So you have this infrastructure leading up to the wall and all along the wall. And it's at the same level of devastation. This is a tiny little snapshot of one," Scott said.

Matthew Nelson is head of the Arizona Trail Association. The Trump administration slated the trail’s terminus at the border for a new wall last summer. Nelson says he's left with largely unknowns when it comes to the trail's head.

"Will the wall continue to be built? Will it be torn down and rehabilitated? Nobody knows," he said.

Army Corps of Engineers officials didn’t respond to questions from KJZZ about future plans, either.

"In fact we’re not even really sure who’s discussing this and how this project is going to move forward," Nelson said. 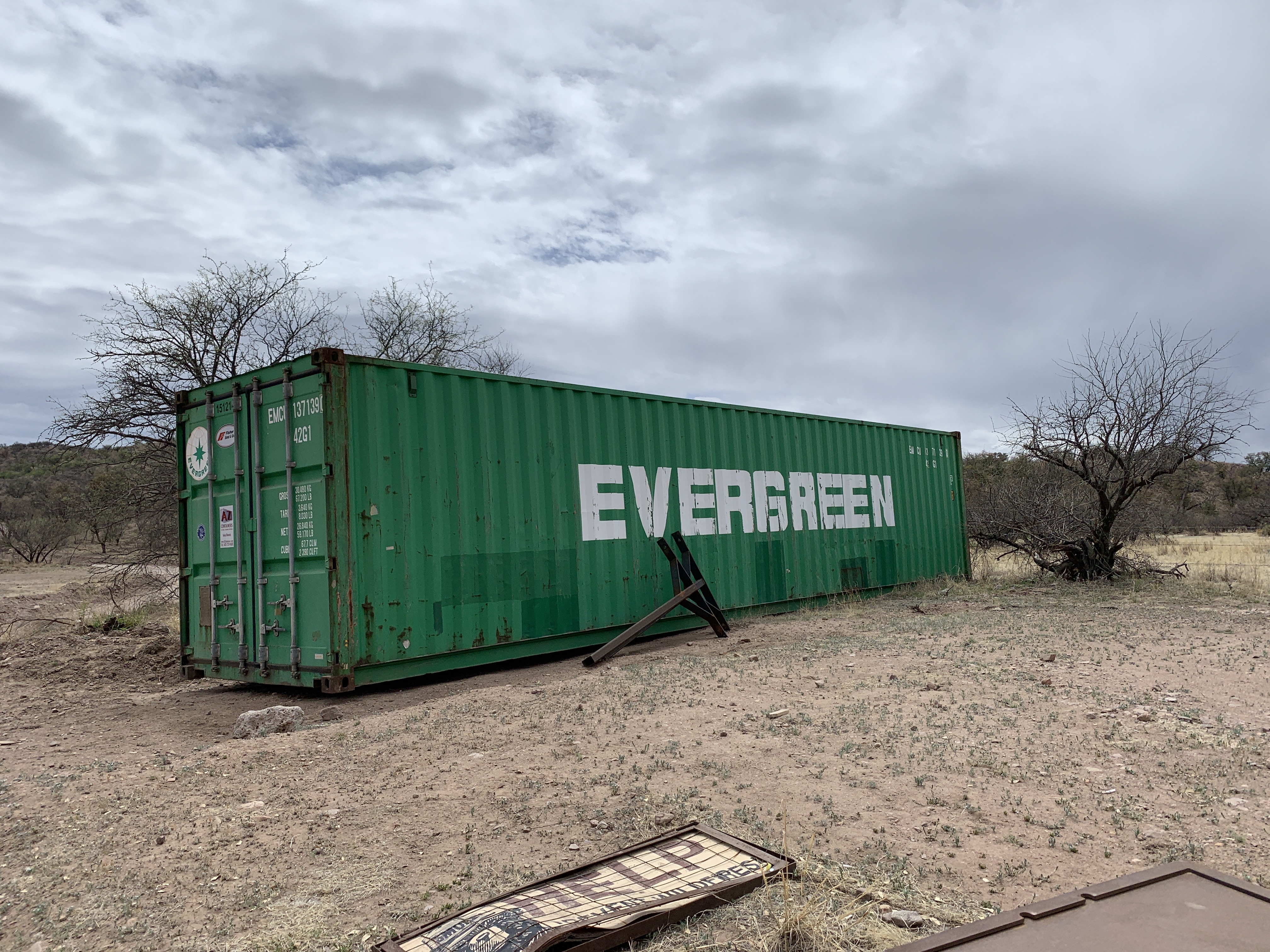 An Evergreen storage container has sat on national forest land at the entry to the border wall construction in the Pajarito Mountains of southern Arizona.Michel Marizco/KJZZ

How Mexico Will Provide Its Own Border Security

On March 1, President Biden told the Mexican president during an online meeting that Mexico is a crucial partner.

“We’re safer when we are together, whether it’s addressing the challenges of our shared border, or getting this pandemic under control,” said Biden.

Biden has said he will take urgent action to undo Trump’s immigration policies. He committed to ease entry for asylum seekers and refugees, tackle the root causes of illegal immigration and keep migrant families united.

Irineo Mújica is head of the immigrant rights non-profit Pueblos Sin Fronteras. Like other activists, he says Biden hasn’t brought any changes yet.

“He promised a lot of things, and he came out way too short,” Mújica said. Irineo Mújica, a migrant rights activist and head of the nonprofit Pueblos Sin Fronteras, at the Mexican Senate in Mexico City. Rodrigo Cervantes/KJZZ

Mújica said thousands of asylum-seekers are stranded in Mexico, while migrant kids are still being detained and separated from their families.

“I don’t see much difference, except that the cages are bigger,” the activist said.

U.S. and Mexican officials met in March to discuss immigration strategies, including a program currently led by Mexico to mitigate Central American migration by developing agriculture in that region.

Many analysts say the program is not working — and Mújica agrees.

“The root causes need to be addressed, and most of this money is going to go to the pockets of the politicians,” Mújica said.

The activist said his organization has noticed a growing presence of Mexico’s national guard on its borders. 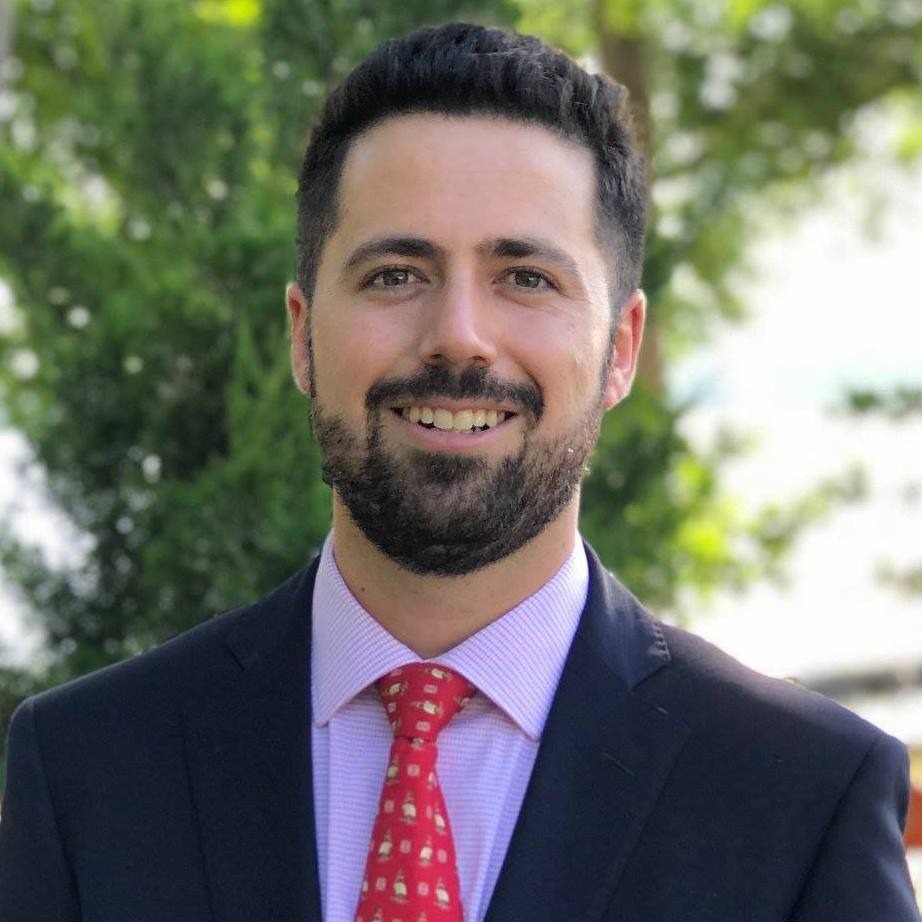 Mexico’s secretary of defense, Luis Cresencio Sandoval, said in mid-March that more than 8,700 members of the armed forces had been deployed to deal with immigration.

The Mexican government has stated that Central Americans migrate encouraged by their faith in Biden. And the U.S. Border Patrol has reported a significant increase of migrants.

“In October 2020, there were 45,000 apprehensions at the border and it has more than doubled since Biden won,” explained Antonio Michel, an international affairs expert and professor in Mexico City.

Biden recently announced that the U.S. would donate millions of coronavirus vaccines to Mexico, while Mexico continues strengthening its tactics to dissuade and handle migrants. Michel says it’s not a coincidence.

“It's what I call vaccine diplomacy,” said Michel.

The expert said the U.S. is sending vaccines to Mexico in exchange for political leverage. He says Biden needs allies as the migrant numbers keep growing.

“They might have predicted an increase, but not to this magnitude,” said Michel.

And the expert said it is unlikely that border enforcement will diminish under Biden, as his government lacks enough support from Congress, and from the people, to solve the issue. 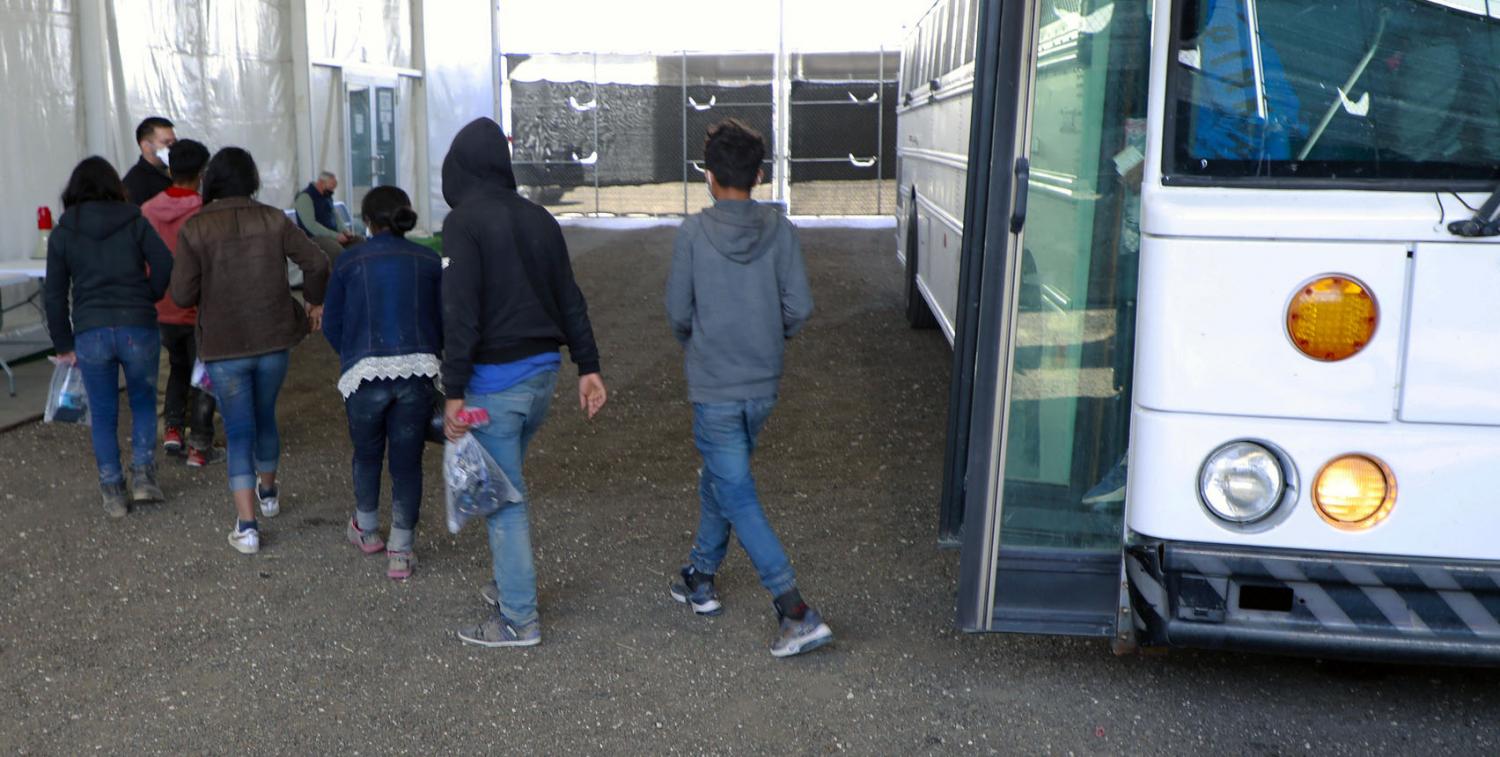 Unaccompanied children in the custody of the U.S. Border Patrol on March 17, 2021. Jaime Rodriguez Sr./U.S. Customs and Border Patrol