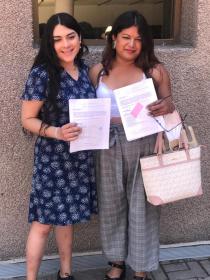 Roughly six months after the Sonoran Congress approved a law that allows transgender Sonorans to correct their official documents, the first applicants started the process this week.

Alejandra Domínguez, a member of Sonora Trans, which pushed for the reform, was one of the first two people to take advantage of the new law. She said that by Friday she could have official documents in her hand that accurately reflect her identity.

“(Monday) was a historic day for trans people,” she said of the day she formally started the process enabled by the law.

Having state-issued documents that affirm who she is will carry weight, she said, and could reduce the discrimination and transphobia she and other members of the community have long endured.