President Joe Biden ends the first 100 days of his presidency next week, a traditional honeymoon period when presidents lay out the first big agenda items of their term. KJZZ reporters bring you a series looking at how decisions will affect Arizona. 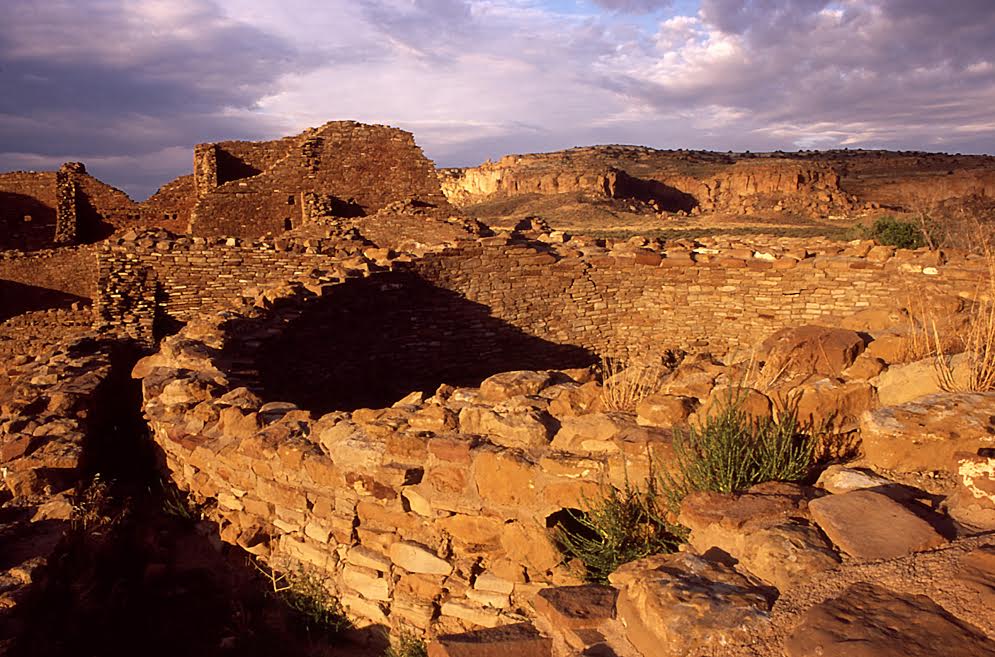 TThere’s not much left to drill.

About 90% of the Chaco Canyon region has been leased out for oil and gas drilling over the years, and people who live in this corner of northwest New Mexico have started to push back against the pollution.

Fighting oil and gas was challenging during the Trump administration, when the Bureau of Land Management offered up vast stretches of public lands to fossil fuel companies.

“The majority of that landscape’s already under lease. And communities there are already suffering from the pollution of oil and gas fracking," said Taylor McKinnon, of the non-profit Center for Biological Diversity. "And the BLM there has really been running roughshod over the community’s interest.”

He recalls driving in the Chaco Canyon area years ago, and stopping near a Navajo hogan a few miles from the smokestack of a coal-fired power plant.

“It was just this vivid image of a small hogan where people live, that had no electricity, no running water.”

Northwest New Mexico plays an important role keeping the Southwest power grid running, but some people who live there don’t have electricity.

One place that’s exempt from drilling is Chaco Culture National Historical Park, a collection of kivas and other structures that were built centuries ago. Archeologists aren’t sure exactly who built Chaco, but their descendants make up about 20 tribes who now live in New Mexico and Arizona. As they left the area, the Navajo took their place.

“Chaco park itself is protected from leasing and drilling,” McKinnon said. “The place where indigenous people once lived is protected, but where they now live, is not.”

The years of drilling have left their mark on the region, said Kyle Tisdel, of the Western Environmental Law Center.

“The best way to think about it is that it’s basically an industrialized landscape. And it’s like this massive factory that exists without a roof,” he said.

On paper, the area looks like a checkerboard of various landowners: state, private, BLM. 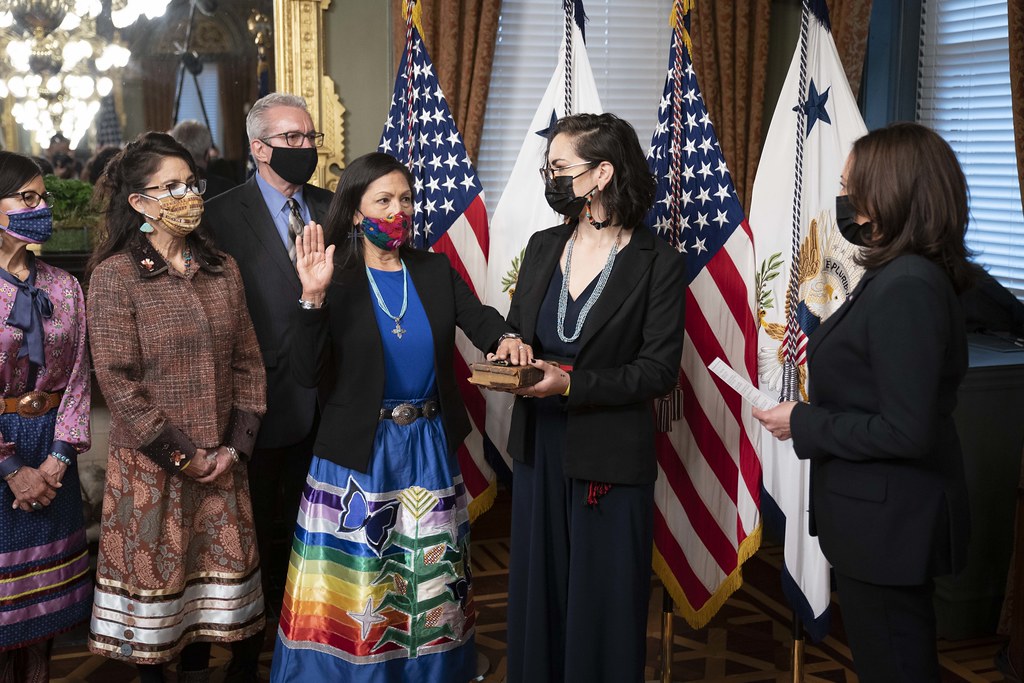 Vice President Kamala Harris swears in Deb Haaland as secretary of the Interior on March 18, 2021, at the White House.Lawrence Jackson/White House

Some of it belongs to Navajo people on the surface, but the BLM retains rights to most of what’s underground.

“So, you look at it overhead and it’s just this spiderweb of wells and well pads and roads and pipeline corridors and it is truly an industrialized landscape,” Tisdel said.

Oil and gas drilling are a major source of income for New Mexico. Biden’s Interior Secretary, Deb Haaland, is from New Mexico and a member of the Pueblo of Laguna. She told the Washington Post she understands that climate change may drive energy policy, but she cares about “every single” job the drilling industry provides.

Transitioning from fossil fuels to cleaner forms of energy overnight would have economic consequences.

“So, this is not a situation where, with the flip of a switch, you know the oil and gas development on public lands can come to an end,” Tisdel said. 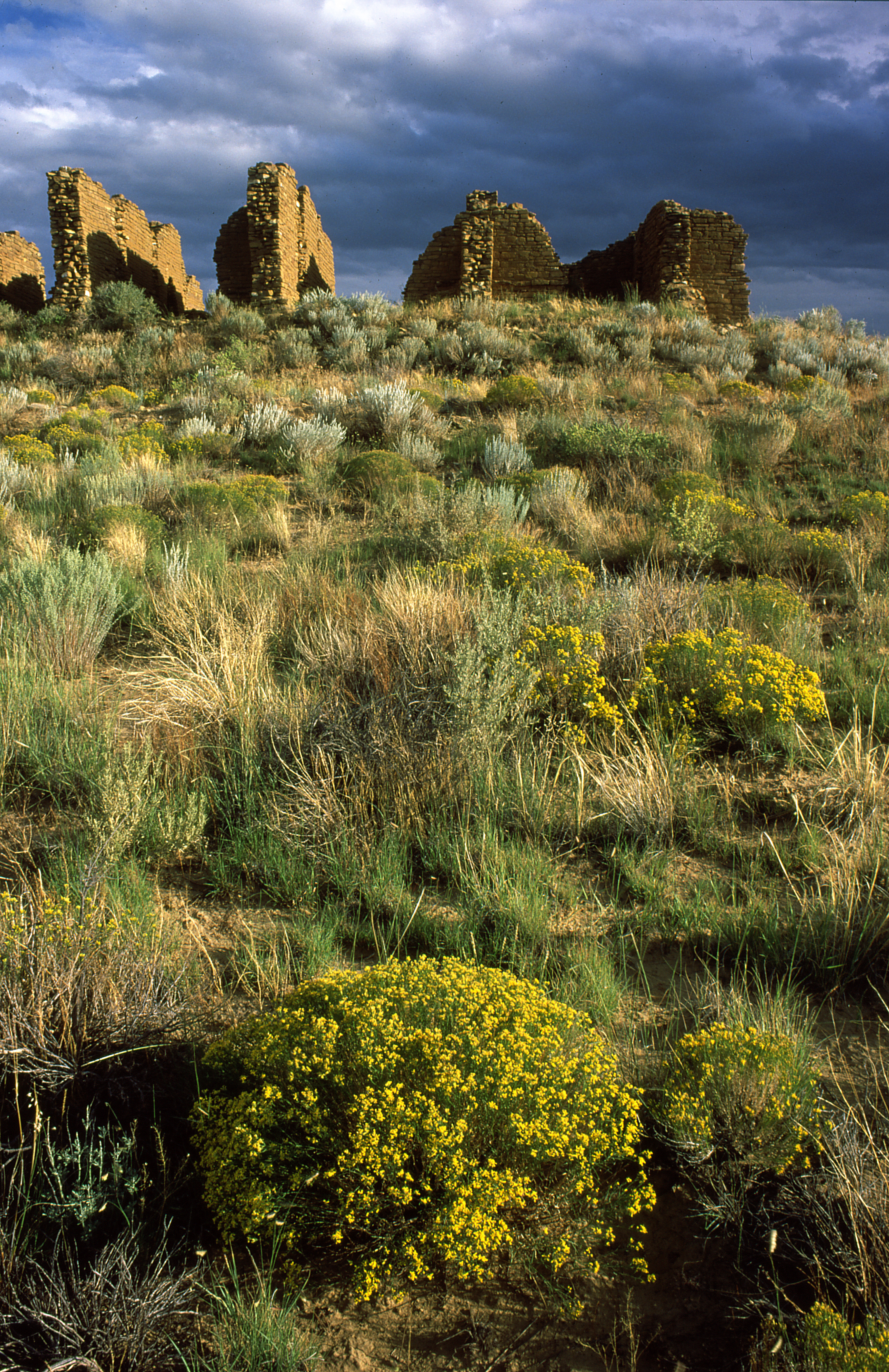 Conservationists say Biden’s moratorium on new leases won’t cause job losses because the companies stockpiled leases during the Trump administration. A fracking ban could make the oil and gas on those leases difficult to access, but that hasn't happened, and it's unclear if Biden will take action on fracking.

“You know the oil and gas program in general I think is broken,” Tisdel said. “My perspective is the timeline of the climate crisis demands that we end oil and gas and there’s an opportunity here I think to either manage that decline or have a really chaotic decline.”

A number of things are in play, and federal policy is only one of them, said Joseph Schremmer, an assistant professor of law at the University of New Mexico who once represented oil and gas companies.

“It’s certainly accurate that the transition from sort of a fossil-fuels based society to one that is reliant on carbon neutral or renewable energy does not have to be dramatic and abrupt.”

But whether that transition is smooth or chaotic is difficult to predict, because markets are volatile.

“I think that makes projections of job losses due to particular federal or even state policies a little tenuous because you don’t ever know what the price of oil and gas is going to do, and that’s generally the primary driver of how many oil and gas industry jobs there are at any given time,” Schremmer said.

So far, as Biden sets his environmental policy goals, it looks as if he’s getting ready for a marathon, not a sprint. The U.S. has rejoined the Paris climate accord and raised awareness of environmental justice. And just about everything the Trump administration did is under review, but it’s important to remember that a lot of factors, such as oil and gas prices, will be out of Biden’s control.