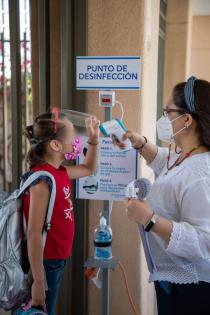 Sonoran Health Department
A student has their temperature taken at a private school in Hermosillo.

Two private schools in neighboring Sonora are the first to partially reopen.

As a part of an effort to slowly and safely reopen schools, state health personnel were on hand this week at two Hermosillo private schools to oversee the return of a maximum of 150 students up to the third grade. Several more private schools are slated to join the first group soon, according to a release.

The effectiveness of safety measures will be closely monitored, according to a statement from Sonoran Health Secretary Enrique Clausen.

“We won’t take any risks,” he said. “We’ll stop and do an evaluation of how the measures were applied. Then we’ll make decisions. What is a reality is that under no circumstances will Salud Sonora recommend the massive, simultaneous return (to classes).”

Public schools will not reopen until the relevant authorities authorize returns, and school staff are vaccinated, according to Clausen. Vaccinations of education employees are not slated to begin in Sonora until early May.