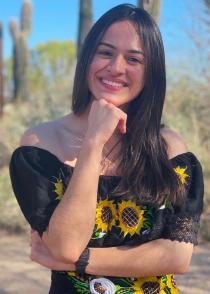 Deya Garcia
Deya Garcia is a student at Mesa Community College and a DACA recipient.

Arizona voters will have the chance to decide if Deferred Action for Childhood Arrivals (DACA) recipients should be eligible for in-state tuition.

On May 10, the Arizona House of Representatives voted to allow a ballot initiative in 2022 that would put the decision in the hands of voters to facilitate in-state college tuition for all graduates of Arizona high schools, including students who qualify as DACA recipients.

This won’t be the first time the issue will be on the ballot for voters to weigh. In 2006, Arizona voters passed Proposition 300, which barred those without legal immigration status from accessing public benefits, including in-state tuition. It was a bipartisan effort — with four Republicans joining Democrats to pass the measure.

Republican Reps. Michelle Udall and Joel John led the effort in the House to frame this decision as a ballot initiative. Udall couched the initiative as vital to the state’s economy:

“We need more college educated youth to become tomorrow’s teachers, healthcare workers, lawyers and engineers and a host of other occupations. Especially if we want to lower taxes," Udall said.

The resolution passed on a 33-27 vote — some lawmakers were opposed to the process in which it was passed. Others were highly critical of allowing DACA students to pay in-state tuition, including Apache Junction Republican Rep. John Fillmore.

“Americans should not have to pay for non-American citizens, illegals, giving them favorite status for their trespass and invasion into America," Fillmore said.

The resolution passed the Senate in March. It will proceed to the 2022 ballot and it does not require the governor’s signature.

The passage came as a welcome step to many "DREAMers" and DACA recipients around the state — many of whom will be directly affected if voters approve this measure.

Deya Garcia is one of those students.

Garcia is a sophomore at Mesa Community College and a DACA recipient.

The Show spoke with her for how she feels about the initiative's progress.