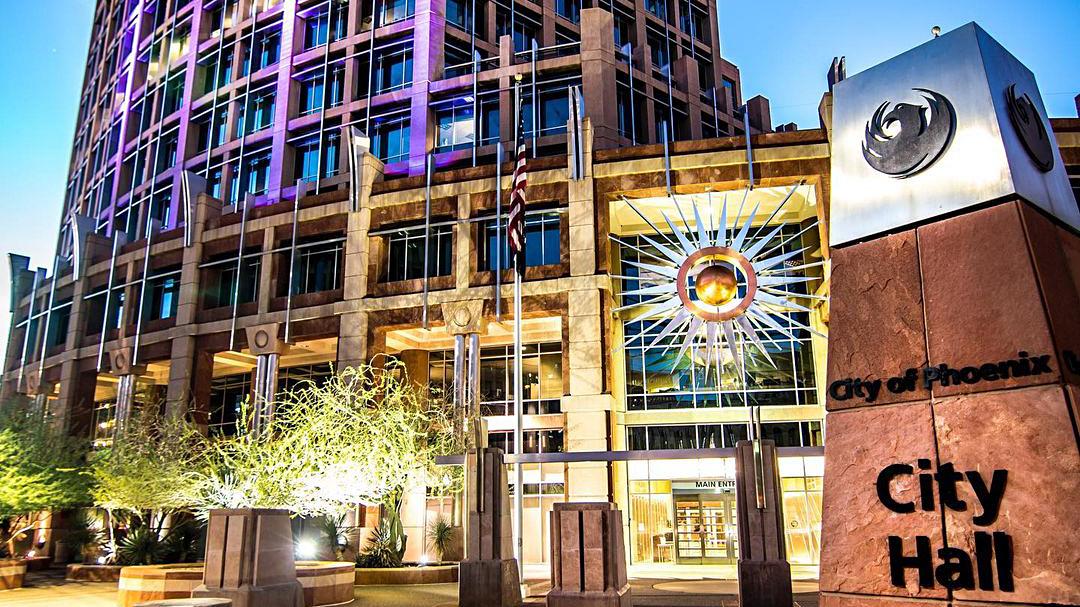 LAUREN GILGER: The Phoenix City Council is scheduled to take action on a new budget later this week. The largest chunk of the general fund — more than $786 million — is proposed for a department some say doesn’t deserve it. KJZZ’s Christina Estes joins me now to talk about calls to defund the police department. Good morning, Christina.

GILGER: OK so first off, describe for us what this phrase "defund the police" really means.

ESTES: Well, it can mean different things to different people. Most often it refers to reallocating money from policing to other city services. The goal in most cases is not to eliminate the police department. Instead, it’s to prioritize spending in non-policing forms like housing, education, youth programs and social services. The thinking is that you can make communities safer and healthier by investing more in services rather than law enforcement.

GILGER: Right. And individuals and groups that support cutting the police department’s budget have been speaking at city council meetings, they've been protesting outside city hall. They've also attended virtual public hearings on the proposed budget. Are they making progress?

ESTES: Not really, in their view. According to a city manager’s report, 199 people spoke in opposition of more funding for police during budget hearings. Twenty-six spoke in favor of more funding. "Defund the police" supporters feel like the budget hearing process was really just a show, a way for the city to say "Hey, we reached out to the community," and then chose not to cut the department’s budget.

GILGER: And their views are especially important, I understand, to Vice Mayor Carlos Garcia, right?

ESTES: Yes. He’s the most vocal police critic on the city council. During last week’s meeting, Garcia said the city’s $15 million plan to expand a civilian-led crisis response program will reduce mental health and behavioral calls to police. So if there are fewer calls, Garcia thinks some money could be shifted from police to other programs. He also mentioned a portion of taxes collected on recreational marijuana sales will be earmarked for police. Garcia asked Assistant City Manager Jeff Barton how marijuana sales would impact the city’s general fund.

JEFF BARTON: The actual estimates are all over the place, in terms of what we think that’s going to bring in. Our latest estimates were somewhere in the $22-25 million range.

ESTES: And Barton said the council will need to discuss marijuana revenues in the future.

GILGER: So when it comes to "defunding the police," Barton actually said the department has been largely defunded. What does he mean by that?

ESTES: He pointed out that Phoenix is down about 400 sworn positions and about 300 civilian positions compared to before the Great Recession. Barton said if you take away 75 new positions proposed in the new police budget, along with pension and compensation increases, the budget is less than what it was in 2007-08. On the flip side, critics say that’s a lot to remove to argue that today’s budget is smaller.

GILGER: Right, right. Garcia also asked about how the city negotiates with the Phoenix Law Enforcement Association, that's the union represents patrol officers. What does he want to see?

ESTES: The association, known as PLEA, is one of seven unions that negotiate contracts for city employees. All the groups meet behind closed doors with city management. Ed Zuercher, the city manager, said that’s the way it’s been done for 40 years, but if the council wanted to make negotiations public, it could happen. Garcia asked his colleagues to think about exploring a public venue for future negotiations.

GILGER: Hmm. So how did the other council members respond to that?

ESTES: Well, no one said anything — at least not publicly. It wouldn’t be surprising, though, to hear Garcia bring it up again, along with ideas to reduce the police department’s budget.

GILGER: Definitely not over. All right. That is KJZZ’s Christina Estes, who has been covering all this at City Hall. Christina, thank you so much as always.