For Ancestral Sonoran Spirit Bacanora, Conservation Is The Future 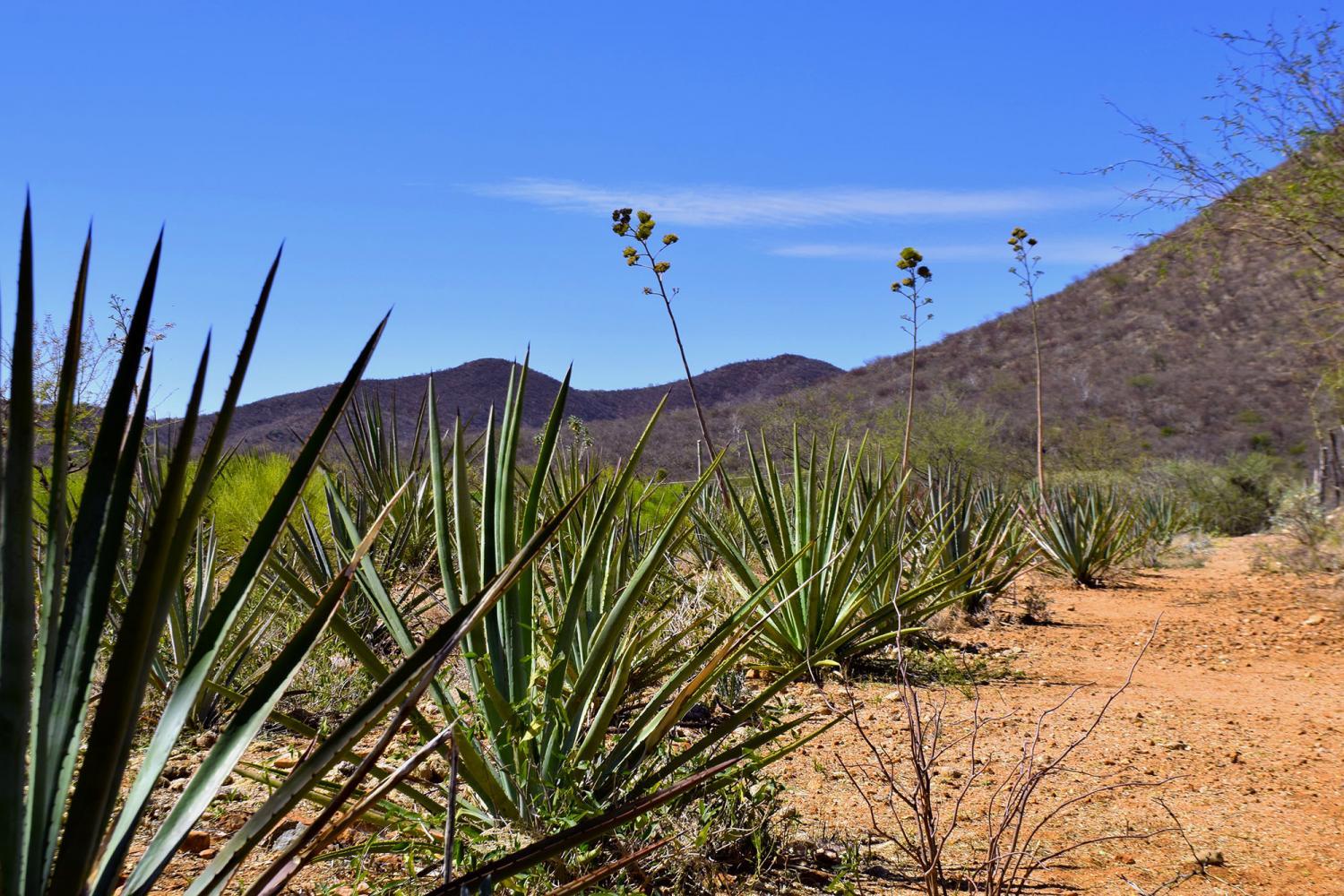 Kendal Blust/KJZZ
About 1% of agaves plants at the Siete Coronados Bacanora ranch in Matape, Sonora, are being allowed to flower for bats.

“There’s a ton,” Valeria Cañedo told Joan Coronado as she dumped dried bug bodies out of a white plastic bucket quietly clattering into a tin can.

The traps she set up on the Coronado family ranch to catch little agave-destroying pests known as "picudos," or agave snout weevils, seemed to be working.

Cañedo is a conservation biologist working with the Coronado family to make their production of the Sonoran agave spirit bacanora more sustainable as part of a new program called FOBADES — a Spanish acronym for the Fund for the Sustainable Development of Bacanora. It offers bacanora producers a special label on their bottles for implementing conservation practices. 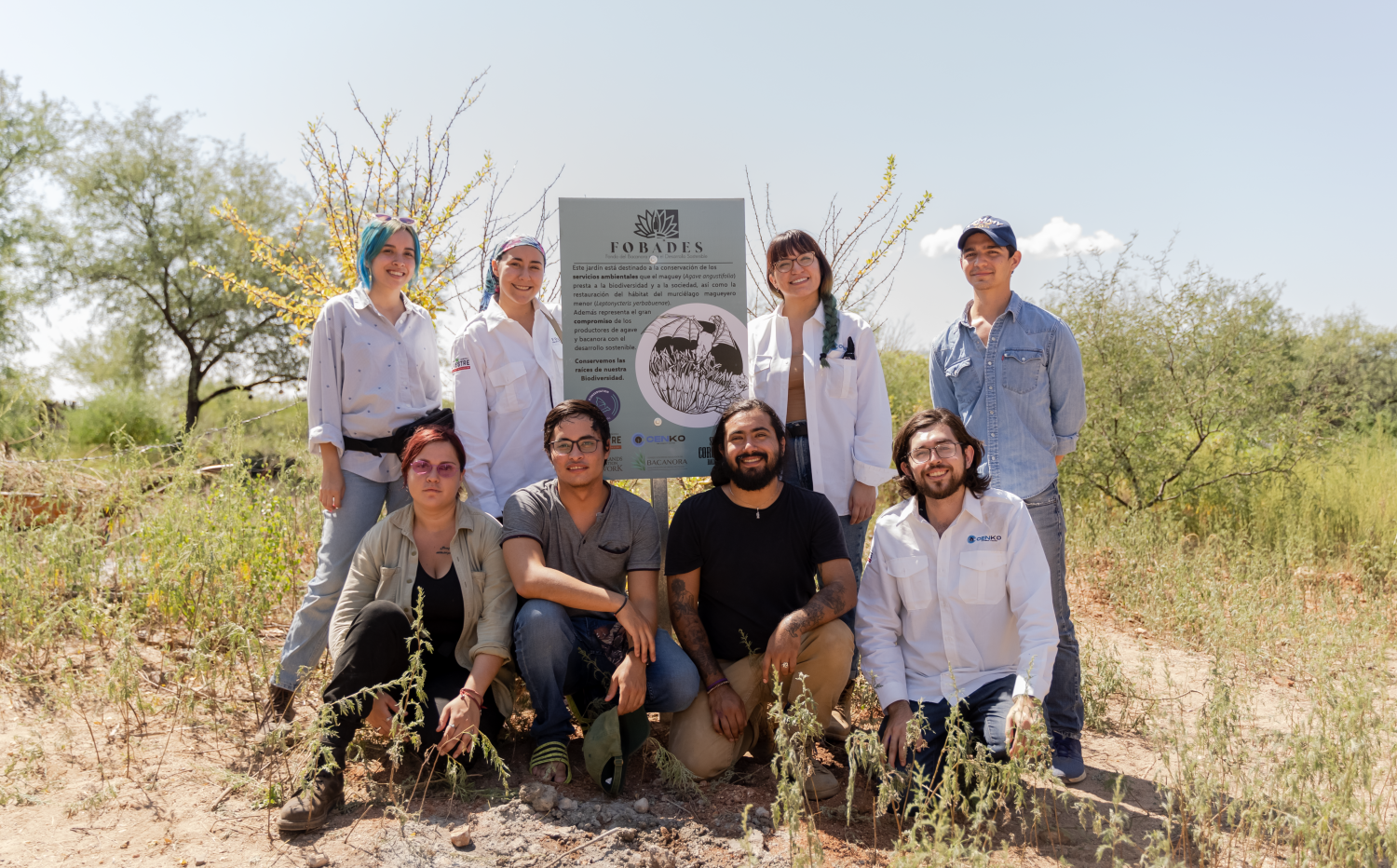 Colectivo Sonora Silvestre
Conservation biologists pilot FOBADES, or the Fund for the Sustainable Development of Bacanora, on a ranch in Matape, Sonora.

“Our main focus is to guide the Bacanora production to a sustainability path,” said Cañedo, who helped found the Hermosillo-based nonprofit Colectivo Sonora Silvestre, which is leading the new effort also known as Bacanora for Bats. “We’re not going to fix everything, but we’re going to help.”

Bacanora has a long, tumultuous history in Sonora, where it was banned for 77 years.

“But during those 77 years, my great-grandfather continued making Bacanora,” said Joan Coronado, who now helps his family produce their brand Siete Coronados Bacanora. “And my uncles too, they continued that tradition that was, you could say, being forgotten because of the penalties for those who were caught. You could be killed for making bacanora in those years.”

Despite the risk, for decades his family members trekked into the surrounding mountains to harvest wild agave and brew the spirit in makeshift stills hidden among mesquite trees.

“Obviously, we started out using wild agave from the mountains,” he said. “And from there we started looking to the future and started transplanting some of the plants.”

Bacanora was finally legalized in 1992. And a few years ago, Coronado's family started planting agave fields on their small ranch in the little town of Mátape, where long rows of the the spiny green succulents are now growing. Here and there, a huge flowering agave stalk towered above the desert landscape.

“Right now we only have about three, four hectares. But with a lot of love,” Coronado said with a laugh.

With less than 10 acres planted so far, the family’s fields are much smaller than those of some producers in the state. But their move away from using wild plants is important, because the inability to plant fields during prohibition led to overharvesting. Along with climate change and habitat loss, that wiped out much of the state’s supply.

“There were a lot of problems based on those 77 years of prohibition,” Cañedo said. “There was no food for pollinators, there was no plant for propagation and reforestation, there was no responsibility at all with the production. So what we’re trying to do is save the plants, save the pollinator and improve the rural economy.” 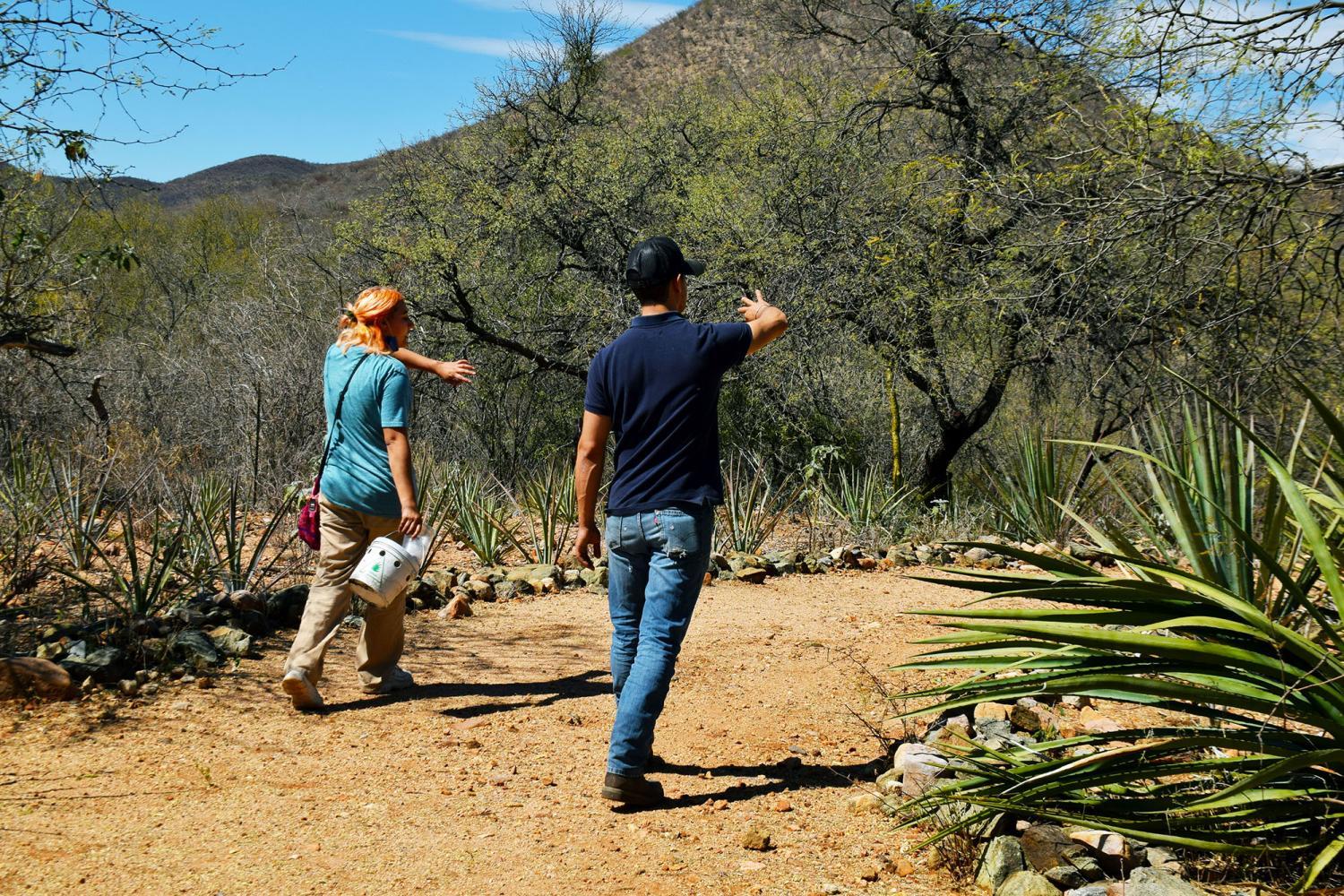 Kendal Blust/KJZZ
Valeria Cañedo and Joan Coronado talk as they walk through the agave fields in Matape, Sonora.

Already working on agave reforestation, Cañedo’s conservation collective realized that teaming up with bacanora producers would be a win-win: both securing raw material to make the spirit and providing fuel for pollinators like the lesser long-nosed bat.

“It’s a migratory species that depends on the agave plants to survive and complete its migration route,” she said. “And the ones that migrate are the females, pregnant females.”

The little bats fly hundreds of miles each year from central Mexico to maternity caves in the Arizona-Sonora borderlands, where they feed on agave flowers, and pollinate the plants.

But because agaves flower only once in their lifetime, there’s also tension between bats and bacanora, which requires agaves to be harvested before shooting up their flowering stalks in order to preserve the plant's sugars for distillation. 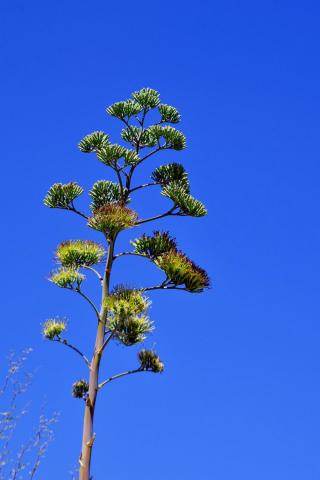 Kendal Blust/KJZZ
An agave flowers in the Coronado family fields in Matape, Sonora.

“So what we’re doing is leaving these plants to bloom for that female bat and her babies, and also for the genetic diversity of the plants,” she said.

Bacanora producers in the FOBADES program have to leave about 1% of their agave fields to flower for bats, along with other conservation measures, like limiting pesticides and growing plants from seeds instead of pups, or clones, that limit genetic diversity.

In return, they receive training, wildlife monitoring on their land and help controlling pests like the agave snout weevils.

"And also, you’ll have a really, really beautiful landscape you can create. Here in the morning you can see the hummingbirds and the bees, and at night the bats. Just letting one plant bloom can change everything in your field," Cañedo said.

But perhaps the most concrete benefit is a certification for brands that complete FOBADES requirement that will stamp their bottles with a sustainability label. That could increase their value by as much as 15%, according to a recent survey conducted by CENKO, a network of nonprofits including Colectivo Sonora Silvestre.

The label will be administered through the Sonoran Bacanora Regulatory Council, a government agency which has officially backed the project, giving it added legitimacy.

“There’s been a lot of work that hasn’t been super successful for regulating tequila partly because the industry doesn’t want to change,” said Francesca Claverie with Arizona-based Borderlands Restoration Network, which has helped secure funding for Bacanora for Bats. “But with bacanora, you really have the opportunity to get this stuff off the ground early,”

The regulatory council has even suggested making sustainable production part of bacanora’s denomination of origin which regulates how and where bacanora can be made, she said, adding that Arizonans should be paying attention to how this industry develops. For one thing, bacanora is increasingly being imported to the United States upping demand for the spirit. But also because collaboration is necessary to protect plants and pollinators that exist on both sides of the border, she said.

“We’re really special in Arizona to even have nectar-feeding bats like the lesser long-nosed bat that come up here,” she said. “If we don’t have connectivity across the border, and if the United States isn’t supporting the migration pattern of these nectar feeding bats while we’re buying bacanora and other products, we’re just doing ourselves a huge disservice. We have an opportunity to help out and support projects that can only take place in Mexico, like bacanora in Sonora.” 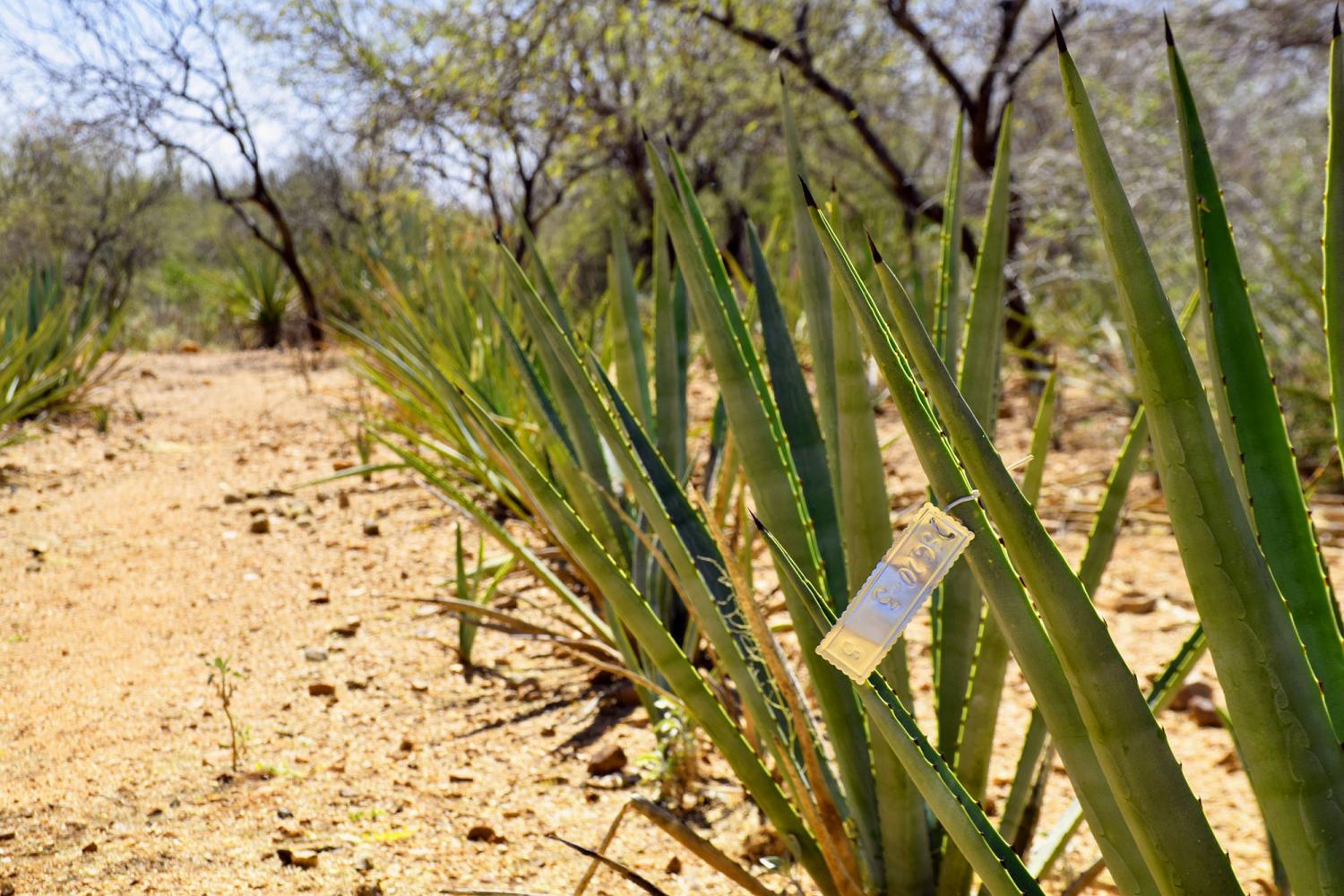 Kendal Blust/KJZZ
Agaves that will be allowed to flower are tagged as part of FOBADES.

“In Sonora there is a sense of pride in our bacanora. We feel it’s something we can show off to the world,” said Fernando Aguayo, head of the Sonoran Bacanora Regulatory Council. 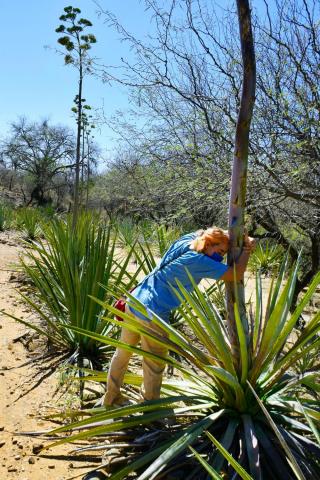 But to do that, he said, it has to be produced responsibly — something he thinks most producers understand.

“It’s easy to reach them. It’s easy to make them understand. Because there is an underlying truth: if you use up all the plants, your business is finished,” he said. “Without agave, there is no bacanora.”

The industry’s future depends on protecting both plants and the bats that pollinate them. So helping producers to become sustainable is an integral part of preserving an important Sonoran legacy, said Cañedo.

“We’re not trying to change the way this has been made. We’re trying to support it, and we’re trying to make their future better,” she said. “I’m only 25, I’m really young, and it makes me cry when I see bacanora producers passing this tradition on to the next generation. It’s really beautiful. For Sonora, this is our culture, this is in our blood.”

And yes, leaving agave to flower does mean losing out on some bacanora. But Joan Coronado said as far as his family is concerned, the benefits more than offset the costs.

“The other night I was sitting on the porch, and you could see a ton of bats out there, and it’s like, wow, then this is really working already,” he said. “It gives you a sense of pride, and it makes you want to keep going.”

Watching those bats swirl around the yellow-flowered stalks, he said, it was clear that his family is on the right path. 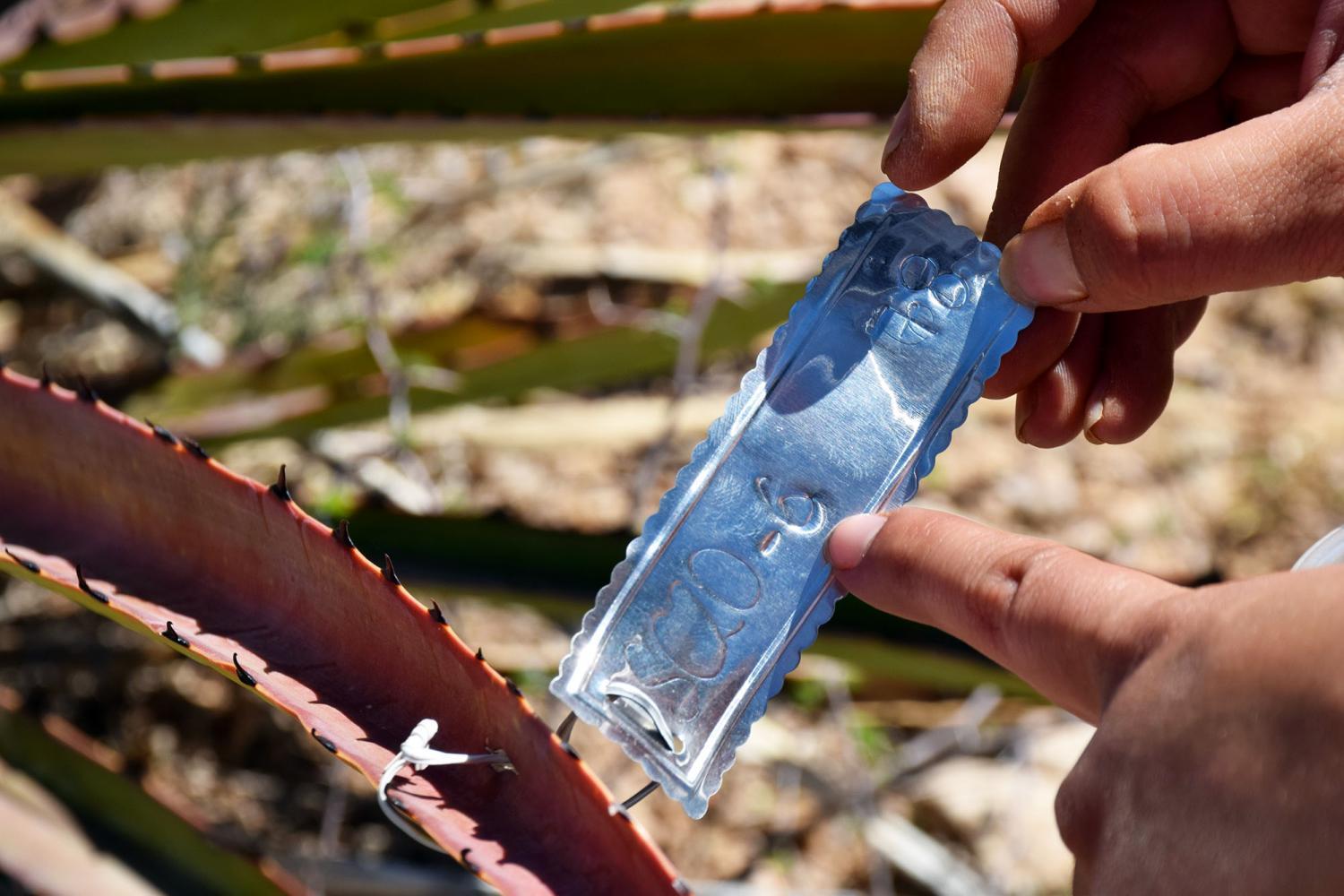 Kendal Blust/KJZZ
Agaves that will be allowed to flower are tagged as part of FOBADES. 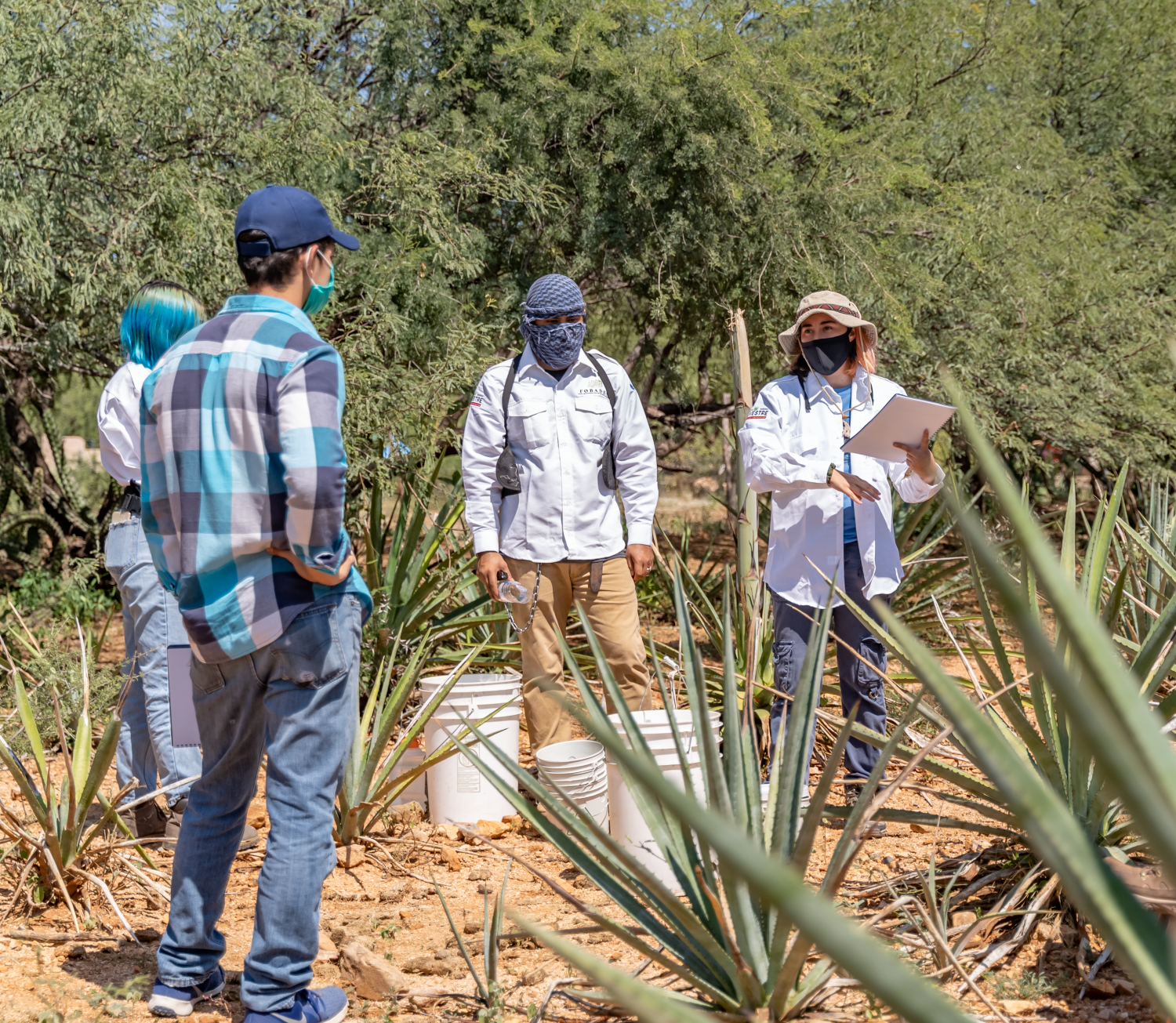 Colectivo Sonora Silvestre
Members of the nonprofit network Cenko in Sonora set up sustainable practices at for Siete Coronados Bacanora in Matape, Sonora. 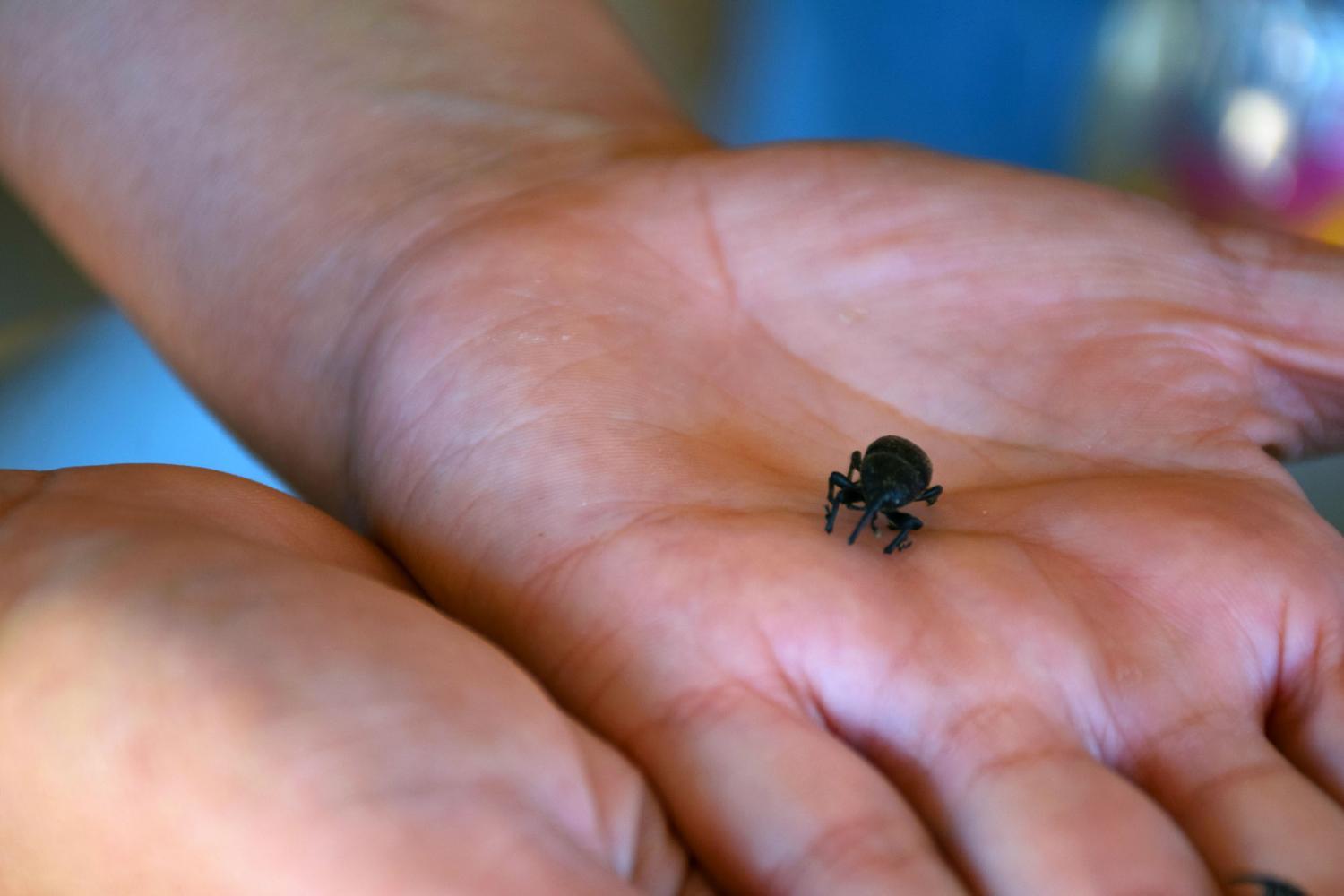 Kendal Blust/KJZZ
Valeria Cañedo holds up a picudo, or agave snout weevil, that was caught in a trap. 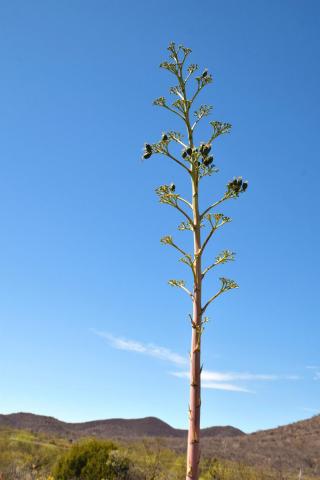 Kendal Blust/KJZZ
An agave stalk in the Coronado family's fields in Matape, Sonora 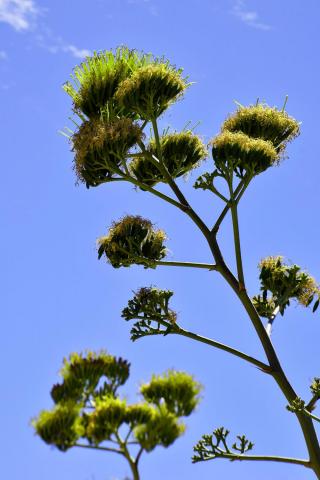 Kendal Blust/KJZZ
An agave flowers in the Coronado family fields in Matape, Sonora. 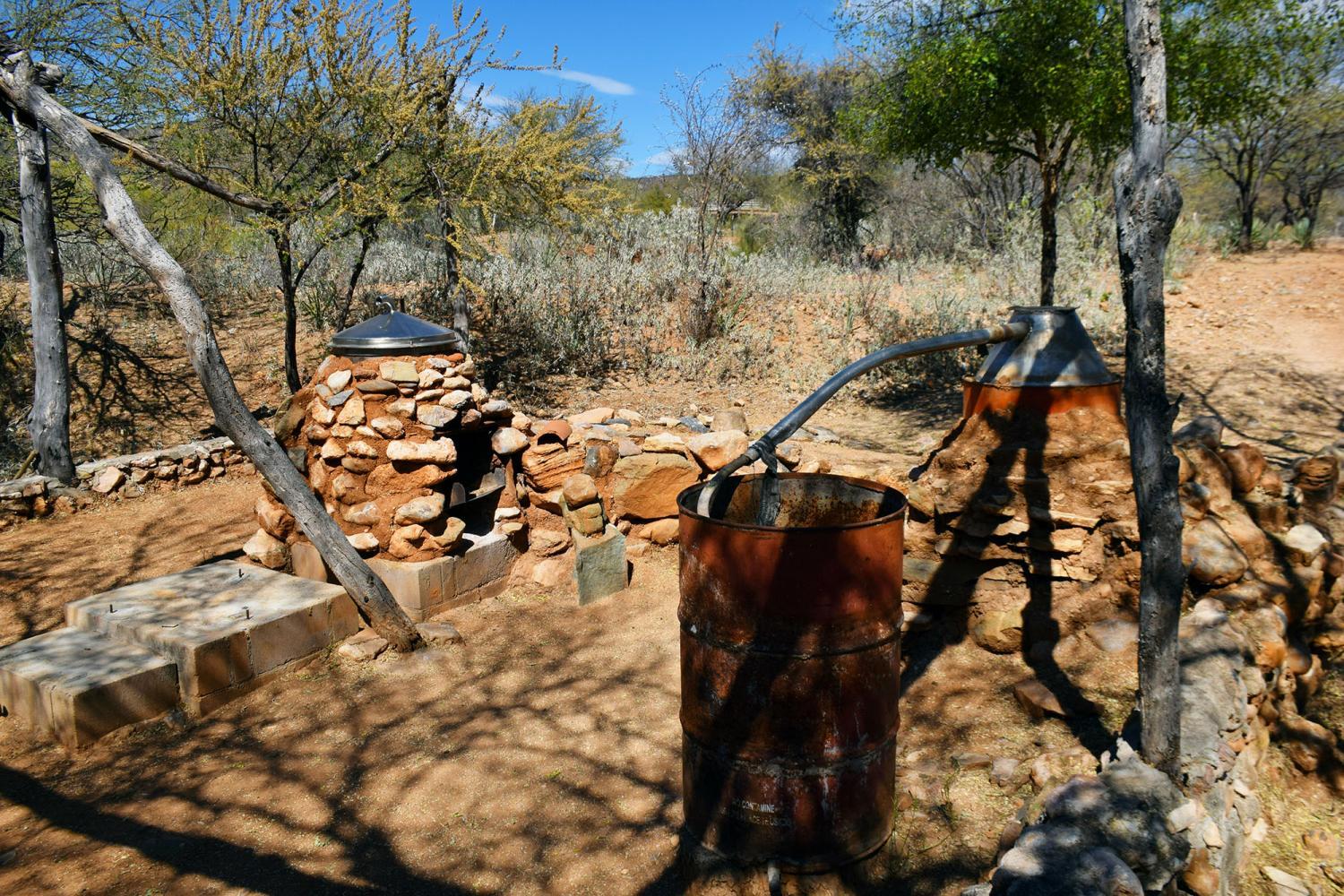 Kendal Blust/KJZZ
The bacanora still the Coronado family used in the mountains was moved to their property after bacanora was made legal in 1992. 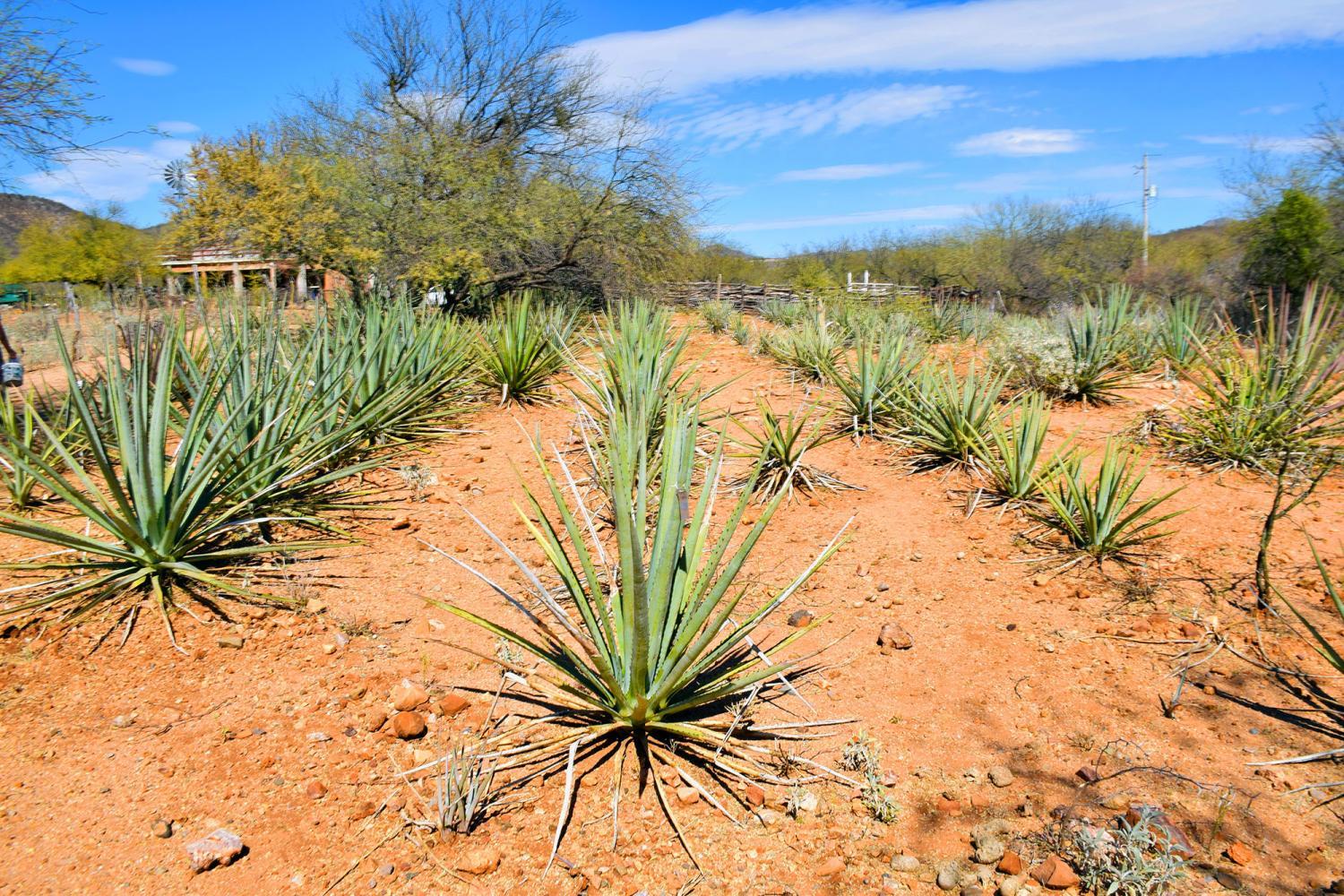 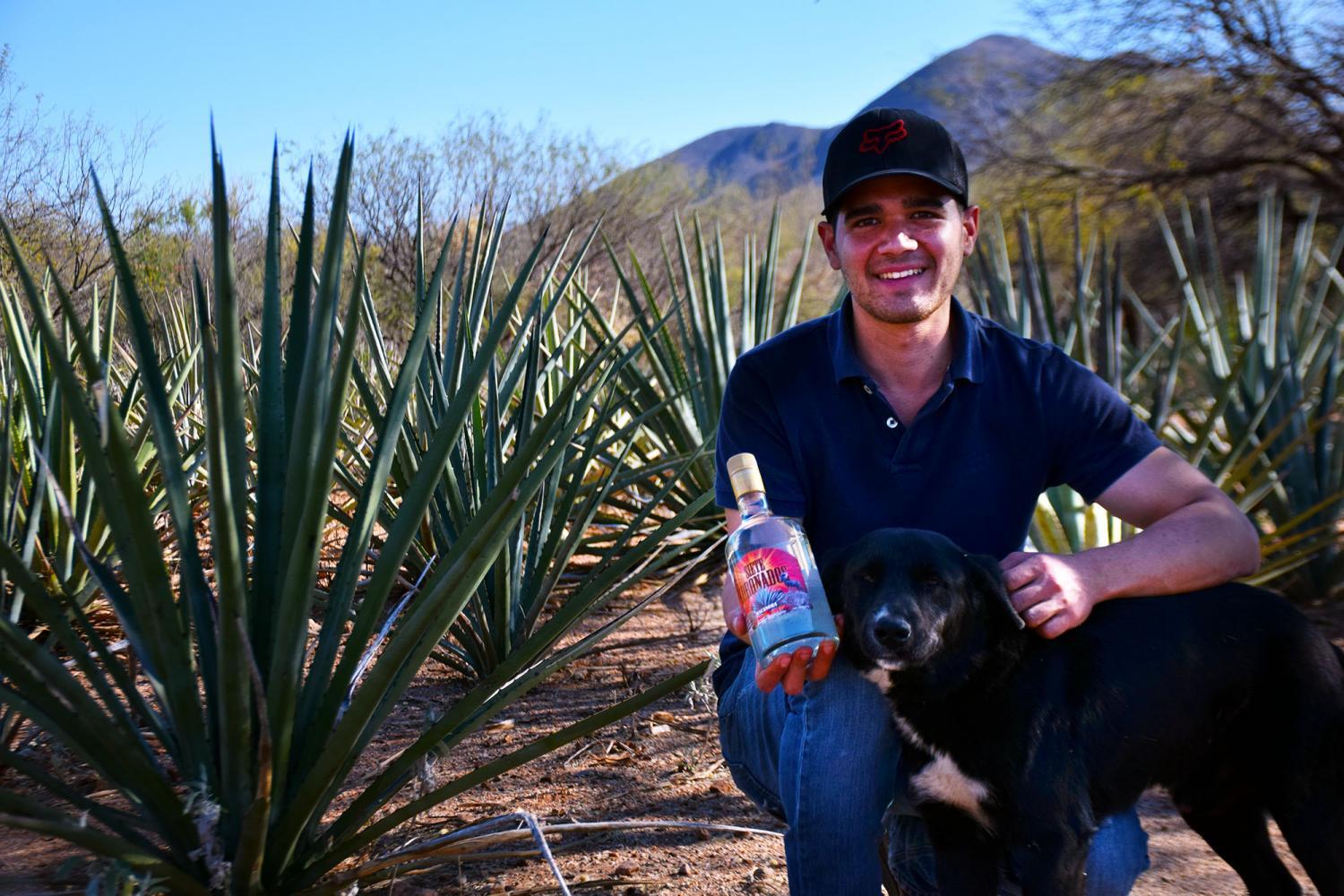 Kendal Blust/KJZZ
Joan Coronado holds up a bottle of his family's bacanora in their fields in Matape, Sonora. 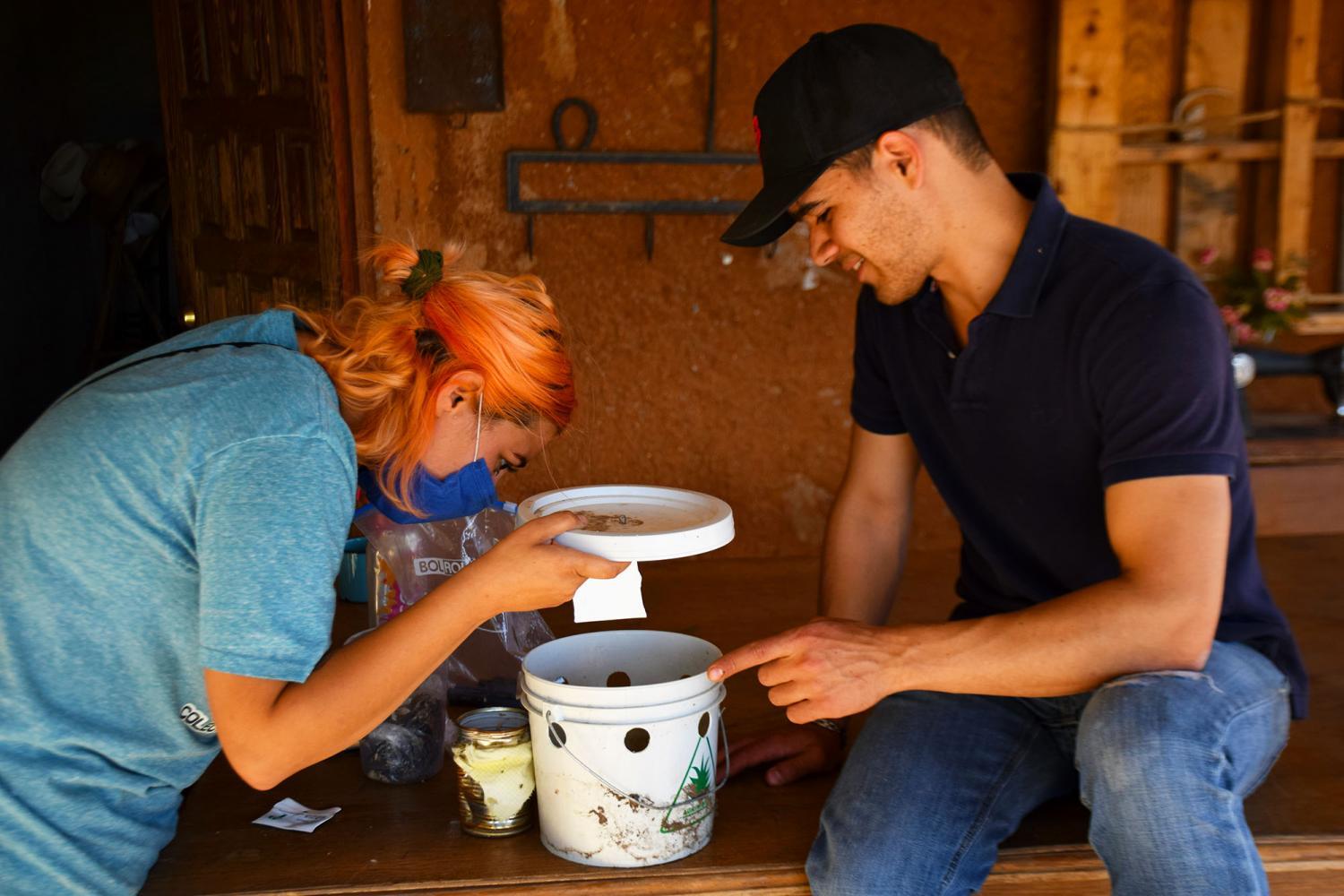 Kendal Blust/KJZZ
Valeria Cañedo and Joan Coronado look at the picudos that were trapped as part of the FOBADES program.
Fronteras Science Sonora Sustainability