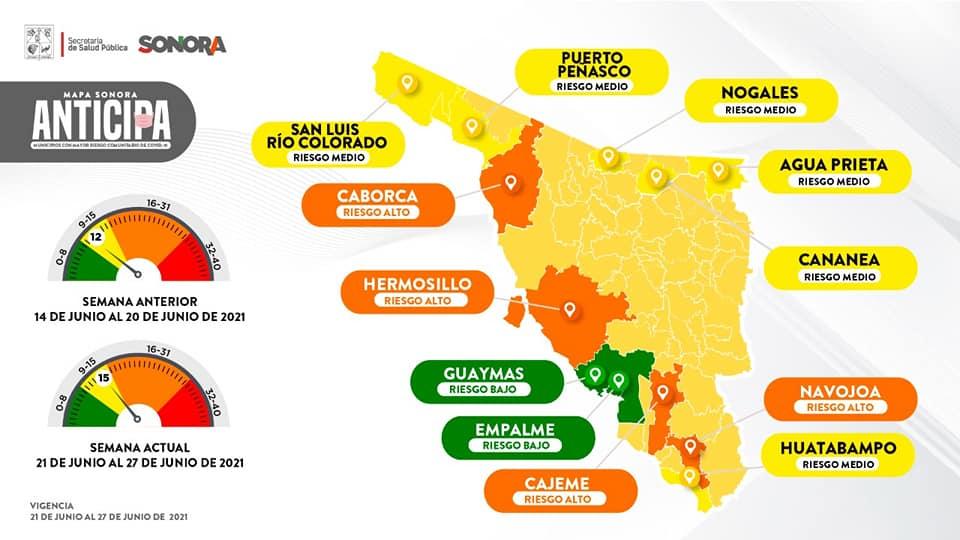 Salud Sonora
As of June 19, 2021, four Sonoran municipalities are considered at high risk according to the state's coronavirus risk level map.

Coronavirus cases have been steadily increasing in neighboring Sonora, Mexico, for more than a month now. Nationwide, numbers also are beginning to tick up.

Bars, restaurants, movie theaters, casinos and other businesses will be allowed to stay open with safety protocols and new limits on capacity and hours. Large gatherings like concerts and festivals are being suspended.

"If you don't want to be part of the contagion, don't take you face mask off for any reason, ventilate your house, don't go to crowded places and maintain at least a meter and half of distance. And I repeat: don't take off you mask for any reason," he said Tuesday night after the new restrictions were implemented.

Federal officials are putting out a similar message after cases increased nationwide for the second consecutive week.

Deputy Health Minister Hugo Lopez-Gatell said Tuesday that it’s too soon to say there is a third wave in Mexico, but officials will be monitoring regional outbreaks.

Among states with the biggest increases in cases are popular tourist destinations like Quintana Roo, Yucatan and Baja California Sur.

A serious outbreak in the country could hamper efforts to end travel restrictions at the U.S.-Mexico border, in place now for nearly 16 months. U.S. officials have said public health data will guide decision making about the restrictions.

For more on the new restrictions, The Show spoke with KJZZ's Kendal Blust, who is based in Hermosillo, Sonora.