Hermosillo Pedestrians Face Many Dangers, But Work To Address Them Is Underway 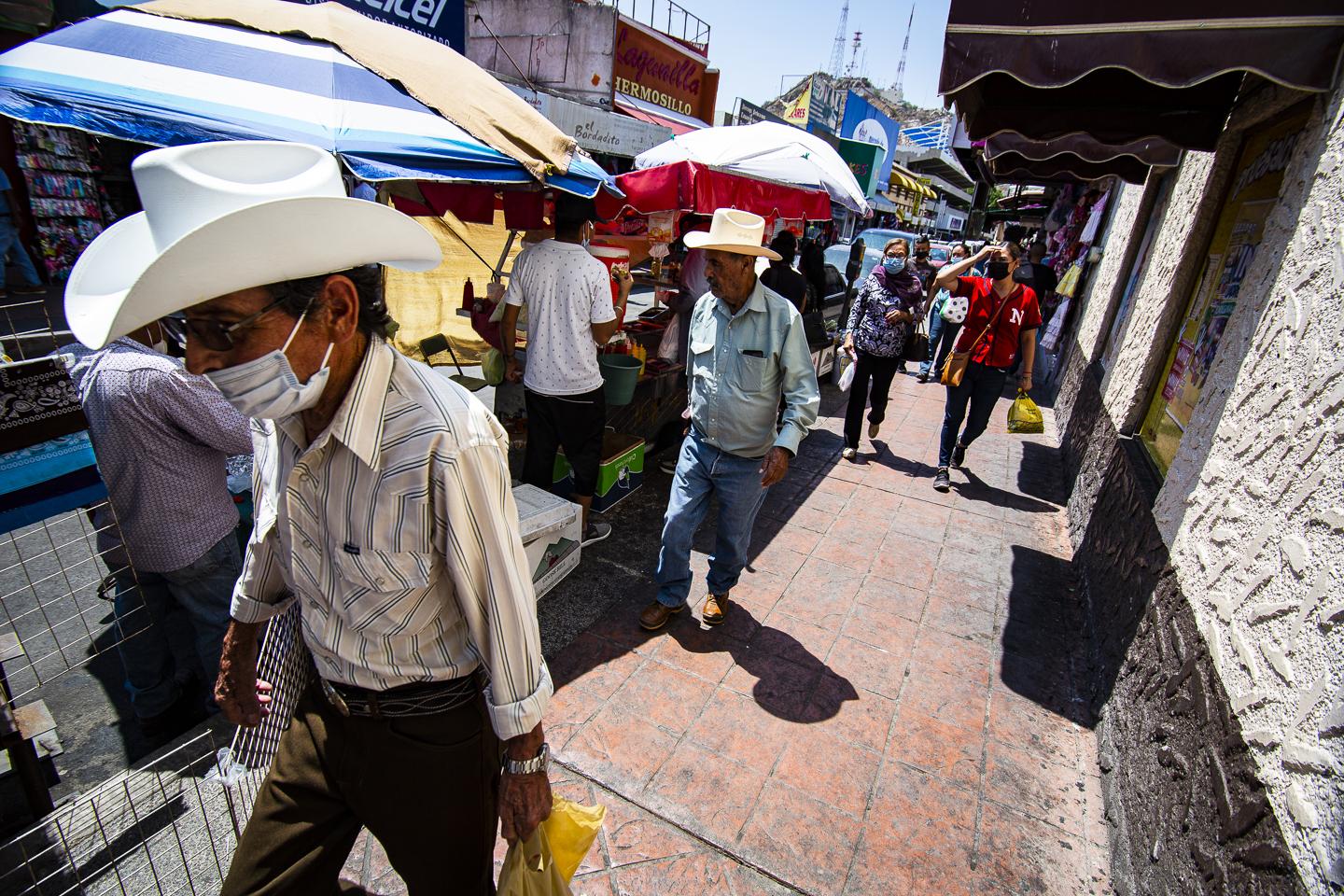 Murphy Woodhouse/KJZZ
Most people get to downtown shops by foot, but despite that many say pedestrians have not been adequately prioritized.

Protected from the bustling traffic all around him by a wall of orange plastic barriers, Hermosillo graphic artist Andres Castro was crouched and painting a crosswalk with vivid blues and yellows on a recent weekday morning.

“We’re trying to represent elements or activities that are done in our state,” Castro said. “For example, this is the Sea of Cortez crossing, and the sea’s fauna are represented.”

When it’s done, whales, manta rays and other denizens of the famously biodiverse sea will add color to the intersection.

The six additional crosswalks that are part of the project in the Cinco de Mayo neighborhood will have other regional themes, like Sonoran cuisine and indigenous traditions.

The project was pitched by three now graduated local university students — Omar Garza, Luisa Verdugo and Marianna Longoria of the Tec de Monterrey’s Hermosillo campus — and is supported by a program at New York University and local planning officials. 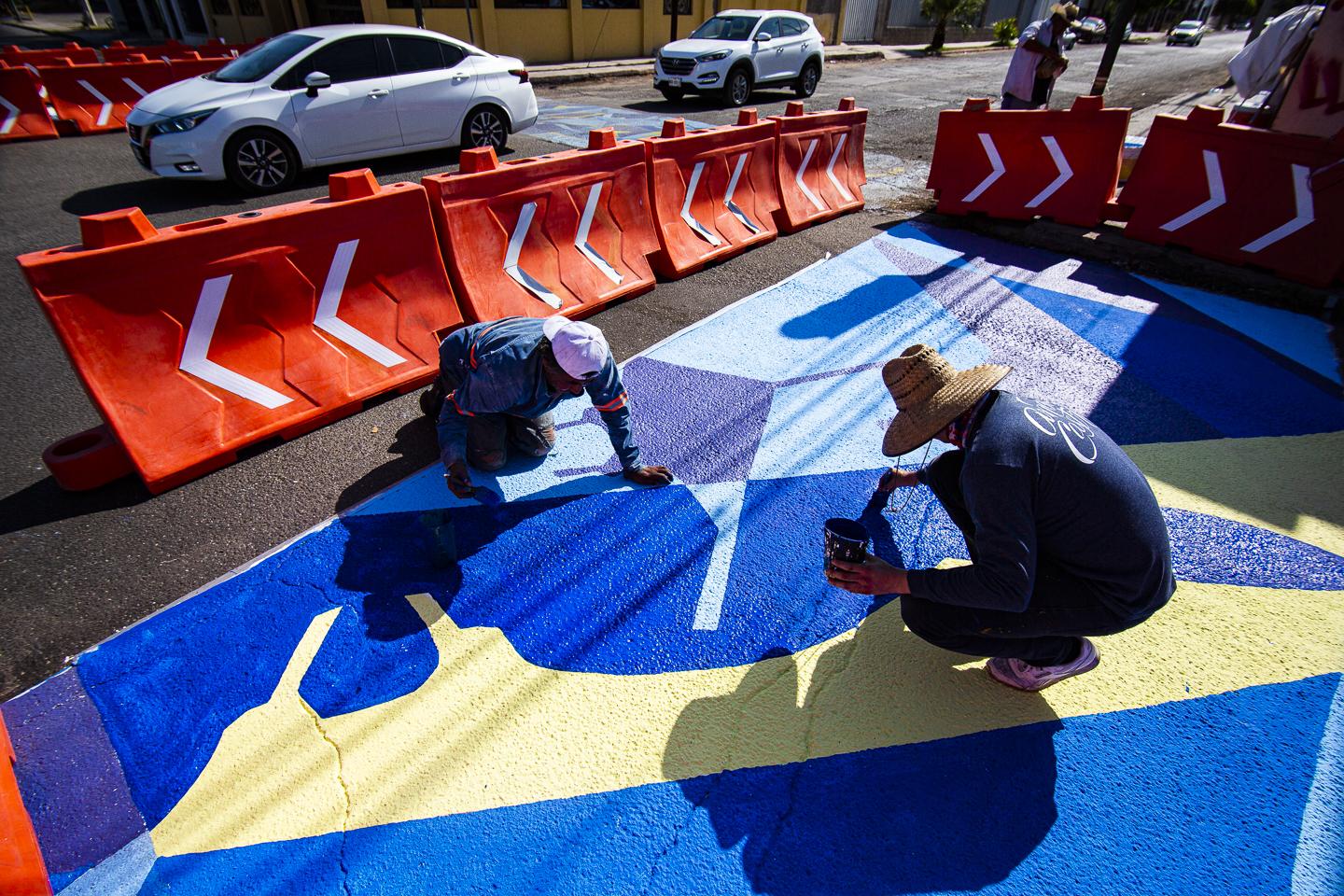 Murphy Woodhouse/KJZZ
Hermosillo graphic designer Andrés Castro, right, came up with the design for a crosswalk in the Cinco de Mayo neighborhood.

Beyond adding some color to the neighborhood, the goal of the crosswalks is to increase visibility of the city’s imperiled pedestrians.

“You’ve got to be careful,” he said of walking in the city, whose motorists are notorious for driving quickly, and without enough caution of their own. “You’ve got to look both ways.”

While Castro was painting, Cinco de Mayo resident Rosa Fernández and a friend walked by on their daily, two-and-a-half-mile stroll.

“We walk every morning at 6:30,” she said, well after that time that particular morning. “We just slept in.”

She said she hopes the new crosswalks help, because she says she and the other regular neighborhood walkers don’t always feel safe, especially at intersections.

And her anxiety is backed up by federal crash data. Between 2017 and 2019, the most recent year available, more than 60 pedestrians were killed in Hermosillo, and more than 700 were injured.

Compared to other large Mexican cities, Hermosillo is among the most dangerous for pedestrians — and all road users, according to a KJZZ analysis of that data.

More recent city data obtained by KJZZ through a public records request shows that 18 more pedestrians were killed in 2020, and another five through April of this year. 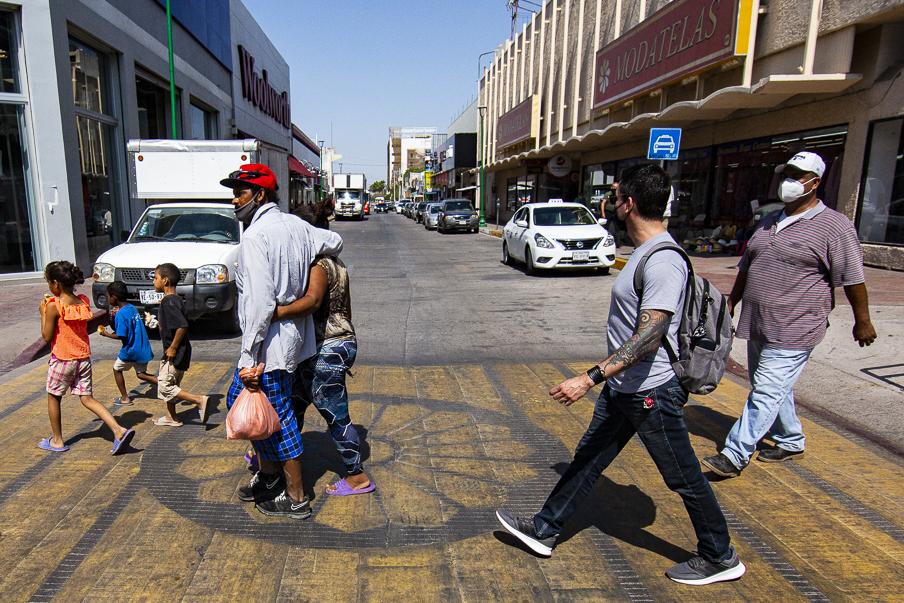 Pedestrians Not A Priority

“Look, basically it’s not good,” said Lupita Peñuñuri, director of the municipal urban planning body IMPLAN, when asked to describe the situation faced by pedestrians in the city.

For years, cars have been prioritized by planners, to the detriment of pedestrian infrastructure, she says: the result is crumbling or non-existent sidewalks with inadequate accommodations for those with disabilities; wide, high-speed thoroughfares with few safe places to cross and traffic lights that don’t give enough time for those on foot.

Newer rules now require better pedestrian features for new construction, but reversing the legacy of older policies and priorities will be a long process, according to Peñuñuri.

She described the level of pedestrian death and injury as a longstanding “crisis”, but one that many have accustomed themselves to, or rationalized as progress’ price. But she said there’s nothing inevitable about it.

To challenge that mindset and try to make the city’s streets safer for vulnerable users, in 2019 Hermosillo adopted what’s known as a Vision Zero policy, one of few Mexican cities to do so, the goal of which is to eventually reduce roadway deaths to zero.

Part of that is simply studying where pedestrians and cyclists are getting hit, so that officials know where to make changes. But it also involves adding bike lanes, and projects like the painted crosswalks, according to Peñuñuri. 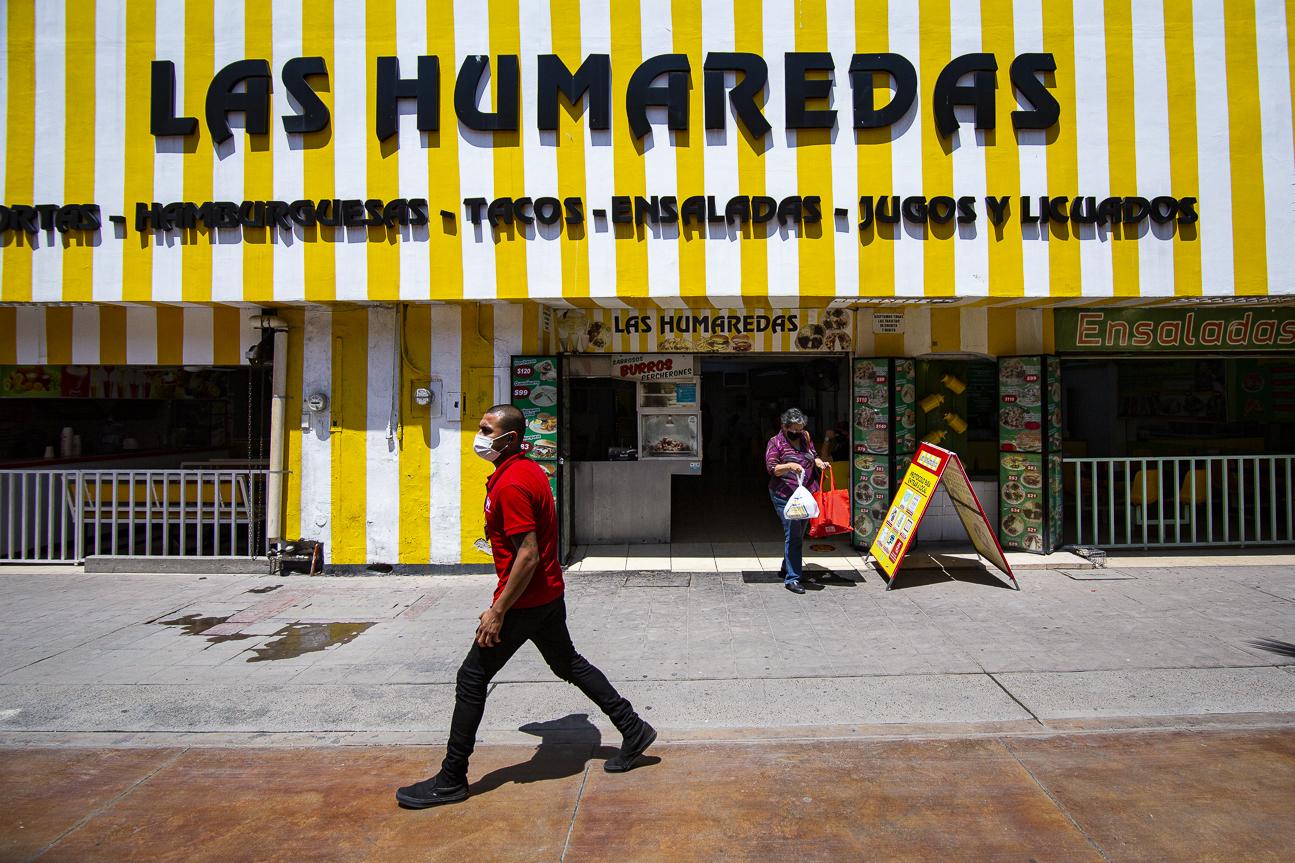 Another major area of concern, and also some recent improvements, is Hermosillo’s bustling center.

“It’s the place where the most people walk,” said Daniel Franco Garza, an urban planning doctoral student at the University of Illinois in Chicago who has studied downtown Hermosillo, and ways to make it more pedestrian friendly. “But at the same time it’s the most problematic.”

He said those on foot face thick traffic, high-strung drivers and inadequate sidewalks, among many other issues.

“If the mobility of pedestrians is limited, then pedestrian access to the city’s assets is limited,” he said, adding that many Hermosillenses don’t own their own vehicles, and depend on public transportation, bikes or their own two feet to get around.

And despite being the vast majority of customers at the center’s many businesses, pedestrians haven’t been prioritized.

But there are signs of change. Last fall, a block-long stretch of road was converted to a pedestrians-only walkway. Franco thinks much more is needed, but that it represents a step in the right direction.

And some Centro businesses back that vision.

The short, converted street bears the name of Miguel Angel Figueroa, a longtime Centro business owner who supported the project.

In the office above his store La Familiar, he said that many of his clients are lower income, and get to the center by bus, and then walk everywhere they need to go. He sees a clear link between improving the pedestrian situation, and improving downtown business.

“Imagine that what you’re seeing here, that it continues (three more blocks north),” he said of the new cars-free plaza just around the corner. “Two streets like that, and two horizontal.”

As he sees it, pedestrians winning means the Centro also wins.