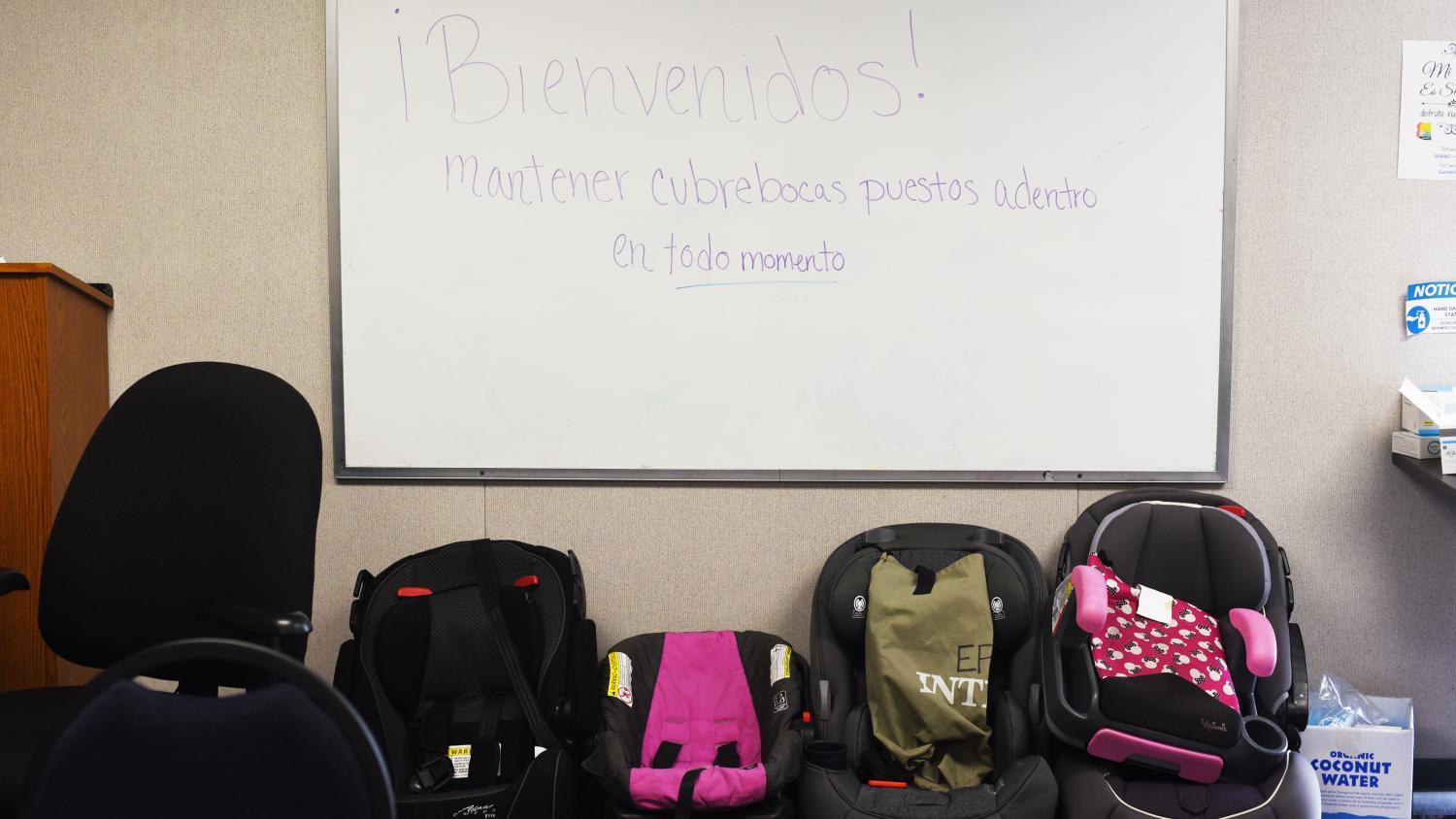 Alisa Reznick/KJZZ
A collection of car seats leans against the wall at the rural health clinic where aid workers are processing asylum seekers in Nogales, Arizona. The seats are used on the bus ride to Tucson for families with small children.

Part two of a two-part report looking at asylum amid the pandemic-era border protocol, Title 42.

All told, the DeConcini Port of Entry in Nogales is about 600 meters long. On a slow day, it might take a U.S. citizen half an hour to cross. But for migrants part of the Title 42 exemption program, the process will last hours. And they wait weeks to finally make the trip.

During processing by Homeland Security personnel, across the border in Arizona, humanitarian workers like Anna Vasquez also wait. 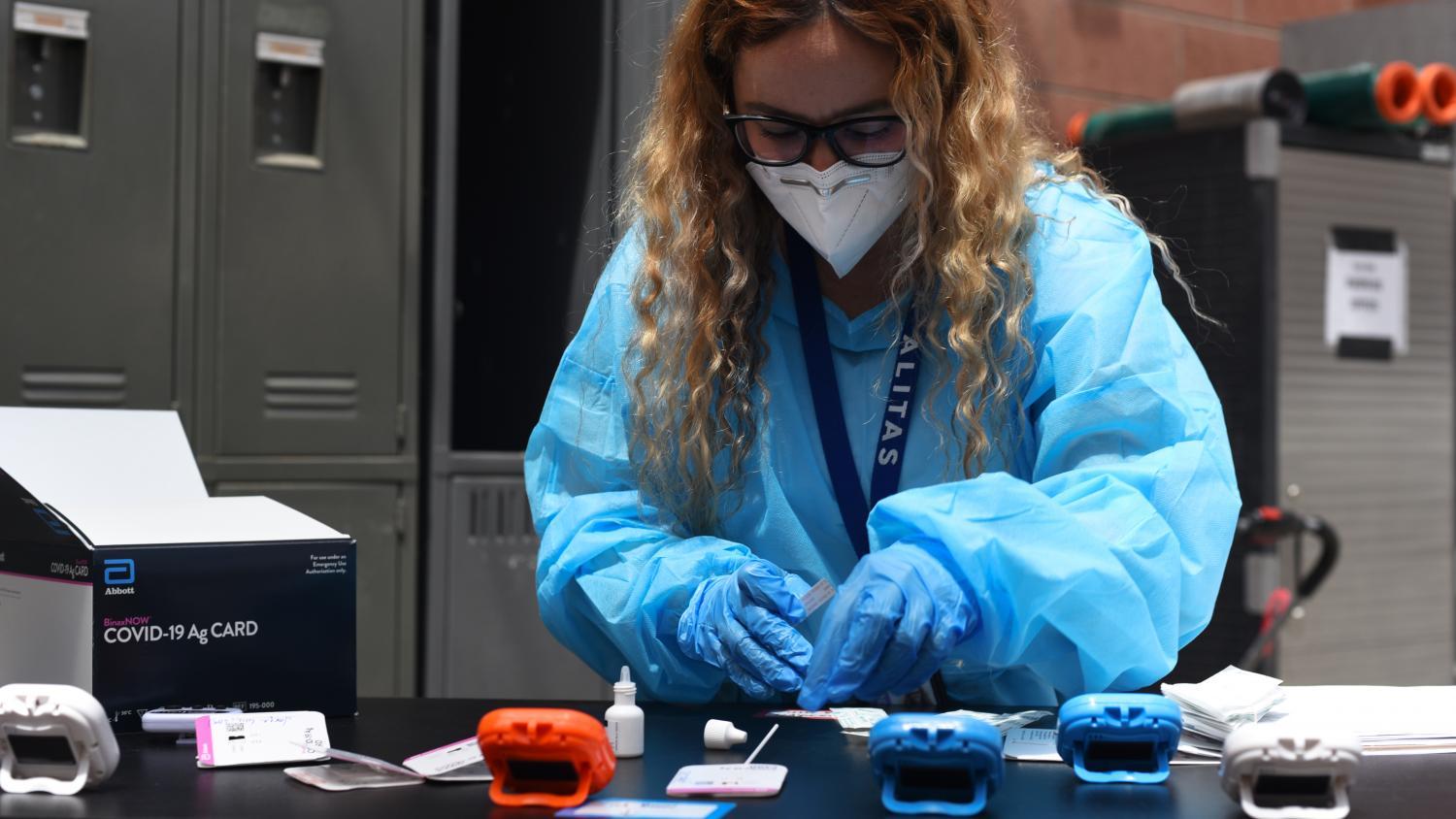 Alisa Reznick/AZPM
Casa Alitas staff member Anna Vasquez prepares rapid COVID tests for migrants dropped off at the center by the Border Patrol. Some migrants, like those arriving in Tucson, through the humanitarian consortium are tested in Mexico, but others are not.

Vasquez works out of a rural health clinic in Nogales. It’s a bare-bones operation; on the day I visited, a few other aid workers sat at small tables on their laptops, and a collection of snack-sized chip bags were in a basket at the front. Above a row of infant car seats, a whiteboard read, “Bienvenidos.”

Each day, a few hundred people are able to bypass Title 42 at ports along the southwest border because they’re considered the most desperate. Vasquez was expecting about a dozen in Nogales that afternoon.

“We have to get the information, and we offer them, like, something to drink and a little snack,” she said. “And the bus is waiting for them so they can take them to the shelter in Tucson.”

That shelter is the Casa Alitas Welcome Center, operated by Catholic Community Services of Southern Arizona. All the migrants Vasquez was waiting for had already been tested for COVID in Mexico.

When she got word they’d finished processing, we met them at the port. A group of families walked across a pedestrian bridge dividing the two countries, and a representative from the International Rescue Committee met them at the bottom of the stairs.

“Welcome, here is Anna from Casa Alitas,” he said, gesturing to Vasques. “She’s the one who’s going to be organizing transportation.”

The International Rescue Committee is one of a handful of binational aid groups taking part in the Department of Homeland Security’s humanitarian exemption process. The representative told them a bus would take them to Tucson. 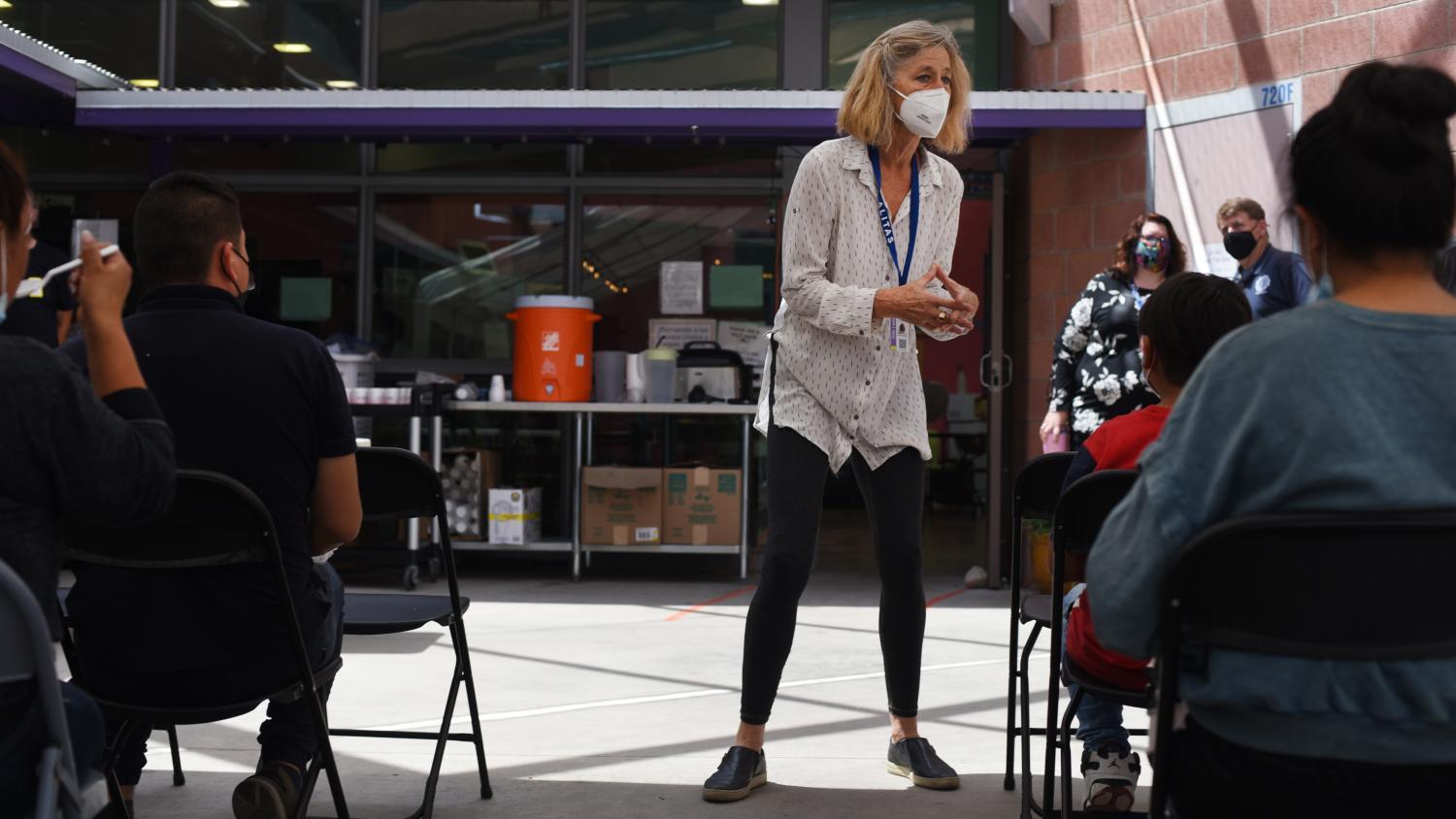 Alisa Reznick/AZPM
A staff member with the Casa Alitas Welcome Center gives an orientation to migrants who have just been brought from Nogales by the Border Patrol. Migrants will stay at the center for a few days while working out travel arrangements to connect with family.

I visited Casa Alitas on a very windy morning that buzzed with activity. Volunteers rushed to welcome around 60 migrants from Nogales. When a bus carrying the first group arrived, a Border Patrol agent stepped out to grab suitcases and told volunteers another bus was on the way.

They weren’t the same families I met in Nogales. Casa Alitas is a common pit stop for a lot of families arriving in Arizona.

Diego Peña Lopez with Casa Alitas says the shelter receives around 40-130 people a day, some are brought by the Border Patrol and others through the humanitarian exemption program. But they usually spend less than 48 hours here. He says staff help book flights, give COVID tests and offer vaccines. They’re also trying to answer questions.

“Issues with medical is addressed, family separation, concern with their court hearings, paperwork problems, and then getting them to their sponsors in the U.S. Which is another journey in itself,” Peña Lopez said.

Last month at a shelter in Nogales, Sonora, I met Yessica, a Mexican asylum seeker who gave a pseudonym because she’s worried the interview could affect her case. She was waiting to eventually make that journey with her 13-year-old son. This month, they made it. 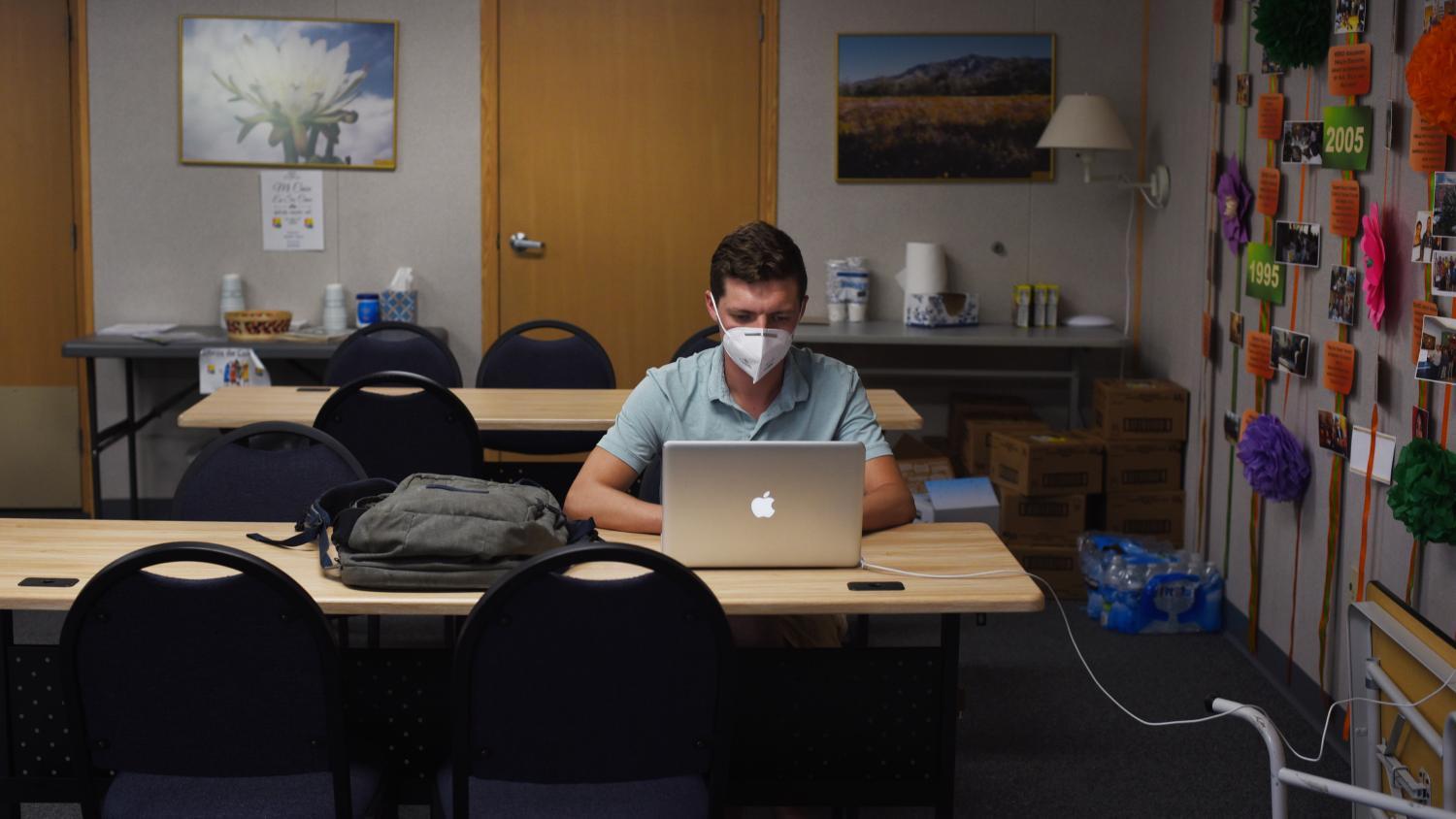 Alisa Reznick/AZPM
An aide worker with the International Rescue Committee works on his laptop while awaiting asylum seekers who are being processed by DHS at the port. Asylum seekers spend about an hour here before boarding a bus to Tucson.

I reached her on WhatsApp soon after she'd arrived in Tennessee. She’s one of hundreds who have been able to enter the U.S. on the recommendation of the exemption program. She told me it’s hard to put into words the gratitude she feels for those who helped her get there.

“Thanks to God, they gave us very good support and believe me, I thank them from the bottom of my heart because they are very good people and they try to help everyone.” she said.

But she said there’s still so much she doesn’t know. For starters, she has court in September, but doesn’t have a lawyer. To get one, she needs money, she said, and she doesn’t know if she’s allowed to work.

“So, the truth is I don’t know what will happen,” she said.

That’s a question Alex Miller, an attorney with the legal aid group Florence Immigrant and Refugee Rights Project, hears all the time. She says the exemption program helps some people enter the U.S., but it’s just one small step in a patchwork process. And there’s no guarantee of what comes next.

“Many, many people, especially without counsel, may end up being denied and may end up facing removal,” she said. “And that’s the harsh reality.”

Still, Miller says her group tries their best to see that migrants like Yessica have as fair a chance as possible at getting to the U.S. At least for now, that starts at the 600 meter border crossing in Nogales.