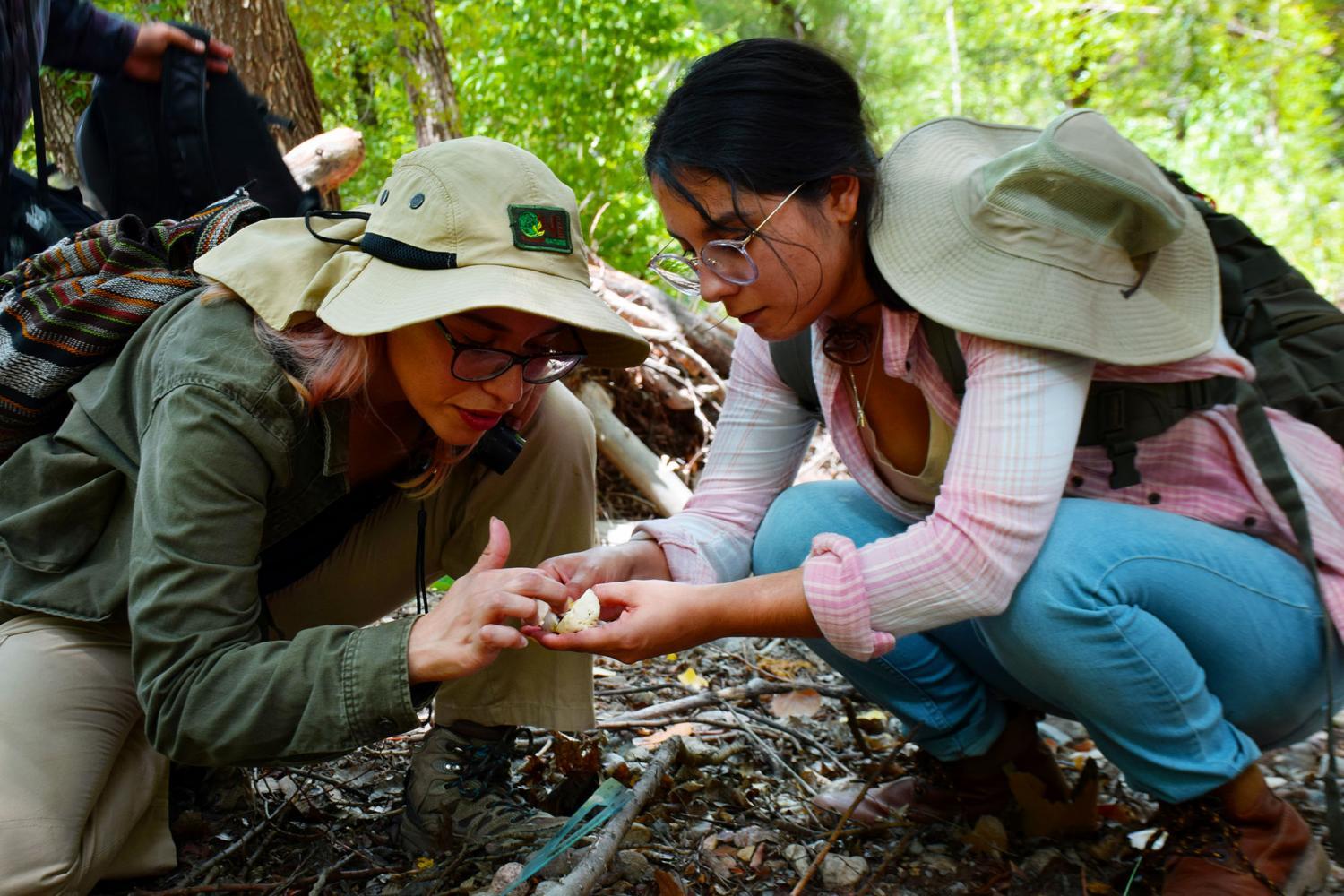 Anays Blanco buckles her seat belt and puts a large white van into gear, then takes off on the rough dirt road leading to Rancho Los Ojos Calientes. It’s part of the protected Cuenca Los Ojos reserve, where she is co-facilitating a weeklong field course for eight young Sonoran conservationists packed into the back of the van.

The course is designed not only to teach them about major restoration issues in the Arizona-Sonora borderlands, but also leadership skills they’ll take back to their home communities,” she said.

“That’s the goal, to give them leadership skills so that they don’t just keep what they learn for themselves, but take it back home with them and share it, so they can make a change, create a change,” she said.

The Arizona-based Borderlands Restoration Network has offered the field course for several years now in Patagonia, Arizona. But this is the first time it’s entirely in Mexico, in Spanish and for Sonoran students and young professionals. 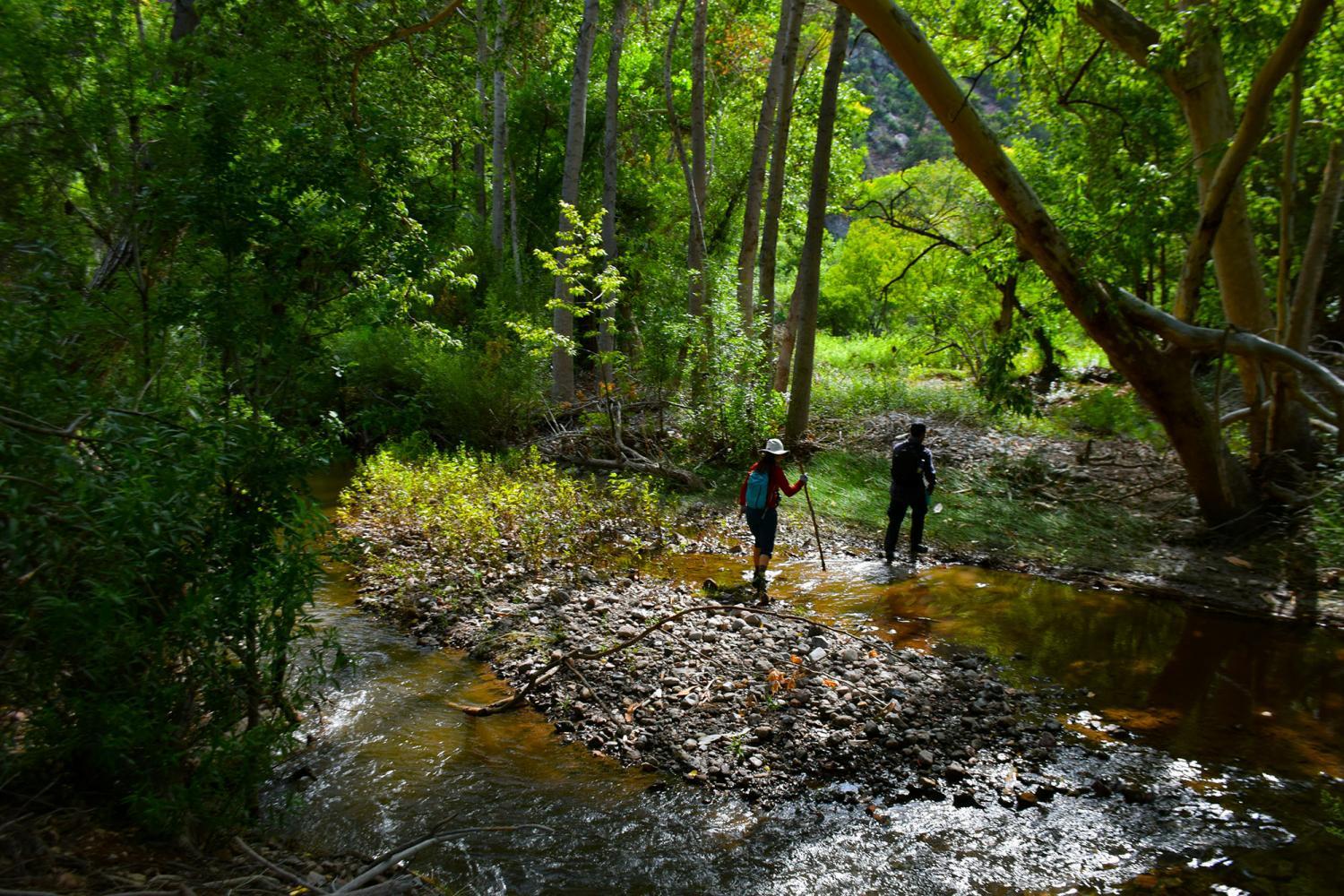 Kendal Blust/KJZZ
Members of the field course cross the Cajon Bonito stream during a hike on July 30, 2021.

The group spent seven days camping in the borderlands, and learning from experts on restoration economy, wildlife corridors, native seed collection and plant propagation and building rock structures to control the flow of water and prevent erosion.

It’s a warm Friday afternoon. And the students — decked out in long sleeved shirts and protective wide-brimmed hats — collect rocks to build terraces on a hillside.

“That’s really impacted me are the really basic techniques that we’re learning that are so important in restoration,” said Sofia Vasquez, a 24-year-old college graduate who’s just starting her career in conservation.

She said in just a few days, they’ve soaked up a variety of practical skills that they’ll use t to develop projects back home. Projects like a pollinator garden, a native plant nursery, even a business using parts of agave plants discarded in the production of the Sonoran spirit Bacanora.

After building terraces, the course participants trek through Cajon Bonito — a box canyon tucked into the southern edge of the Peloncillo Mountains less than four miles from the Arizona border.

They periodically wade through the perennial stream as they work together to identify native plants and tracks left by racoons and black bears.

For many, it’s the first time they’ve visited the Sky Islands of Arizona and Sonora — and perhaps more important than the skills they’ve learned, some said, are the connections they’ve made with each other and this place.

Early on Saturday morning, the group packs back into the van, this time headed to the border city of Agua Prieta to paint a mural. The field school crew collaborated with the binational nonprofit Border Arts Corridor to create a public art piece highlighting native plants like ocotillos, Arizona poppies and Thistles.

“This has really given me the enthusiasm to keep going,” said Sofia Vargas, as she brushed soft green paint onto the background of the flower-filled mural. “Conservation work can be demoralizing sometimes. But then you see that there are so many possibilities, especially when you collaborate with others.” 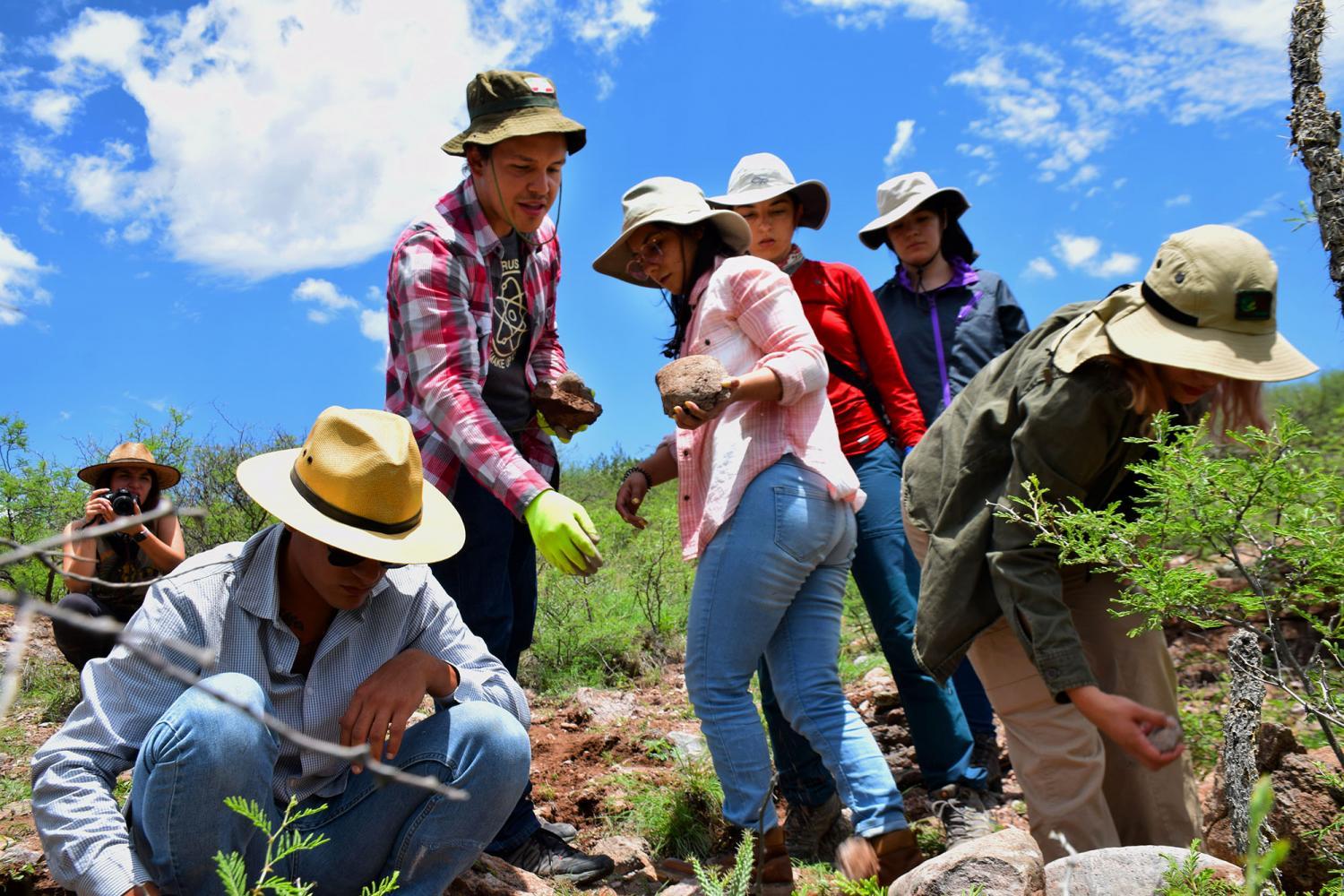 Vargas, who leads a collective in Hermosillo dedicated to protecting natural spaces and reforesting the city, said she already has plans to team up with other members of the field course to start a native plant nursery.

“We are building this little network here in Sonora,” said Jorge Chacon, who co-facilitated the course with Blanco.

When the course is over, participants will go back to communities across the state, but now with a support system they can turn to to collaborate on projects, or for help when they run into hurdles. And equally important, he said, are cross-border ties they’ve made with Borderlands Restoration and its partners.

“Because there’s no sides,” he said. “As an ecologist, as a biologist, you learn that there is this land, all these ecosystems that are the same. It’s the same land.”

And because the ecosystems of Arizona and Sonora are shared, much of the restoration work needed here requires binational collaboration, he said.

Seeing first hand those connections, and the ways they’re broken by the border — and border wall — is what Miranda Diaz said will stay with her most from this week.

“It’s kind of sad. And to see for yourself how that barrier stops them, it’s like, wow, super impactful,” she said. 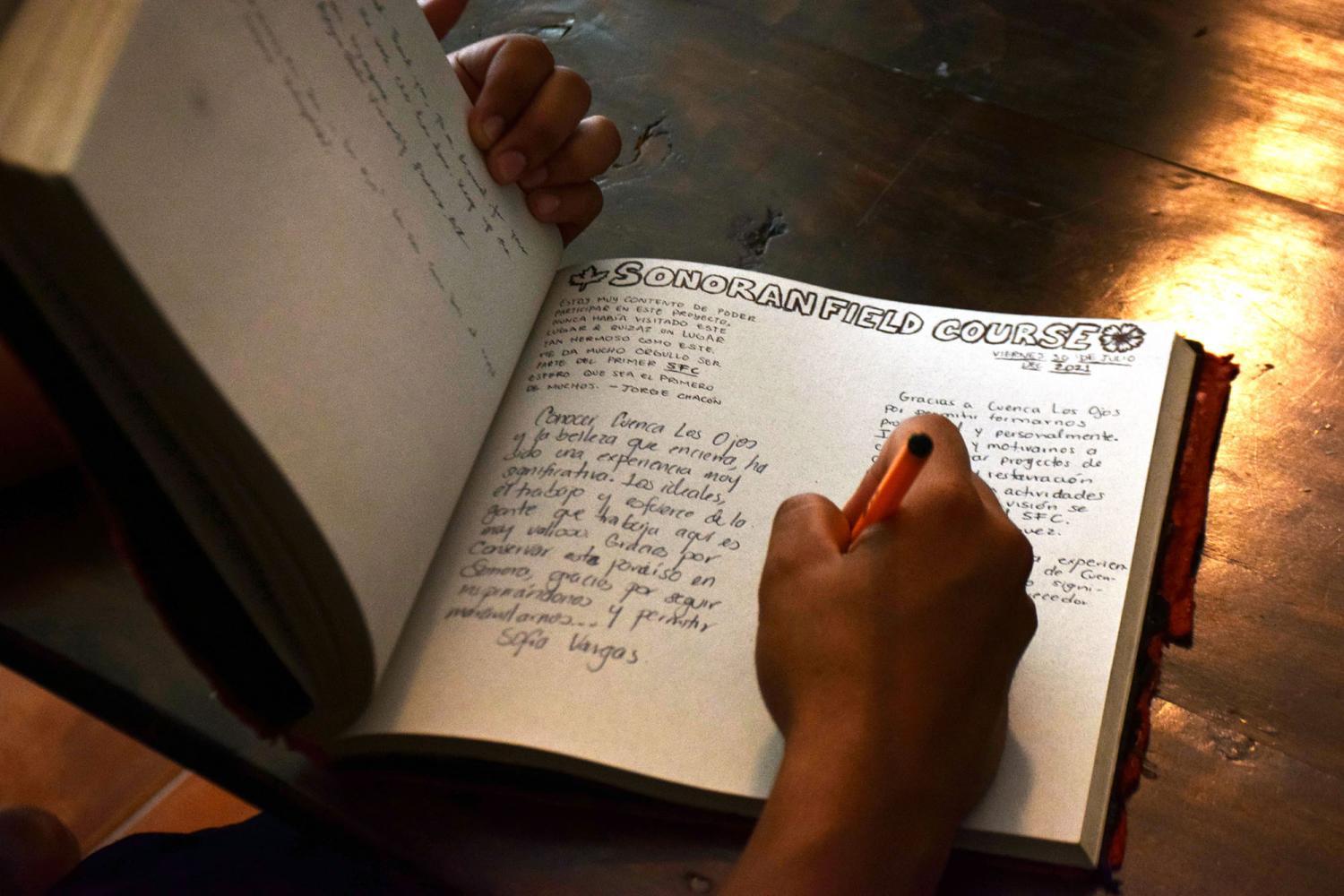 Kendal Blust/KJZZ
A student signs a book for the Sonora Field Course on July 30, 2021.

From animals that for generations have crossed back and forth between Arizona and Sonora, now trapped on one side, to families separated by pandemic travel restrictions and migrants struggling to find a way north, she said most Sonorans know about these realities. But it’s different experiencing it up close.

“I spent half my life living in the borderlands,” said Blanco, the group facilitator.

And as someone who grew up near the border, she said, helping her peers from other parts of the state understand the complex interactions between humans and the environment in this region is part of why she wanted to lead the program. Because it’s integral to ecological conservation.

Yes, she said, restoration is about the health of land, water and wildlife. But also of individuals and communities that live in and move through the borderlands.

“Because, really, we’re all migrating creatures,” she said. “And we’re all connected.” 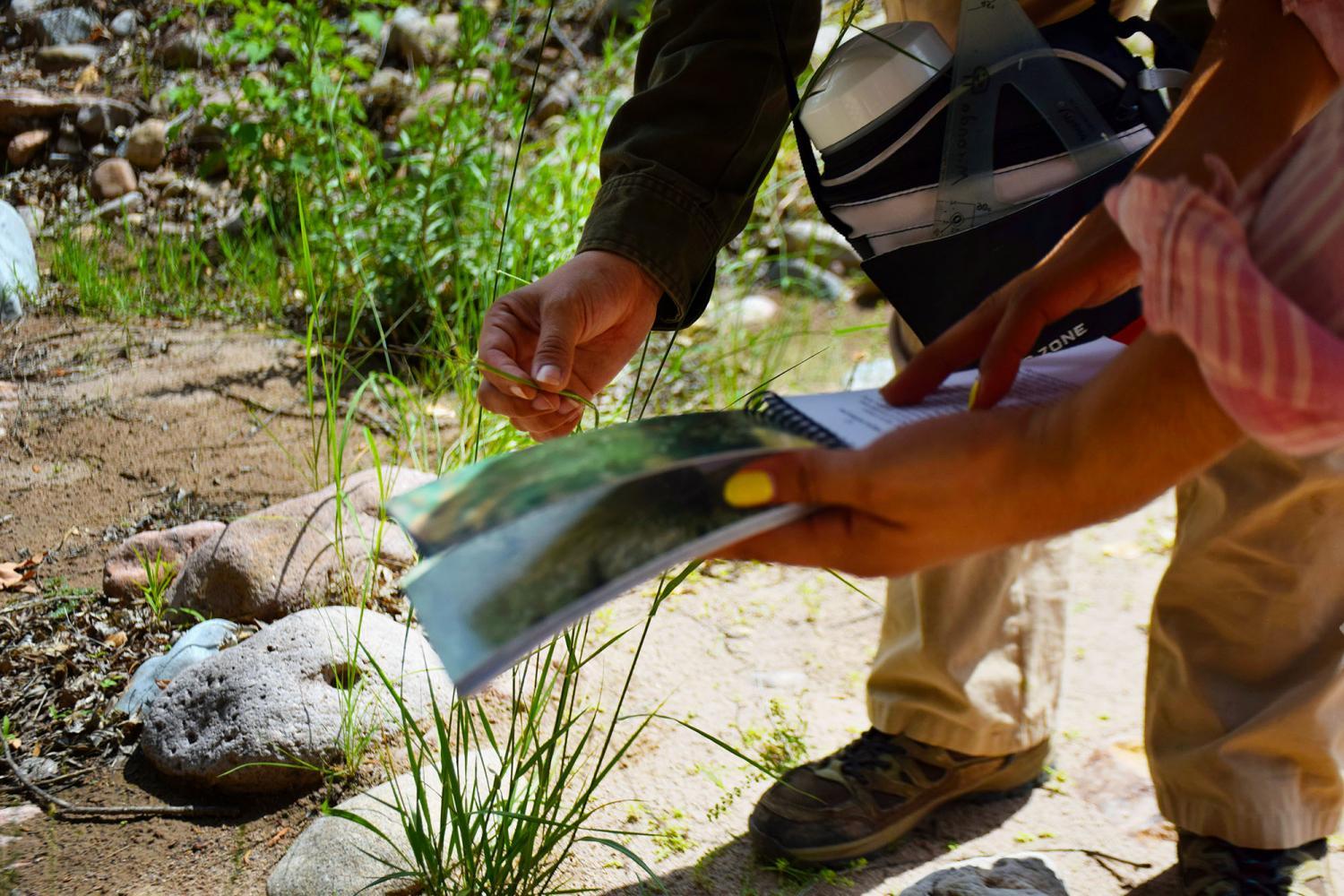 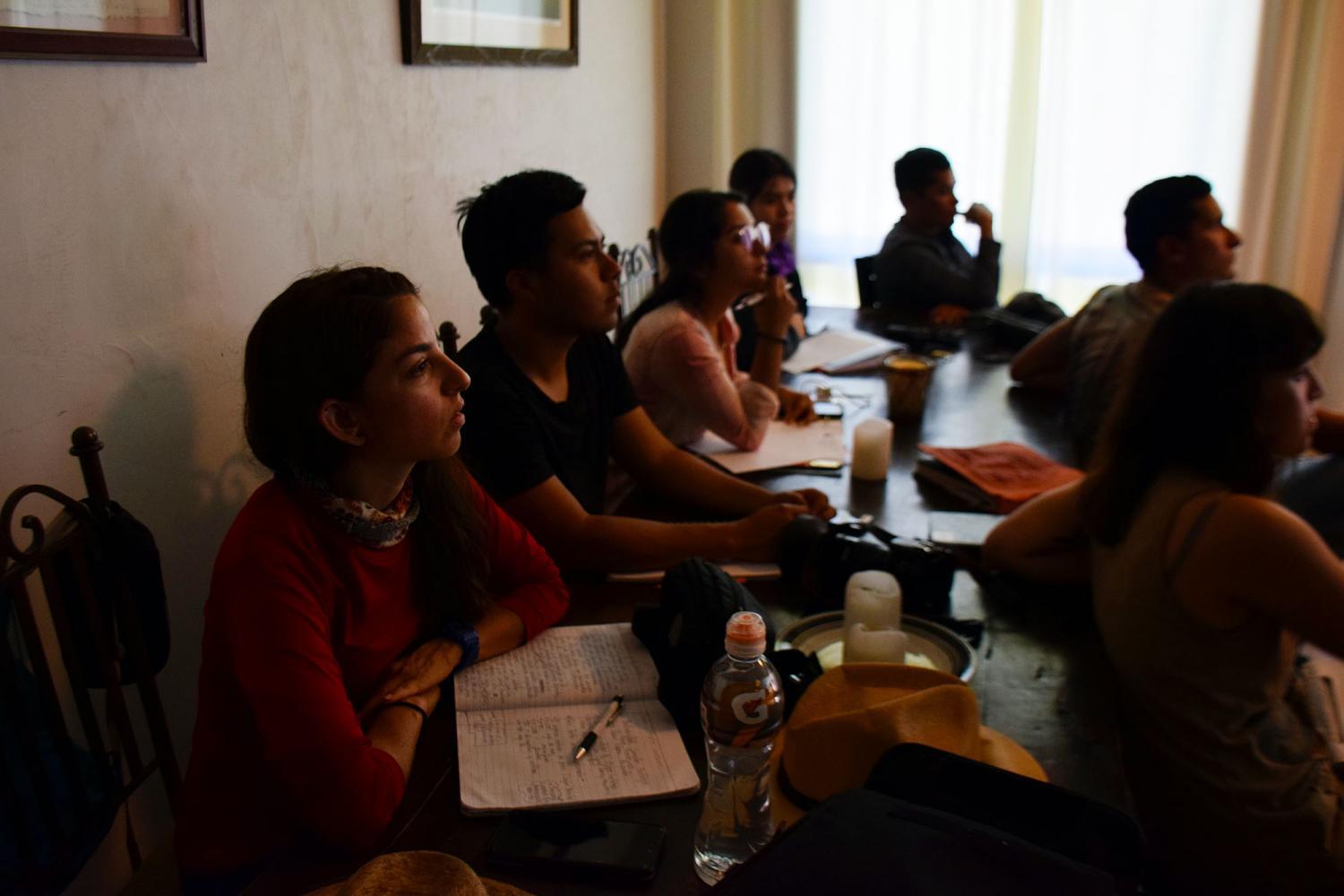 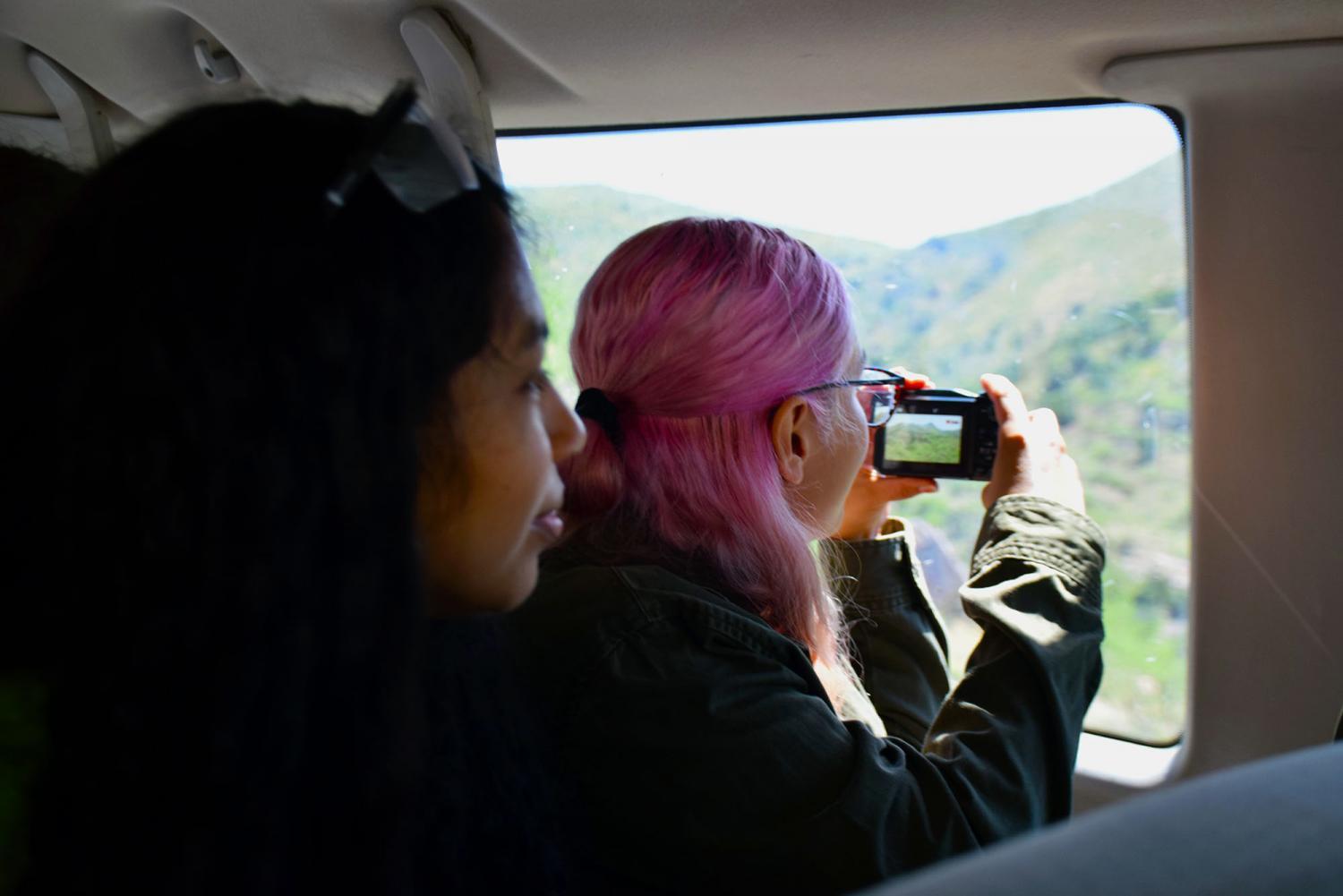 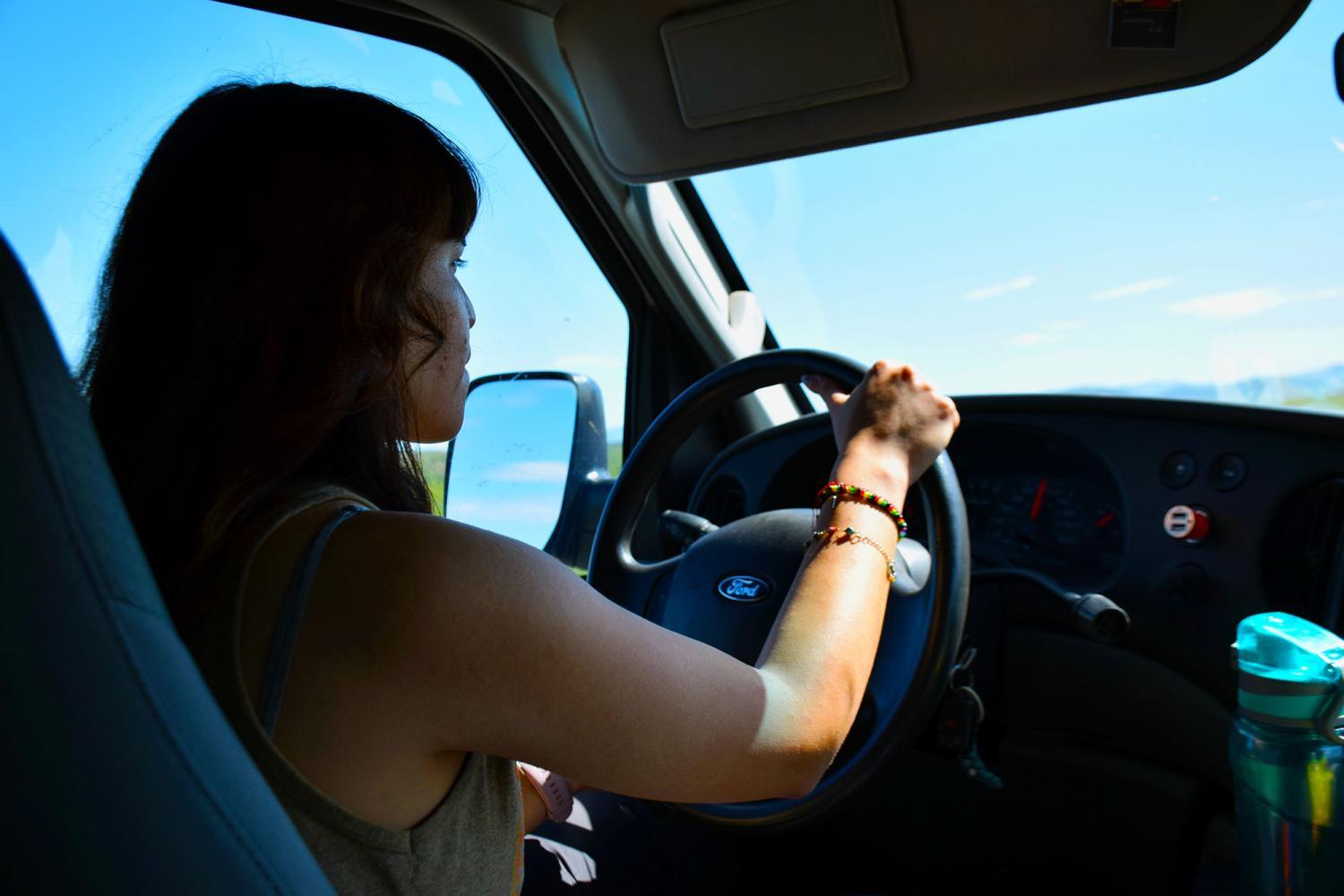 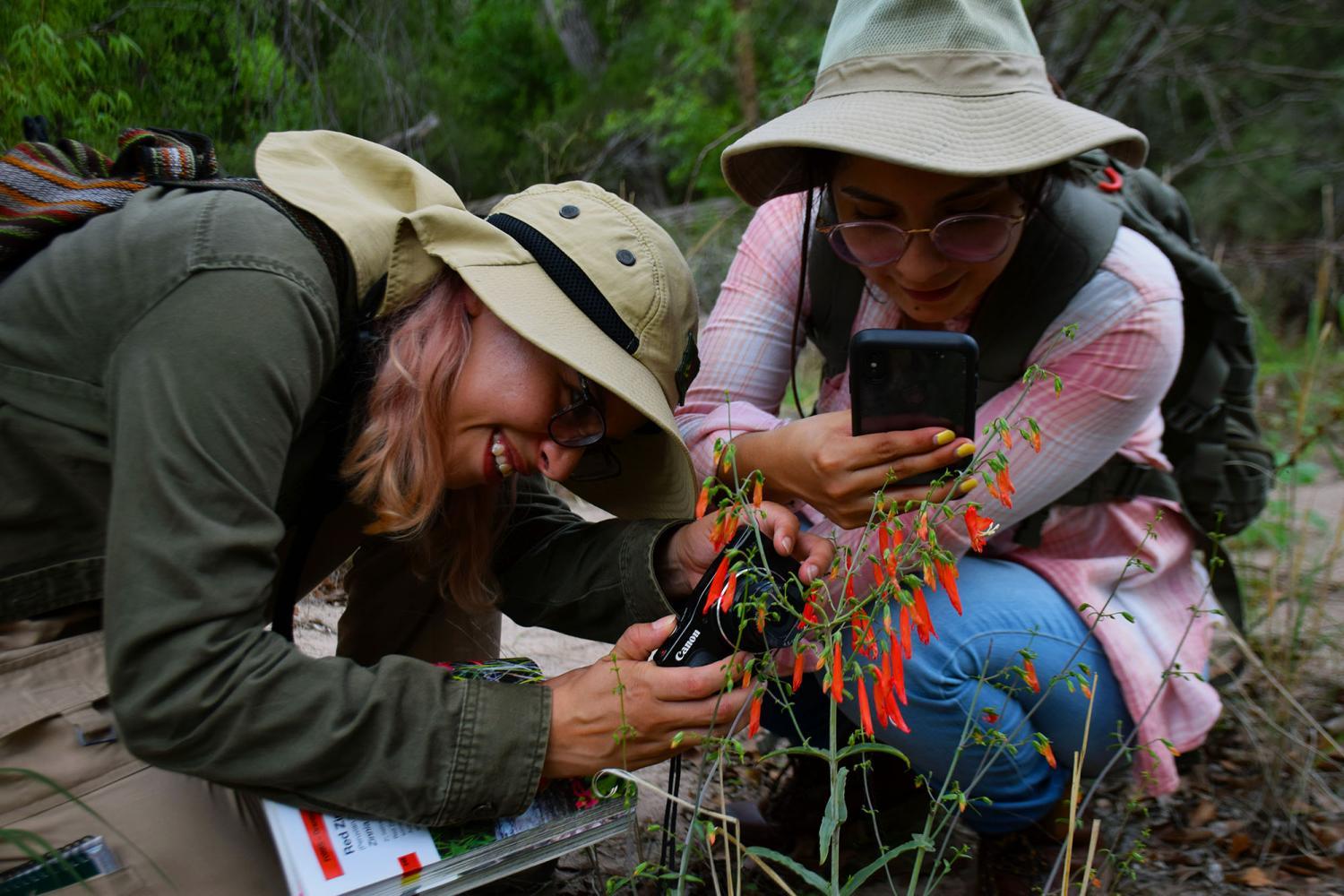 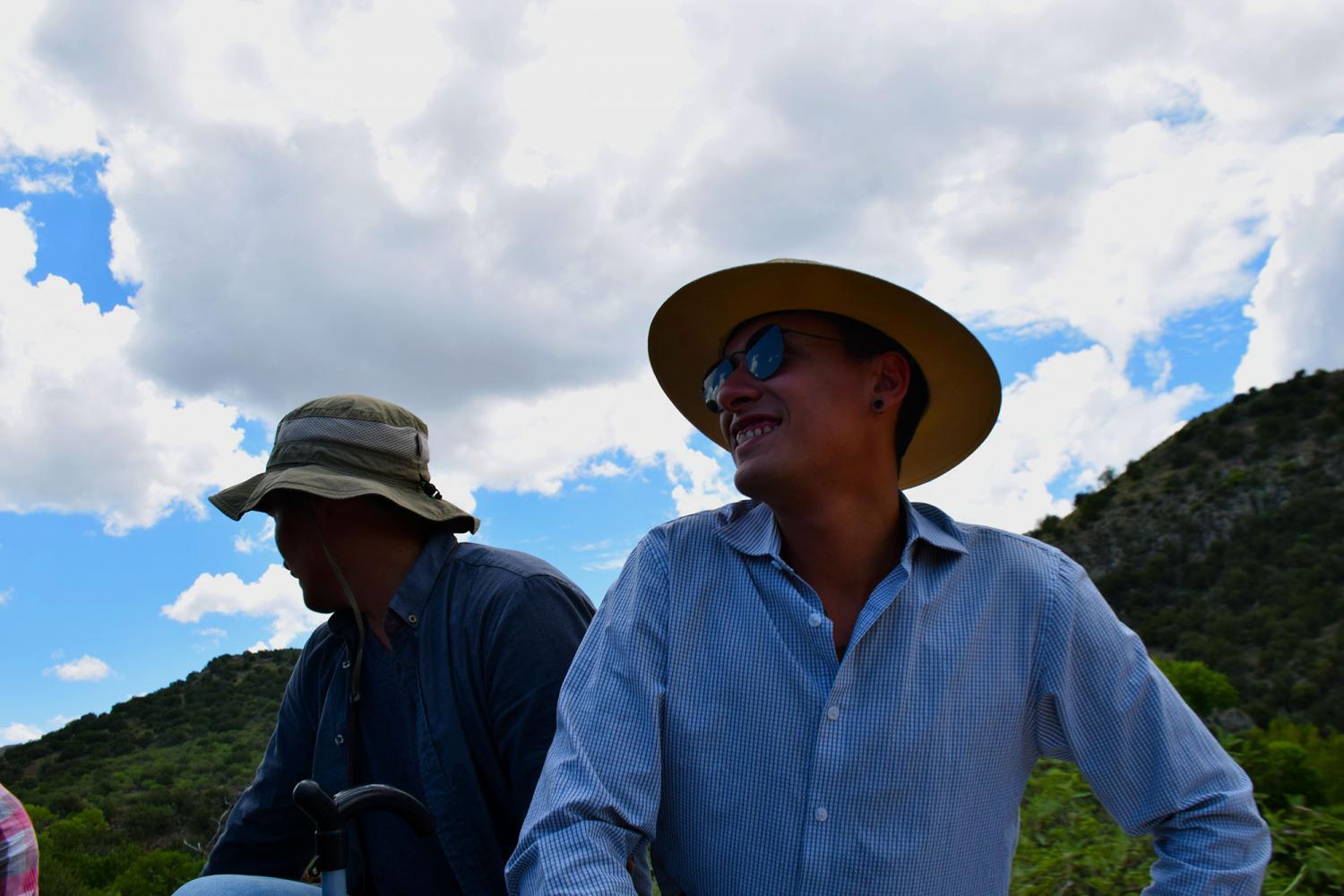 Kendal Blust/KJZZ
Course facilitator Jorge Chacon and participant David Gastelum ride in the back of a truck to a site where they will help build terraces on July 30, 2021. 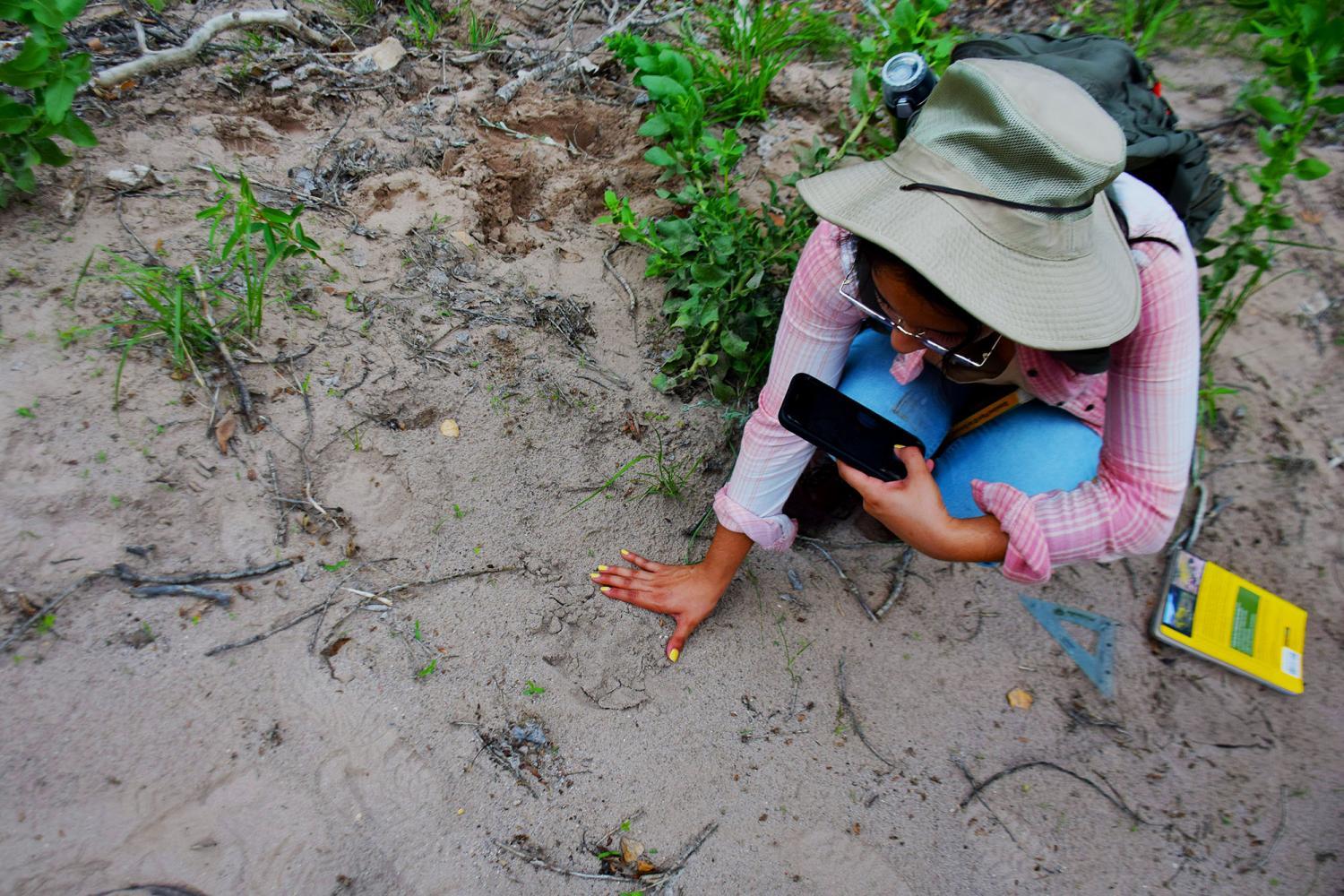 Kendal Blust/KJZZ
Sofia Vasquez take a photo of a bear track on July 30, 2021. 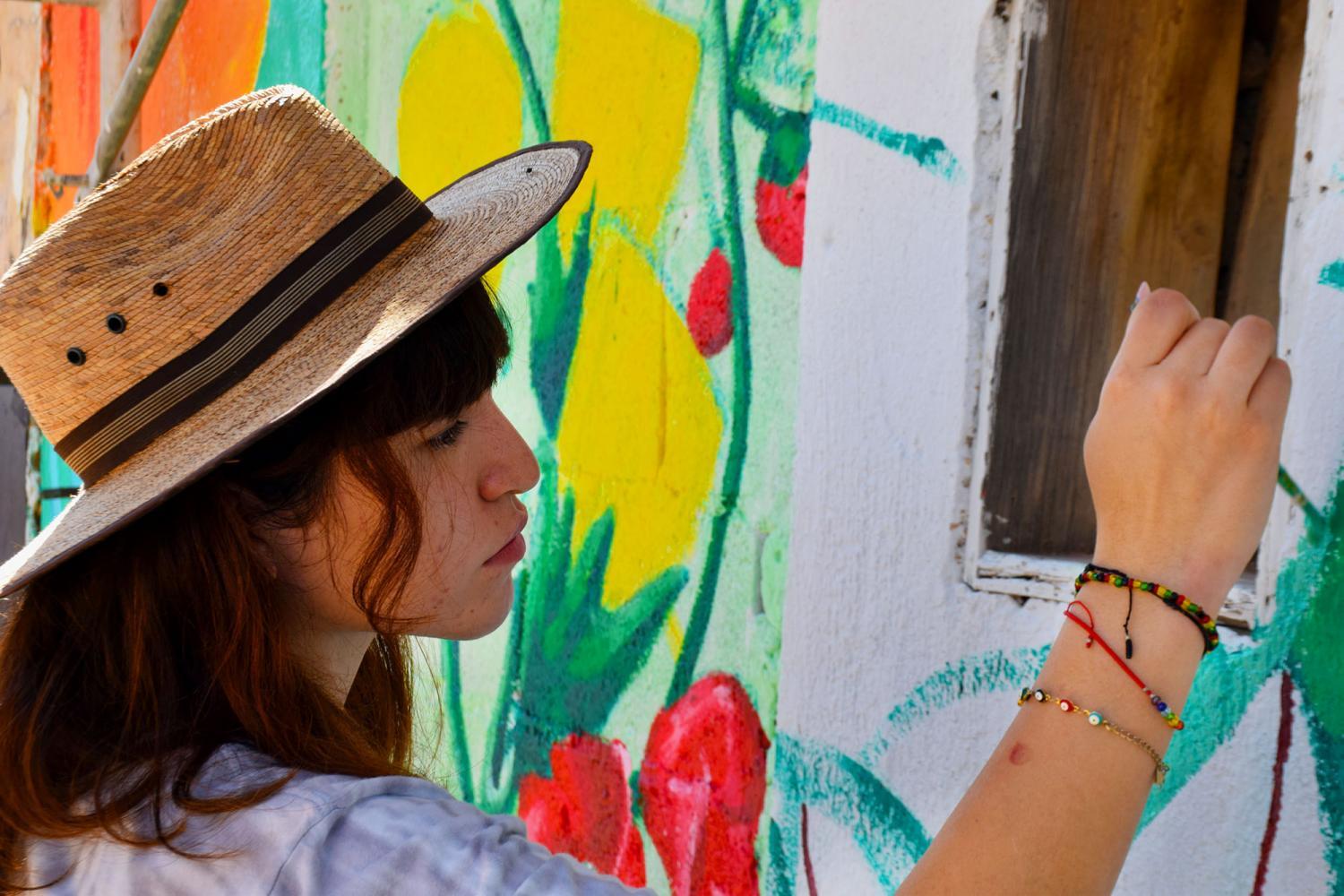