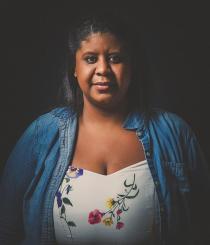 Rachel Lynett’s winning play, “Black Mexican,” opens with a student questioning whether a professor is Cuban.

According to them, this becomes a catalyst for exploring who gets to participate in what’s known as Latinidad — a Spanish term referring to various attributes shared by Latin American people without reducing them to any single trait — also referred to as monoculture.

Speaking on a recent edition of ATC’s vidcast, “Hang & Focus Live,” Lynett said they, “tend to write about identity, politics and queerness. I like to write about complicated, messy women of color who make the wrong choices. That’s who I’ve always been drawn to. I like people who are complicated.”

Lynett said other characters are of Dominican, Haitian and Belizean descent.

ATC associate artistic director Chanel Bragg said in a press release, “'Black Mexican' is not only topical to the moment, but pertinent to enforcing a much-needed dialogue in relation to anti-blackness today.”

Lynett receives $1,000 and the play will be read as part of the Latinx New Play Festival in September.