The gap between white and Latino vaccination rates has been shrinking in the U.S. But gains have been uneven, and in Arizona, there’s still a major disparity between the demographics.

Data from the Kaiser Family Foundation shows about 53% of all white Americans have had a shot, while about 49% of U.S. Latinos are vaccinated. The 4-point difference has shrunk from an 8-point difference in July.

In Arizona, the disparity has hardly budged over the past few months. About 49% of white Arizonans are vaccinated, but just 31% of Arizona Latinos have had a shot. That 18-point difference is the third-widest gap among states that report that data.

Racial and ethnic data on vaccines is inconsistent nationwide. In Arizona, race or ethnicity is recorded as “other” or “unknown” for more than a quarter of vaccines administered in the state. 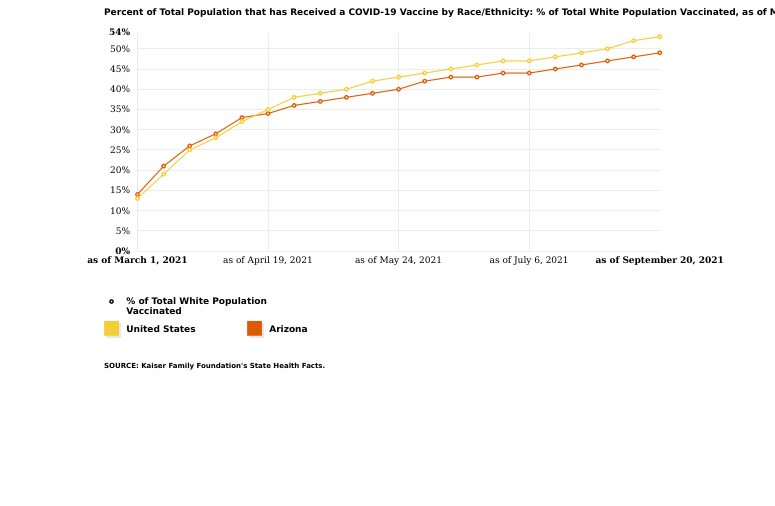 Still, the data suggests a disparity that has persisted for months.

When Arizona began its vaccine rollout, critics pointed out that the state’s vaccine registration website was not initially translated into Spanish and that the state health department’s early vaccination strategy centered around drive-through PODs, which were difficult to access for some lower income people without reliable transportation.

Months later, some issues of access have been resolved, but other challenges remain, said Janey Pearl Starks, director of equity, diversity and engagement with Mountain Park Health. The nonprofit clinic runs a vaccine site in the predominantly Latino Phoenix neighborhood of Maryvale.

“At this point we have tried to remove every possible barrier. We have walk-in clinics, we’ll schedule your transportation to get you there, you can sign up online if you want an appointment,” Pearl Starks said.

“What we know here when talking to our patients, is a lot of people are getting their information from TikTok or from Whatsapp,” she said.

Her organization recently received a $1 million grant to knock on doors and promote vaccine education. But Pearl Starks said she also hopes to see the Arizona Department of Health Services invest more in vaccine messaging. 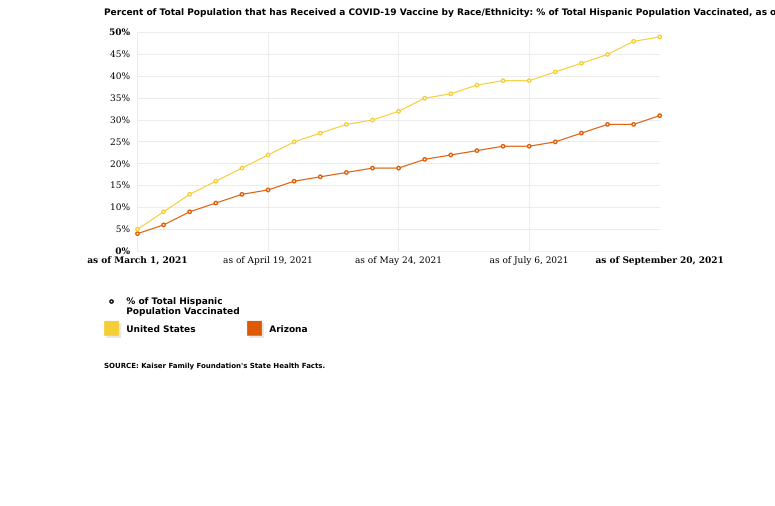 “I haven’t seen too much from the state saying, ‘Hey it’s still important to get vaccinated, here’s easy ways to do it.’ That’s what I think is missing right now,” Pearl Starks said.

Jessica Rigler, assistant director for the division of public health preparedness with the Arizona Department of Health Services, said the state is working on the issue. She said the department has been running a vaccine equity task force with members from health care organizations across the state.

“We talk about the data and additional strategies that could be implemented in order to improve vaccination coverage across a wide swath of different kinds of demographic and population groups,” Rigler said.

But Rigler acknowledges there is more work to be done.

"It’s something that we have never stopped monitoring,” Rigler said.  “We’d like to see coverage much higher than it is across the entire state.”

To learn more about the disparity, The Show spoke with KJZZ's Katherine Davis-Young.