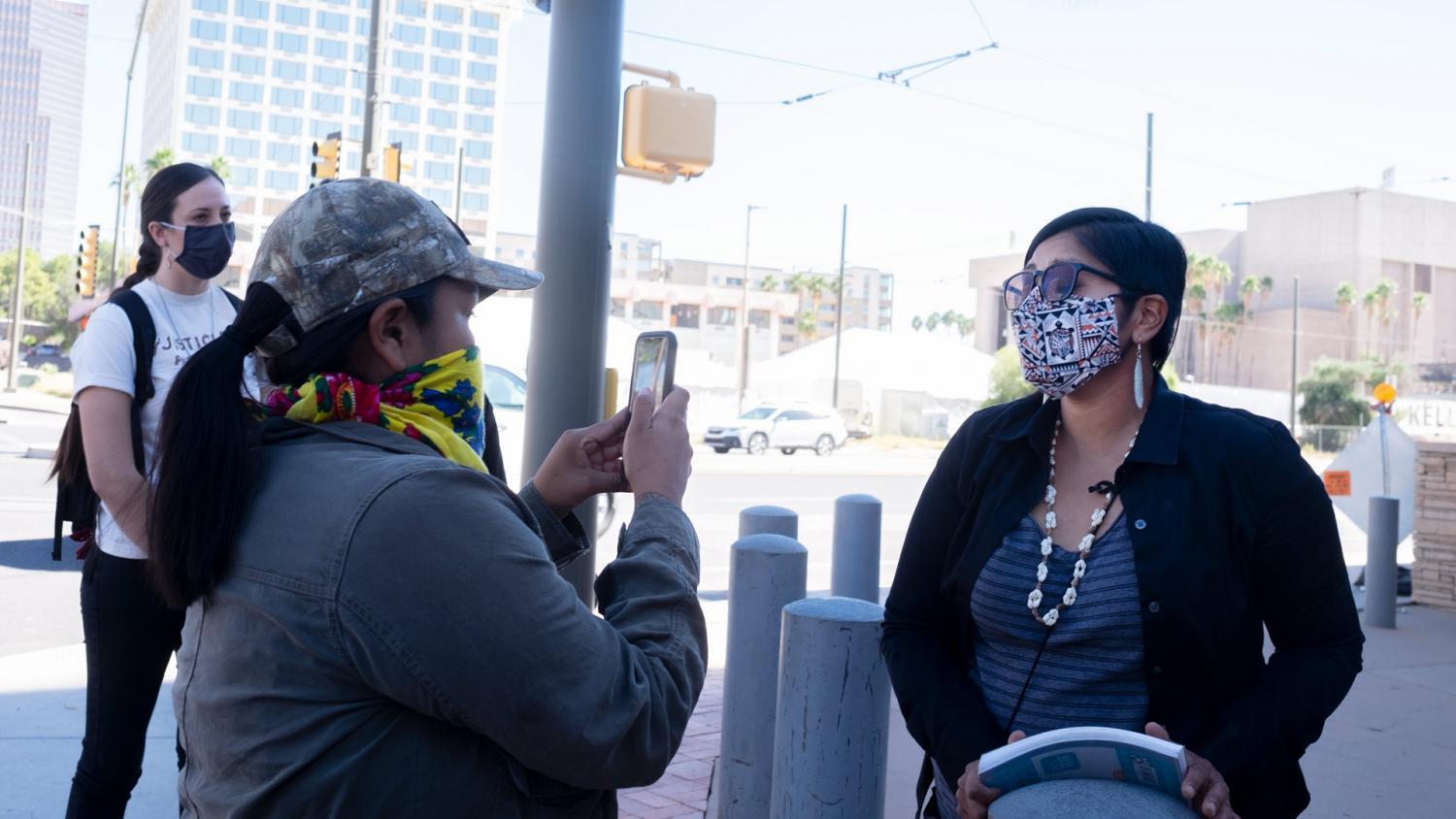 Alisa Reznick/KJZZ
Amber Ortega speaks with supporters outside the Evo A. DeConcini U.S. Courthouse in Tucson after her trial on Nov. 4, 2021.

Before it was part of Organ Pipe, Quitobaquito was a homestead to the Hia C-ed O’odham, a tribe related to the Tohono O'odham Nation that is not federally recognized. On Tuesday, Amber Ortega told Federal Magistrate Judge Leslie Bowman that this spring is where her relatives come from. When she heard wall construction taking place while praying there one morning in September of last year, she said was moved to protect it.

That morning, Ortega and another Hia C-ed O'odham protester stayed at the construction line chanting, singing and shouting, for about an hour. National Park Service officers told them to leave and arrested them when they didn’t. The other protester, Nellie Jo David, did not take her case to trial.

Ortega's defense on Tuesday argued her religious and cultural beliefs compelled her actions and should be protected under the Religious Freedom Restoration Act.

Federal prosecutors argued those beliefs do not negate the fact that she interfered with federal government activities taking place on federal land. They called one of two NPS officers who arrested Ortega to testify about that day.

"People think going to pray is in a church," she said. "But the people I come from do our ceremony in many places ... To us it's [Quitobaquito] our church, we don't necessarily need a building or a structure over us to pray."

In her testimony, Ortega said she began making frequent trips to the spring once wall construction broke ground in Organ Pipe.

"This land is our history, it has gone undamaged for centuries," she said. "What they were attempting to do was permanent."

Assistant U.S. Attorney Vincent J. Sottosanti asked Judge Kimmins to preclude any defense that hinges on the Religious Freedom Restoration Act, arguing that "even if the change would deplete the sacredness of the land...the government can use its land as it sees fit.”

"That statement hurt to hear, because we see that happening, we see all the harms being done by the federal government, for their reason without consequence," Ortega said after the trial. "And we’re left with the pain of the events."

Judge Bowman said she needs more time to consider whether testimony related to religious freedom could be included before making a ruling. Tucson attorney Paul Gattone, said it could take weeks or months.

“Obviously they [the prosecutors] wanted this to be as easy as possible for my client to be convicted,” he said.

If convicted, Ortega faces a maximum sentence of six months in prison.