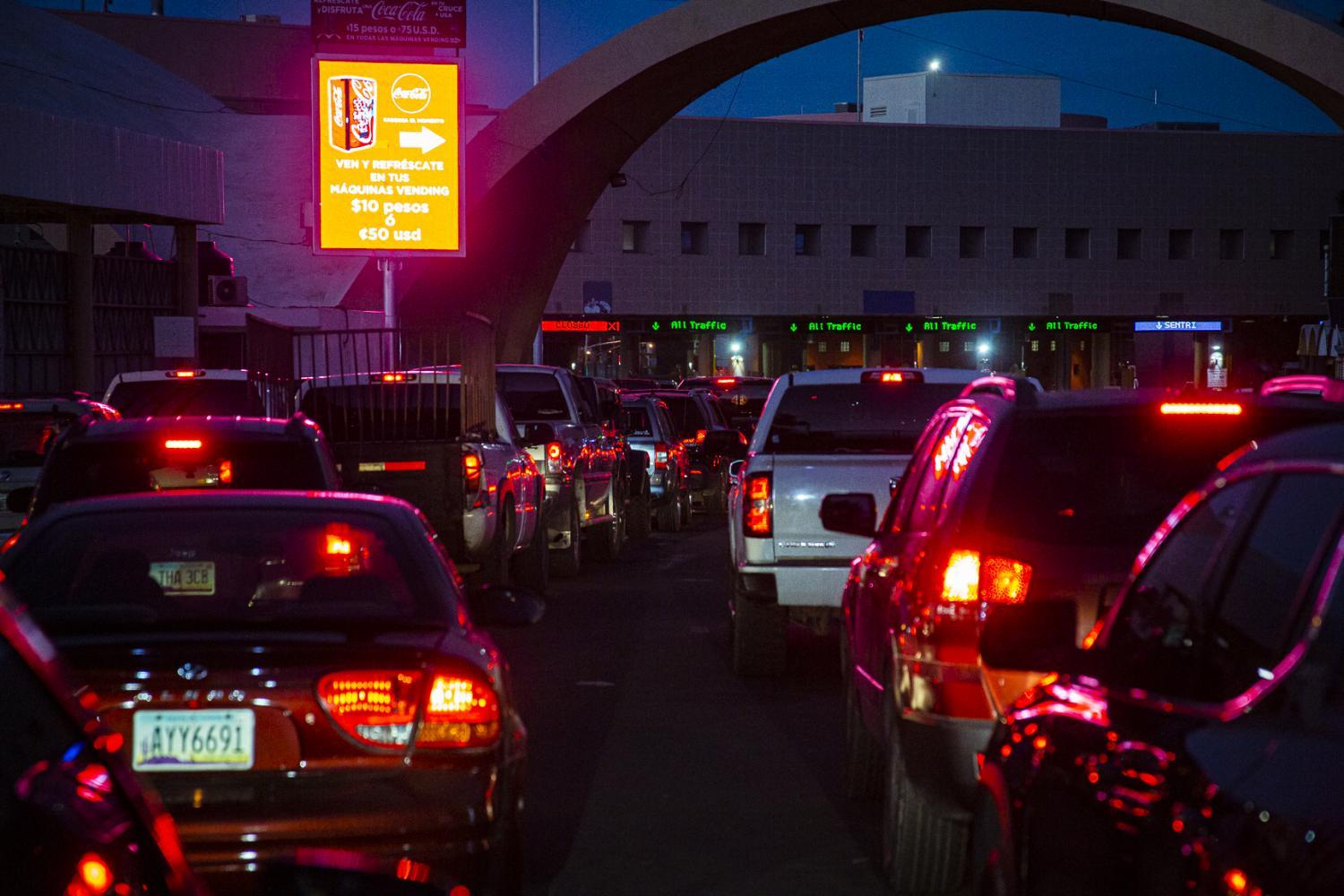 Murphy Woodhouse/KJZZ
In the hours before the restrictions were lifted, lines to cross the border in Nogales, Sonora got as long as a mile.

Early Monday morning, a booming loudspeaker announced the approach of the first vehicle to cross through a Nogales port of entry into the United States since long-standing restrictions ended at the stroke of midnight.

It was mobbed by reporters, but soon made its way to a waiting customs officer, and on into Arizona. Just behind it, a long line of cars stretched south into Sonora, as long as a mile at times in the hours leading up to the change.

Hector Garcia and his wife Martha Garcia live in Tucson, and had come down regularly while the restrictions were in place to visit their children and other family who weren’t able to cross. This was possible because Mexico never really imposed its own restrictions.

He said their return waits rarely exceeded 30 minutes, but this time they got stuck with a roughly three-hour crossing.

“We came back now to try to avoid the line,” he said. “But unfortunately it caught us.”

Fearing more long waits, he said it might be better for their family to simply visit them in Tucson, now that that is possible again for them. 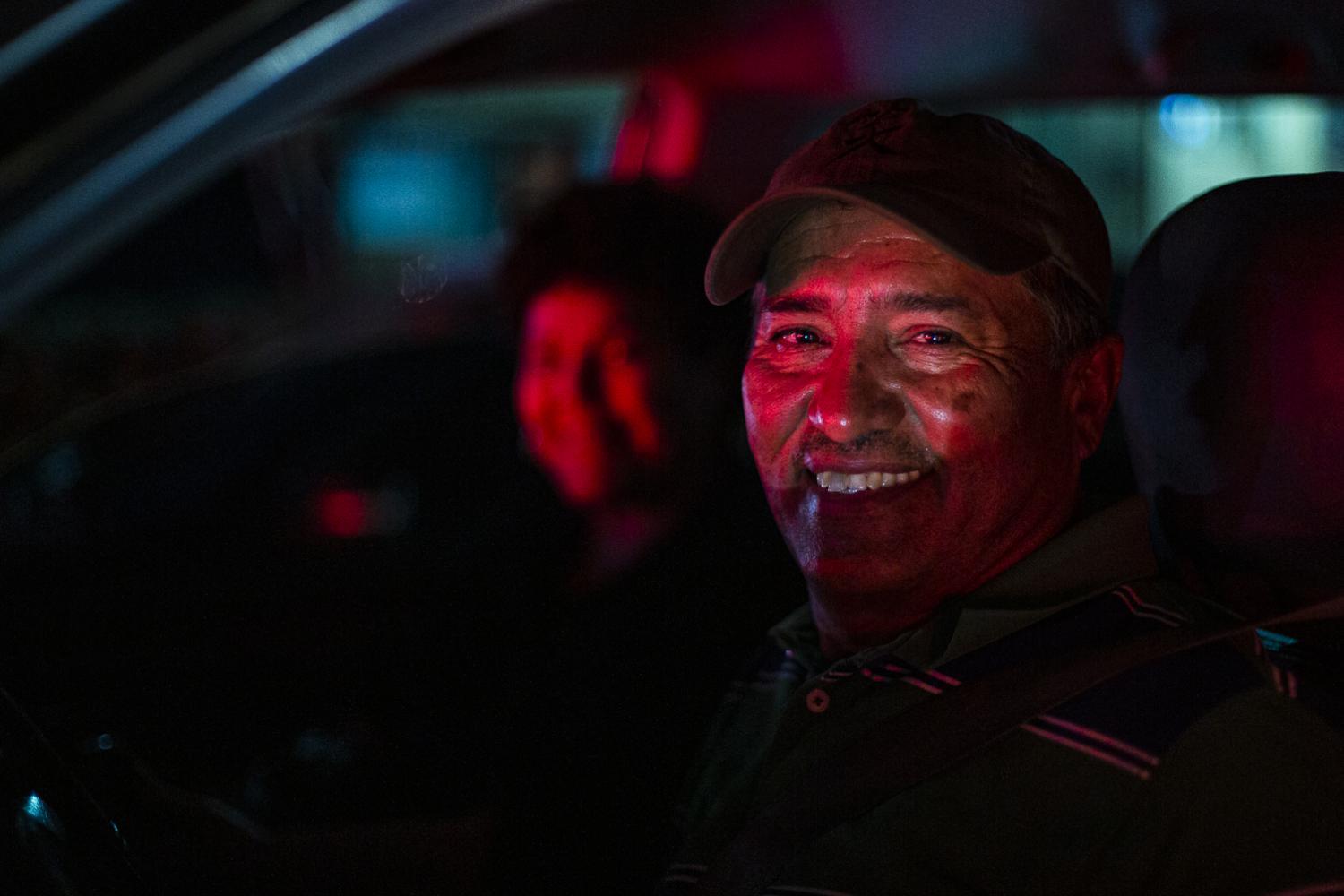 At the nearby pedestrian crossing, longtime Nogales, Sonora resident Paola Soto was the first in line, and had been patiently waiting near the port turnstiles since 6 p.m. to snag that spot. She had grandchildren in Tucson that she hadn’t seen in nearly two years on her mind.

“The family separation was the hardest thing for me,” she said.

But now, moments from crossing, her family had a table set and waiting for her just an hour north in Tucson.

By the next morning, the port-snarling lines many worried would last for days were gone. Some vehicles pulled right up to customs officers and were on the other side in a matter of minutes.

A municipal cop keeping an eye on the downtown port said that there was a rush to drop kids off for school north of the border, but that ended before 8 a.m.

“I was expecting so much more,” he said. 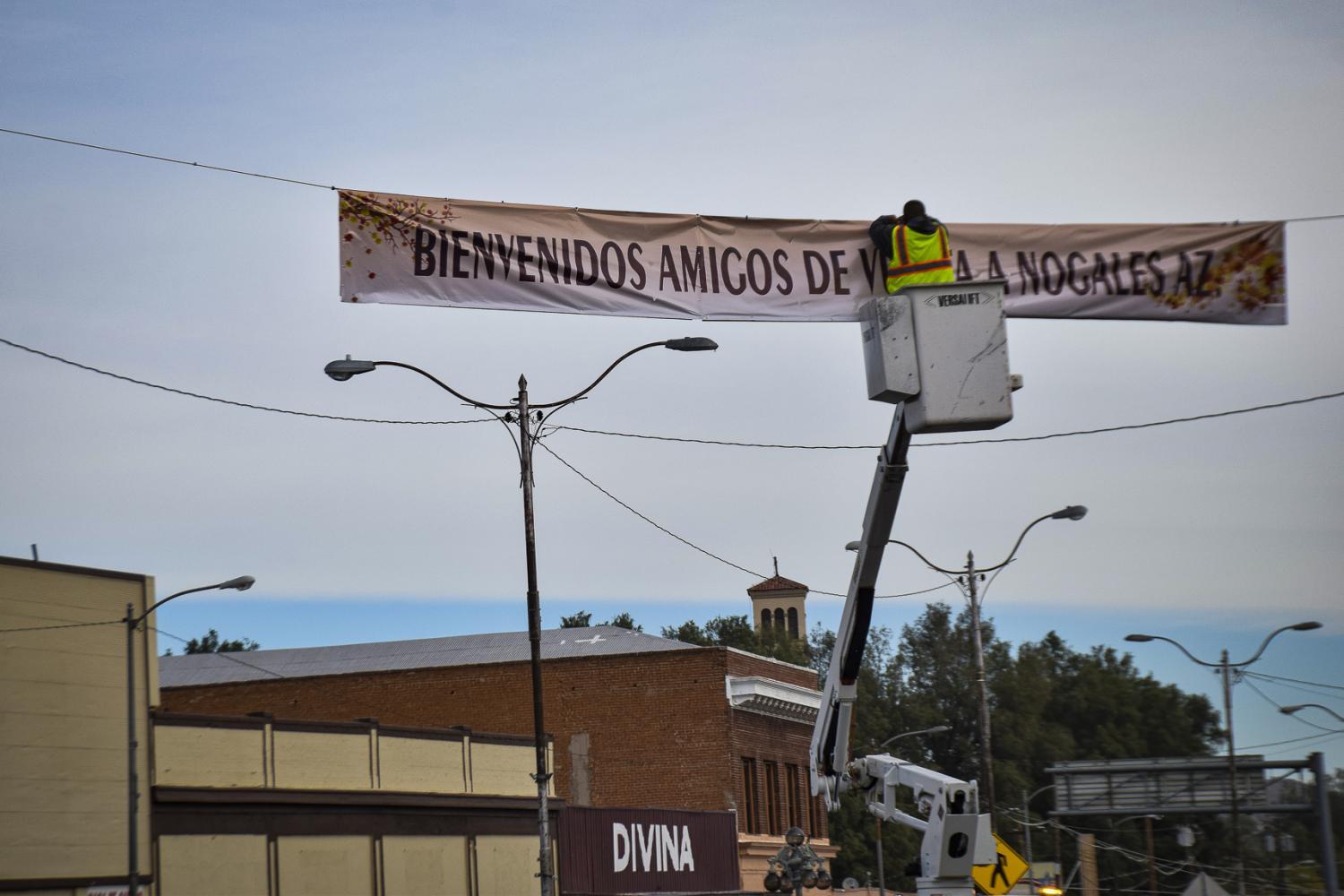 Kendal Blust/KJZZ
Nogales, Arizona, strung up a welcome banner for people crossing into the town after the restrictions were lifted.

While the long lines of border crossers had faded to just a trickle by Monday morning, it was steady; eager travelers made their way north throughout the day, many with little waiting.

“We have been traveling all night,” said Juan Pablo Valenzuela, who left his home in Ciudad Obregon in southern Sonora just after midnight to make the trip, worried that the lines would quickly become unmanageable. “But we crossed in about five minutes. We couldn’t believe there were no lines.”

He, his girlfriend, her mother and grandmother were waiting outside of downtown stores, which would open in a couple of hours, excited to spend the morning shopping once stores opened.

“Shopping. More than anything, it’s shopping,” he said of their reasons for crossing the border. “And to visit family, of course.”

After grabbing clothes, shoes, perfume and other purchases in downtown Nogales, they’ll keep heading north to family in Tucson they haven’t seen in almost two years.

“We’re really happy to be able to cross again, and more than anything to see family after so much time apart,” he said. 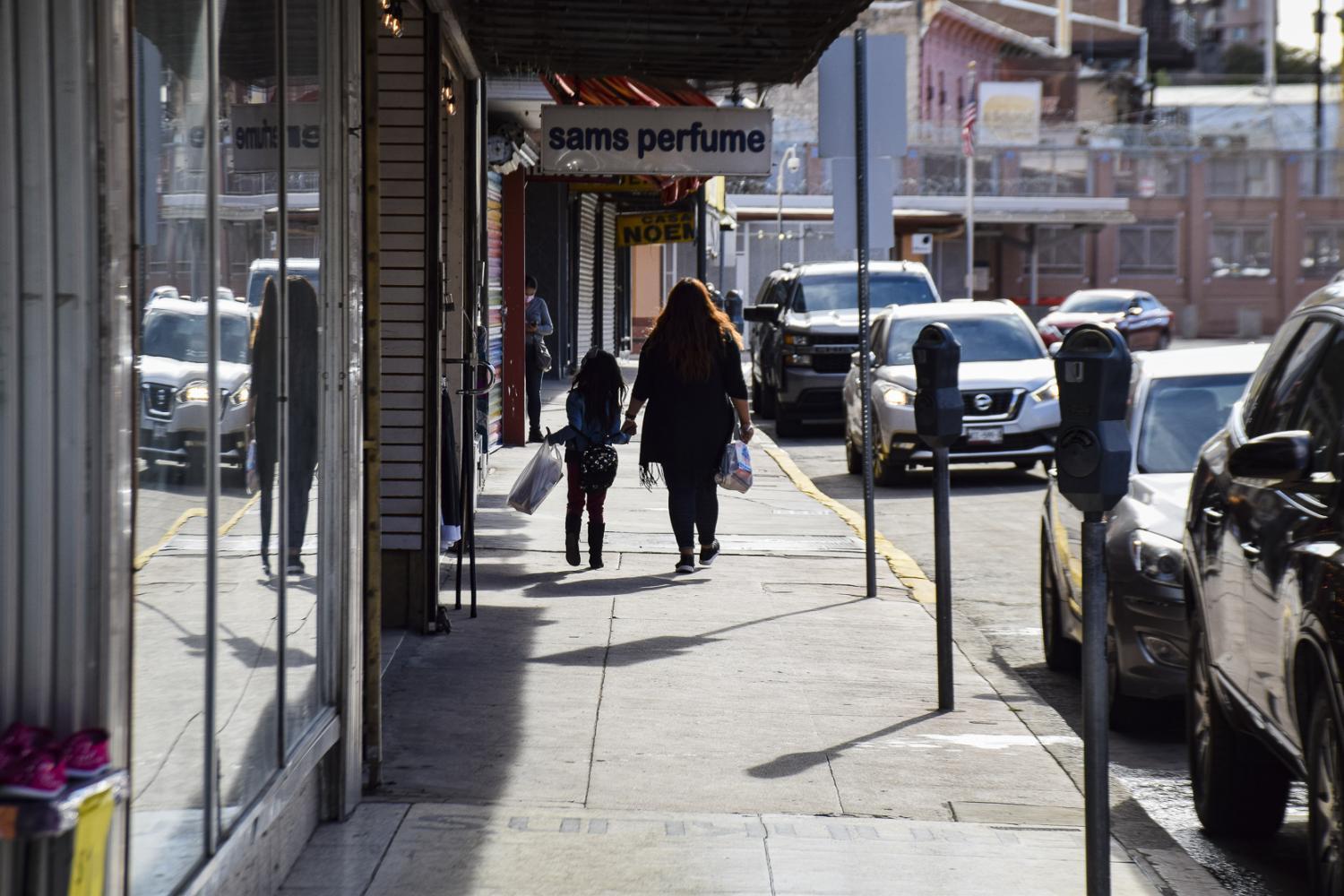 Kendal Blust/KJZZ
Morley Avenue in Nogales, Arizona, is the town's historic heart of retail, but has been battered by the crossing restrictions.

That was a common refrain from both travelers and officials, who were quick to point out that cross-border cities like Ambos Nogales are really one community.

In that spirit, businesses and city leaders in Nogales, Arizona cleaned streets and sidewalks, opened shuttered store fronts and hung up a huge welcome banner on the city’s main street.

“It’s really emotional and exciting," said Evan Kory, who was working at his family’s store La Cinderella on Morley Avenue, Nogales’ iconic downtown shopping district. “Just to see faces that we haven't seen in a long time but that we’ve known for many years, that have shopped at the store. And we’re just really happy the day has finally come, that the border has reopened.”

He said the border reopening is a relief for business owners, despite a somewhat slow first day.

“I don’t think it’s an on and off switch,” he said. “I think now people are aware that it’s open, and little by little they’ll start to reclaim their routines.” 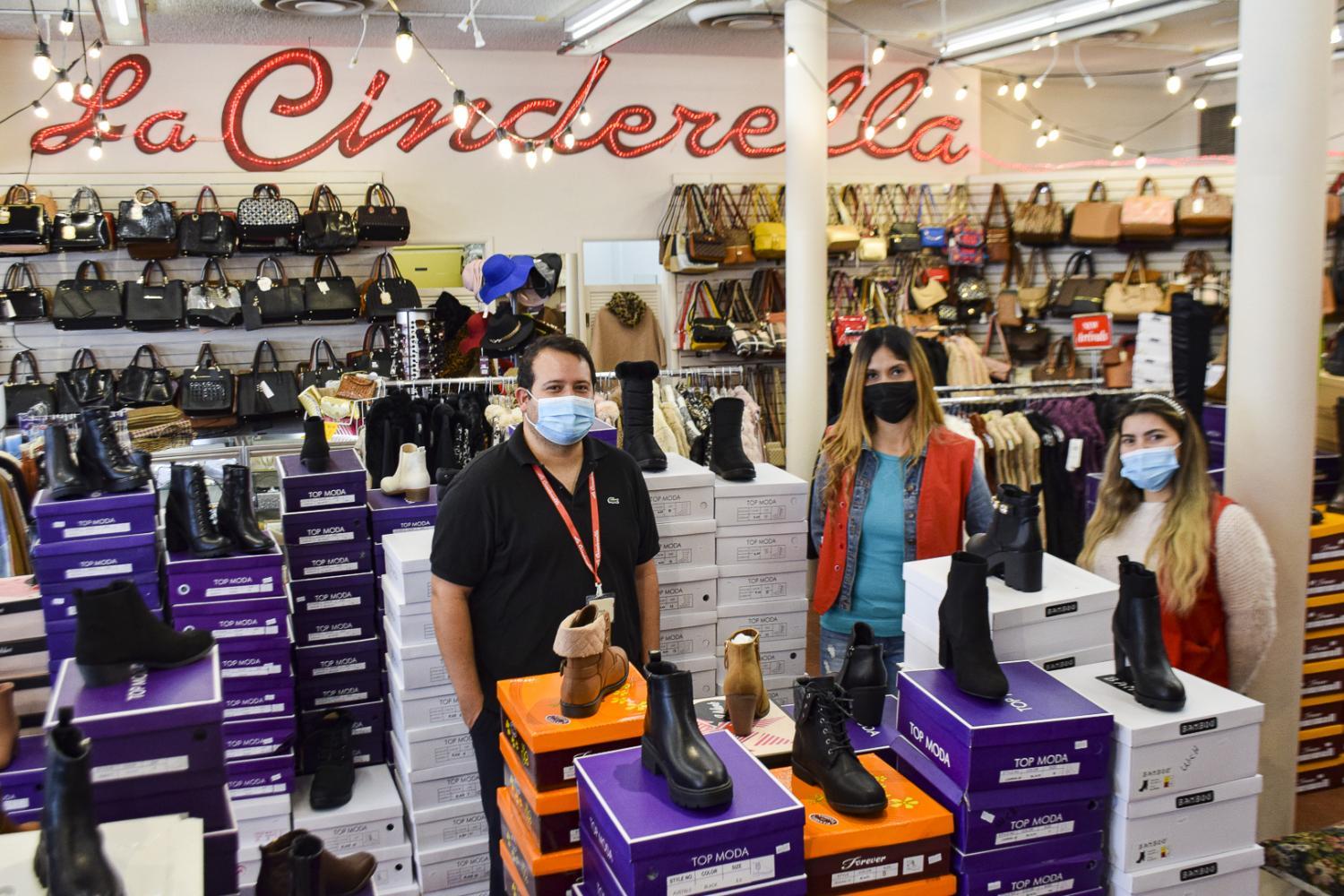 Murphy Woodhouse/KJZZ
Evan Kory's family has been in the border retail business for decades. He's hopeful that the reopening will bring better times for businesses like his.

Concerns over long lines, misinformation spreading online and new habits may be keeping the droves of tourists many expected away today, many said. But Kory thinks that will change by the weekend.

“Even before the pandemic people were forgetting about the downtown area,” he said. “So the fact that now people realize it could go away someday, they want give it the attention it deserves.”

That’s good news for Dalia Saucedo, who came across Monday morning for her first shopping trip since March 2020.

“I went directly to the store here, and I realized that it’s not a shop anymore,” she said. “That was a rather unpleasant surprise.”

She was disappointed that one of her favorite stores had closed during the pandemic while Mexican shoppers were unable to cross. But that didn’t dampen her spirits too much, especially after she ran into a friend she hadn’t seen since the start of the pandemic.

“I saw my good friend, who I met when we both used to cross the border frequently around the same time. I just ran into her again,” she said. “And it made me really happy to see her.”

Sauceda said she planned to spend the day exploring other stores, picking up groceries and returning to what was a way of life before the pandemic.