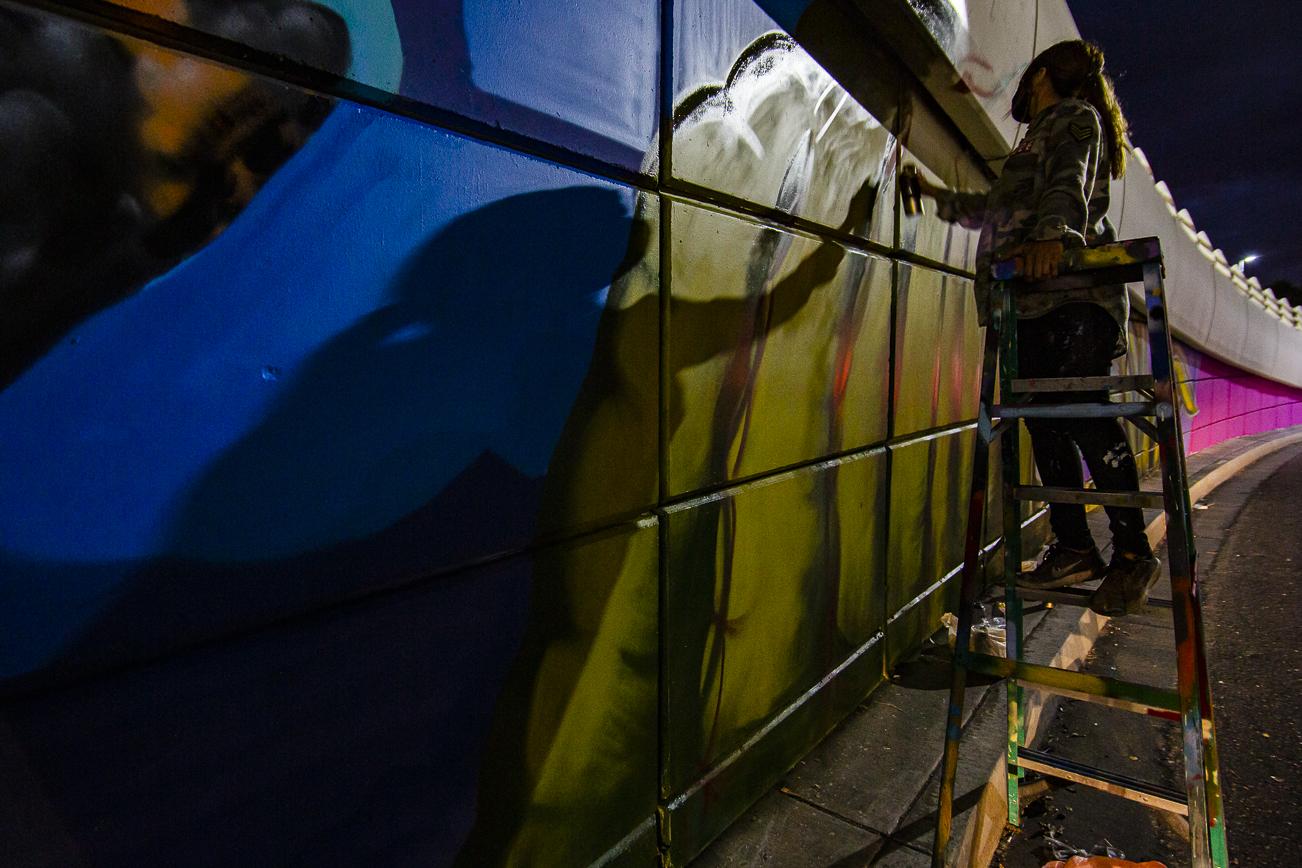 Murphy Woodhouse/KJZZ
Lucy Aguirre uses a ladder to reach the top of her larger-than-life cactus, part of a major new mural in downtown Hermosillo.

With each short burst from her spray paint can, Hermosillo jack-of-all-trades artist Lucy Aguirre was adding a little color and detail to a much-larger-than-life cactus on a recent weekday at sunset.

“Just here fighting the wind a bit. It’s carrying away half my paint,” she said, adding that despite the challenge it was going well.

To reach the top of her creation, Aguirre needs a ladder. But as big as it is, it’s at the tail end of an overpass wall in downtown Hermosillo some 20 feet at its tallest section. There, a nearly finished gargantuan rattlesnake is coiled to strike behind a flowering prickly pear, taller than many regional trees.

As she and her fellow artists were working, hundreds of motorists passed by on the busy thoroughfare, some shouting or honking their appreciation.

“What motivates me most is just that: people going about their daily lives, maybe on autopilot, and then suddenly,” she said. “You turn and get an explosion of color, a wall that’s saying something to you.”

Aguirre is one of a number of members of Sangre del Desierto, or Desert Blood, a relatively new collective of artists, designers, architects and other creative types behind the overpass and several other similarly ambitious projects. 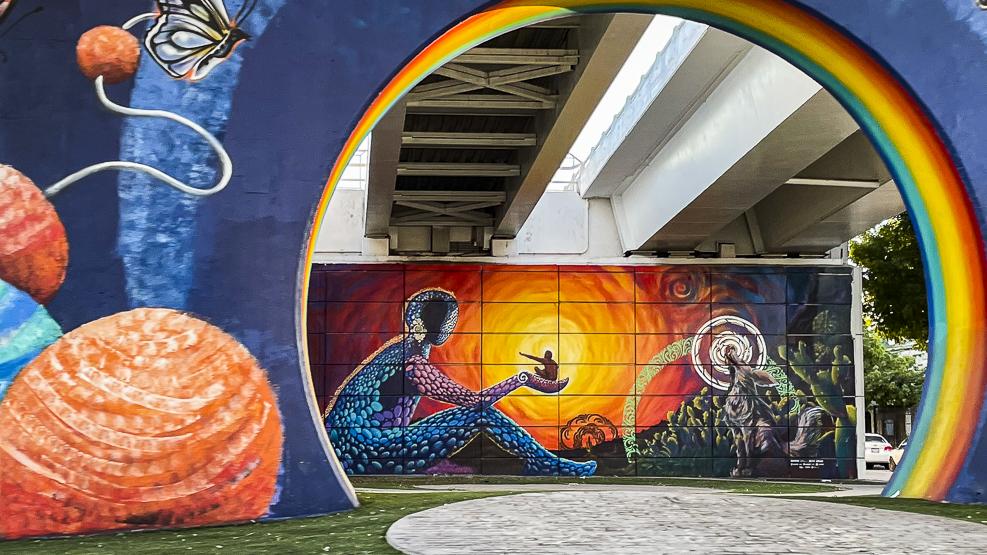 Murphy Woodhouse/KJZZ
Sangre del Desierto was behind a major mural project beneath the Bulevar Morelos bridge.

The main goal of the effort, said collective manager Juan Pablo Felix, is simply to make the city a little prettier, to colorfully reclaim some of its grayer, more neglected public spaces. But also to make art available to anyone passing by, without “paying to get into a museum,” he said.

The group has received support from businesses and foundations to cover costs, but with these massive recent projects, they’ve also gotten formal approval from local officials.

“The truth is, we never expected that the government would become a part of this,” he said, adding that the taboo surrounding graffiti art was an obstacle that needed to be overcome.

A sense of belonging

“The intention of these programs is, on the one hand, to promote local artists, so they have mediums of expression,” said Jose Carrillo, the new head of IMPLAN, Hermosillo’s municipal planning body.

But he added that the city’s effort to support muralists also seeks to “promote identity and a sense of belonging among Hermosillenses.”

As a part of the program, several city departments work together to review and approve proposals from artists, according to Carrillo.

Sangre del Desierto has certainly been among the most active groups taking advantage of those opportunities, he said, but emphasized that the process is open to all, with priority given to local creators. And that the city has many more promising bridges and other public canvases. 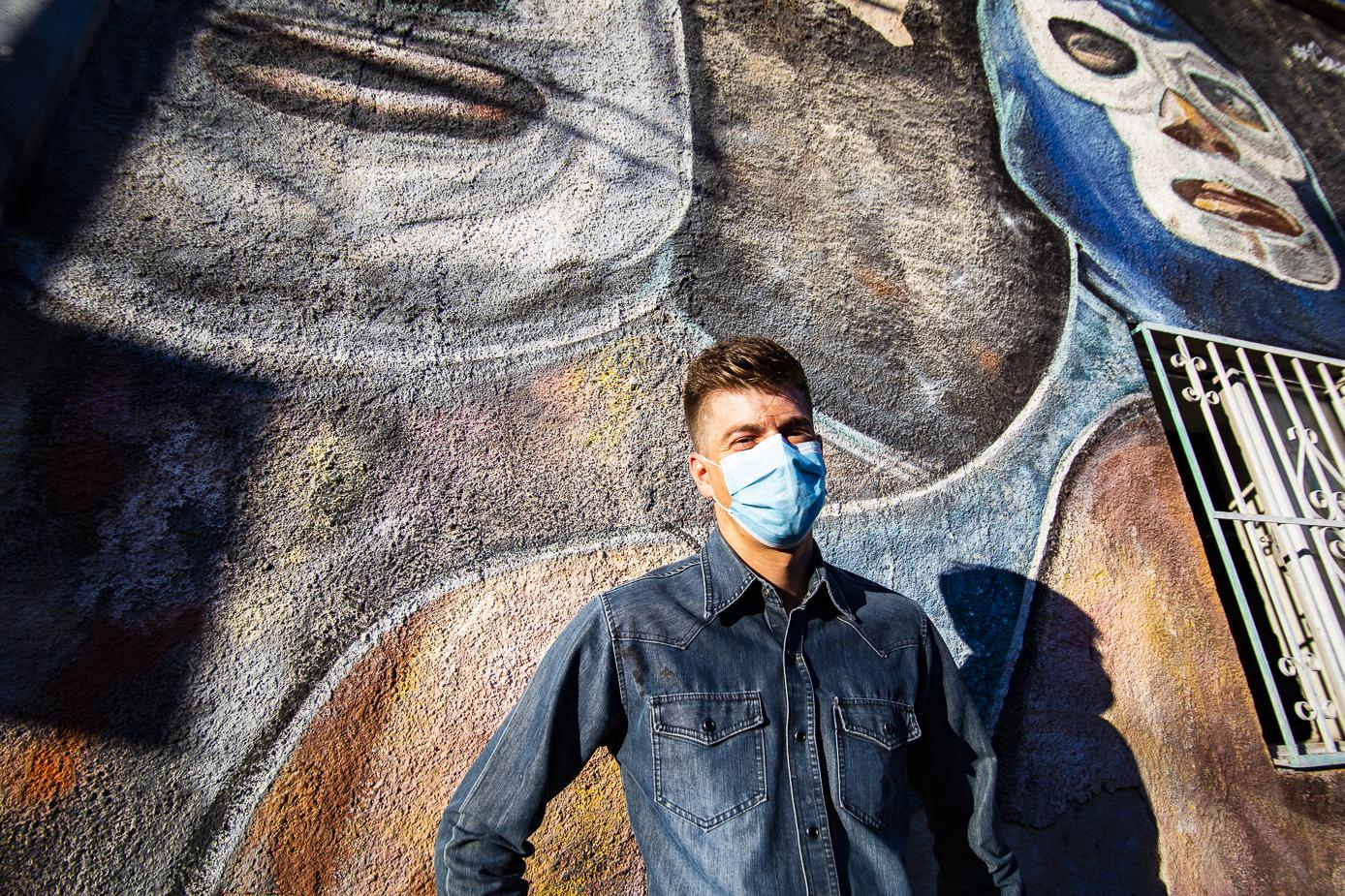 Murphy Woodhouse/KJZZ
Hermosillo street artist Cesar Duarte stands in front of a mural he did with a colleague, which was a part of an earlier mural effort that laid the groundwork for the major recent projects.

Where the wave started

Many involved say it would be difficult to imagine the murals now underway — and the public support they enjoy — if not for an effort several years back near the city’s historic center, backed by the Casa Madrid coffee shop.

At the sharp intersection of Sufragio Efectivo and Obregon avenues, a whimsical mural by Venecia Lopez of three children swimming underwater, seemingly staring out at passersby through a vast pool’s glass wall, covers the rounded end of an aging building.

“Pretty much right here was the start, the mural by Venecia,” said Cesar Duarte, a longtime Hermosillo street artist who was heavily involved.

It was among the very first completed, in the spring of 2016, but dozens were to follow.

As Duarte explained, the goal was very simple: to breathe new life into the long neglected center. But there was some skepticism at first, and even official opposition, in part due to legal protections of some of the center’s historic structures. Duarte acknowledged that some of the murals weren’t done legally.

“At the beginning, it was difficult to understand for everyone,” Duarte said of how the mural project was received. “It was even hard for us to understand what we were doing.”

But as more murals went up, and their impact became clearer, support grew. And by the 22nd mural, according to Duarte, they were able to get right of way permits, and major financial backing from a downtown business association, for a massive bee mural — enough to even rent a crane.

“This is where the wave starts,” he said. “That really impacts society.”

Those impacts, he said, can be seen not just in the massive murals recently finished, underway or to come, but also in the priority officials now give to public art. The shift is such that he thinks that in the near future, “there won’t be a public space being designed that doesn’t take the artist into consideration.” 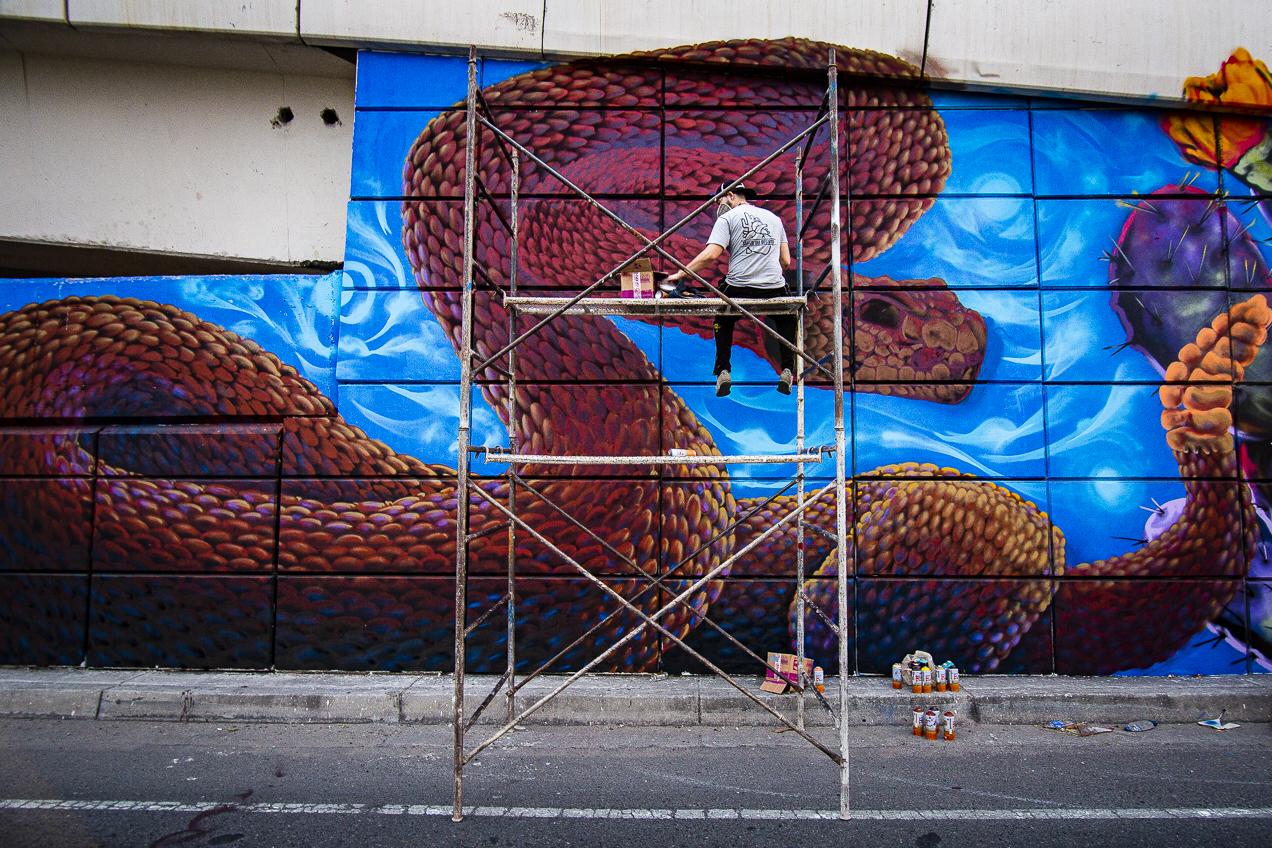 Murphy Woodhouse/KJZZ
Mike Velasco has never undertaken a spray painting project as large as this rattlesnake, but he's pleasantly surprised how it turned out.

Don’t know until you try

Back at the overpass mural, artist and teacher Mike Velasco was putting the finishing touches on the monster rattlesnake.

“This is the first time that I’m doing something so big on my own,” he said.

And it’s been an intimidating undertaking for him: the snake’s scales are the size of his hands. Nevertheless, he said he’s pleasantly surprised by how it’s come out, and others seem to be as well.

You don't know what you’re capable of “until you try,” he said.