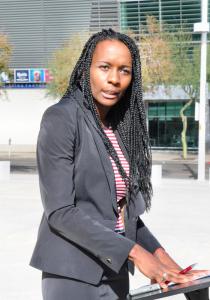 Howard Fischer/Capitol Media Services
Talonya Adams tells reporters on Dec. 9. 2021, that Democratic gubernatorial hopeful Katie Hobbs is a racist and does not deserve to be governor.

Saying her reputation has been damaged, Senate staffer Talonya Adams is taking the first steps Thursday to suing Katie Hobbs.

In preparing a formal notice of claim, Adams said that Hobbs, by her statements and implications, has deliberately given people the impression that she is incompetent. More to the point, she said that Hobbs, who is running for governor, continues to assert that Adams was fired in 2015 for legitimate reasons.

The move comes as Adams held a press conference on the patio of the federal courthouse where a jury last month awarded her $2.75 million in damages for both racial and gender discrimination as well as for retaliation for complaining about her salary being less than white male staffers with similar backgrounds.

That reward, as required by federal law, was reduced to a maximum of $300,000. Now Adams hopes to get a separate jury, this time in state court, to conclude that the statements Hobbs has made were knowingly false. Adams also took the opportunity to say that Hobbs, currently the secretary of state, is unfit to be governor. More to the point, she said that, using a dictionary definition, Hobbs is a racist.

Separately Thursday, Sen. Sally Ann Gonzales (D-Tucson) lashed out at other leaders in the Democratic Party for not being more critical of Hobbs. She said that the latest apology video posted by Hobbs following the jury verdict fell short of actually acknowledging her role in the firing or Adams and instead is designed more to try to undo the damage to Hobbs' political future.

Gonzales also said said she is crafting legislation for the upcoming legislative session that starts next month designed to preclude the kind of discrimination that resulted in Adams being fired and having to sue to get her job back. But she said she does not yet have details to release.

Hobbs has been under fire, not only for her role in firing Adams also but what some see as an incomplete apology. But it is the notice of claim, a formal precursor to filing suit against the government and any of its employees or agents, that actually could do the most damage to Hobbs political future.

That is because each legal maneuver of what is bound to be a public lawsuit will become a reminder to voters of that $2.75 million verdict and the finding of discrimination and retaliation. Adams said she's OK with that.

"She is not fit to serve, not as the governor of the state of Arizona and not as the secretary of state," Adams said.

Adams had been a policy adviser for Senate Democrats when she was fired in February 2015 shortly after Hobbs became Senate minority leader.

Hobbs testified at the federal court trial that she had "lost confidence" in Adams and that Adams, in going to Washington state to be with her son who was in the hospital, had abandoned her job. But a federal court jury concluded that Adams actually was the victim of discrimination. And a second jury found last month that her firing was in retaliation for complaining in the first place about the salary disparity with white male staffers.

Hobbs was not a defendant in the lawsuit which named only the Senate. But Wendy Baldo, who was the chief of staff, testified that the decision to fire Adams was up to Hobbs.

Prior to this week, Hobbs had refused to acknowledge her role in the firing. That led to criticism that she still did not understand what she had done wrong. On Wednesday, she released a video apologizing to Adams and saying she was "truly sorry for the real harm I caused Ms. Adams and her family." Adams was not impressed.

"Her response is a response to a political crisis," she said.

"It is not a response to racism," Adams continued. "Her statement is not an apology."

Adams, who got her job back at the Senate as part of the federal court case, said she has struggled for some time with the question of whether Hobbs is a racist. So she looked up the definition, saying it is defined in a dictionary as "prejudice, discrimination or antagonism directed against someone of a different race, based on the belief that one's own race is superior."

"Yes, she is," Adams concluded.

Most notably, Adams said that Hobbs claimed that one reason for the firing was that she had not been doing her job properly.

Only thing is, Adams said, the state never made such a claim in defending against her lawsuit. In fact, court records show that attorneys for the state admitted that Adams never got a performance evaluation during her employment and that she had no record of discipline.

Adams, who is an attorney, said that Hobbs, in making such statements questioning her professional competence, has damaged her reputation.

By law, the state has 60 days after the notice of claim to either settle the case or reject it. At that point Adams is free to file suit.

What makes that important is that much of the pretrial activity, from various pleadings and motions to taking depositions from witnesses, will be occurring in the months leading up to not just the August primary but the November general election And each new event would only remind the public of the federal court verdicts.

Gonzales, who sat through the second trial, is raising her own issues.

"I find it heartbreaking that no other Democratic senator has taken a public stand," she said. "We either stand against racism, discrimination, retaliation against those who the offender or victim is, or we don't."

But Rebecca Rios, the current Senate minority leader, said that's not necessarily for her to say.

"At the end of the day, this is going to be a choice for the voters to make," said the Phoenix Democrat. Still, Rios acknowledged that Hobbs now needs to make her case.

"She has a lot of making up to do to not only the African-American community but Arizonans in general that are now grappling with the question, 'Is this indicative of this person's personality or beliefs?"' Rios continued. "And that, ultimately, is going to boil down to a decision that the voters make."

Rios pointed out that Hobbs, in her latest apology, promised to hire more minorities in her campaign staff and vowed to take actions if elected governor to ensure the rights of minorities are protected.

"It's ultimately going to depend on where she goes from here," she said. "Is she going to implement and do everything she promised in that video?"

Adams herself, asked about other potential Democratic candidates, suggested Kris Mayes. But Mayes, who is running for attorney general, said she thinks that, as a pro-choice woman, she can do more good as the state's top prosecutor, especially if the U.S. Supreme Court overturns Roe v. Wade and abortion becomes illegal again in Arizona.