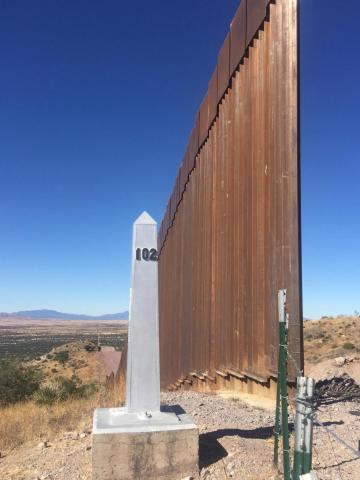 Matthew Nelson
A section of the 30-foot steel bollard wall stands next to a border marker near the Yaqui Ridge Trail.

The Arizona Trail runs from the U.S.-Mexico border into Utah. But its southernmost point has been closed thanks to the Trump administration’s border wall construction. After more than a year of closures, it’s opened to hikers again on Dec. 31, 2021.

Nestled in the Huachuca Mountains, the Yaqui Ridge trail overlooks Mexico. Matthew Nelson with the Arizona Trail Association says it’s a biodiversity goldmine where the Chihuahuan and Sonoran Deserts meet, and a cherished portion of the larger Arizona Trail where hikers either start or end their journeys.

"Beautiful biodiversity of trees, and then it dramatically drives down to the south, leaving the ponderosa pines, leading into juniper and piñon, and eventually like yucca, and agave and grasslands," he said. "Being able to stand on the trail and look out across this vast landscape, it’s this beautiful opportunity to kind of immerse yourself in nature, in the grasslands, borderlands, it’s like nowhere else."

But that hasn’t been possible since the summer of 2020, when border wall contractors began hauling steel and using dynamite to dig into the mountain range.

A lone, 200-foot segment of the steel bollard wall and miles of access roads are there today. Nelson says those changes are hard to stomach, and as the Department of Homeland Security gears up to begin new remediation and construction on certain, unfinished portions of the border in Arizona and other states, he's not sure what efforts will be underway there. But he estimates some 30,000 people would have come to the trail had it not been closed. Seeing it open again feels like the first step to a better future.

All told, the Trump administration built just over 450 miles of wall across the U.S.-Mexico border, including some 230 miles of public land in Arizona. 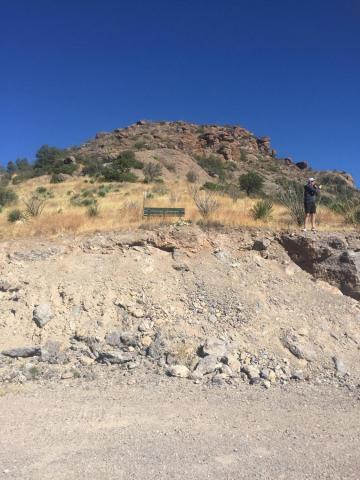 Matthew Nelson
An access road cut a portion of the landscape near the Yaqui Ridge Trail.
Fronteras Immigration Southwest Border