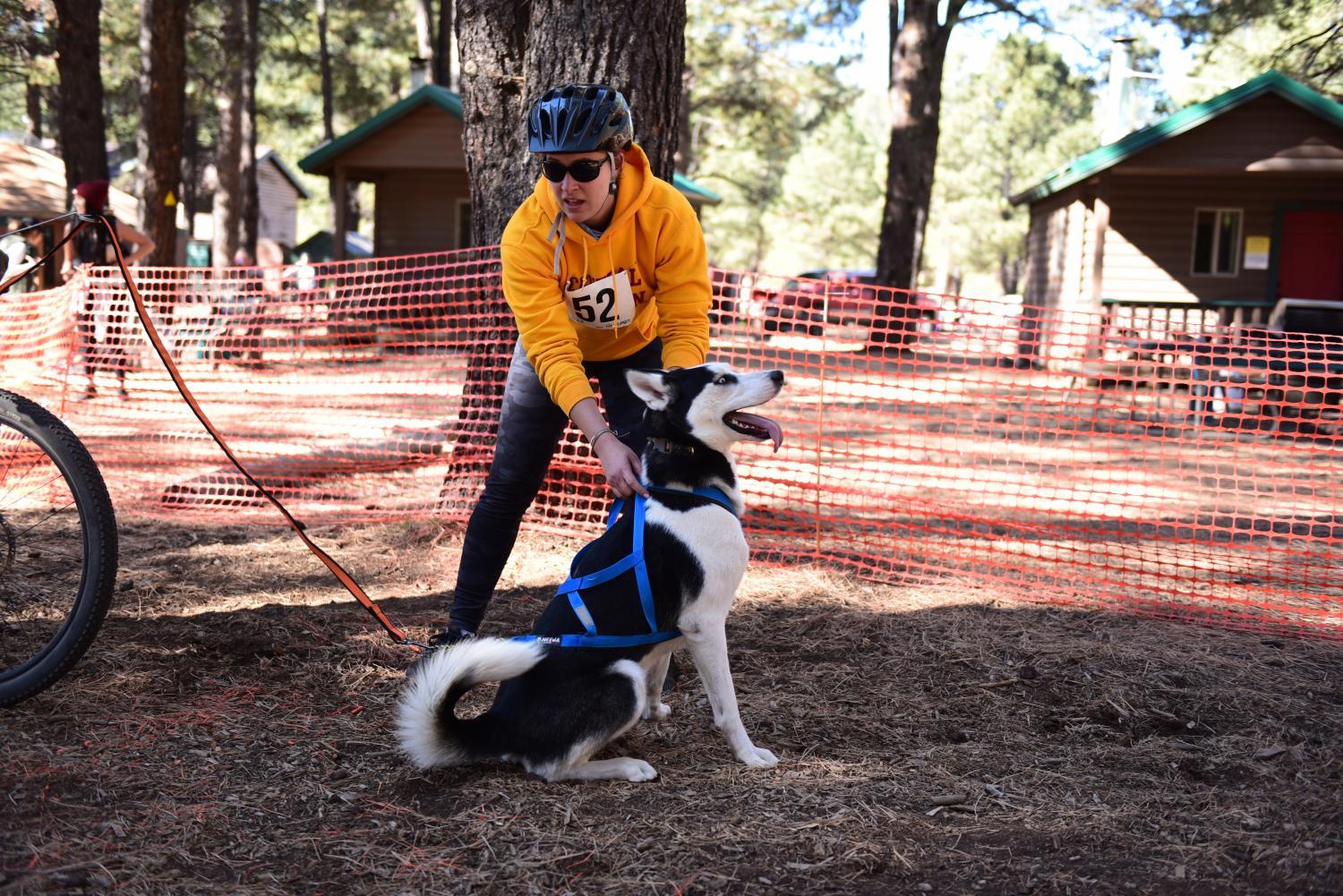 Ron Dungan/KJZZ
In November 2021, a group gathered at Arizona Nordic Village for two days of racing. A dog at the starting line.

In the before times, Flagstaff mushers raced their dogs on sleds, in snow. But dog sledders have shifted gears recently.

In November, a group of racers gathered at Arizona Nordic Village for two days of racing. There was no snow on the ground, just a dusty trail where they lined up in carts or mountain bikes pulled by dogs on harnesses.

"So this is Arizona’s second dry land sled dog race," said Brad Kassing. "We’re out here racing with sled dogs, but without the sleds. We’ve got people on mountain bikes, on scooters, on carts, and we actually have a bunch of people who are just running, and with a sled dog pulling them in a harness."

Kassing took up dryland racing four years ago. He says the reason for changing from snow to dirt is simple: climate change.

"There hasn’t really been consistent snow for at least 10 years to be able to plan a specific weekend for a race," Kassing said. 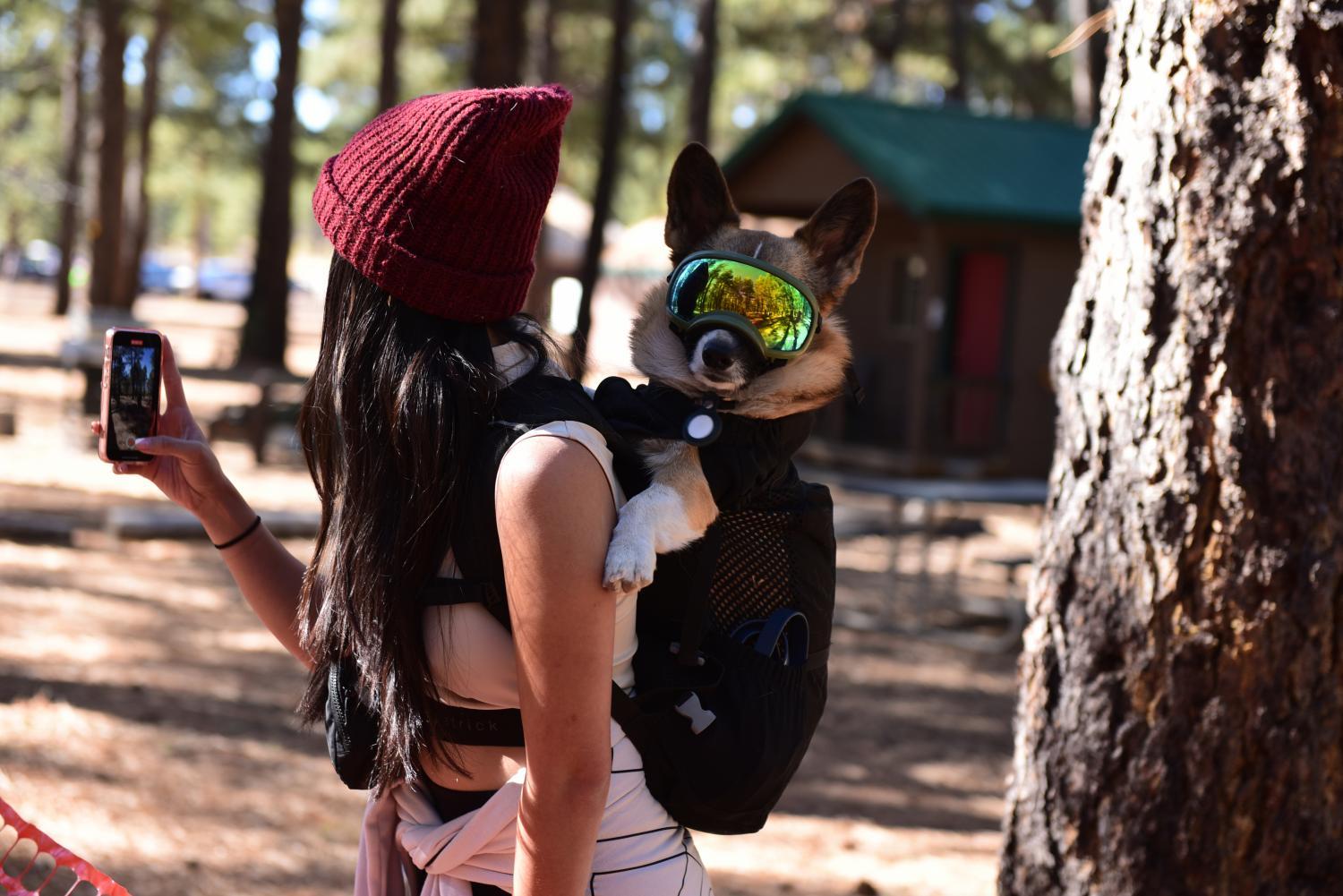 The shift started in Europe, which is also feeling the effects of climate change. Now Americans are starting to take up the sport. Some of the racers are mushers from way back, like Denise Edwards.

“I’ve been running sled dogs for over 30 years. Up here in Flagstaff,” Edwards said.

She’s watched as the sport has adjusted to a world with less snow.

“We used to have one of the best races up here in Flagstaff years ago and we used to have a super one over in Alpine, Arizona,” Edwards said.

Those races drew teams from all over the Southwest.

“There were a lot of big mushers back then. The bigger teams are kind of dwindling now,” she said.

In the mid- to late-90s, she says, Arizona seemed to have longer fire seasons and shorter winters.

“And so a lot more people have been getting into this because all you need are one or two dogs, and that’s manageable. Whereas if you’re a musher like me, this is a way of life,” she said. 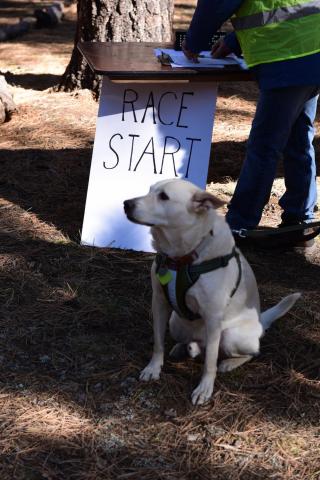 Ron Dungan/KJZZ
A dog greets people at the starting line during a break in the action.

There’s a schedule to follow, and racers take their place as organizers move teams to the starting line. It seems there are dogs everywhere you turn — Kassing estimates there were nearly a hundred on site. The change from snow to dryland has meant a shift from huskies to other breeds. There are a number of German shorthaired pointers, for example, like the pair that Jessica Wegner brought from Boulder, Colorado.

“I have not, thus far, have not found a dog sport that I enjoy more than this. It’s my happy place and my favorite way to engage with my dogs,” Wegner said.

German shorthairs are hunting dogs. They also make good house dogs, though it’s important for them to get enough exercise. Otherwise?

“They’re menaces. If we don’t tire them out they are complete menaces," Wegner said.

She races on a mountain bike. A harness and a few other items are required, but she says there is not a lot of gear involved.

“You just want to make sure you have good brakes. That’s honestly the most important thing," she said.

It was sunny and mild during the two-day event. Flagstaff has had snow since then, but it’s unclear what the long-term outlook is for this winter.

Each team was timed as it went around the course. Nobody seemed too caught up in winning, at least not in the early rounds. In this sport, Edwards says, it’s all about the running.

"So it’s basically you do it for love of dogs, love of the sport, and you just do it because you love spending time with your dogs," Edwards said.

Global warming has brought many changes, with more likely on the way. For, now, these dryland racers are making the most of it. 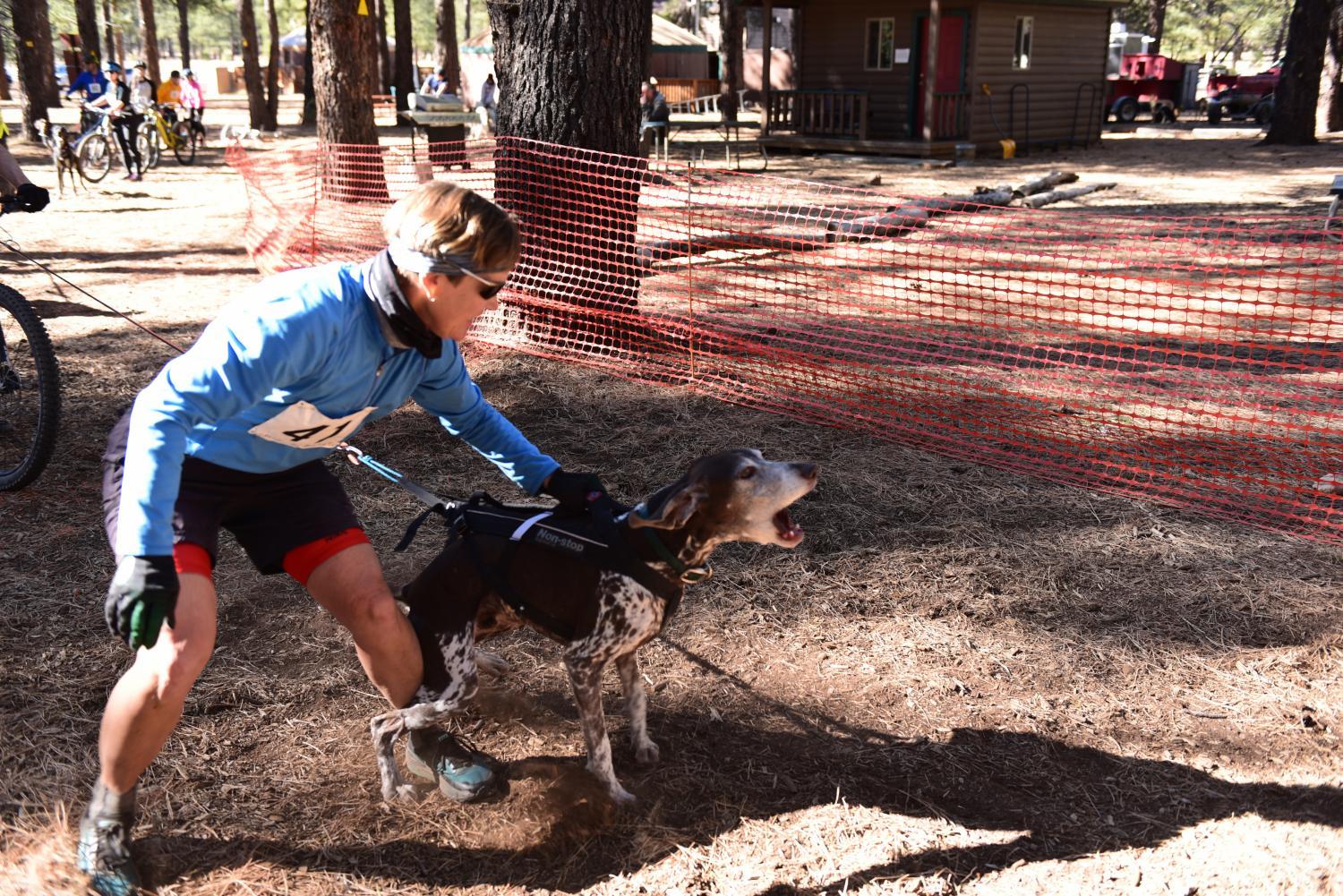 Ron Dungan/KJZZ
A dog at the starting line is excited to get racing.