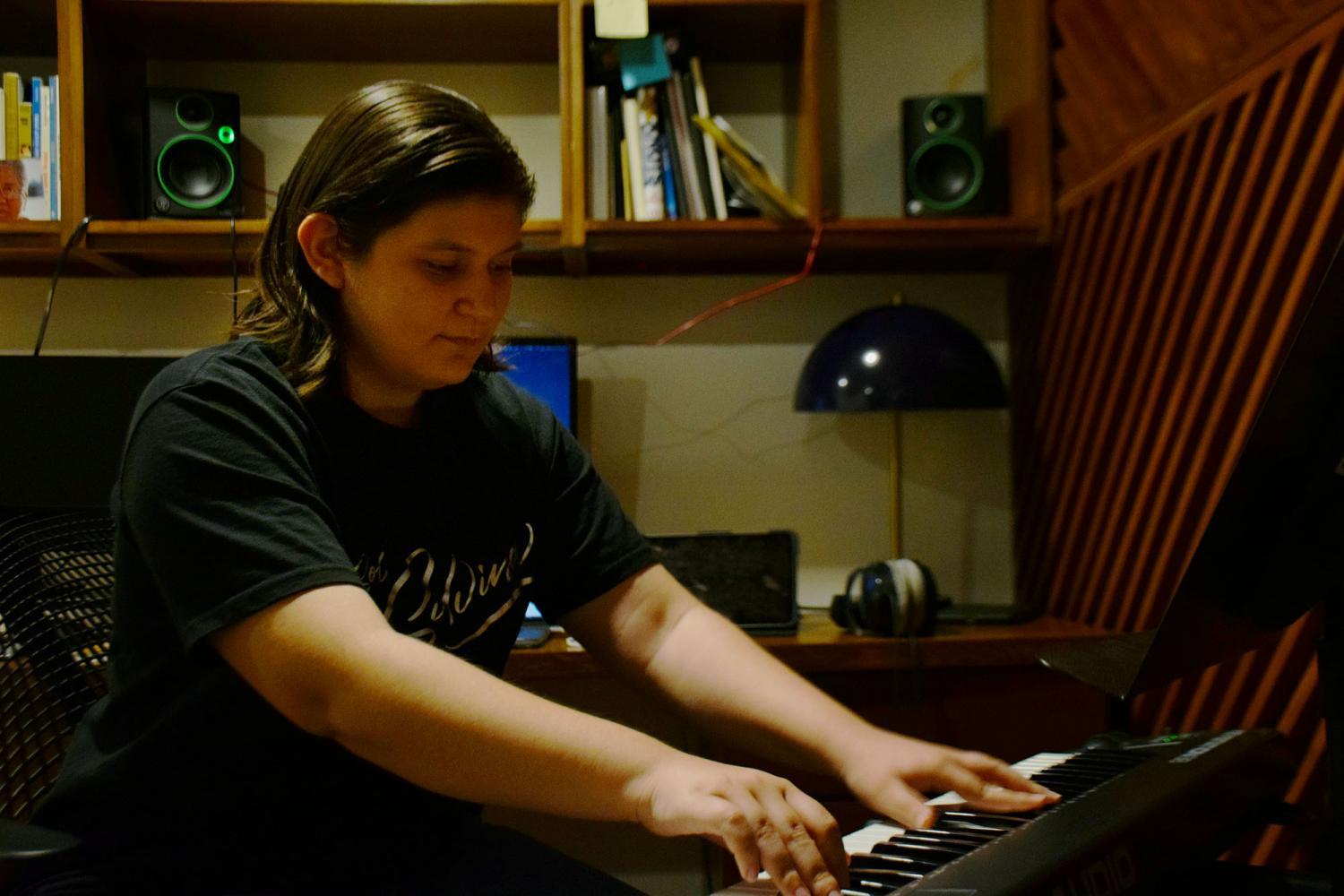 There’s a saying about Sonora.

“As a musician, I hear it all the time,” said David Vega. “Sonora: where art ends and carne asada begins.”

But a rising star from Hermosillo is changing that narrative.

Last summer, the symphonic orchestra in the central Mexican state of Puebla played the world premiere of Sol Silvina’s seven-part suite “My World.”

The 16-year-old from Hermosillo is just getting her start in the world of composing. But she believes you’ll be hearing a lot more of her music — and soon.

“My main goal is being a film composer,” she said. “Making the soundtracks for big films, and winning Oscars.”

The quiet teen has reason to be confident. Her music has been played by orchestras from Greece to Bulgaria, and studying composition at a leading conservatory. 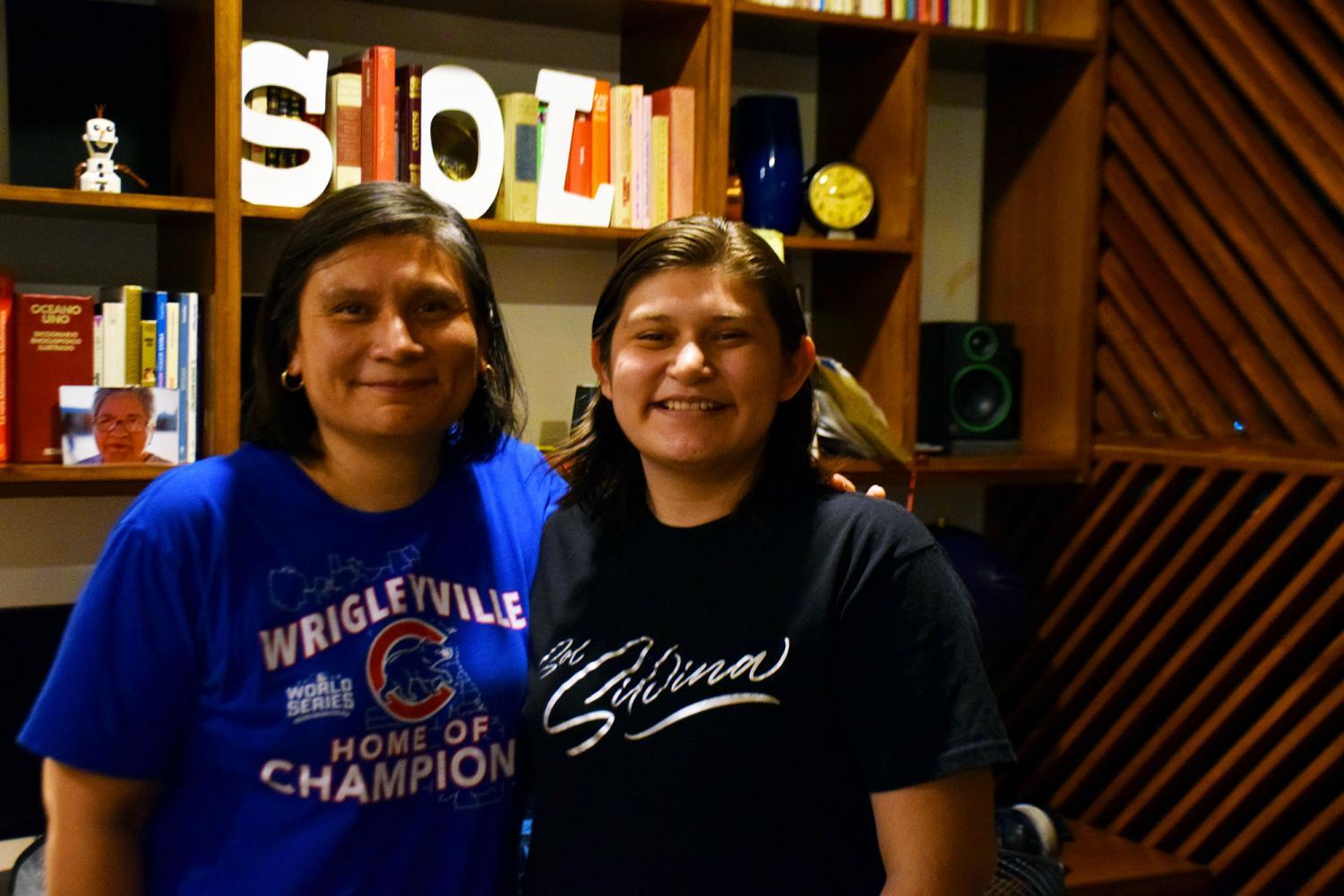 Kendal Blust/KJZZ
Sol Silvina (right) with her mom in their Hermosillo home in October 2021.

“There were so many possibilities for her, but she has surpassed all of my expectation,” said Vega, Sol’s first music teacher.

Vega has known she had musical talent since she picked up a recorder in her elementary school music class at age 9, he said. She was so far ahead of her peers, he started giving her piano lessons on the side.

Then, Sol became seriously ill and her mother decided to homeschool her. He asked to continue teaching her in his time off.

“I told her mom, ‘Excuse my forwardness, but I’d like to give her classes. I know she’s going to be great someday, and I want to be a part of that,’” he said.

Within months, she’d surpassed his skills on the piano. And she was hooked.

“I kind of felt that spark, you know,” she said. “I progressed so quickly that I really enjoyed it.”

Sol sometimes worked with teachers, but often learned on her own.

In 2020, at 14, she graduated from high school, and that fall made her debut as a piano soloist with the symphonic orchestra in Puebla, playing Joseph Haydn’s "Concerto No. 11 in D major."

By then, though, her interest was already shifting from performing to composing, with dreams of working on big Hollywood productions and films by her favorite director, Guillermo del Toro.

“Music helps bring the film to life. It helps people connect to the film better,” she said. “I feel like this way I can express myself more. Like I have the freedom of being able to create the stories or the images and transmit that to other people.”

“She is a diamond,” said Alonso Lopez, a cellist with the Sonoran Philharmonic orchestra in Hermosillo. “For me it’s an honor to participate with her in her projects.”

Lopez has recorded several of Sol’s works and arrangements — like her version of "Peponi" by The Piano Guys for cello and piano.

“And I was really shocked,” he said. “She writes the cello part like she was a full composer with 50 years of experience or something.”

Sol’s work is that of a much more experienced composer, he said. And he believes her success will open doors for other Sonoran musicians, especially since she was accepted last year to a prestigious music school in Paris.

“I am more than proud of her. She inspires me in my music. I feel like I want to make her proud,” he said. “And it makes me so happy that Sol is taking the name of Sonora, the name of Hermosillo to Paris, and to the world.”

He said Sol is countering that carne asada narrative, both at home and abroad. 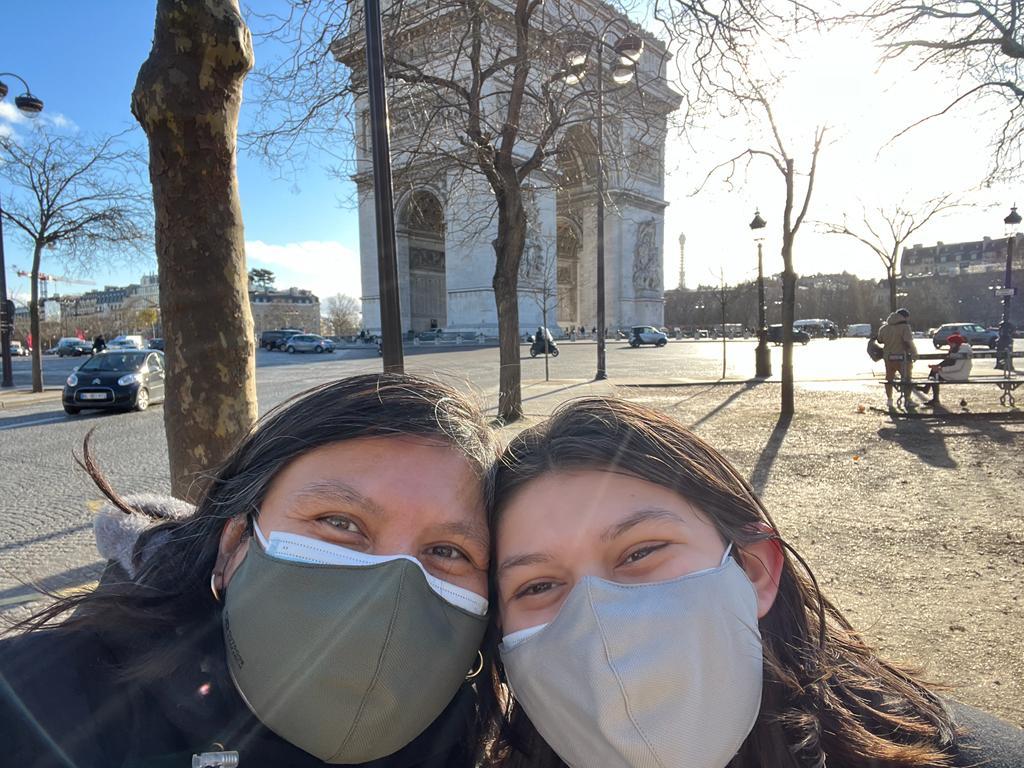 Sol Agramont
Sol Silvina (right) with her mother Sol Agramont in front of the Arc de Triomphe in Paris in November 2021.

After more than a year of studying virtually from Hermosillo, Sol is now taking in-person classes École Normale de Musique de Paris-Alfred Cortot, where music constantly rings through the hallways.

“It’s so exciting to finally be here in person and meet my teachers and everyone,” Sol said. “It’s been amazing.”

She arrived at the end of last year, accompanied by her mother and grandmother.

“They’re the ones that are supporting me throughout everything. I mean, they’ve sold everything they own,” she said.

The family sold their home and left behind everything — and everyone — that couldn’t fit in a single suitcase apiece. But Sol’s mom, Sol Agramont, says she wouldn’t have it any other way.

She always believed her daughter’s talents would take her anywhere, she said, and without conservatoires of that caliber in Sonora, “we had to move anyway. It was like, to the southern part of the country or someplace else. And she’s decided to go very far away. It’s tough, but it’s great, and we’re so excited.”

Her family’s dedication inspired Sol’s first orchestral pieces, including “Moving On” about Agramont, which became part of the 22-minute suite played by the orchestra in Puebla.

For now, Sol is honing her skills and working toward a doctoral degree in orchestration and composition for film.

“At this point music isn’t just what I like to do. It’s been a part of who I am,” she said.

Some day, she hopes that music will make it to the big screen. But she’s taking it one step at a time, she said. “First Paris, and then Hollywood.” 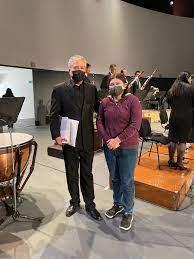 Sol Agramont
Sol Silvina poses with Ludwig Carrasco, the director of the symphonic orchestra in Puebla, Mexico, ahead of the premier of her suite "My World," in July 2021. 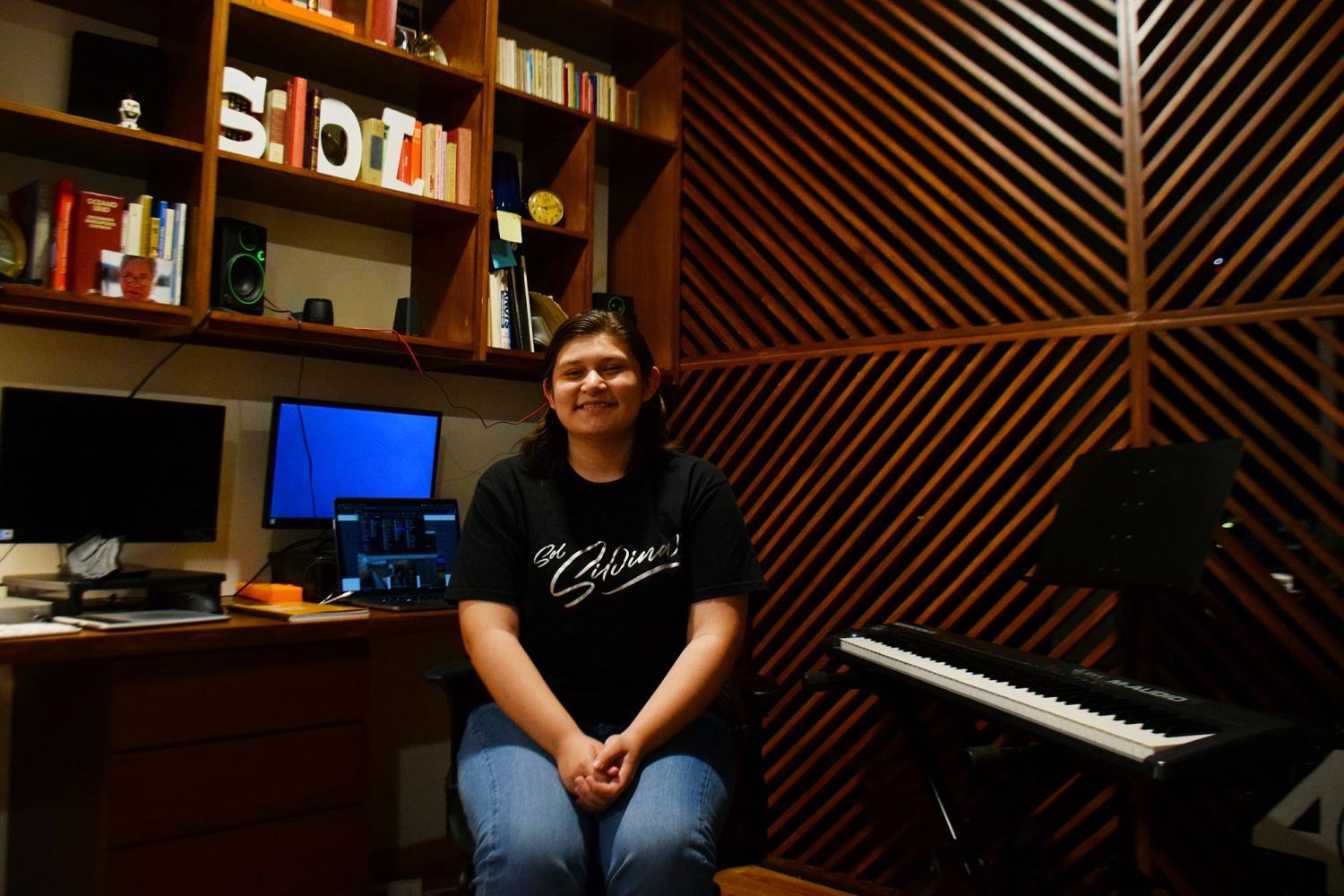 Kendal Blust/KJZZ
Sol Silvina plays piano and writes music in a small office in her family's home in Hermosillo, Sonora, as she prepares to move to Paris to study film composition. 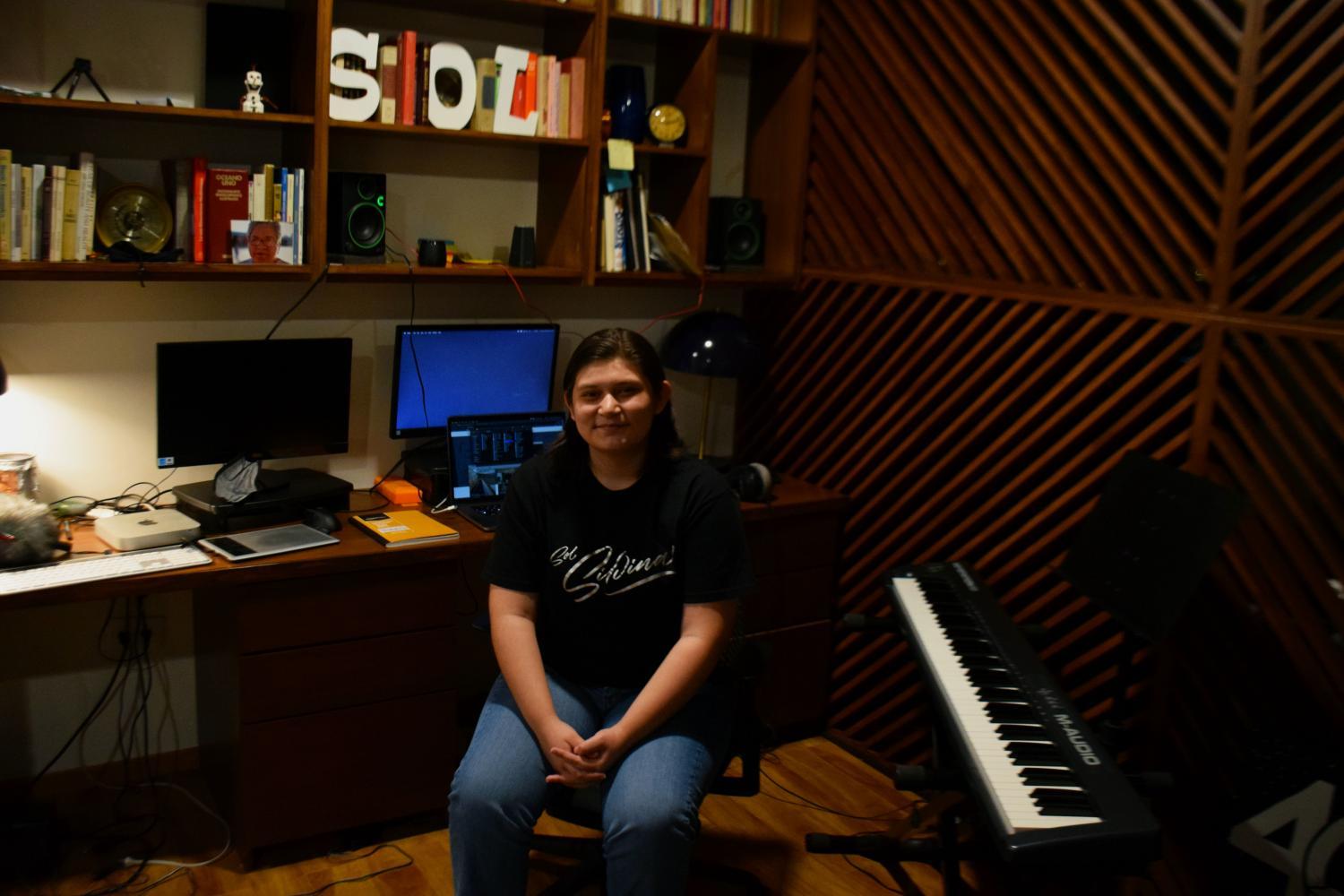