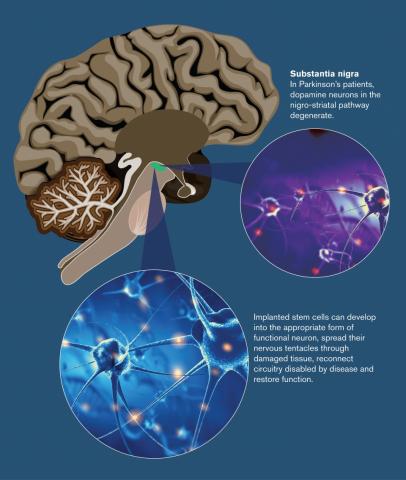 Shireen Dooling/ASU
Artist's conception of the implanting of stem cells in a region of the brain known as the substantia nigra.

Parkinson’s disease is a brain disorder that can cause tremors, movement difficulties and dementia. ASU’s Biodesign Institute has received $5.2 million from the Michael J. Fox Foundation to explore three potential treatments.

“There are also other aspects involved, such as REM sleep disorders and depression and apathy and pain. And we modestly can modify some of those, and some of those not at all. So those are the areas where we need more help: the nonmotor features,” he said.

One project will entail grafting new dopamine-making nerve cells into affected areas. The neurons will consist of blood cells chemically reverted to stem cells, then influenced to begin a new life as nerves.

For his proof-of-concept, Kordower wanted to narrow the playing field, so he chose a disease subtype limited to a specific brain area and moderated by dopamine. The study will therefore recruit a specific patient subpopulation with mutations in the parkin gene, which studies also link to early-onset Parkinson’s disease.

“If we can’t cure or treat those patients with stem cell transplants, we're not going to really be able to help any patients with Parkinson's disease,” he said.

The second project will use a mitosis-preventing protein to convert structural cells called astrocytes into dopamine-making neurons, which will then grow into their proper places.

“When I saw this presented at a meeting, I thought this was insane. Unbelievable that this could work. And it worked on every single test in every single way. And so I asked the group to collaborate,” said Kordower. 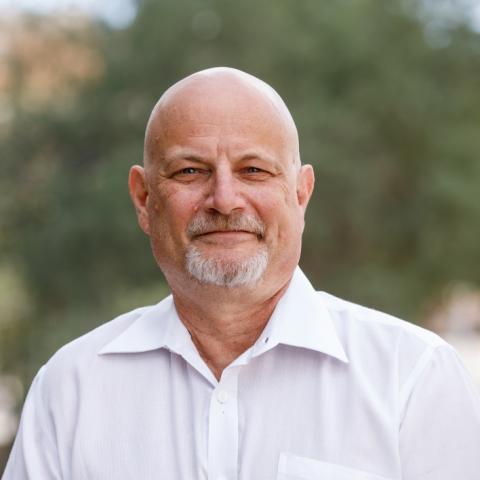 A third project will try to rid cells of a harmful, misfolded version of a protein called alpha-synuclein.

“We believe that's where the dementia component comes in, in patients with Parkinson's disease. And if we can stop the progression of this pathology from entering the cortex, that could be a big game changer,” said Kordower.

Alpha-synuclein plays important, though not fully understood, functions in the nervous system. The trouble begins when there’s too little or too much, or if it folds into a harmful shape. Experts believe Lewy body dementia, the second most common progressive dementia type after Alzheimer's disease, arises from abnormal alpha-synuclein deposits in the brain.

“I will be making a big effort to recruit experts in Lewy body dementia to my center, and to have a section of the center devoted to that. Because I think it's a major unmet need. There's nothing we can do for these people at present,” said Kordower.

As misfolded alpha-synuclein spreads, it can wreak havoc on the cerebral cortex, which controls functions ranging from information processing to perception and language,

“If we can prevent the spread of alpha-synuclein to the cortex, to the top of the brain, we should be able to have a major impact on cognition,” he said.

Kordower says his approach differs from that of many biotech companies, which he says use antibodies to grab the tiny amounts of alpha-synuclein found outside of cells. His approach works inside the cell, employing an antibody custodian to drag pathological alpha-synuclein to a structure called the proteasome, which breaks down unneeded proteins.

“The proteasome is sort of like a garbage disposal that will clear this bad protein and basically flush it down the drain.”

Kordower encourages patients with Parkinson's disease to ask their doctors about clinical trials relevant to their needs.

“Most clinical trials fail to enroll a single patient. So I'm hoping this report by you will encourage patients with Parkinson's disease to speak to their physicians and see whether there are clinical trials that might be good for them. Because that'll help everybody.”