Last week,  Scottsdale Arts hosted an opening reception for an exhibition called, “What Makes Me Me.” It featured self-portraits of 35 artists living with intellectual and developmental disabilities.

It was a big day for Amy Herrgesell and her parents, Steve and Mary Lou Herrgesell.

"Amy, how did you do this part? Did you have a brush?" Mary Lou asked her daughter as they look at her self-portrait hanging on a wall inside a gallery at Scottsdale Art. "Ah, very carefully. Very carefully. That's a beautiful job!"

Amy’s self-portrait is a vibrant mix of yellow, red, pink and blue watercolor and solid tempera on a large piece of paper. She’s depicted in her wheelchair, and although her face lacks features, you can feel her gaze.

"It's like the sky, right? Gorgeous. We’re so proud of you, Amy," said Mary Lou. 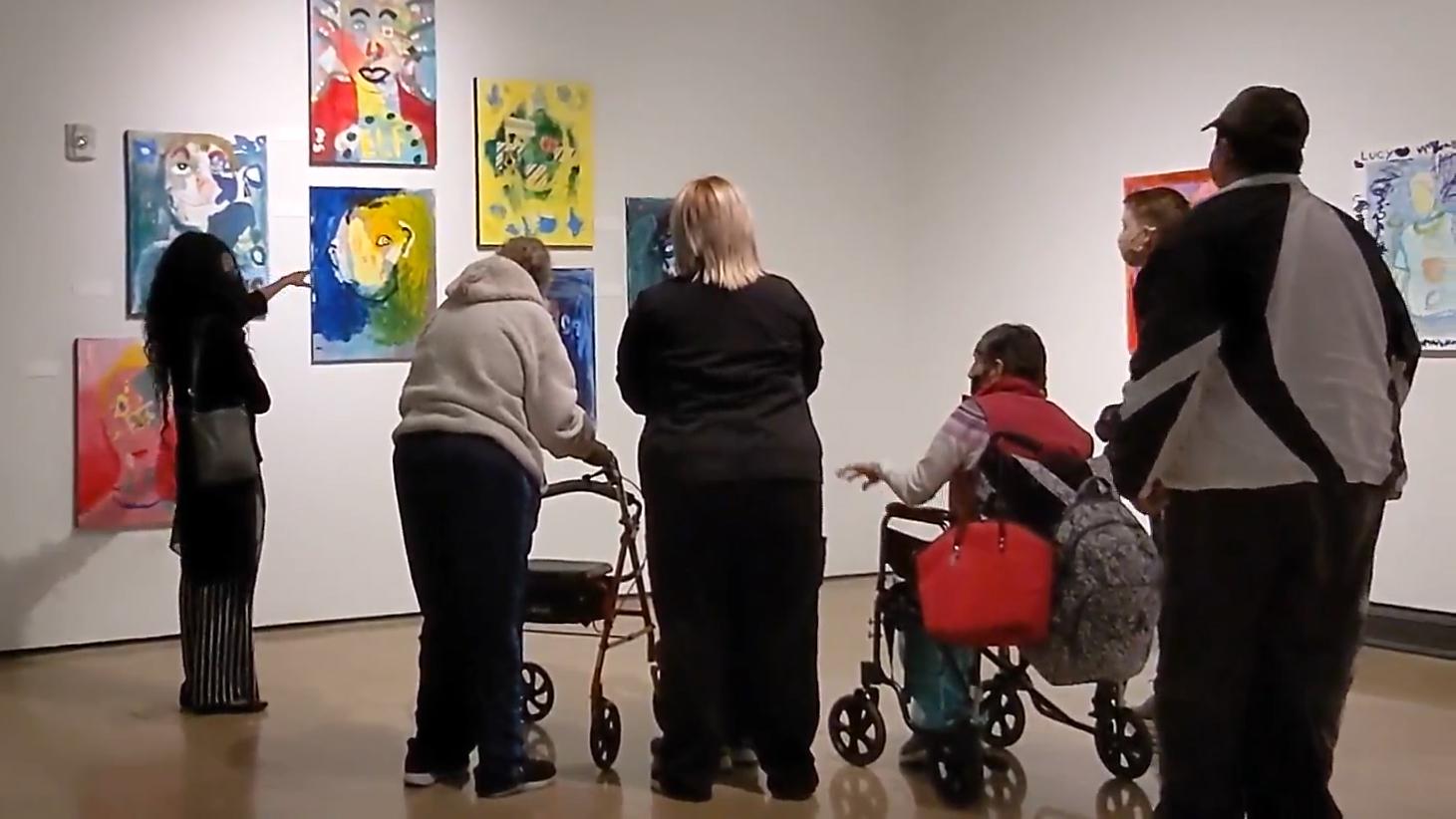 Sky Schaudt/KJZZ
Fine artist Tiesha Harrison (left), a painting instructor for "What Makes Me Me," talks about artwork with exhibit attendees on Feb. 22, 2022.

I asked Amy about her piece.

"Amy, are you excited to see the artwork on the wall?

She didn’t feel like talking. With so much activity, Amy was feeling a bit overwhelmed.

"Were you excited?" asked Mary Lou.

Amy is 47 and has a severe kind of seizure disorder.

"It happens with no warning," said Mary Lou. "She'll drop. She'll be walking along, and she'll just drop. It's called Lennox-Gastaut."

And it means Amy requires 24-hour supervision. So, she lives at home with her 74-year-old mother and 73-year-old father. But today, Amy is being celebrated as an artist and a daughter. 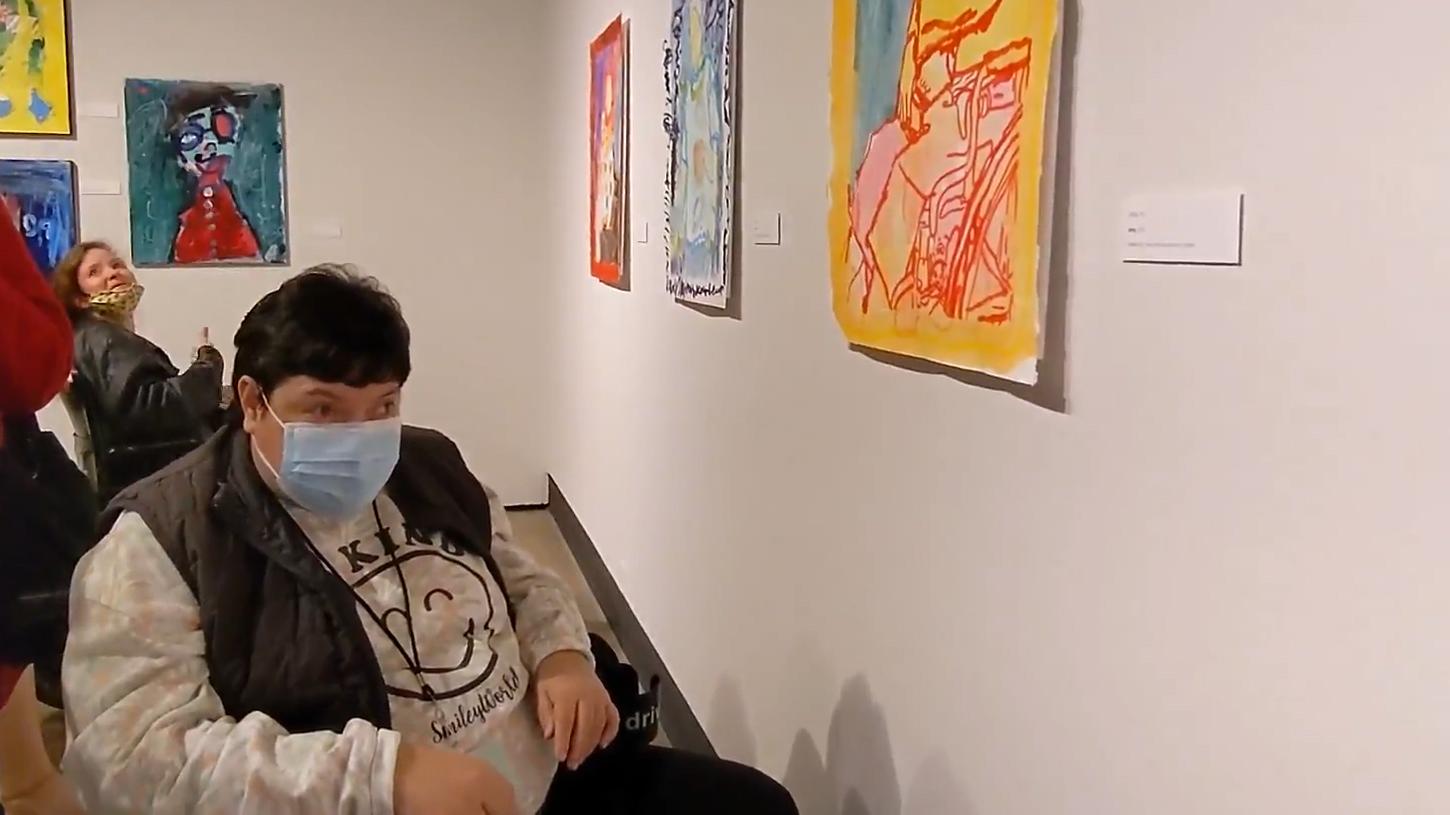 "When she gets frustrated, sometimes she'll use the phrase, “I'm doing the best that I can.” And she is, you know, she really is," said Amy's father, Steve.

Taylor Buttrey is the director of development with the Opportunity Tree, an organization that supports people with intellectual and developmental disabilities, known as IDD. His organization was one of two adult day programs that partnered with Scottsdale Arts on the exhibition.

He says one of the goals behind “What Makes Me Me” is to empower artists like Amy.

"There's kind of a shift going on with this population of the caregiver mentality versus the empowerment mentality," he said.

Meaning, some individuals with an intellectual or developmental disability have relied on someone else to meet their daily needs. Buttrey says a creative arts program like this one can really boost a person’s confidence while giving them the tools to tell their own story.

"So, as far as the exhibition itself, the more broader themes there are self expression, self advocacy to the community at large," said Buttrey. 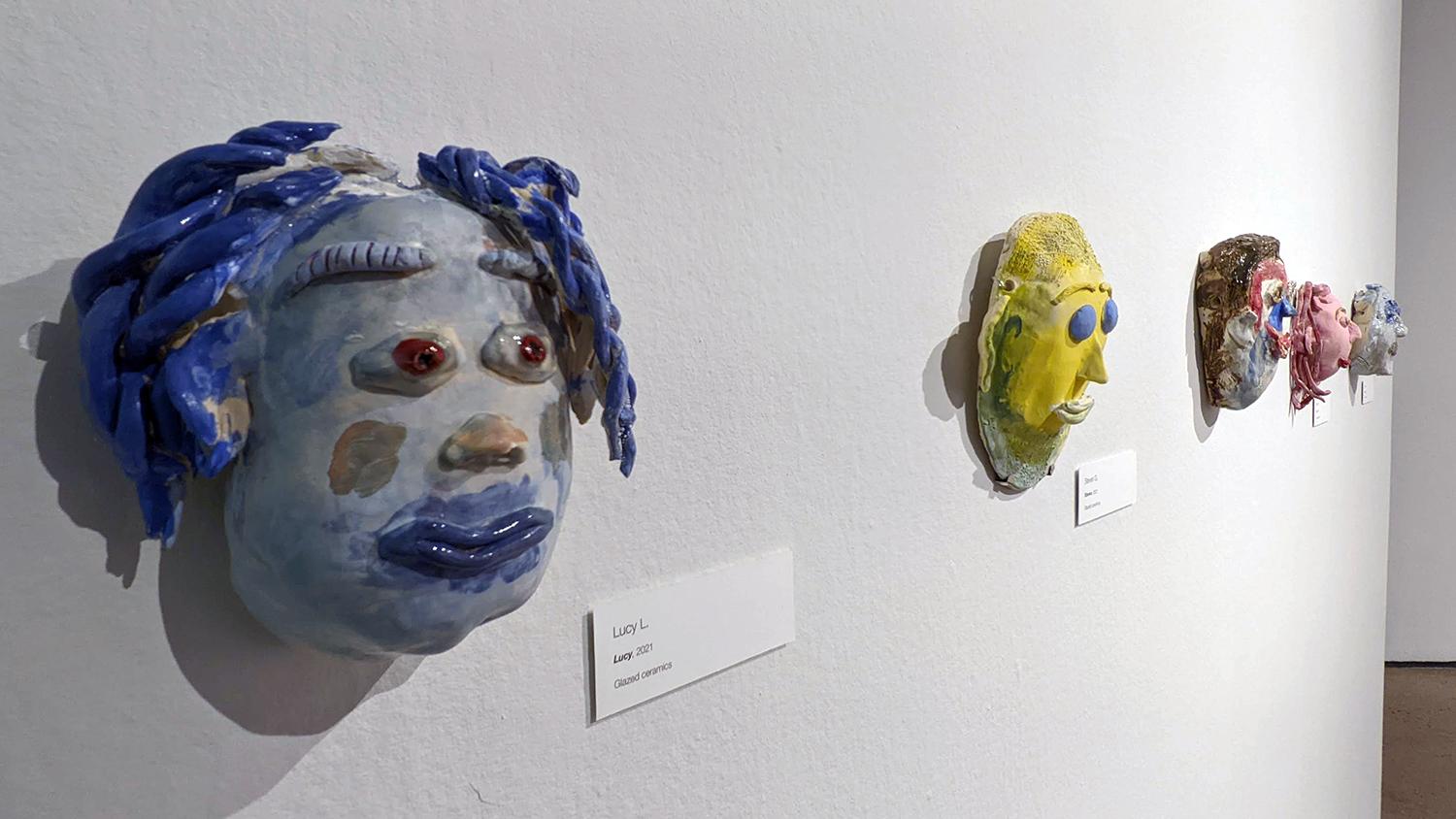 Sky Schaudt/KJZZ
“What Makes Me Me” artists used different mediums, such as clay and watercolor.

And for Buttrey, that’s hugely important because people with intellectual and developmental disabilities are living longer. In fact, as the disability advocacy group the Arc states in its aging position statement: "For the first time in history, Americans living in the 21st century will experience millions of people with intellectual and/or developmental disabilities living into their 'senior' years."

Which means learning how to be your own advocate, if possible. Because as it stands, many community-based groups and medical providers are not prepared to meet the needs of aging individuals with IDD. It also means family caregivers, like Steve and Mary Lou, may pass away before their daughter.

"I'm just worried any day, anything can happen to one of us," said Mary Lou. "We've already had health issues."

I asked her what would it would mean for Amy if anything did happen to her parents.

"Well, my son would step in. But you know, he has his own life. And we've never wanted to burden him with it. But he would be there for her, if need be. But that I don't really see that as the solution. I would like her to be settled somewhere where I know she's safe and happy," she said.

So, Steve and Mary Lou Herrgesell continue to look for just the right place for Amy. 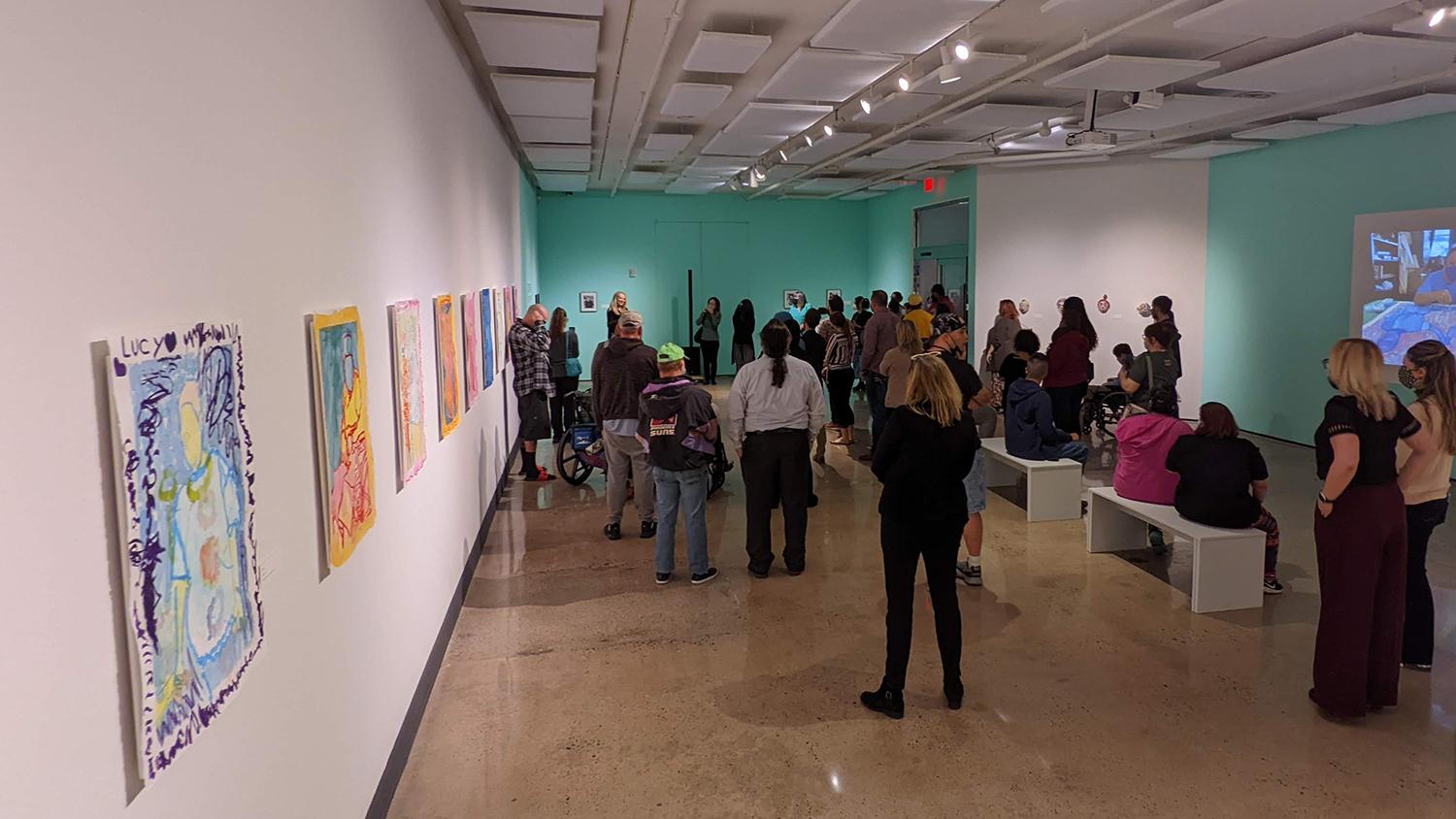 Sky Schaudt/KJZZ
Scottsdale Arts hosted an opening reception for an exhibition called “What Makes Me Me" on Feb. 22, 2022.

Laura Hales is the curator of learning and innovation at Scottsdale Arts. She curated “What Makes Me Me.” The program led workshops leading up to the exhibition.

"And so each member got a white piece of paper with their silhouette, you know, just lightly sketched, they did absolutely everything else on their own," she said.

The artists used different mediums, such as clay and watercolor.

Hale said Amy’s piece took her two sessions to complete the outline of her body and wheelchair.

"Because she was just very methodical, slow, but she wanted to get everything just right, so I think there’s a little perfectionist streak in Amy," she said.

But as she progressed, Amy seemed to find her rhythm. 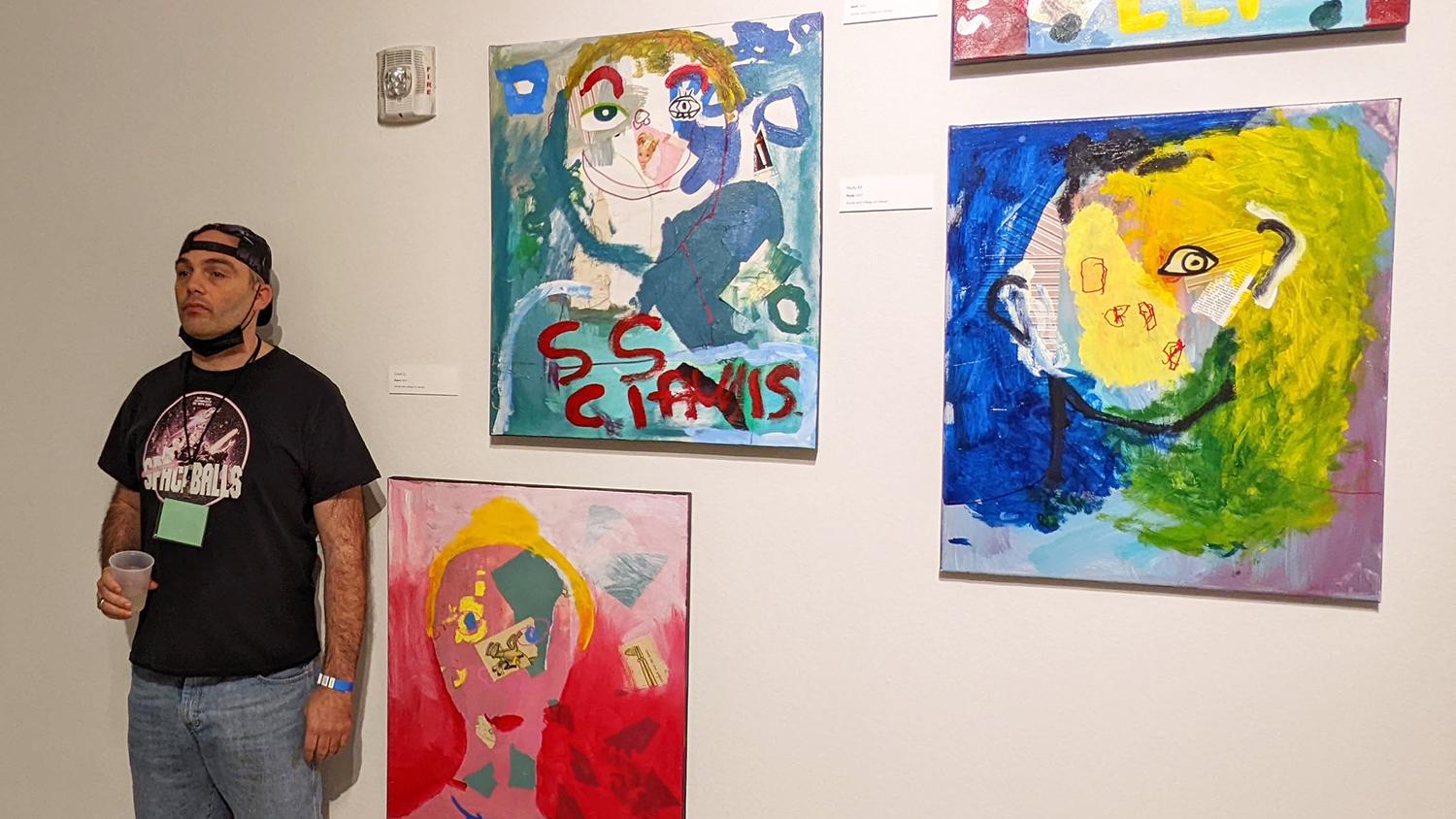 Sky Schaudt/KJZZ
An artists stands with portraits at the "What Makes Me Me" exhibit on Feb. 22, 2022, at Center Space gallery at Scottsdale Center for the Performing Arts in downtown Scottsdale.

"We would guide her hand and towards the end, she really took to it so well. And she was just drawing independently by herself," she said. "Not sure what the reason is for that. But it was just astounding."

Staring at Amy’s self-portrait and hearing Hales talk about her process, it seems clear Amy was communicating something about herself. And hopefully by showcasing more works by people with intellectual or developmental disabilities, like Amy, we will learn to slow down and tune in to what they have to say.

"What Makes Me Me" runs through May 2 at Center Space gallery at Scottsdale Center for the Performing Arts in downtown Scottsdale.