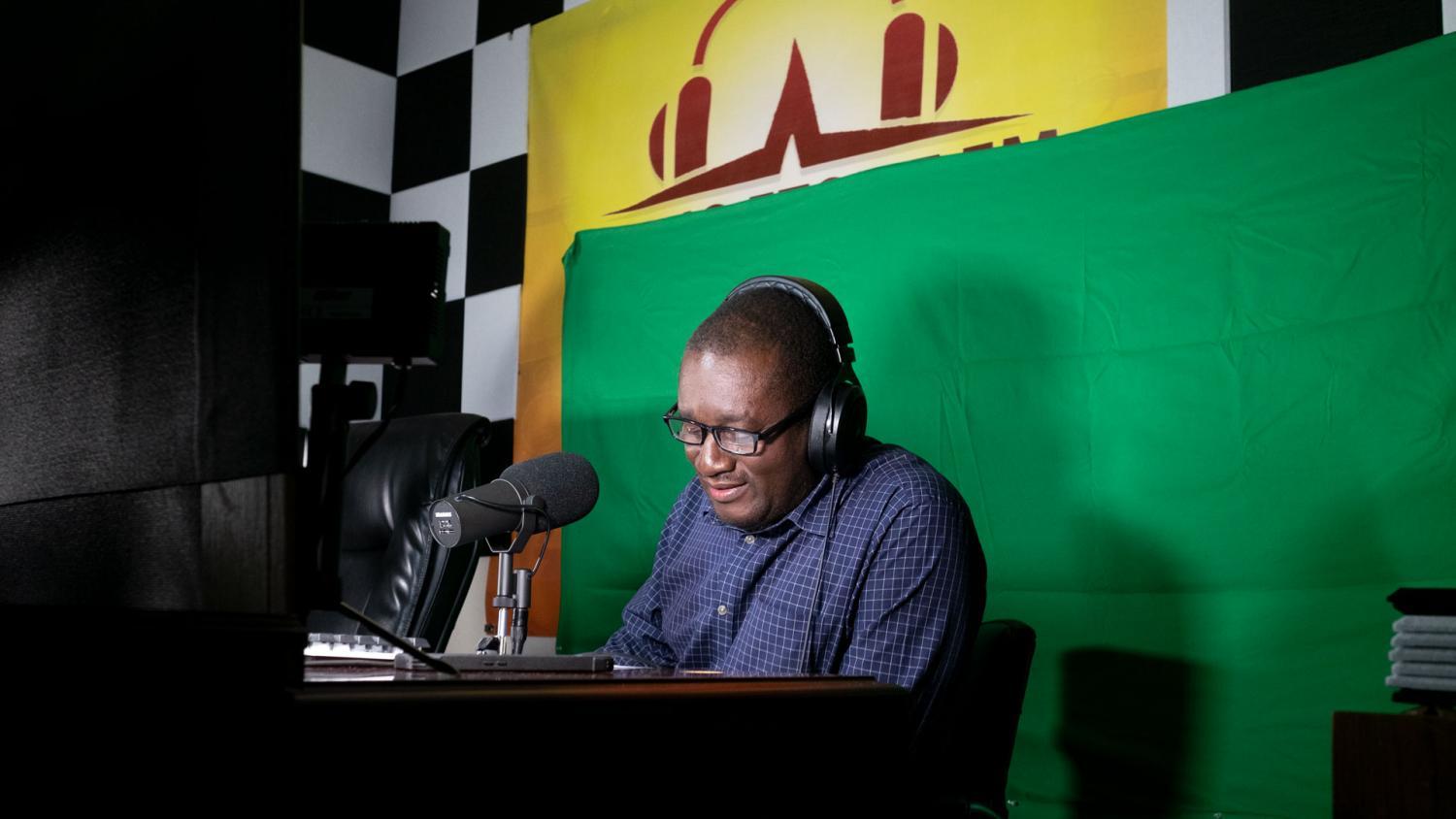 He’s a high school math teacher in Phoenix with glasses and a constant smile. When we meet at his school, students have been let out early for spring break. Montreuil is already on the phone with a Haitian woman he's helping get settled here.

“I’m going to visit a couple of clients today,” he said. "The first is a couple, they arrived in October.”

Montreuil’s from Haiti, too, but he’s spent two decades in Phoenix. Now he helps newly arrived Haitians with everything from money transfers back home to job searches. His phone is ringing, pretty much constantly.

It’s been a little less than six months since thousands of Haitians gathered under a bridge in Del Rio, Texas, seeking asylum. It followed a 7.2 magnitude earthquake outside Haiti’s capital Port-au-Prince and the assassination of Haitian President Jovenel Moïse.

“We are living in hell in Haiti,” Montreuil said. 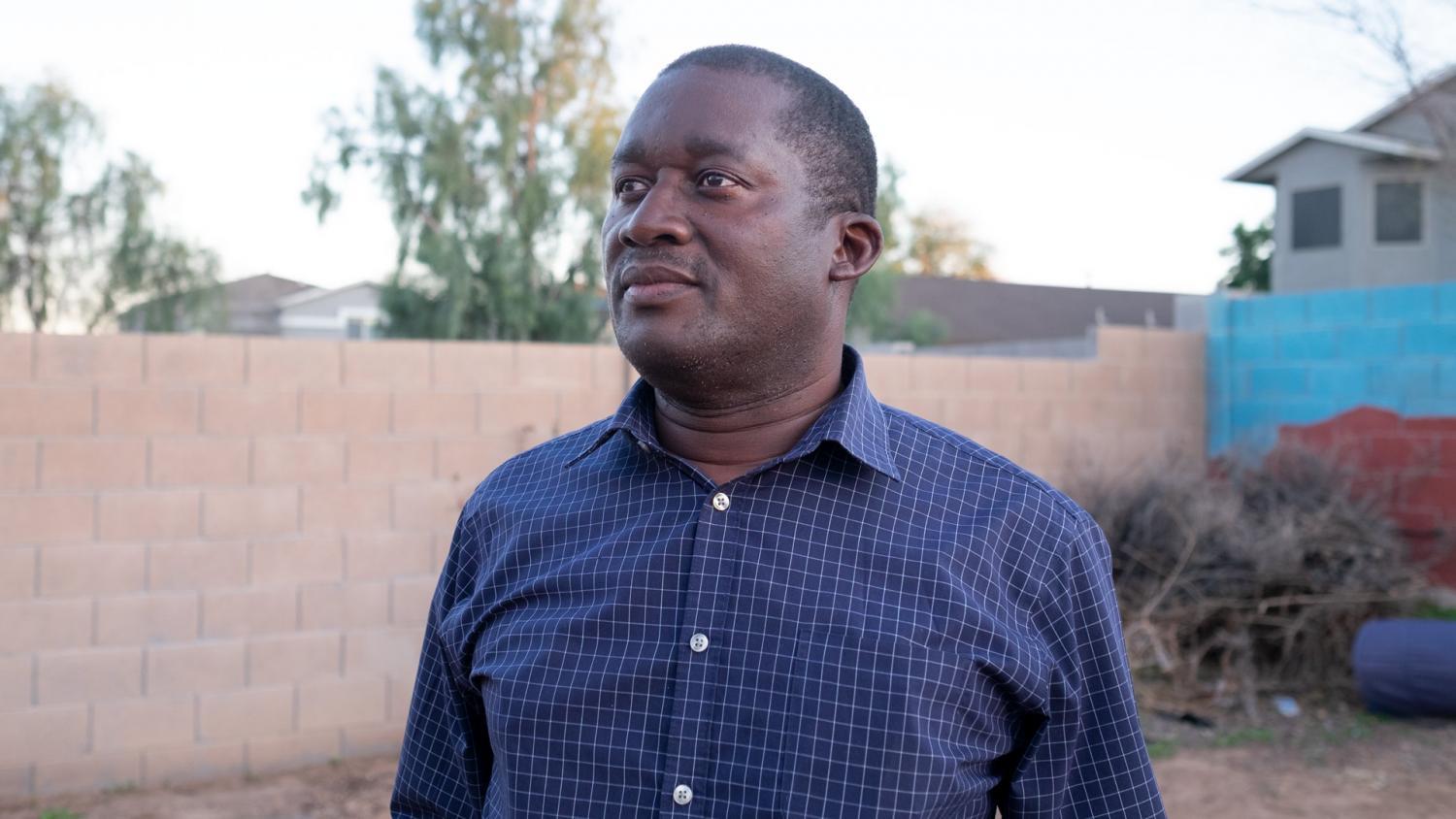 Alisa Reznick/KJZZ
Rodney Montreuil grew up in Cap-Haitien, Haiti and has lived in Phoenix for the last two decades.

Still, most have been turned back to Mexico, or Haiti, under Title 42. That’s the pandemic-era protocol that allows border officers to turn away migrants and asylum seekers on public health grounds. The protocol has been in place for two years this month. In response to a court order earlier this month, the Biden administration announced an end to the policy for unaccompanied children at the border on Saturday. But it remains in place for both families and adults traveling alone.

More than 20,000 Haitians have been removed — largely under the protocol — during President Biden’s tenure alone, according to the International Organization for Migration and the advocacy group Witness at the Border, which tracks removal flights.

Montreuil said this is only the most recent turmoil in his home country. People began fleeing long before 2021, often living in Chile, Argentina or Colombia before making their way to the U.S. Many have not been back to Haiti in years.

“They have survival skills, but they have a limit ... there’s a limit,” he said. “When they cannot anymore, the only rescue is to get out.”

Montreuil himself left in the early ’90s, after his mom told him she worried his job with the government there would get him killed.

“My mother used to say, ‘man, I would like to die before I got a call from the police that they found a body in the streets,’” he said. “That sounded so powerful, she used to say it all the time.”

A few years ago he watched from Phoenix as more political unrest and another natural disaster, Hurricane Matthew, ripped through Haiti. He realized many more people would soon make their way to the U.S, and he wanted to do something.

“It’s not just a Haitian problem ... or a refugee problem,” he said. “It’s an American problem, it’s an Arizonan problem.”

Today, he runs an organization called the Haitian American Center for Social Economic Development, or HACSED for short. It’s all volunteers, like Montreuil. And it’s how he ends up helping people all over the Valley — like Dieula Sainvil, young mother staying at a shelter in west Phoenix. 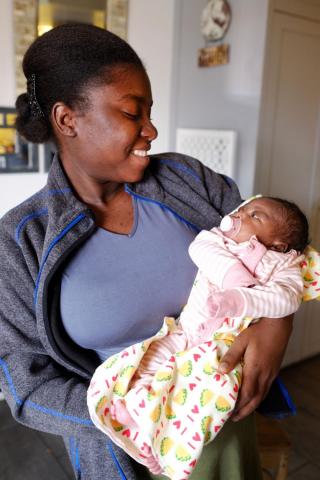 Alisa Reznick/KJZZ
Dieula Sainvil holds her newborn baby at a shelter in the west Phoenix area where she's staying.

Sainvil is 27, with tight black curls fastened into a bun with a sparkly barrette. Her tiny daughter, who was born in Phoenix just last month, was dozing off in a baby carrier and she cooked on the stovetop. Montreuil translated for her.

She told me she left Haiti after her father was killed by gang members in 2019.

“I am a daughter, and most of the time, sons have a tendency to seek revenge for their relatives, but I didn't see it that way,” she said in Creole. “I immediately envisioned getting out of the country.”

Sainvil said she spent a week in Brazil, then three months in Chile. Then, she headed for the U.S.-Mexico border. She and her husband arrived there in December.

He has family in Indianapolis and they'd planned to head there. But Sainvil says they got separated in immigration detention. Her husband is still there.

They have separate asylum cases now and she’s not sure yet if he’ll get to stay in the U.S. or, if he'll get sent back to Haiti.

“Life is pretty tough for my family in Haiti,” she said. “Most of them take a chance and venture into the Dominican Republic to look for jobs, and sometimes they face serious difficulties or maybe death.”

Montrieul hopes he can help answer some of the questions people have by talking about them on the radio.

Every Sunday, he records his weekly Creole-language program, Tikoze, or “Let’s Have a Chat” in English.

He talks about everything from immigration issues to how to file taxes in the U.S.

“This radio show informs, educates and entertains the Haitian community, wherever you are,” he said.

Josue Philistine, another Haitian who runs the station that broadcasts Tikoza, said that’s all over the world. They record and broadcast live on Facebook out of his living room. 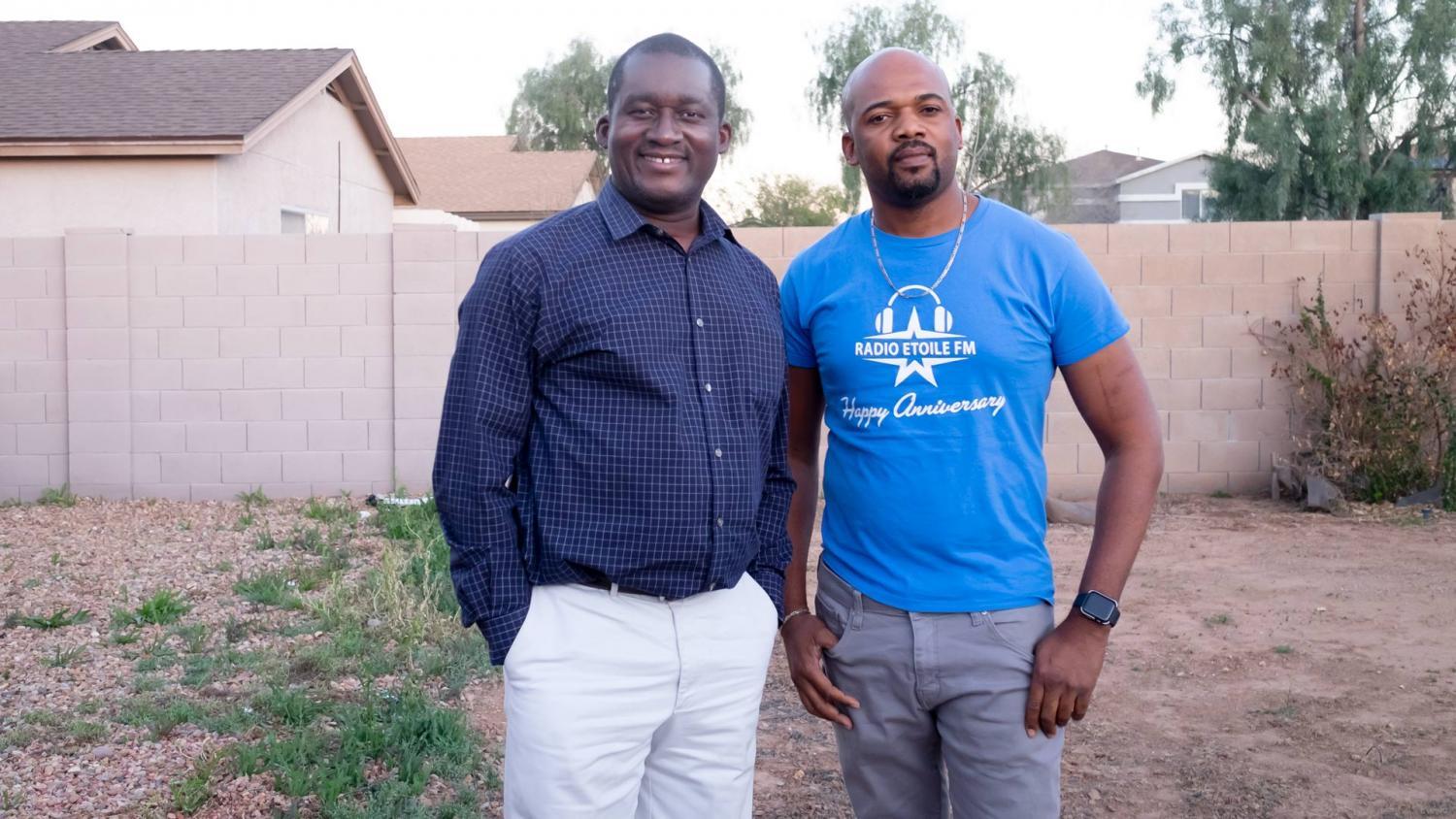 Alisa Reznick/KJZZ
Rodney Montreuil (from left) poses with Josue Philistine at Philistine's home in San Tan Valley. The two met when Philistine was in immigration detention in Eloy.

Philistine was the first person Montrieul sponsored to get out of immigration detention back in 2016. He lived with Montrieul for a while and won his asylum case a few years ago. He’s getting ready to buy his house in San Tan Valley now.

“Josue symbolizes what I hope my job significance will be,” he said. “I mean Josue is my hero, seriously.”

Montrieul says he knows he can’t solve all the issues Haitians are facing now. But he hopes he can be a helping hand to people, whether in person in Phoenix, or on the air.

EDITOR’S NOTE: This story has been updated to clarify removal numbers and the size of the Del Rio gathering. 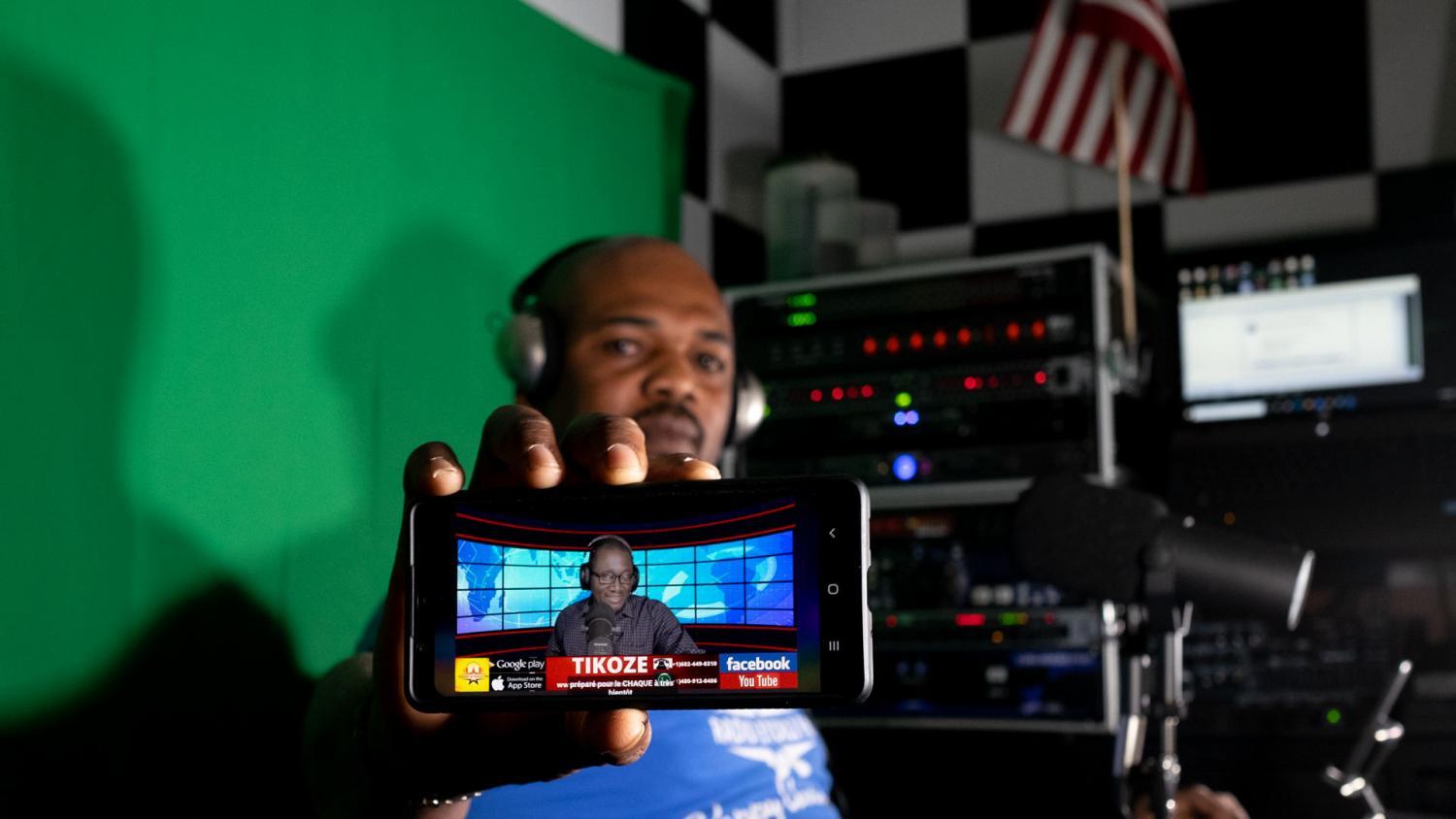