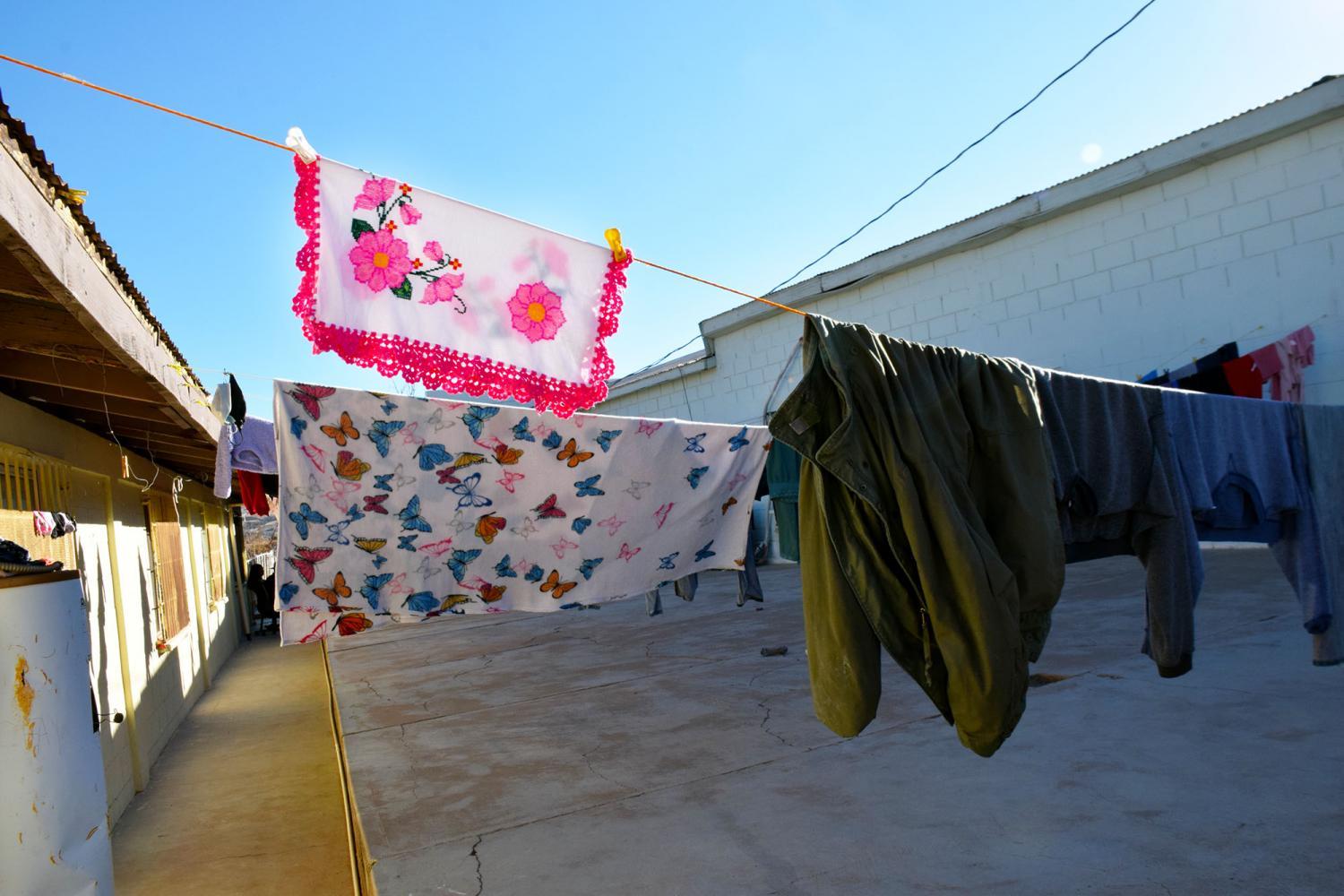 Kendal Blust/KJZZ
An embroidered cloth hangs on the line among clothing and blankets belonging to asylum seekers staying at the Casa de la Misericordia shelter in Nogales, Sonora.

It’s a warm, sunny afternoon in Nogales, Sonora, when Valarie Lee James steps out of her car at the Casa de la Misericordia migrant shelter — a two-acre compound built on a hillside overlooking the city, and in the distance, the U.S.-Mexico border wall.

Alongside the shelter's dormitories, gardens, school and kitchen, is what James calls the makerspace: a small room filled with sewing machines, yarn and stacks of embroidery hoops, where migrant women — and a few men — make traditional arts. They’re embroidering cloth and weaving clothing that they can sell in the United States with support from the binational nonprofit Artisans Beyond Borders.

“Look at this marvelous work Cecilia is doing,” she said, as Cecilia, an asylum seeker, unraveled the piece she has been weaving. “She’s done others, but you have to see this.”

Cecilia revealed a traditional garment in vibrant shades of yellow, red, orange and blue that she has been weaving on a traditional backstrap loom donated by artists in Tucson.

She sat down to begin working, and soon everyone was silently watching as she used long sticks to guide threads through the cloth. 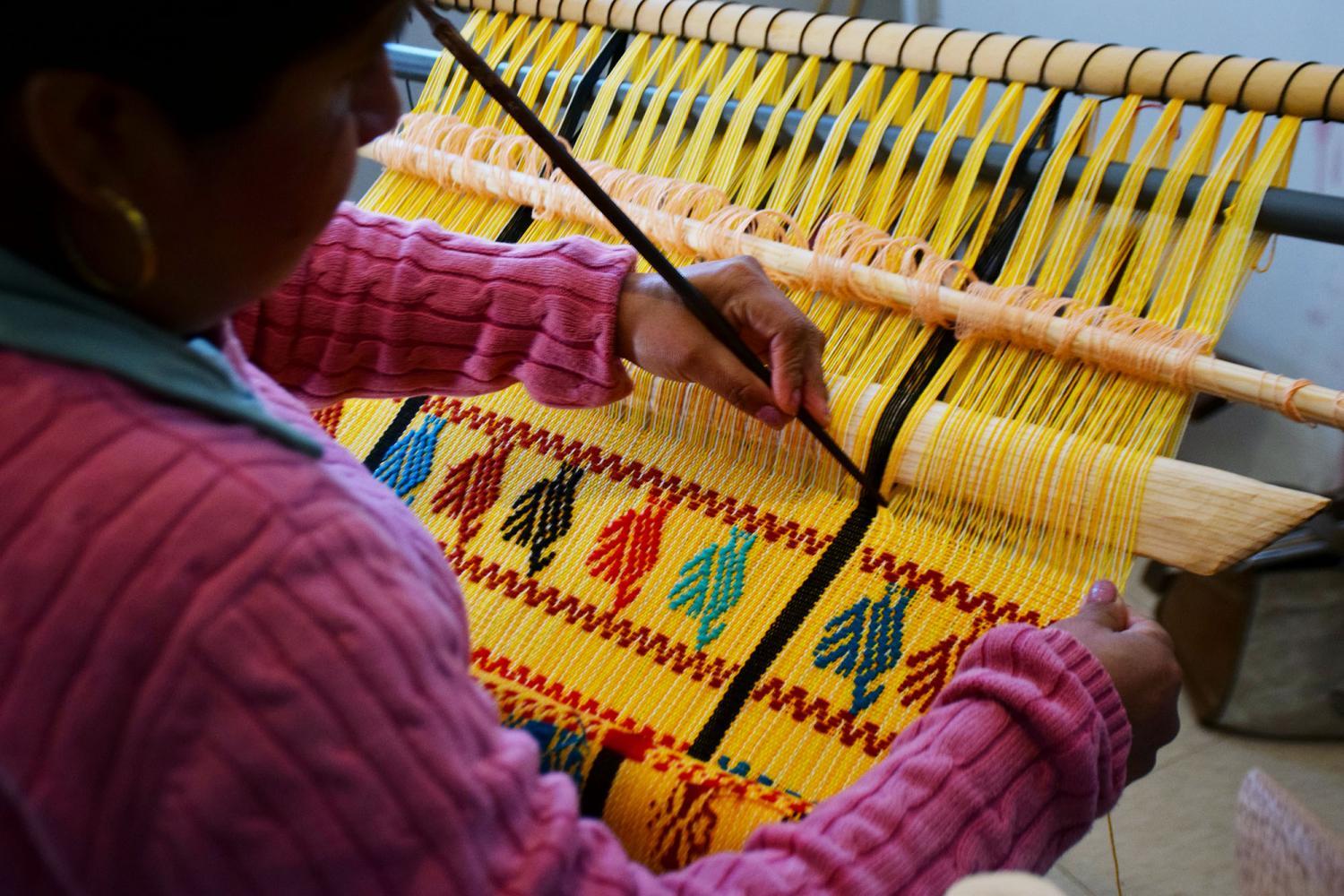 Cecilia and her three children fled their home in a rural, mountainous area of Guerrero, Mexico, last July.

“I’ve been waiting and waiting,” she said as she sat weaving. “I’ve been here for more than seven months. I asked for asylum but I haven't heard anything.”

Like so many others, Cecilia’s family been barred from asylum in the United States because of policies like Migrant Protection Protocols, or MPP, and a deportation policy implemented during the pandemic called Title 42, which closed ports of entry to asylum seekers and allows the U.S. to expel those who cross the border elsewhere. Together the policies have largely suspended the right to seek refuge at the U.S.-Mexico border.

We are calling Cecilia and other asylum seekers only by their first names for their safety.

“I cry every day since I arrived here,” Cecilia said in Spanish, though she primarily speaks Mixtec. “I haven’t slept well at night.”

The stress and uncertainty of what will happen to her family is hard to bear. She hopes to reach safety with relatives in California.

In the meantime, she’s been weaving.

“I like doing this,” she said, adding that she never had the chance to go to school or learn to read and write, but her mother taught her to weave. “I can sell these to earn something for myself and my children, and I enjoy it.”

In addition to helping her support her family, she said it’s been an escape from her many worries while stuck waiting at the border. 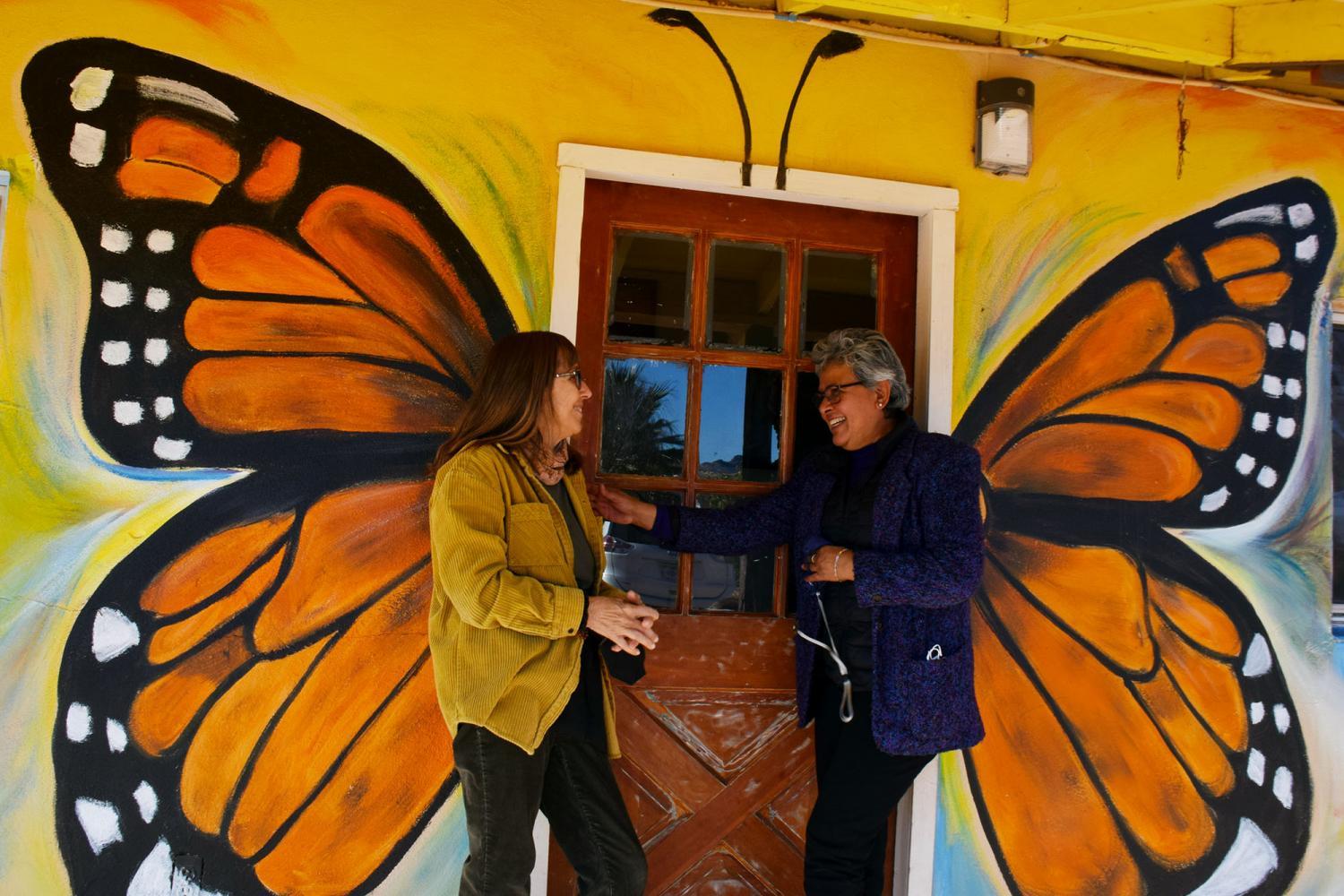 Kendal Blust/KJZZ
Valarie Lee James and Sister Lika, who runs the shelter, laugh in front of a mural at the main office.

The power of embroidery

That reprieve is part of the mission of Artisans Beyond Borders — also called Bordando Esperanza, or embroidering hope. James founded the group in 2019 as a ministry of the Grace St. Paul's Episcopal Church in Tucson.

“We started in the streets,” she said. “As volunteer arts facilitators, we went where we were needed. We went to the streets.”

At the time, the Trump administration was expanding MPP to cities across the U.S.-Mexico border. It forced tens of thousands of people seeking asylum in the U.S. to wait in Mexico, sometimes in deadly situations.

“And suddenly we had thousands of people in the streets because people could not petition for asylum,” James said. “It was terrible, and it was winter.”

Many of those waiting couldn’t find space at Nogales’ few shelters, where migrants have historically only stayed for short periods of time.

Artisans Beyond Borders volunteers began setting up card tables outdoors, and hundreds of migrants would gather to embroider traditional cloths known as mantas or servilletas, which are often used to wrap tortillas and other food.

James, an artist and clinical art therapist, has been drawn to the colorful cloths since the early 2000s, when she started to find them while hiking in the southern Arizona desert near Amado.

“We were increasingly, over the years, really haunted by what we found,” she said. “For us, this work was priceless.”

She called them precious heirlooms, carried among the few belongings migrants took with them when they crossed the border, perhaps stitched by a wife, mother or daughter.

“What’s amazing is that, all these years later, this work refuses to be silenced,” she said.

About 75 of those mantas are currently part of an exhibition touring U.S. churches and universities.

“It really brings attention to what’s happening at the border in a very kind of down home, personal, familial way,” James said. “This creative work stands in contrast to the politics of destruction that we hear so often about the border.”

Students at the University of Southern California in Los Angeles are arranging an exhibit now, then it will move on to Ohio, where Esmeralda — one of the migrant artisans who contributed to exhibition — is living. 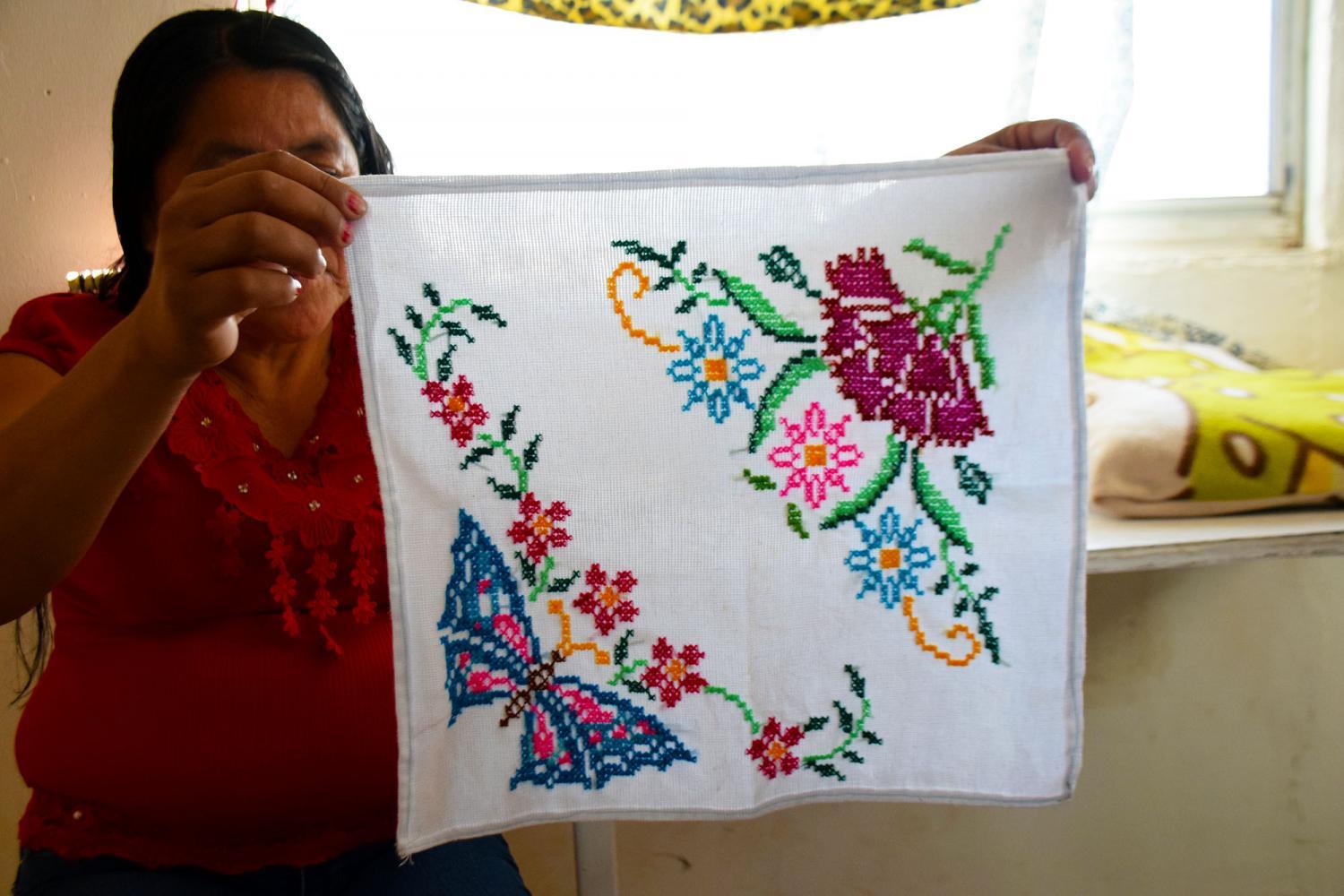 Kendal Blust/KJZZ
An asylum seeker holds up a manta she stitched at Casa de la Misericordia.

Farther and farther from home

Esmeralda learned to embroider during the more than 18 months she and her family spent waiting in Nogales under MPP.

Then, when Biden rescinded the program last year and began to allow people enrolled in the program to enter the United States, she was able to make it to Ohio with her husband and four children.

After Esmeralda and others were permitted to enter the United States, however, MPP was reinstated, and since December asylum seekers are again being ordered to wait south of the border.

“I am getting farther and farther from my home, from my people,” Esmeralda said. “I was scared when I was allowed into the United States. I didn’t know what would happen to me here.”

They are trying to make a new life in Ohio, with support from a sponsor and Artisans Beyond Borders. But it's not easy. Her asylum case remains unresolved, and she and her family do not yet have work permits.

So, she keeps embroidering, selling what she can at church events and through Artisans Beyond Borders. She’s even enlisted her husband to help her with the sewing.

“Pobrecito,” she said with a laugh. “Poor thing.”

But embroidering is about more than just making ends meet, she added. Esmeralda also wants people in the United States to see and recognize the work Indigenous women are doing.

“And when I sit down to embroider, I feel like all my sadness is gone. All I can do is concentrate on my work,” she said. 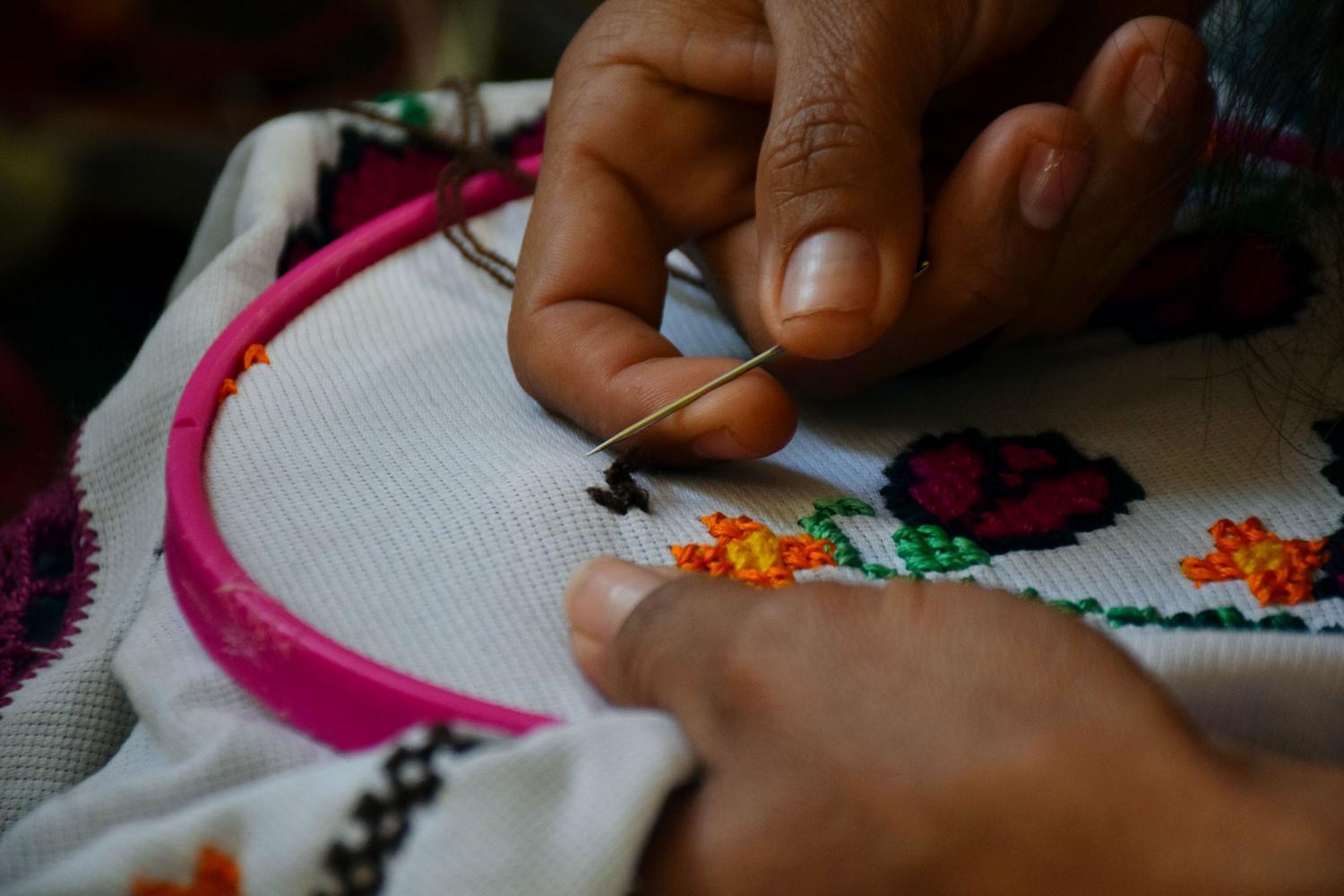 Kendal Blust/KJZZ
Evelia stitches a manta cloth that she hopes to leave at the shelter when her family is finally able to reach the United States.

That sense of escape is something many of the women still quietly stitching at the Casa de la Misericordia shelter in Nogales talked about.

“It really helps. It clears my mind,” said Evelia, a young mother from Guerrero.

She fled north to the border with her husband and three children last July after facing violence and extortion at home, she said.

Today, she’s embroidering a manta she’ll leave with the shelter when she is eventually able to reunite with family in Oregon.

Staying in Mexico isn’t an option for her family, she said, and after the violence they witnessed at home her children are afraid to go back.

“We can’t go back. And here, wherever we go in Mexico, it’s the same. The same danger,” she said.

So for now, she sews to speed the wait.

Kendal Blust/KJZZ
A young boy walks by dormitories at the Casa de la Misericordia shelter in Nogales, Sonora, where the sidewalk has been painted with the phrase, "We are all one family." 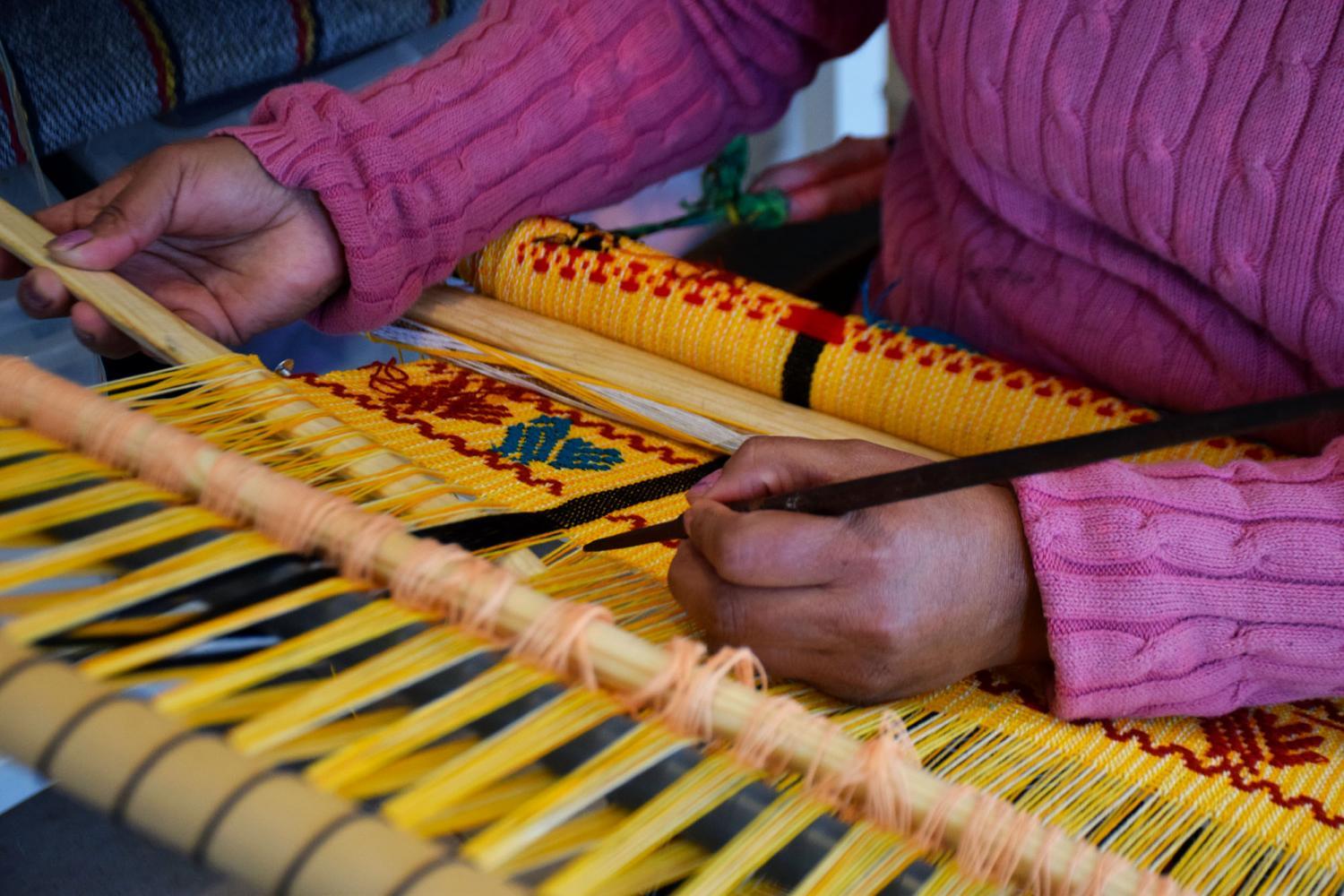 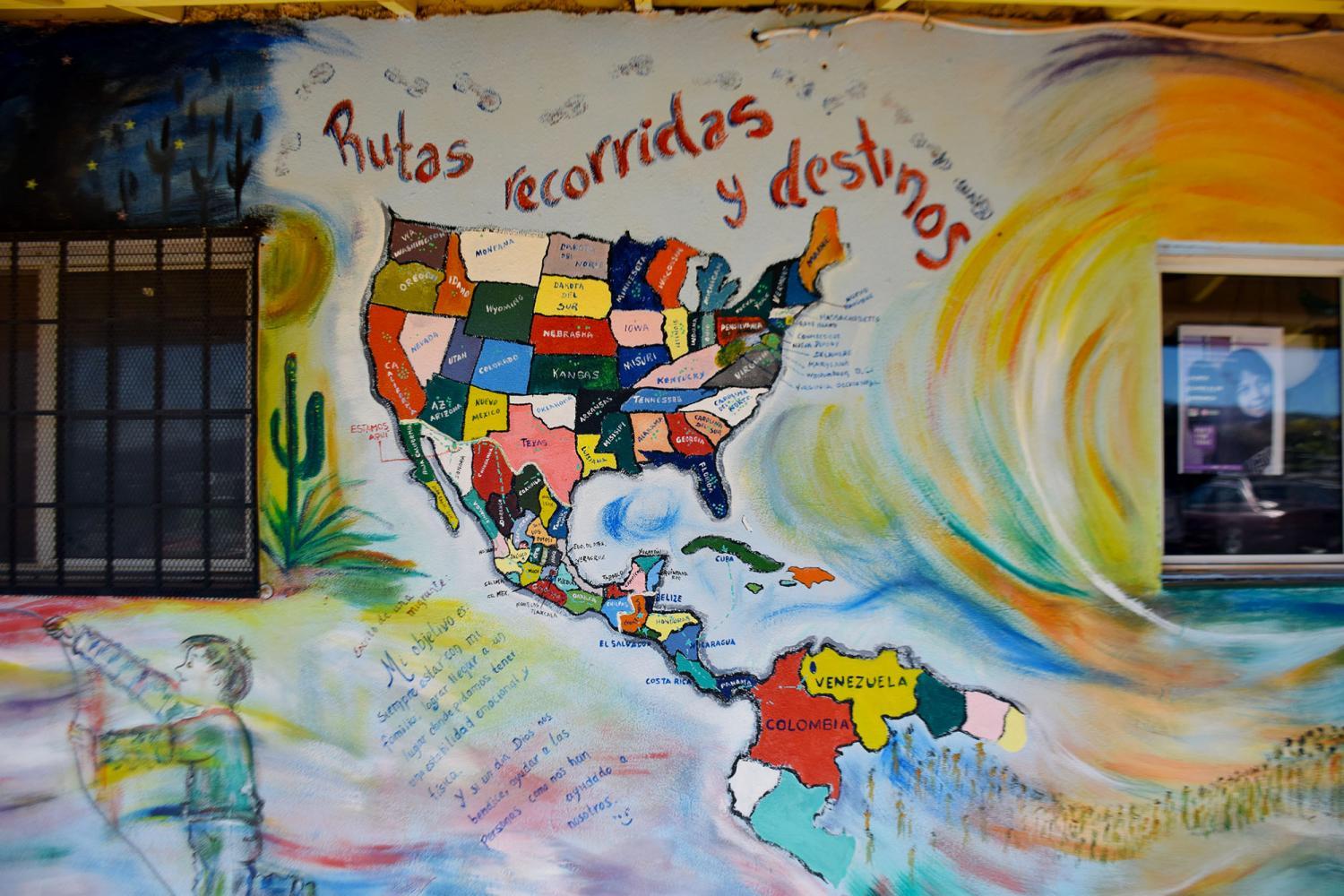 Kendal Blust/KJZZ
A mural at the Casa de la Misericordia shelter in Nogales shows people traveling from across Latin America and other parts of the world toward the United States. 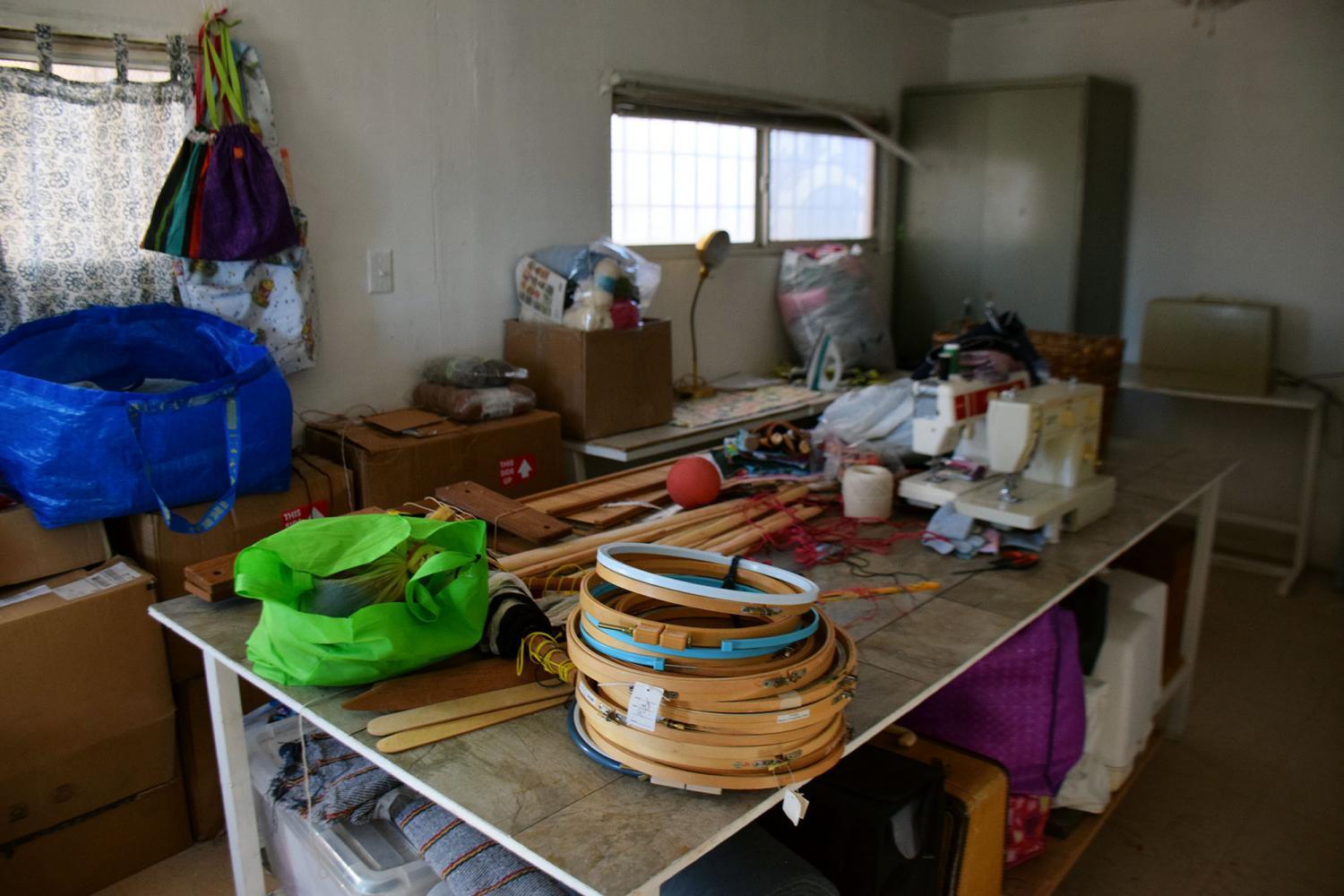